I can read readin', but can't write writin'

I was reflecting the other day (partly as I need more book shelves, partly as my ideas over my book are being formulated), what did we all do to learn about the World, before the Internet? We'll I for one read a lot more books then than I do now. The Internet is such a huge source of information these days (mind you a lot of it isn't that great) that if I need to look something up, or identify a small insect, plant or so on, I often use the web first.
And while I think this is not a bad thing, I just wonder how many teenagers today were like me and bought book after book on their latest hobby or interest. But then I was odd. Most teenagers I knew were chasing girls, playing "split the kipper" with very scary knives or lounging about in fields being bored and shooting things with air rifles. I did that of course, but I always came back to nature as my reason for living.
But like many others, I forget that even 10 years ago, the Internet was in it's infancy, 20 years ago no one really knew about it. In 1986 I got a job as one of a team of 12 computerising a large Central Library in the North East, and it was just the most amazing job, as my love of books was combined with new-technology. We had infrared keyboards, which was great fun as we'd fiddle about with the frequencies and when someone was working, intercept their work. A good old laugh, but we got the work done, and after 6 month I was asked to be a "Librarian". I had my own date stamp and everything, and stayed for 3 very happy years, before the call of the wild drove me to Newcastle University's Agriculture Department.
But what was I reading 20, 25 years ago? Being in the "book trade" I got to hear about all the new wildlife and related titles and bought everything voraciously, via a preferential scheme, 20% off, as well as from bookshops of course. So this morning I've had a very swift look at the BOOKS ONE HAD TO HAVE in the 1980's. I thought I'd share some of these with you, it's been fun looking at them again in the 2000's. They're a bit dusty though (click on a photo to enlarge). 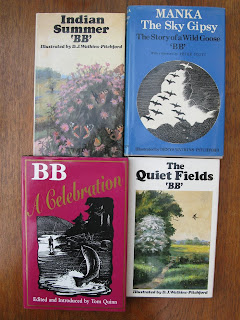 Starting with BB. For me the most important influence on my life. Classic Poacher turned Gamekeeper, he like Peter Scott and others realised the world was fast changing, and conservation was the future. He did great work on the Purple Emperor butterfly, although these days his methods would be condemned. But in his time, a great conservationist. 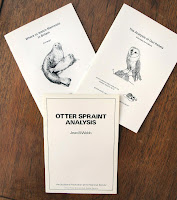 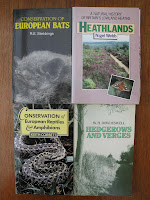 I was a member of the Mammal Society in the 1980's and bought many a learned pamphlet. Mustelids (Otters, Badgers and so on) are my real interest, particularly Otters as for a few years I surveyed, trained up volunteers and just generally became obsessed, during the dark days when an Otter sighting became national news. Wonderfully today they're back with a vengeance. 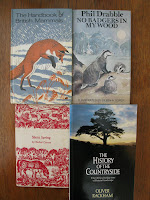 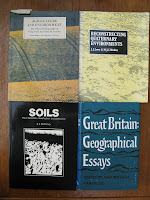 To really understand Wildlife, one needs to understand fully, the history of land use, especially in a country like the UK, where every piece of countryside is man made and managed, underlying geology, and therefore soils, hydro-graphic principles, aspect, and so on. The list is endless. But those books above have provided me with so quality reading. Oliver Rackams History of the Countryside is a must, as is Silent Spring by Rachel Carson, which while this didn't kick off the conservation movement per se, brought the mess of the post war years and poisoning of the land, to the public attention. 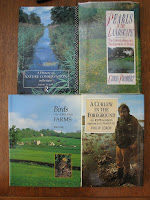 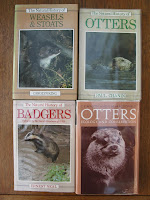 And these are just great reads, though I must admit, looking at my Otter books, I have too many really, I must have bought everything that came out. Mind you these Helm guides (on the right), although dated are still valuable tools.

Which brings me to my final story. I made a complete prat of myself years ago. I was at a Mammal Society Conference in Leeds, and was honoured to be having lunch with Ernest Neal, the undisputed Badger Man. Being a spotty overly enthusiastic 20 year old, I blurted out to a companion as a way of introduction, "this is the great Ernest Neal, you know the badger man, writes books and everything, he's great [sic]". To his credit, a reserved and true gentleman, he never batted an eyelid, but I could tell what he thought about me. But the lunch went off splendidly, and despite my gaff, I am truly grateful that for that short time at least, I was in the company of a great man.

Maybe one day I'll tell you about my first meeting with Sir David Attenborough, and how I nearly knocked him down the stairs.... but that's for another day.

Email ThisBlogThis!Share to TwitterShare to FacebookShare to Pinterest
Labels: books