Abandon hope all who enter here

Nature can both enrich and destroy. 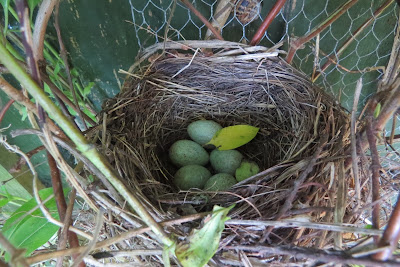 Today it's capacity for failure has been aptly demonstrated by the abandonment of the blackbird nest I wrote of recently. Two weeks ago I sat in the garden enthralled by to-ing and fro-ing of the female blackbird building a nest in the garden. Two weeks ago the promise of new life into this corner of Somerset was all around us. Today after not seeing any activity in the garden or around the nest by either the male or female blackbird I checked it with my camera on a pole - 5 beautifully marked eggs but no bird. I gently felt the eggs, stone cold and they plus the nest were soaking wet after the frost we had last night. Having not seen the female around the nest for 4 days now, I fear that's that. There will be no new life in this corner of the West Country this year.


In a way I'm not surprised, just saddened. On Tuesday, the last day I saw the female an unknown black cat had come into the garden and was looking up at the nest hidden in a clematis. It then walked along the fence the clematis is attached to and peered in before leaving the garden following my protestations. But I have often seen this and another cat in the garden by the bird feeder. Was she killed by a cat maybe? I can't say the cat had anything to do with the abandonment but the female blackbird was especially tame and would hop around the garden while we worked in it. She'd happily fly into the nest too seemingly unaware we existed. Too trusting possibly?
We also have regular visits by magpies and carrion crows, in fact a crow has just arrived on the shed as I write this, all sleek and glossy, a killer king in a black mantle? Maybe but often they would rob the nest of eggs, rather than attack the parents. The eggs are still there, cold as stone, jewels hiding their macabre story of abandonment. We do have a regular sparrowhawk too, but there is no evidence of blackbird remains. Why then the nest was abandoned? I just don't know.


I've long loved nests and eggs. Since a child that joy of discovering a nest and peering carefully inside to see perfectly formed spheres of creation. In many ways finding nests in the winter is just as thrilling. I remember discovering a long tail tit nest in a dense blackthorn hedge in the middle of a snowy walk in December. That beautifully crafted tennis ball dome stood out as a reminder of warmer days which felt a lifetime ago. Gently pushing my finger inside the dome I could feel the soft interior, which possibly housed ten or 12 pompoms of life all squeezed in tightly vying for space as the warm spring sun warmed within.


Rooks nests out of season fascinate me too, they look so precarious on the outer branches of trees, just a ragtag and bobtail structure of sticks swaying in a winter storm; but no matter the weather they remain relatively undamaged all through the year often to be repaired and used again in the following March. Even in the height of nesting season, winds can whip the trees into a flagellating frenzy but the nests remain; although in severe gales at this time of the year young can be hurled to their death below. The illustration below from The Collins Guide to Nests and Eggs I have mentioned before fascinated me as a child as it simply illustrates the differences. Rooks, social and build on the very edge of the tree, which is of course why the nests are stable as the branches are a vertical foundation structure to the nests. Carrion crows build lower down, singly and usually in the more stable Y or fork of the branch - their nests being more of a platform. And magpies. I love magpie nests one of the few instantly recognisable nests with it's mezzanine floor above the main nest to protect eggs and young. 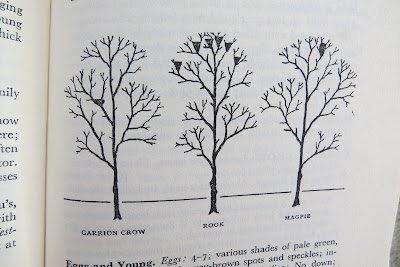 The complexity of nest building in the birds world is fascinating, and all from a beak and a bit of avian design flair. Not all birds build nests of course, the cuckoo just pops by like a difficult older sibling while you're out, raids your nest, leaves a present you didn't really want and disappears until next year. The guillemot and many other seabirds just lays an egg on a rock, the egg itself is the wonder, designed to roll around not off the cliff face. But as with the unhelpful term seagulls to describe anything white and flying along the coast, the term nest fails to enthral the casual observer.
Rightly nests and eggs are protected by law from destruction, harm or wilful disturbance during the breeding season, I only checked this nest being certain it had been abandoned and after days of discrete distance observation. But later in the year when rebirth has been completed on that country walk, if you find a nest, stop and take a closer look at the miracle of its building, it's form, structure, shape and function is unique. As is every species' nest.
All is maybe not lost. As I sat here writing this memorial to avian abandonment a dark shape caught my eye. It is a female blackbird carrying nesting material from the garden and over the wall into a shrubby area next to the lane. In the time it has taken me to write this she's been back and forth half a dozen times. The male blackbird is perched on a shrub beside where this female is flying in and out of. To be honest this female looks darker than the one nesting in the garden who had a distinctive pale ruff across her chest. Is this male blackbird one with female blackbird 2? Only one thing for it, to stop writing this, make myself comfortable and as all naturalists do, sit quietly and observe.
Observation is what enriches our understanding of nature, and, maybe there will be new life in this corner of the West Country this year after all.
Posted by The Wessex Reiver at 09:07 2 comments:

The beauty of blackbirds

As I write this posting a female blackbird is wearing herself out building a nest in the garden. I've been in Northumberland for a few days for work and pleasure (sat in the garden of our house there watching more greenfinches than I've seen in years - the males almost lime green in their breeding plumage) and have returned to witness the building frenzy of a blackbird in our clematis. Blackbirds are such wonderful birds.
On Thursday I stayed in Julie's house in the Northumberland National Park and having a quiet half hour sitting looking at the stunning view of the moorland which is just the other side of the fence, I was joined by a very friendly female blackbird. I had some Aberdeen Angus sandwiches with me so threw her a morsel. That was gratefully accepted as were the other half a dozen beef crumbs. It was fabulous to be accepted by this animal and although we had never met, she accepted my presence and I felt a bond developing. She'd chink chink, I'd throw a bit of beef, she'd land and take it, fly off to the fence, and the whole process began again. To my right a neighbour feeds the birds and there were a couple of dozen sparrows, chaffinches, the aforementioned greenfinches, cola tits, blue and great tits and a pair of courting dunnock who entertained me with their mice like run and hop pairing behaviour. Beyond the field a woodpecker drummed and a raven cronked overhead.  Absolute bliss. A man needs nothing else. 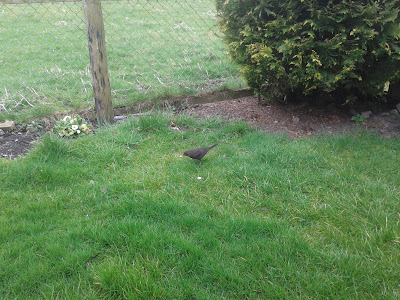 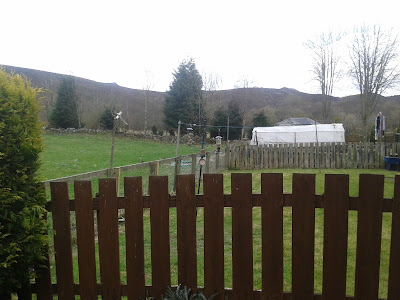 Our neighbours garden and the feeder with Harbottle Crags beyond. 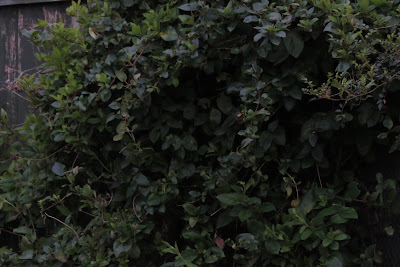 But back to the main story. This inconspicuous piece of foliage hides the beginnings of new life, or will do so soon. On Saturday morning I kept seeing this female blackbird on the lawn but couldn't see where she was going. Armed with a pint mug of tea I watched her. And to my amazement into the clematis she flew, then again two minutes later. I had a quick look from a distance and sure enough a half saucer of dried grasses was beginning to be built. Fantastic. We worked in the garden yesterday and she made no attempt to avoid us, in fact she just ignored our activity often flying over our heads to get to the nest construction site. Once again I'm amazed at how nature is trusting of us humans if we just leave them alone. 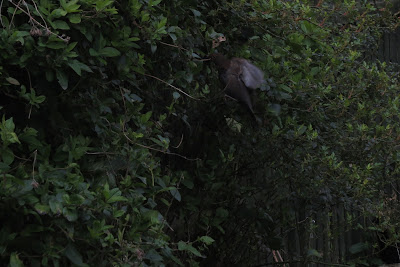 Having the camera to hand I tried to take some telephoto shots of her activity. They sort of work but it was a dullish day and so getting the ISO levels high enough made it a bit grainy. But a nice sequence of images nonetheless. 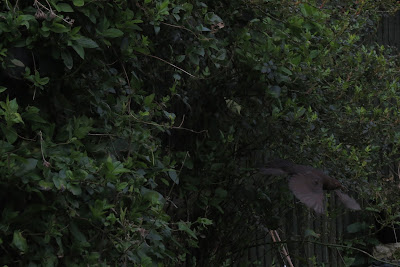 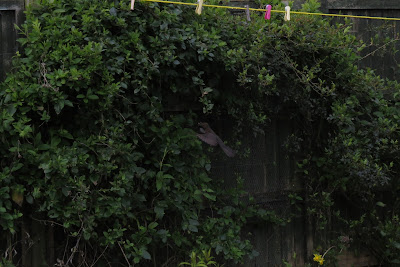 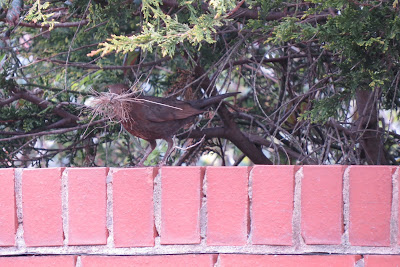 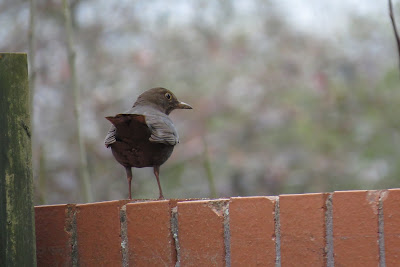 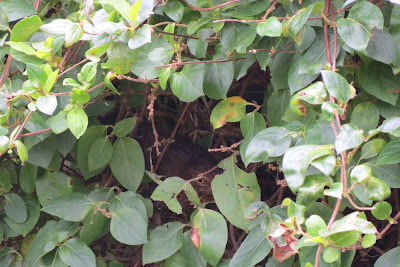 I like this shot as it was as she was about to leave so just caught her. 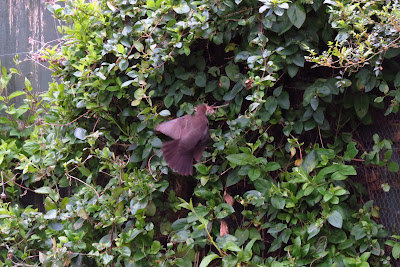 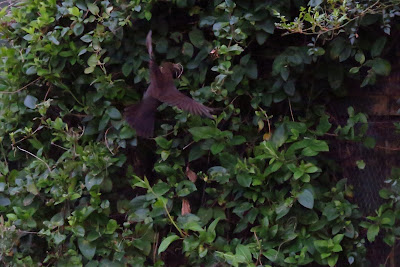 Watching her antics for an hour is one of the most enjoyable things I have done for a while. On average she came to the nest about every two minutes. Between nest visits, hopping over the garden wall to a bit of unkempt land behind which is full of straw, grasses and twigs. I could almost predict her behaviour.  Out the nest, perch on the wall, a quick cheep then drop down the other-side. Two minutes later she'd land on the wall, beak crammed with nesting material, hop along the wall, drop down onto the grass, then fly up into the nest from there. Often she was only hidden by the clematis for 20 seconds then out she'd fly, onto the wall, and away we'd go again. Occasionally the male appeared, sang a short 'pink pink' refrain and then flew off somewhere. He'll be watching her somewhere out of sight but for the moment keeping out of the hard work.
I've left her to it and will keep a close eye on the next phase which will be lining of the nest with mud before the final soft grasses are lain down prior to egg laying.
According to my beloved Collin's Guide to Nests and Eggs, after laying, incubation by the hen is 13-14 days and fledging 13-14 days later. So by my calculations if the nest is finished next weekend, we should see fluffy blackbird chicks in the garden by the first week on May... can't wait.
Posted by The Wessex Reiver at 12:52 2 comments: