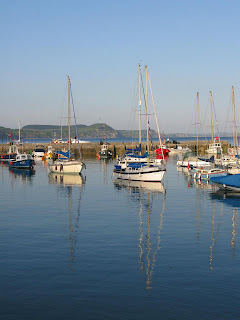 I've decided to start this posting with an unrelated picture. There you go, Lyme Regis last night. Strange day yesterday, which ended in me taking a good friend of mine to Lyme for a picnic in the evening. She's been going through absolute hell recently with one thing and another, so partly as it's her birthday next week, partly a glorious evening and partly she needed sun, sand and....de-stressing (we're just friends before you ask), off we went and had a glorious 6 hours down there, not leaving until well after 9am. I just love Lyme Regis, and it was a super evening which did the relaxation-trick for her, even if I'd over filled the cool-box with comestibles and it weighed a ton!!

Anyway on with today's posting. Rising at the crack of 9am, unheard of for me, normally up at 5am I thought I'd have one final hunt for this Glanville Fritillary. What with one thing and another didn't get there until 11am, walked up to the trig-point and just about the scan the slope when half a dozen unfit middle aged men, who quite frankly should have known better, began running over the slope like school children. "it's there, it's there" they kept shouting. Being as sharp as a parsnip, I knew exactly what they were doing, so this middle aged man ran like the wind to see what's happening. I AM NOT AS FIT AS I THINK!! 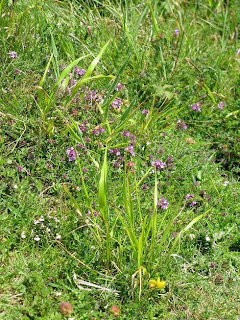 I stood there puffing like a train and said, where is it (I'm not one for introductions)... a man with a camera the size of a small house said there..... and there it was, on the Wild Thyme. Well slap me vitals with a small lettuce, at last a Glanville Fritillary. I have to admit if they'd not been there I'd probably not seen it, and I can not give you any photographic evidence, as just as yours truly whipped out his camera, it flew off, landed, flew off again and then wasn't seen again. Damn!!

The chap with the camera had some stunning views though, which we all Ohh'd and Ahh'd at., looking back should have said can you e-mail these, but hindsight is a wonderful thing. I later found out all these men were unrelated. No I don't mean as in in-breeding, but that all happened to be on the slope independently and hunting his nibs, most from north or Bristol and Birmingham, one from Taunton. The photo above shows where it was (honestly, apparently it was a worn specimen!), and the photo below, what it was feeding on, Wild Thyme. 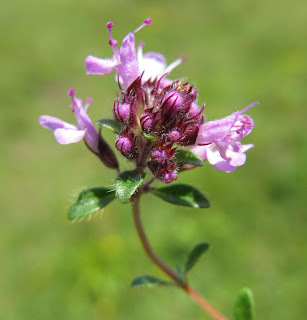 Thoroughly subdued, I went off in search of something else. And boy did I get something else. those of you under 18 or of a nervous disposition should avoid the next section..... copulating Common Blue's... the original Blue Movie?? 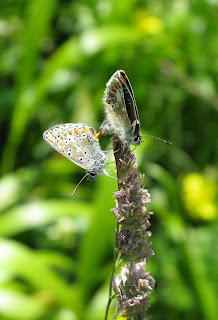 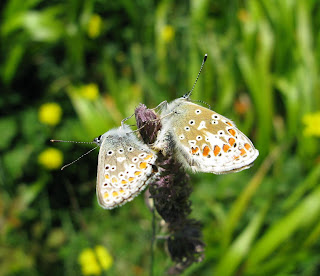 They were so engrossed in what I can only describe as disgraceful behaviour on a Sunday morning, even my trying to hold the stem still in the wind to get a better photo didn't stop their antics. But what a piece of behaviour to behold... made up for the unfulfilled Fritillary I tell you. 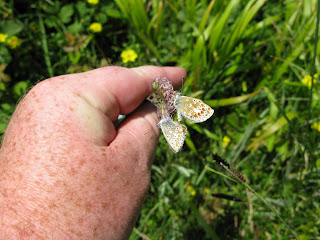 I have to say the remainder of the stroll across the slope was quite quiet, although I did (I think) briefly see a flying female Cuckoo, it shot past me when I was looking at something else and so I failed to get the bins onto it, but pretty certain by the profile. 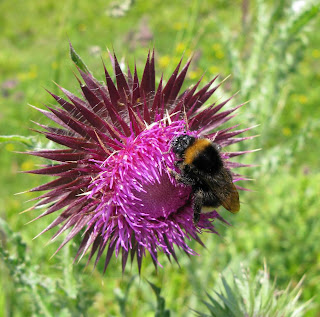 This Buff-Tail Bumbler on a Musk Thistle was nice though, as was the Clouded Silver, below and another Large Skipper below that, and lets not forget the White Campion below the skipper. 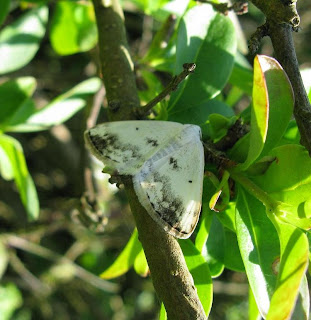 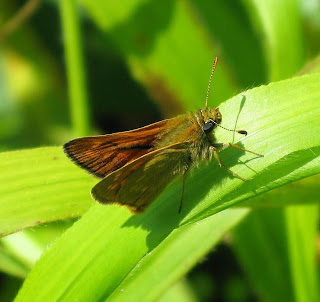 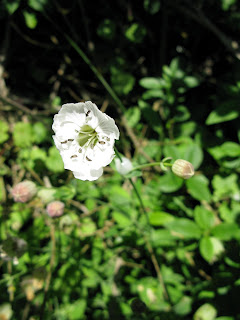 Oh well there was nothing else to do other than return to the car, which just happened to be parked next to an ice-cream van..... absolute joy on a hot summers day!! 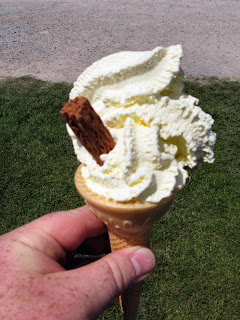