Inside A Ring Of Peewits.

"It is not spring yet. Spring is being dreamed, and the dream is more wonderful and more blessed than ever was spring."

Spring may be knocking on the door, but in recent days, as a result of a dominant high pressure system over Scandinavia, blistering easterly winds have buffeted Britain from the Continent. Add to this sub zero temperatures (Braemar in Scotland nudged minus 23oC) and, despite snowdrops peaking through the ground, a late blast of winter weather has enveloped the country. Most of the country has had a covering of snow, but here in Somerset despite the odd flurry we've remained snow free, the skies predominantly blue and the countryside bathed in sunshine.
Working at home this week I've spent a lot of time looking out of the window while having the obligatory screen breaks. I've had a lot of birds come to the feeders, the colder weather always increases usage. A great spotted woodpecker was a highlight, but I love seeing the boisterous sparrows and starlings fighting over the fat balls. The resident great tits are looking fantastic in their fresh olive-blue plumage, seeing them next to blue tits on the same feeder, the size difference is obvious. I also have a resident male blackbird with no tail, which I've imaginatively called stumpy.  It is his garden and the interloper males are given short shrift if they dare to enter, post skirmish he'll tik-tik away on the shed roof in an avian triumph.
It's not just the garden where activity this week has increased. From the house I can look over two miles of small grassland fields to the National Trust's Sand Point and then the Bristol Channel beyond. Skeins of geese often use the Bristol Channel as a land-map, mute swans too, and in late afternoon gulls fly past going to roost on Flat Holm island. But it was while casually scanning this area with my binoculars  I noticed three sizeable flocks of lapwing wheeling over the Point. Each flock was maybe one to 2 hundred in number. After a few minutes the flocks merged and dropped out of sight. We're lucky here as lapwings in winter are quite numerous. A drive north up the M5 from Weston super Mare guarantees sightings of lapwings in the adjacent fields, and only a few miles away the Somerset Levels are a favoured location. But those birds seen over towards Woodspring Priory were in greater numbers than I'd seen for a long time.
From home it is about a 2 mile walk to where I'd seen the flock, which seemed much longer in the biting wind whipping across the flat sea-blown fields around here. Only field hedges curtail these blasts which, as anyone who has stood motionless birdwatching in winter knows, I was inordinately thankful for.  At first I could not locate the lapwings. I counted about 30 mute swans, many many rooks, carrion crows and jackdaws in the fields and a solitary song thrush. Then rounding a corner I heard the first pee-wit call disappearing in the breeze, along with the birds. I'd spooked them unknowingly. 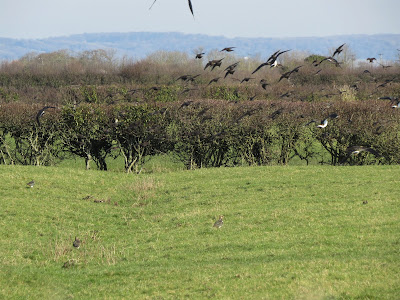 I wasn't unduly worried as lapwing are what I call a fidgety bird.  Individuals and groups will nervously fly up and down to the same spot while foraging or resting, sometimes the whole flock takes off for no reason only to return a few minutes later as if nothing had happened. But this flock was different. 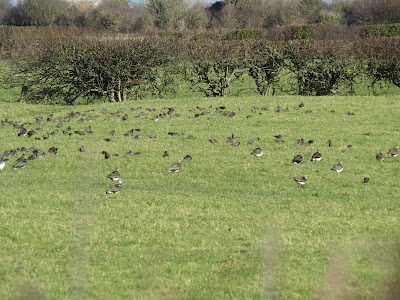 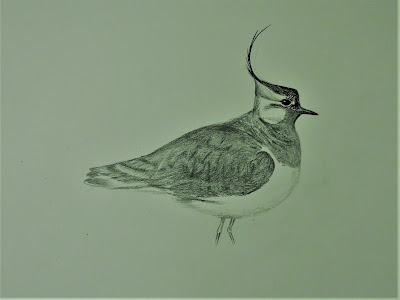 Quote "It is not spring yet"

Lapwing illustration by Denis Watkins-Pitchford from;

Posted by The Wessex Reiver at 15:45 No comments: