The final triptych of weekend postings 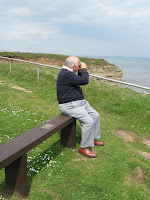 Sunday mornings are for listening to the Archers, so while doing that finally a brief posting of the short trip to The Leas, South Shields last Thursday. The other 2 postings are below. My trip up north last week was last minute, and I'd hoped to have a day at the Farne Islands, and take my parents who after 70+ years of living in the North East, have never been. However one thing and another stopped this happening, so on Thursday morning I consoled myself with a hour on the coast at South Tyneside. My father above looks happy anyway with the change. 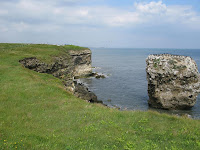 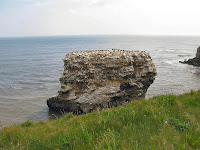 Above: Can there be a more accessible seabird colony? The carpark is opposite the stack (click on any image to enlarge for a better view)

Before moving south I used to be involved with Souter and the Leas when it became part of the National Trust portfolio, and it gave me a bit of a start when I realised it's 21 years since the land was handed over on my 23rd Birthday. I was fortunate enough to be part of the transition of the Lighthouse from Trinity House to the NT, and in 1986 was allowed access to the lighthouse while it was working to take photographs and record the change. This included being allowed up in the tower while the prism was working which was fascinating as it revolves on a mercury bath and I think only a 60watt light bulb, and hearing the foghorn blow for the last time.

Something I'll always treasure, that unique access to a dying piece of British Life. I was amazed that although the Lighthouse was on the mainland, the keepers had to remain there for 2 weeks at a time, as if they were off-shore. One other piece of trivia, Souter Lighthouse is on Lizard Point, but because of the more famous Lizard in Cornwall, could not be named so. 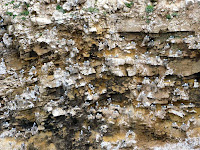 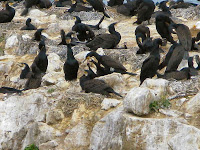 Kittiwakes on the stack (L) and Cormorants feeding chicks (R) 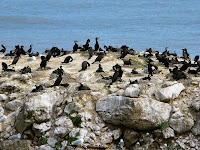 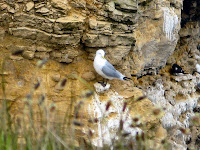 Above :Cormorants (note egg) (L) and Kittiwakes and Razorbill (R)
Below : Razorbill with Kittiwakes (L) and Fulmar (R) 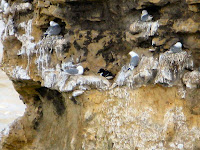 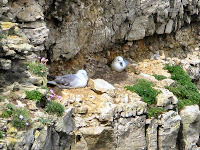 The whole area is vital for Seabirds, having long been one of the top seabird colonies in Britain, with Marsden Rock a Tyneside landmark. However in 1996, half of the rock, actually an arch collapsed due to frost action penetrating water in deep cracks. Since then the seabird colonies are spreading along the coast, not least as with the removal of pollution in the Rivers Tyne and Wear, the sea here is now teeming with marine life, allowing more and more wildlife to be enjoyed by the huge Tyneside population, right on it's doorstep. Sometimes down there, it can be more like the Mediterranean or Cornwall than Tyneside. Mind you not quite as warm!?! 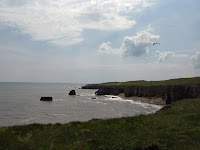 Kittiwakes are the main attraction, who also can be found nesting 10 miles inland along the River Tyne. This visit though picked out a handful of Razorbills. Just after the NT took over the area, I was rung by Peter Collins the NT Warden at the time to say one was nesting on Marsden Rock on the seaward side. We went out on a rowing boat in less than ideal conditions to try and photograph it. I did, but it's wasn't anything like as easy or as clear as those I took today.

Speaking of Peter, I produced a lot of slide photographs for him/NT for talks etc (seems like another era talking about slides, what with digital technology and laptop presentations but it was only 20 years ago). He rang me and said there's a Bee Orchid on the Leas can you come and photograph it. We wandered across the rough grassland for 20 minutes and I remember him saying, it's odd it was here this morning. In horror I looked down as he moved off, we'd only gone and stood on it!! The NT's Enterprise Neptune campaign was in fill swing in those days, with the 500th mile piece of coast being the purchase of the old coalfield coastline near Easington, which Peter also managed before Dennis Rowney took over. Happy Days but a long time ago now.... 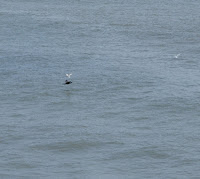 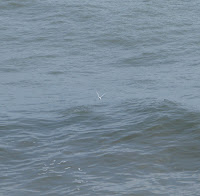 Closer time wise were the birds of the area last week. Above were a handful of Sandwich Terns which were hunting over the sea, and fortunately a Cormorant flew by to give a size reference to these big terns. And I can't leave out the Jackdaws or Oystercatchers. The former are here all year and give wonderful photo opportunities, this one against the Thrift. I think with Kittiwake, Razorbill and Sandwich Tern my year list is now 146 species, but to be honest I've lost track. Hopeless!! I never was any good at detail. 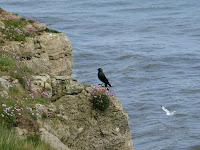 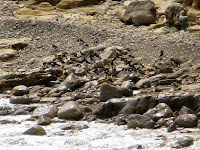 You see Tyneside is no longer flat caps and whippets. If you haven't visited before, treat yourself to the wonders of the North East, but remember to take a Gansie (wooly pullover) as the wind is awwer brisk off the sea.

Email ThisBlogThis!Share to TwitterShare to FacebookShare to Pinterest
Labels: Marsden