August : I feel the Quickening arrive.

The seasons move the sun is still hot but mornings can be decidedly autumnal. And so it felt while out photographing the landscape project in early August. That rustle of leaves losing their suppleness in the trees, the absence of screaming swifts across the fields, colours changing as an airbrush of Naples Yellow spreads behind the harvest machine.  Red berries, apples ripening and the season of bounty is upon us. Enjoy, for the seasons darken now as the back end swing into view. 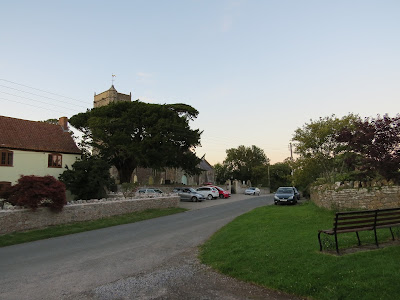 The village photographed at 8.45pm on August 7th, dusk before the watershed 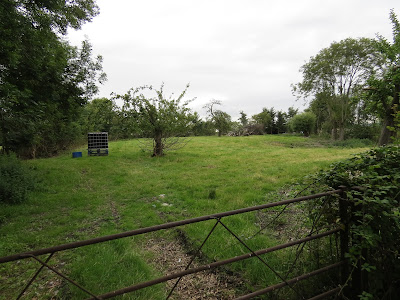 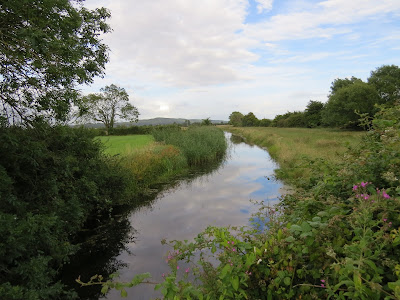 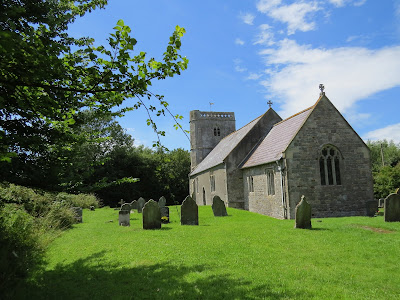 Hard to remember how bleak and forbidding this church felt back in January, warm and welcoming now. 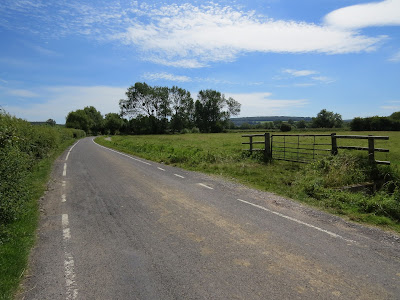 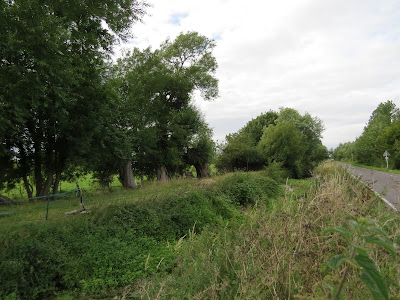 Chocked with vegetation and on the banks the signs of autumn are evident. 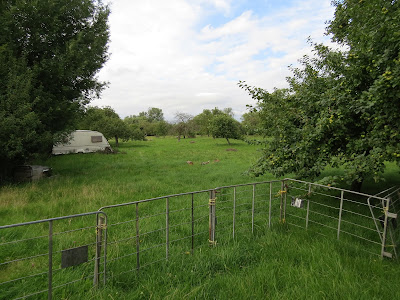 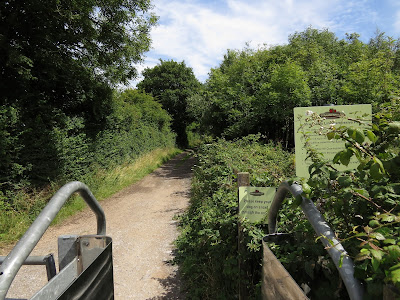 The Strawberry Line style has been cleared a bit 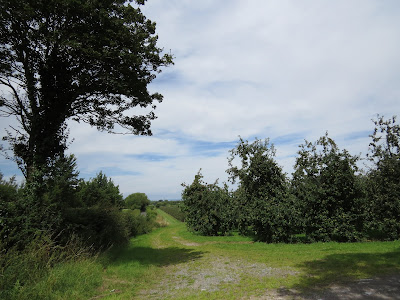 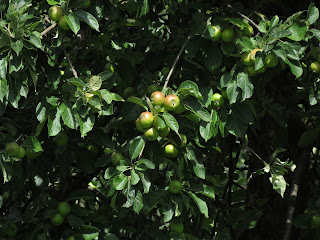 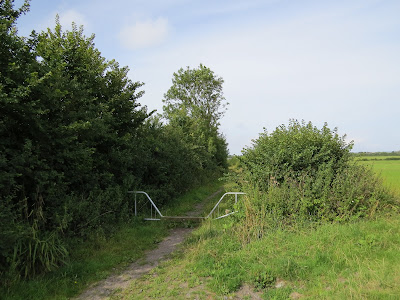 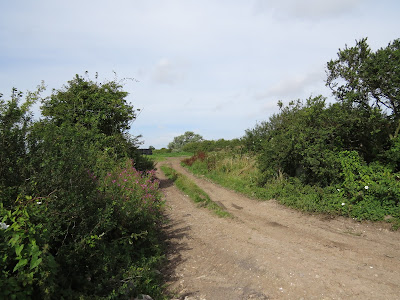 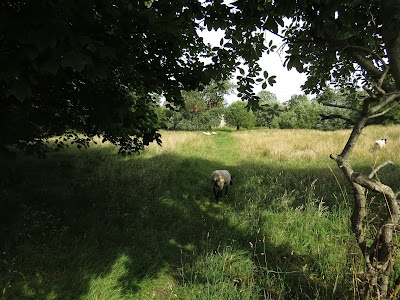 ...as has the Priory (I blame the sheep) 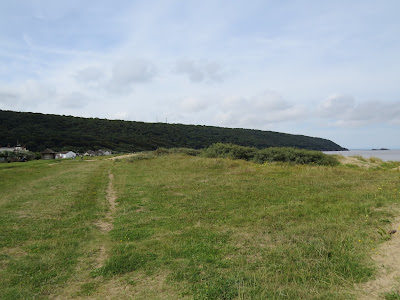 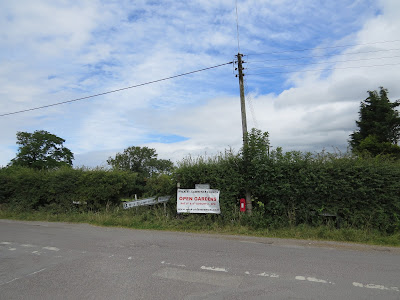 And yes we did go! 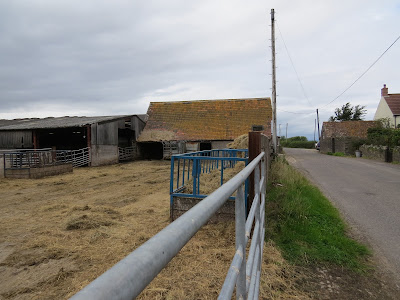 Half an hour later this fold was awash with monochrome bovines 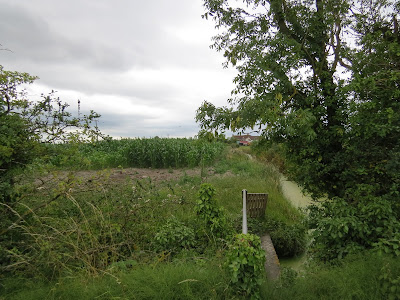 Having started the year as grass, this maize crop is growing rapidly. 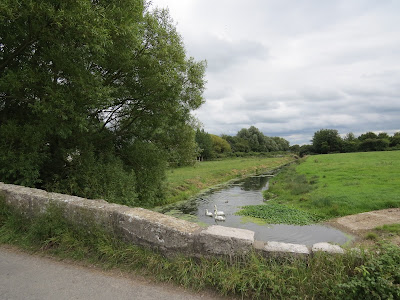 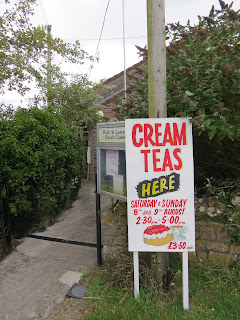 Christmas comes but once a year was the title of a 1930's short film, and in most years this is undoubtedly true. However in August 2015 the Festive Season began early, four months early, and with a nod to Rudolph involved a species of animal we don't expect to see on the wing - ants to be precise. 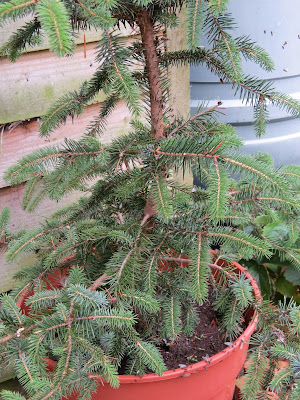 Having hacked and dug my way through 3 hours gardening I'd decided time was right for a large mug of tea and some coffee and walnut cake as a sweetener for the hard graft. Resting the weary bones I surveyed the garden with delight, it's looking good. Next to my vantage point was the Christmas Tree. Not just any tree it has to be said, this was one which I picked as a less than 2 cm high seedling in 2007 growing in the gravel of a forest track in deepest Northumberland. This minute self seedling was not going to survive there once the logging lorries hammered through. It needed saving. Popping it into a crisp packet (not having a plastic bag when you need one) I had a notion to bring it back to Somerset and make it into a pot growing Christmas Tree. It survived the 400 mile journey, and although not the best looking spruce in the wood, now reminds me of home when brought indoors for two weeks each year to deck the halls, not with holly I may add. 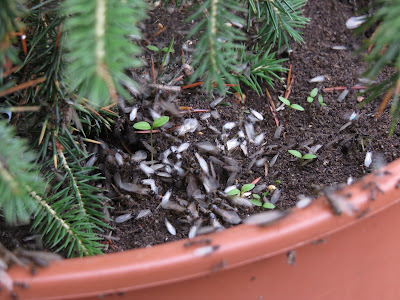 Casually gazing over this, something caught my eye, the soil was moving. No, it was heaving, undulating ever so subtly. I took a closer look just as the first winged queen emerged. The black garden ant Lasius niger. Within seconds the scene changed, the soil slowly became a moving mass of ants with their wings. They were everywhere. 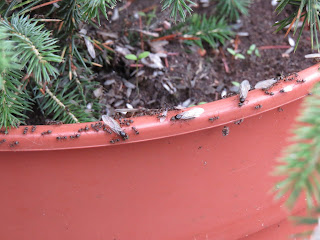 Legend has it that the emergence of flying ants is a once a year event, on a single day, vicariously dubbed in the media "Flying Ant Day". True specific colonies of flying ants do tend to emerge on the same day, but emergence can occur over a longer period.  That said, the end of July and early August are peak 'lift off days'. Today was August the second, it was warm, light winds and blue skies - perfect.

Before moving to Somerset I'd never seen flying ants. Then that first summer of '93 swarms of them moved across walls and across Bristol pavements as I walked into work. While I was fascinated by this behaviour, most people reached for the ant powder and puffed these miracles of nature into an early grave.

Yet, until today (usually being in a hurry) I'd not really had an opportunity to observe the emergence close too over a period of time. Within a few minutes there were hundreds of ants swarming over the pot, made up of three ant body types. Half were wingless workers scurrying around after their winged brethren, and half were winged. Of the winged ants about 30% were what I call of a large and robust figure, with the remaining 70% cut-down must eat more greens versions.

This mass emergence happens when young queens leave the nest in order to set up a new colony. To do this these young females (the larger versions of the flying ants) need to find and mate with a male ant (the cut-down version) - and for some reason, rather than just staying on the ground, do this on the wing.

I was about to witness a 'nuptial flight'

To this cake munching human it all looked a bit haphazard. Many young queens flittered about on the soil or up the tree before taking off in a bumbling weakly undulating flight closely followed by hundreds of male suitors in hot wafting flight pursuit. Many ants just fell to the ground, but the garden soon became a dogfight of the most basic of biological processes, to breed the next generation. The air was alive with wing beats, close too I could just detect a fluttering sound from all this activity. Marvellous. Yet despite their lazy flight I failed to actually see the mid-air-nuptial - well would you if a 50 year old bald bearded Geordie was following you around the garden? Some decorum and privacy please.

But its all about numbers - all emerge in unison, the chances of a successful mating are high (though it never worked for me when in Newcastle on a Saturday night as a young blade about town). And of course flying from the colony decreases the chances of interbreeding.

Once mated the female heads off somewhere to begin the whole process again, and may live as the colony queen for around 10 years. Social insects are fascinating and only now am I taking their ecology seriously.

As I watched, not all the winged ants made it. A crafty spider had spun webs across some of the branches of the tree catching many, mainly male it has to be said, ants. The webs did catch the females but they are big and just too heavy for the webs to contain them; a struggle and they were free. But a few male ants provided sustenance for the hungry spider; ample reward for the long wait. 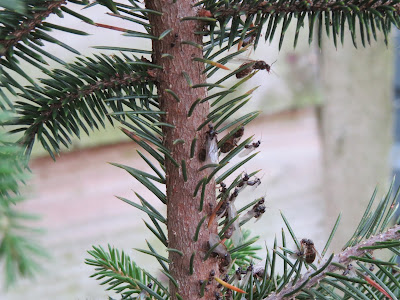 What was fascinating was that after about half an hour there was not an ant to be seen anywhere on the tree. Presumably the workers had gone back underground, and the flying new colonisers had left, though a few still flitting about the garden still. 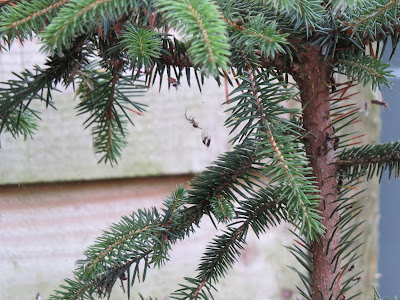 Would I have seen this has I not stopped for a break? I doubt it. We celebrate the magnificent wildlife spectacles of the natural world, the Masai Mara migrations, monarch butterflies, shoaling fish, starlings spectacular murmurations, but for me this half an hour spent in my garden watching hundreds of flying ants emerge was like Christmas had come already, if four months early.

And if you see any flying ants this year - the Royal Society of Biology would like to know. http://www.rsb.org.uk/get-involved/biologyweek/flying-ant-survey
Posted by The Wessex Reiver at 20:32 1 comment: