Well well well....... back in the mists of the last Century I began my conservation-cum-wildlife career. In those days I was here there and everywhere in Durham and Northumberland learning my craft. But by 1990, as a lot of my work was voluntary, I'd realised I needed to get a degree to move on, and get paid for doing a job I love. 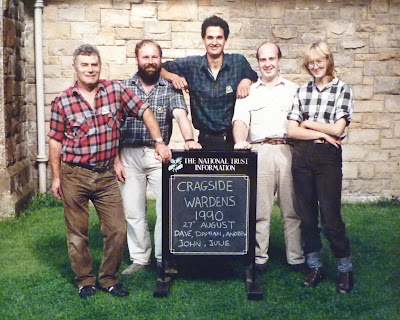 Sorting out the office tonight I came across this photo. Not that I'd lost it, just I didn't know where it was these days. This photograph was my last day as "official" voluntary warden at Cragside in Northumberland, hence why we're all standing like lemons in front of a sign I'd quickly written at the end of the day. I was at Cragside last week and mentioned this photograph to Julie, strange then to see it again so soon after that conversation. Strange too to see the ramshackled uniforms. These were the days before corporate identity came to the fore. We just wore whatever we worked in.

I began there in 1986 and clocked up over 1500 hours of voluntary wardening experience there in the 4 years before this photograph was taken. Not a bad achievement considering I had a full time job too. I was also working as co-ordinator for the North Northumberland Otter Project, conducting various surveys for NGO's as well as Nature Conservancy, working for and on behalf of the National Trust's Northumbrian HQ of anything which needed doing in the Durham area, as at that time there was no NT staff down there, such as NT rep on members groups, involved with the Neptune 500 project, and heavily involved during for the hand over of Souter Lighthouse from Trinity House to the National Trust.

This latter work was fascinating as I was invited into the lighthouse by Trinity House 2 weeks before it was handed over and shown round to make notes for the National Trust's land agent, prior to being myself the NT rep on site after handover. What was lovely was that the keepers lit the lamp for me and I was allowed into the lamp room while the huge lens floated past me on a mercury bath. Something the public were banned from doing. But as I was representing the new owners, it was an absolute privilege to be in a lighthouse in those days when still an operational building run by 2 keepers. An experience no one will ever be able to get again now that lighthouses are unmanned and fully automated.

Although I kept going back to Cragside as a volunteer warden on an ad-hoc basis until 1994, it was never the same. So this photo marks both the end and the beginning of an era. It was the end of my time at Cragside, but six weeks later I started my Countryside Management degree at Newcastle. Graduating from there in 1993, I applied for and got a job with the BBC's Natural History Unit in Bristol, moved south and 18 years this November, I'm still there making wildlife programmes on the radio.

But seeing this photo brings it all back to me, that excitement of developing a career in wildlife conservation in my early twenties. If I had my time all over again, I'd do exactly the same. But where did I have the energy to do all of that work and have a full time job.....and where has the time gone!!

The twilight of a summer sun

I guess the embryonic development of this post began in high summer, although for many years I have watched the phenomenon of sunsets and developing twilight from my house with never ending fascination.

Back in mid June I was up in Northumberland for work. After a busy day on the Farne Islands I took 3 colleagues up to Lindisfarne, to show them the Cradle of Christianity (or as they all thought culture ended at the Watford Gap - the Cradle of Culture). They were bowled over by the fantastic scenery of the Northumberland coast and the island itself. But after a rather terrific supper at the Manor House Hotel, we had to drive back to Bamburgh. The time, 20.45 hours. 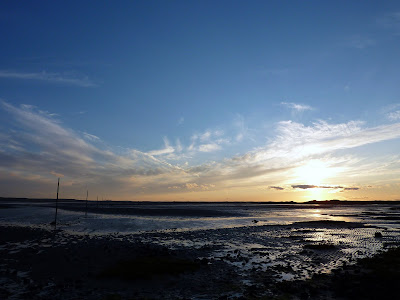 As we drove down to the causeway, the view above literally stopped us in our tracks. And so the seeds of this post were sown. What is it about sunsets in particular which ignite something both artistic but also primeval in us all? We'll all happily watch a sunset develop for hours, while exploding into explosive irritation at being forced to stand in a queue for 1 minute. Is it that timelessness which makes sunsets so all absorbing to the viewer? Or maybe something else related to our hectic modern life. As you read this, I wonder what it is you yourself gain from watching a sunset? 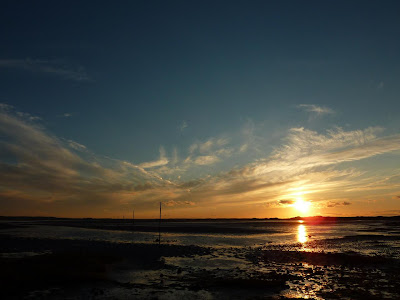 Two emotions ripple through me. Firstly I love the developing colours and cloud combinations a sunset brings to a sky. That ever changing kaleidoscope of colours often associated with vanishing clouds as the energy in the atmosphere subsides with the diminishing rays of the sun. but secondly it is that calm end of a day feeling that I love. The day draws to a close, I muse on the waking hours just passed and think ahead to the new day dawning. On many occasions I've sat in the garden with a nourishing glass of wine watching a sunset develop and fade, only to realise it was dark, so full of empty thought I'd been for that hour or so. 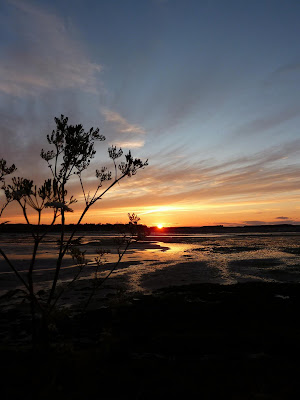 And so it was on that June evening with my work colleagues. We could have stood there for hours watching the sun set, but an early start the following day brought us back to earth, until that is we drove past Budle Bay, between Bamburgh and the A1. Yet again we were literally stopped in our tracks by the two images here. 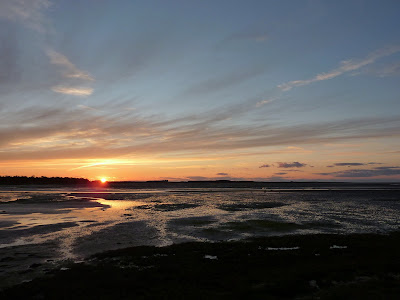 Looking at these photographs in early September, I can recall every detail of this view. It also makes me realise that now, sunset is about 7.45pm. In Northumberland in mid June it was 21.45pm. Celestial motion stops for no man. 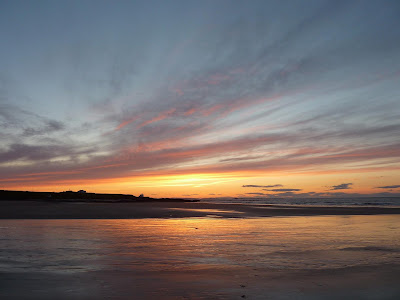 By the time the above and next two photographs below were taken on Bamburgh beach, it was well after 10pm. The colours intensified with the passing minutes. In all it had taken us nearly 2 hours to drive the 20 or so miles back to Bamburgh. The four of us were reluctant to head back to the hotel, and even at 11.30pm I looked out of the bedroom window and an orange glow still emanated from the north. I do miss the long day length Northumbrian summers. 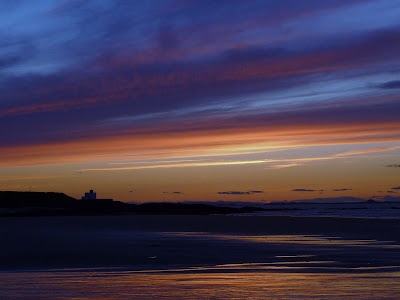 So what is a sunset? Well I'm sure most of you know, but in essence as a ray of white sunlight travels through the atmosphere to be viewed by us, some of the spectrum of colours are scattered by particulates in the atmosphere. Blues and greens being of shorter wavelength than other colours scatter quite strongly and are in effect removed further from the visible light spectrum than say the warmer red colours. Along comes a sunset when the distance the white lite has to travel to your eye is longer than at mid day. The short wavelength blues and greens are scattered almost completely, leaving the warmer long wavelength warmer hues to dominate the sky. This warm red light is then further dissipated by clouds (which also have additional atmospheric effects) and dust particles allowing the intensity of the light to, well, intensify. It is these latter dust particles which generally make sunsets more dramatic and longer lasting than sunrises, as usually more dust is in the atmosphere in the evening than in the morning. and of course once the sun sets, what we are viewing then technically becomes a twilight. 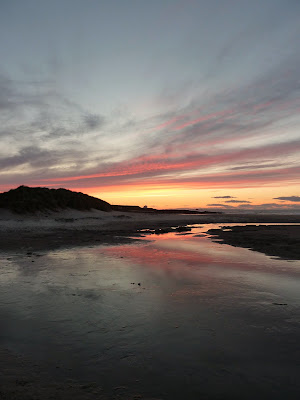 Back to my sunset images from this summer.

I'm not sure whether it has been the unseasonal nature of this summer's weather but I feel I have witnessed some dramatic skies after what appeared to be inauspicious days. 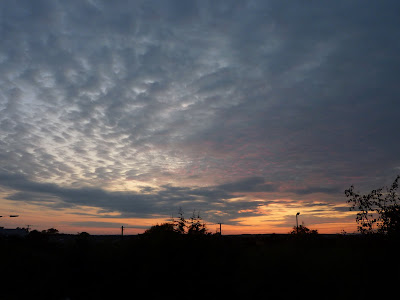 I've mentioned before that my house looks west towards the Black Mountains of Wales. To get to the horizon, in the middle distance is the estuarine Bristol Channel. Ever since moving down to Somerset, I've been aware of sunsets of staggering magnitude and proportions, often after a wet day. The light intensity in this part of the world is very strong, with the prevailing wind straight off the Atlantic. However the Channel itself is muddy in colour, I've often wondered therefore whether this brown sea adds something to the atmospheric colouration. After all the sea does reflect blue light back to the atmosphere, making the sky blue, or at least that's what my grandmother told me!! 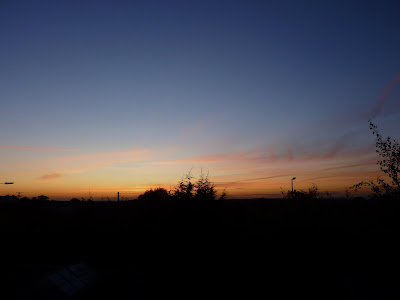 Being on the west, sunrises of note are few and far between, however sometimes just before sunrise produces fantastic cloud formations for a few minutes, until like a magician with an illusionary trick, the clouds dissipate and the sun rises again.

It is as I've said, sunrises which fascinate me. and so the following photographs have all been taken from my house in the last month. I've added the date and time just for interest. 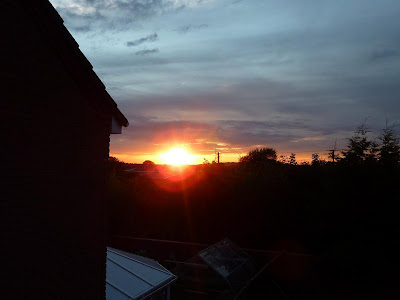 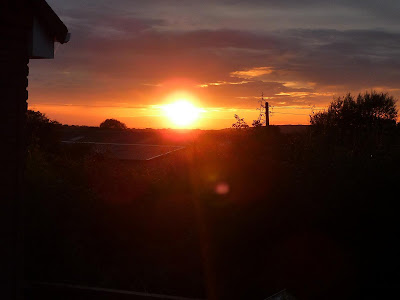 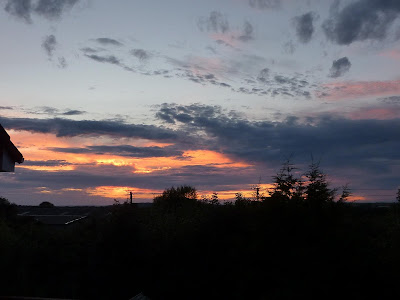 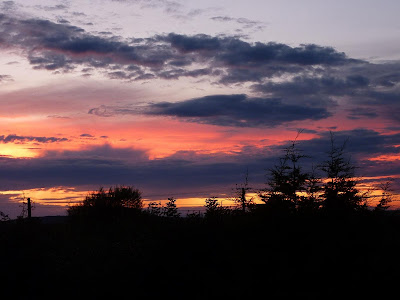 The next two photographs illustrate what is a regular occurrence here. This was August 26th. It had rained all day, not just any old rain, but a torrential downpour, which finally ended about 6.30 in the evening. I was in the office working away when all of a sudden a shaft of bright light illuminated the room, such brilliance after a wet, dark and quite frankly depressing August day. 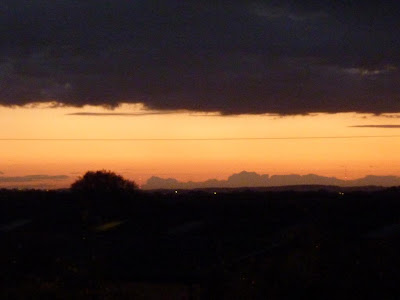 As often happened after a wet day, just before sunset the clouds seem to lift up from the horizon, just enough for the sun to almost say, well that's your lot for today, see you tomorrow. Which in turn provides some dramatic and as in this case Apocalyptic skies. 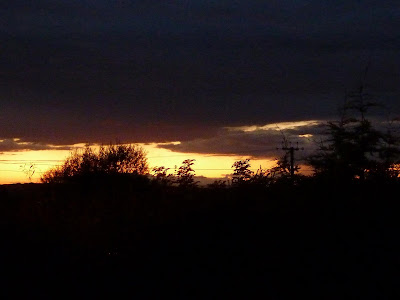 This final raft of sunsets have been taken this week. I'm on holiday and this week at home with my parents visiting me. After a hard day chatting and catching up, what better way to relax than watch a sunset develop over the Bristol Channel. 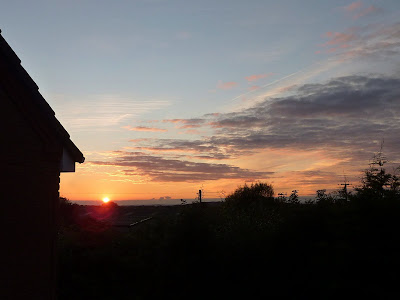 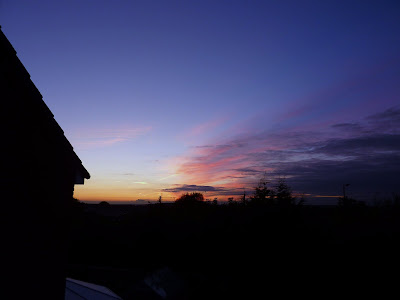 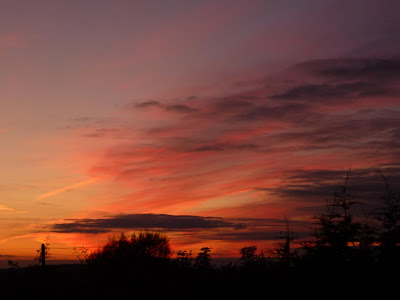 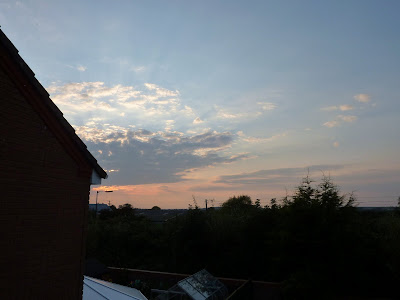 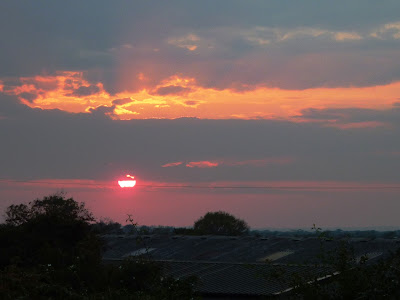 And so as we head into autumn and then winter we will of course experience more sunsets, but I do feel the summer of 2011 has been an exceptional sunset year, for me at least.

As if to prove my point in the above post, this afternoon it began to rain, torrential rain (why I came indoors to blog). But just now at 19.45 the clouds parted near the horizon as they often do in bad weather and this was the view out the back of the house just a few minutes ago, yet it was still raining on the house. Another magical sunset on a wet evening in September. So I'll let the photograph I've just taken below end the post.............. 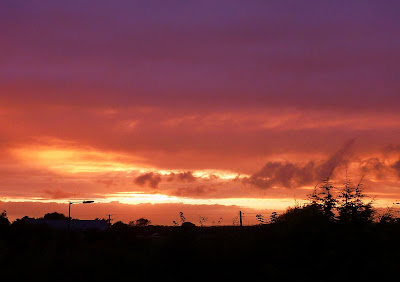