﻿
Saturday night in the middle of February. Saturday night in the middle of nowhere. Outside, following an altogether pleasant day bedecked with more sunshine than had been foretold,  the wind has picked up, blowing pressure wave tunes through the poplars encircling the woodman's cottage in the dark, inky night. Tomorrow we are to be treated by plunging temperatures and later if we are lucky, a light snow shower or two. I'm in Herefordshire. 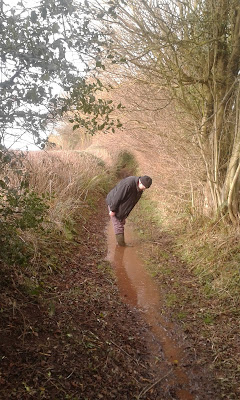 There are times when no matter how hard one looks, the right place never seems to materialise. Many a rural landscape have I have nodded an acquaintance too; both for work and for play. For years however the Welsh Marches (and for that matter Wales) were like a dark grey cloud on the sunny side of Wessex Reiver's visitors map. Colleagues, friends and many a TV programme would say, this beautiful remote corner of England (or Wales, as it is hard to tell sometimes) is a must to walkers, lovers of the outdoors, and middle aged fat blokes in a funny hat. But still I resisted. Then in 2011 I made a radio programme in Snowdonia (filmy ferns if you are interested - look it up). The presenter lived in Much Wenlock. There was nothing for it, over the Severn Bridge and hope I will be able to return to civilisation.

Well, like many epiphany moments, what we think of as places not worth a second look, are in fact much better than the hotspot tourist attractions loved by the Metropole second homers down the M4, right at Bristol and keep going  till the Atlantic surf spray obscures the windscreen.  Not that there is anything wrong with that but whole tracts of the country are wonderful and never, or infrequently visited. A couple of years ago I got lost in Nottinghamshire, ending up at Southwell, famed only for its race course. An enforced couple of hours revealed a fantastic town, home of the Bramley apple, an ancient historic minster amongst others. Yet, suggest a weeks holiday in Nottinghamshire and there will be sniggering in the back, I guarantee it.

Not that Dorstone is off the beaten tourist track. Lying at the head of Herefordshire's Golden Valley, this area sandwiched between the Brecon Beacons and Hereford has long been a tourist destination. Yet this gem of a place was unknown to me until a friend put an advert for a woodman's cottage on Facebook last autumn. Where?  I had to look it up - still couldn't find it, but the self catering abode looked wonderful, I booked the week on the spot and arrived for the very first time last September. I'm now on my second visit, with the significant other, who loves it. 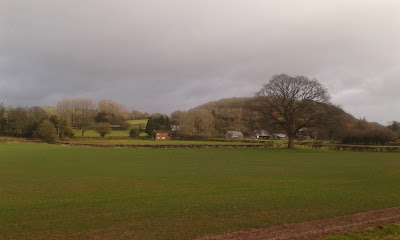 Hodsons's House  (above, grey building just left of the tree) nestles at the foot of Dorstone Hill seen in the background and well, fields. Hard by is the village of Dorstone, population about 400, and the Pandy Inn. And that's it. Yet within a gnats flight path there are fabulous walks, wonderful wildlife, ancient monuments, views that take your breath away, all without the need to get into a car. Last September we stumbled into the Den of Iniquity known as the Dorstone Front Room. Here in the former village post office residents take it in turn to offer tea, cake, printing, stamps, crafts, books, and a good chat. We only popped in for a cup of tea and left an hour later like long lost relatives embraced into the bosom of the valley. So that's why were back for a long weekend. 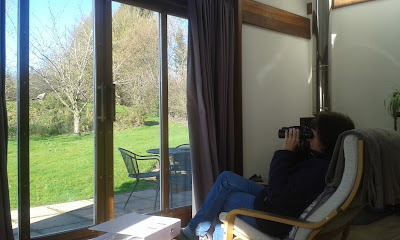 Snow had fallen on Friday morning, we could see it on the hills over the Bristol Channel and more planned over the weekend, which made for a slightly anxious packing. However the sun shone and more like a late spring day than late winter, we arrived just after noon. Kettle on, feet up, a bullfinch. Literally minutes after arriving this female bullfinch enthralled us for half an hour, debudding the fruit trees in the garden (not sure the owner would have approved). But that was the beginning of a wildlife odyssey in the garden. Nothing spectacular you understand, just lovely. 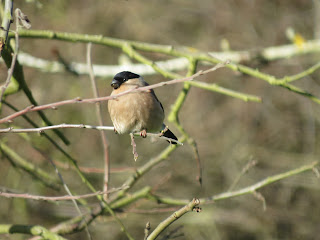 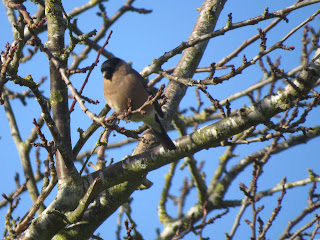 The images above were taken from indoors, from the large glass doors on the gable end of this house. 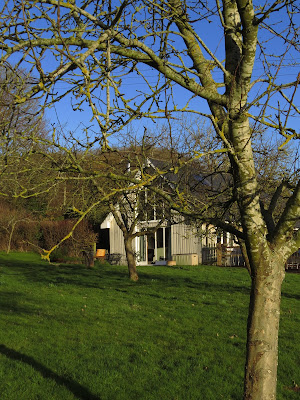 ﻿
Hodson was a carpenter and woodsman. For many years this was his workshop and he designed a lot of it himself. As you can imagine there's a fair wedge of wood inside. The current owners came here a few years ago and modernised it with an open plan downstairs and astonishing mezzanine upper bedroom. We love the house, but it is the location that is the King's pyjamas. 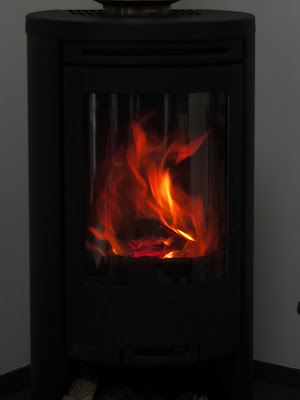 A log on the woodburner and a mug of tea in the hand, what better than to while away a whole day watching wildlife out the window. Last year they even made 150+ bottles of apple juice from their own trees, a much loved arrival gift indeed. Went down a treat with the homemade carrot cake also provisioned. 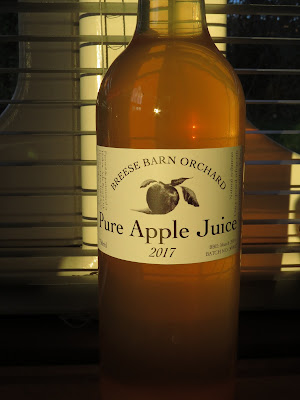 So what of the wildlife? We've heard enough of the house.  Well, apart from the bullfinch already mentioned, blackbirds a plenty... 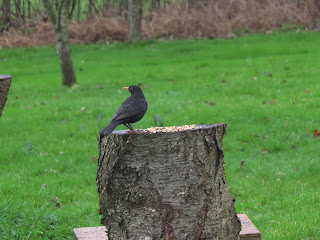 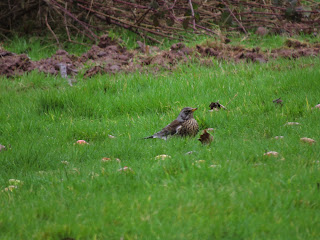 ... tawny owl calling, a most glorious dusk chorus of tik tik-ing blackbirds and song thrush, chaffinches, sparrows, starlings, woodpigeons, and I'm sure I've forgotten many more, all seen from the window, as well as the cheeky grey squirrel. 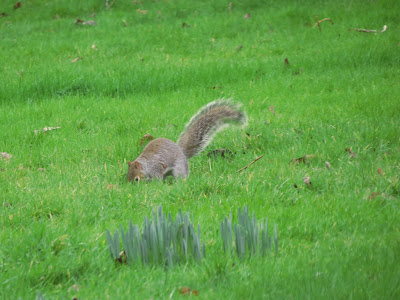 But man can not live indoors for ever. Alongside the property is Spoon Lane, or as the Ordnance Survey calls it, "un-registered byway". Why Spoon Lane, I don't know but it is wet. Contour-lining along the base of the hill, various springs seems to weep and seep into this ancient trackway, providing, in winter at least, a small stream to walk along. Which we did, to the far end where there is an even ancienter (if that's a word) orchard on its last legs. Fabulous wildlife habitat. 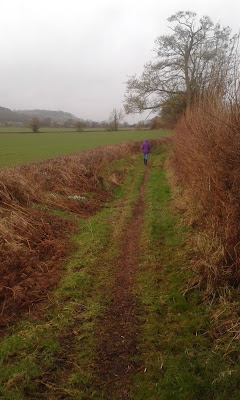 The image below was taken in September 2017 - it is a wonderful walk, botanically rich. 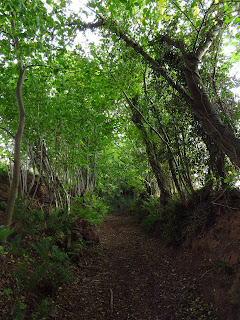 Back in February 2018, the snowdrops are coming out and the skeletal hedges revealed a number of nests including this song thrush nest. 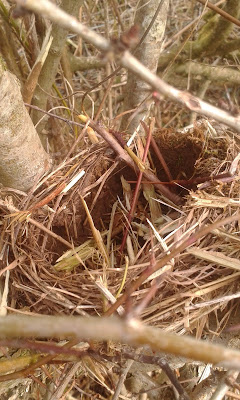 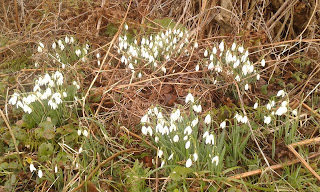 Sadly we needed refreshment after the walk, where better then than to beetle across the fields and down a pint of Hereford's finest in the Pandy Inn. 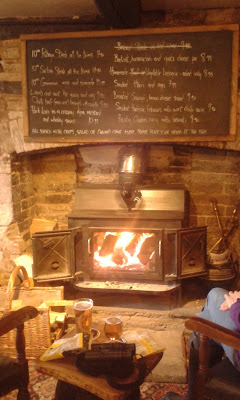 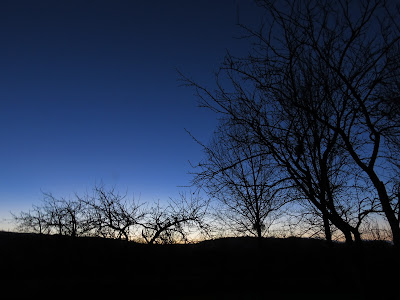 You watch the telly. Sir David Attenborough is inches from a stunning wildlife spectacle, or conversing with a gorilla in a shrubbery. Wildlife watching is so easy isn't it? Well, actually no, after close to 50 years watching wildlife I have had many more frustrations than successes. But of course the successes are, well real successes. Those programmes like Blue Planet take 3 to 4 years to make and many hours of sitting twiddling thumbs waiting for two minutes of  action. And in my world of watching wildlife its the same. Take my jackdaws. 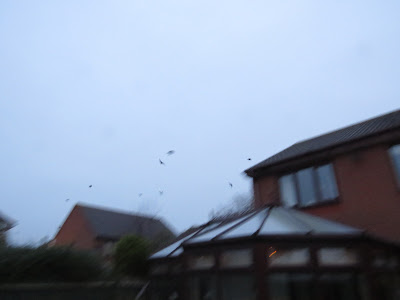 I call them my jackdaws but of course they are free flying corvids. Each morning at the moment , around 7.30am they fly low, below roof height, and true past the back of my house as about one hundred birds leave the night time roost and head off to the fields for breakfast. Normally I'm getting ready for work, and see them just feet from the kitchen window, jak-jacking as they pass. Thus this morning being Saturday a pint of tea in one hand, camera in the other, I found myself in a drizzly garden. Poised to take a photograph of the black missiles passing over. Thirty photographs later, this is the best!!!!
Today not only did they fly across in dribs and drabs of a few birds rather than the massed fly past, they also flew in front of the house or higher up and towards the sea. (Wouldn't you if I was out and about). As I only really have seconds to get ready before they are in view, I had the camera set up and ready. However because they didn't come in the planned flight path I made the cardinal mistake of hand holding the camera, on a dull drizzly day, before sunrise. The result as you can see was spectacular.
So there you go. Watching wildlife is a hit and miss process. Some days you win, some days like today you lose. But that's not the point, as the saying goes, the "destination is about the journey". I remember in the 1980's training up people in otter surveying and a long conversation with a lovely chap who had come on a training day I was running only to at the end complain we'd not seen an otter all day, so what's the point of this? Despite seeing an otter slide, otter spraints and being surrounded by fabulous wildlife along the River Coquet, he just didn't get it. He didn't get that seeing signs are just as important as the animal itself. It takes all sorts, I often wonder if he still looks for otters.
So the moral of the story is as I explained to a very new to the job National Trust warden, "come to a spot where you think there is wildlife, sit down, and watch, every day and eventually the wildlife will come to you, and how you want it". Or take an expert that has done much of the leg work beforehand of course.
Such as seen recently on TV my friend and superb naturalist John Walters and his long tailed tits night roost which took three years to find, but that's for another day.... maybe a posting about the potter wasps John took me to see. Magic.
Posted by The Wessex Reiver at 10:01 1 comment: