I can't believe it's now two months since I took these photographs, in my mind it's just last week. It goes to show how when we're back in the thick of it time flies. But I must get this posting finished, a posting which has languished in my draft pile for 3 weeks.  Behold a selection of images 'wot I took' in April in Orkney. At the time I was struggling to come to terms with the incessant wind, but now looking back from on a humid hot June day in Bristol, a light freshing north easterly would be most welcome. Shall I write some prosaic reference to my time there or just blurt out a caption or two for each image...... Mr Pickwick, fetch me the quill, I shall caption with abandon....... 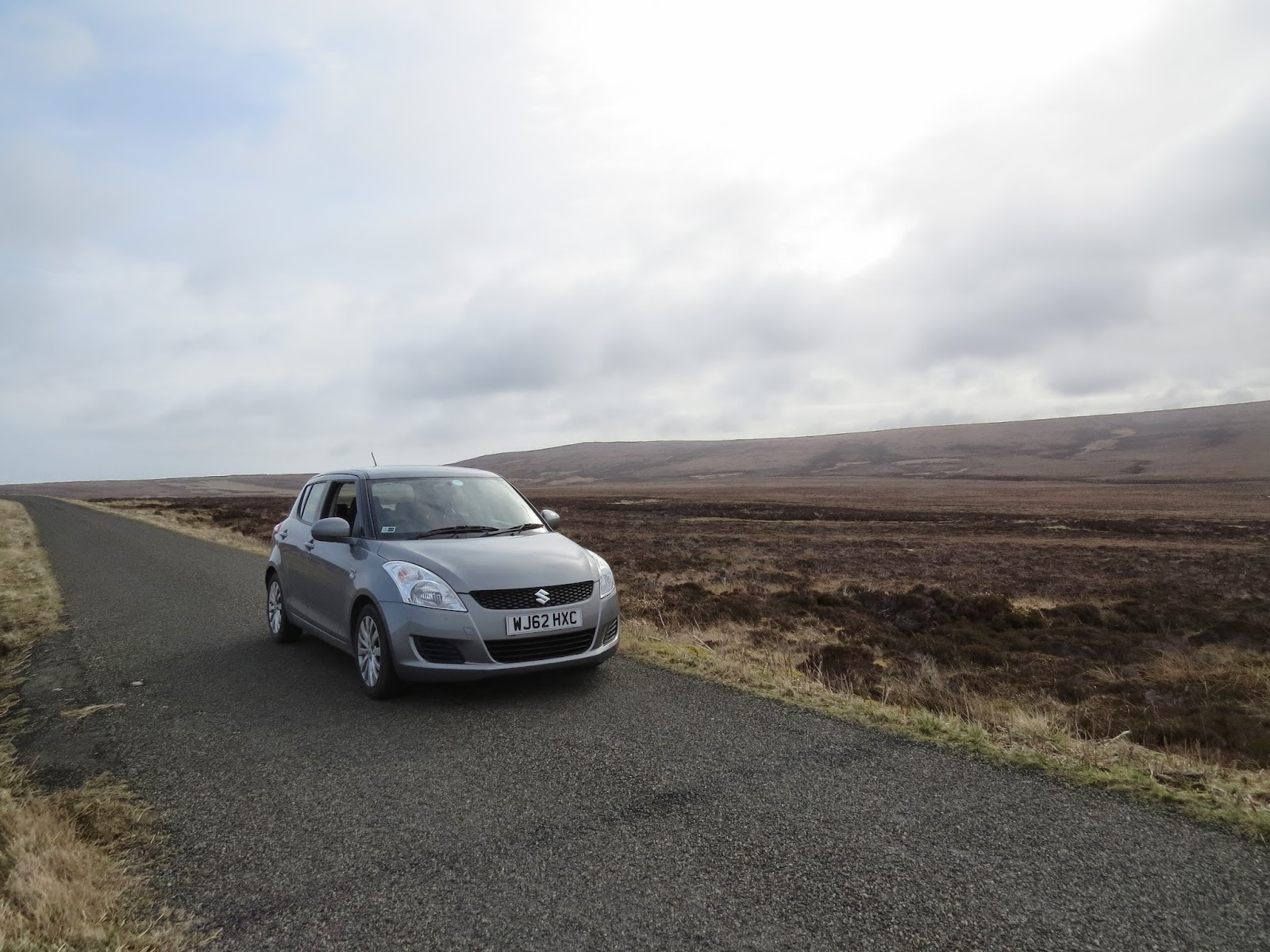 Why have I photographed my car on an empty road. This is no ordinary road this is the road used in the cover photograph of  the amazing album, 'Road to Hammer Junkie' by the Orkadian band, The Chair. It is my homage to a most uplifting and quirky album cover - sadly I can't find a link to the photograph in question but it involved a 1920's car and some disreputable characters thumbing a lift... I think the wind has blown them all away in this image. 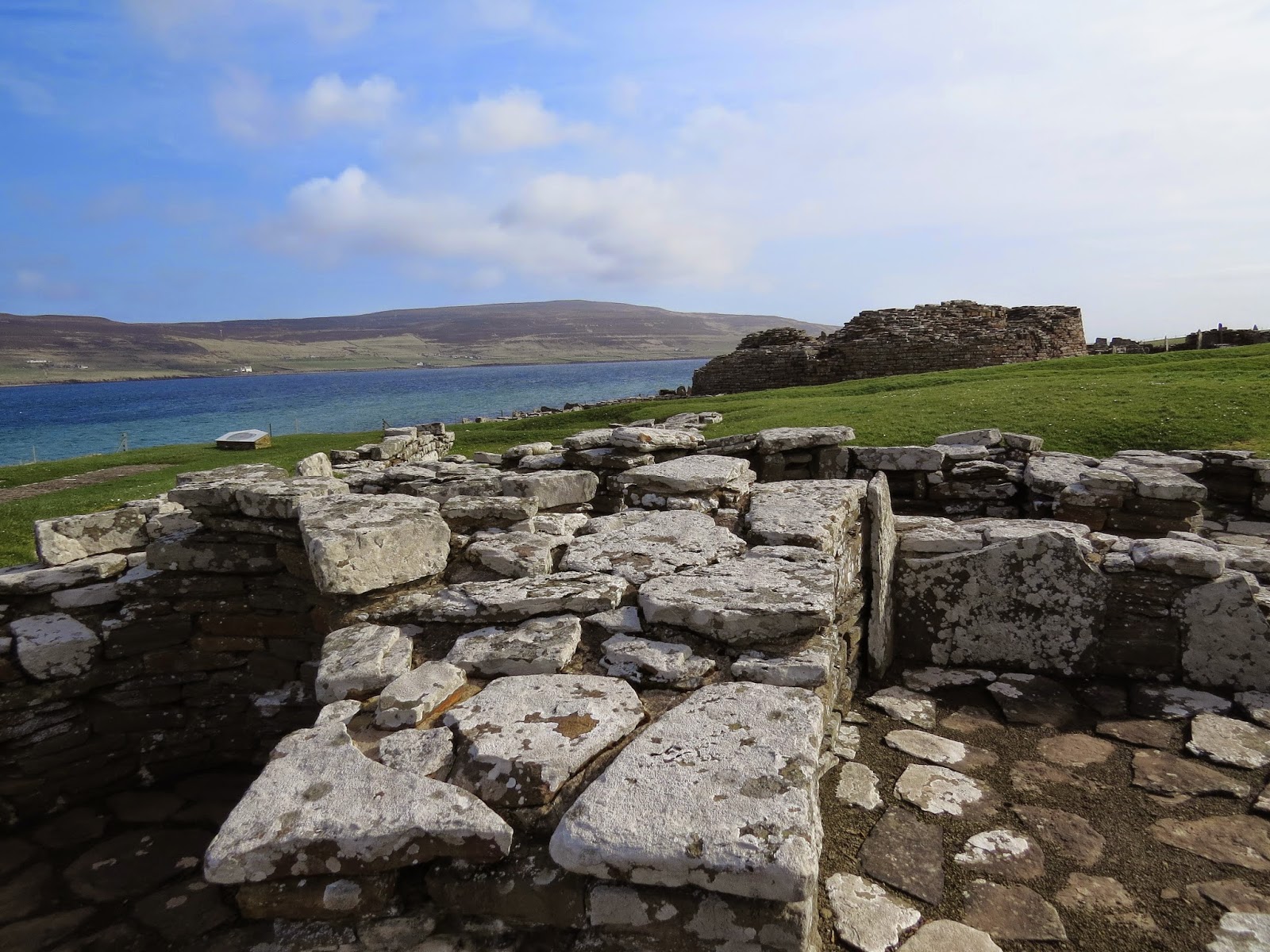 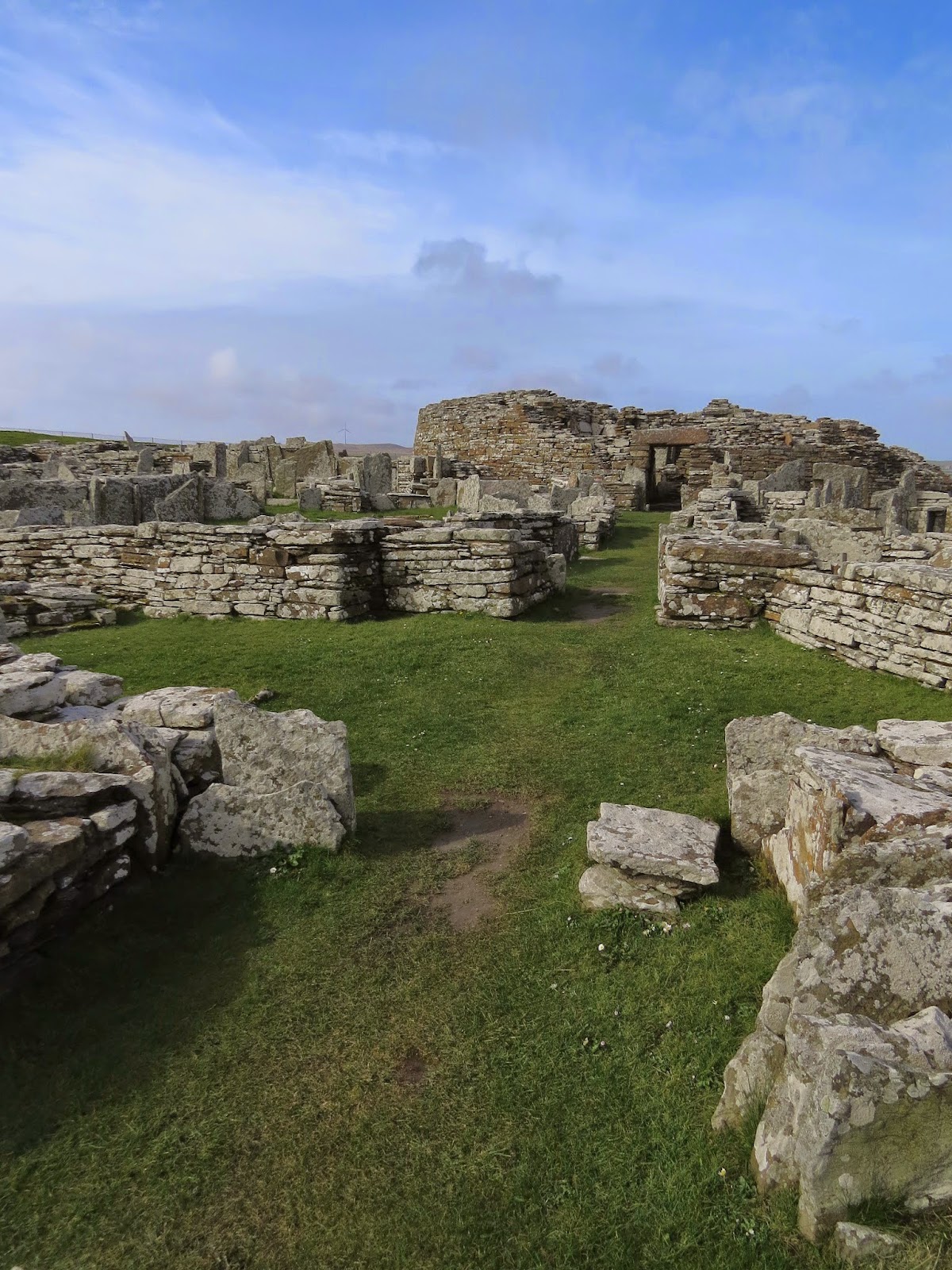 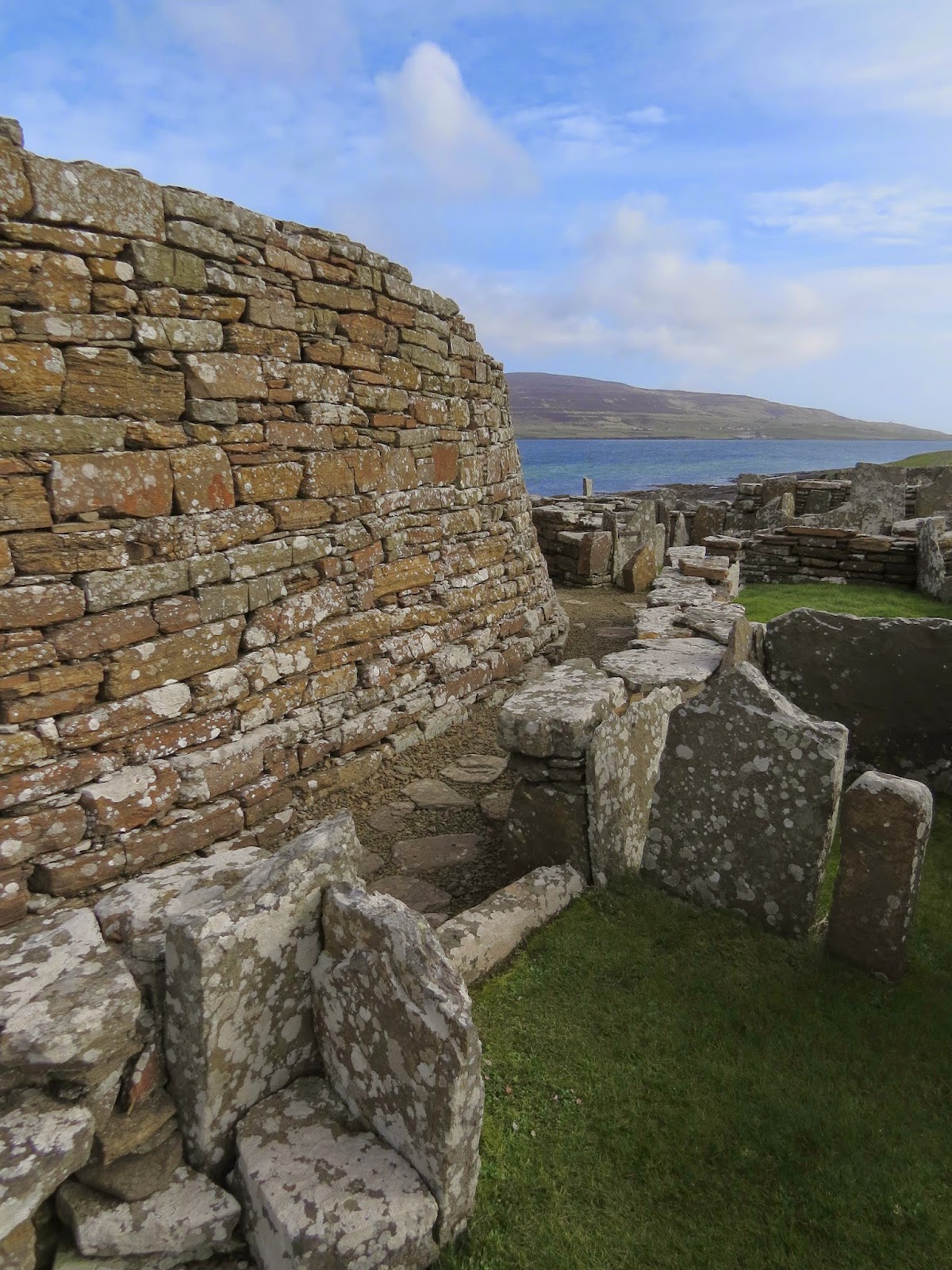 These three images were taken at the Broch of Gurness. http://en.wikipedia.org/wiki/Broch_of_Gurness  I loved it here, arriving in the teeth of a gale, as I pulled into the empty carpark there in front of me was a man from the Council trying to paint a sign. Lets say they're a hardy bunch up here. The Broch itself is on the tourist trail but unlike its better known cousin Skare Brae, this site is open acess (for a small fee).  As I wandered about looking at the fortified centre and rooms radiating off I tried to think of what it would have been like 2,500 years ago. Harsh yes, life expectancy low, but a simplicity we have all but lost in our modern cluttered World. And the view is canny too as we'd say in the north. 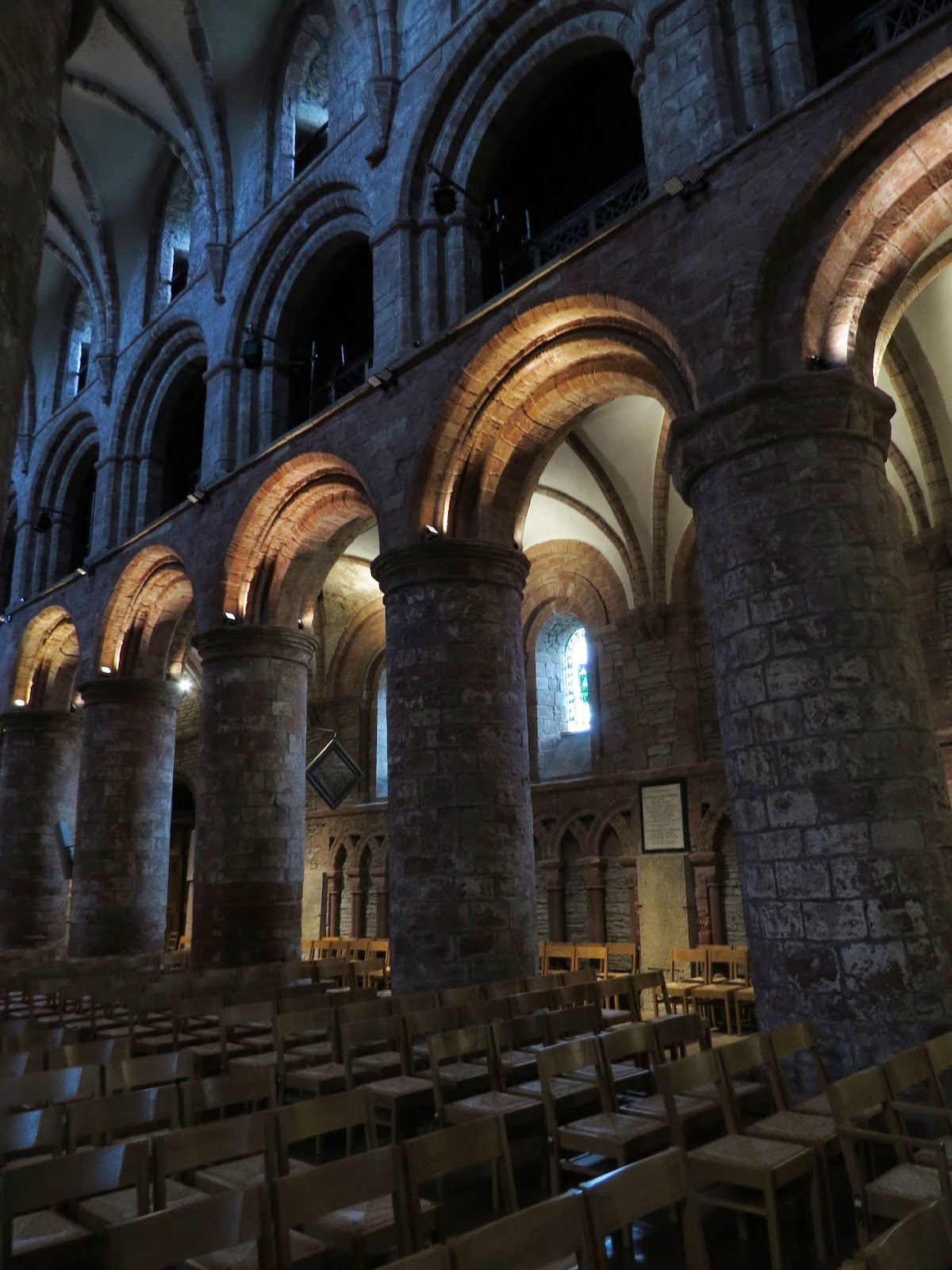 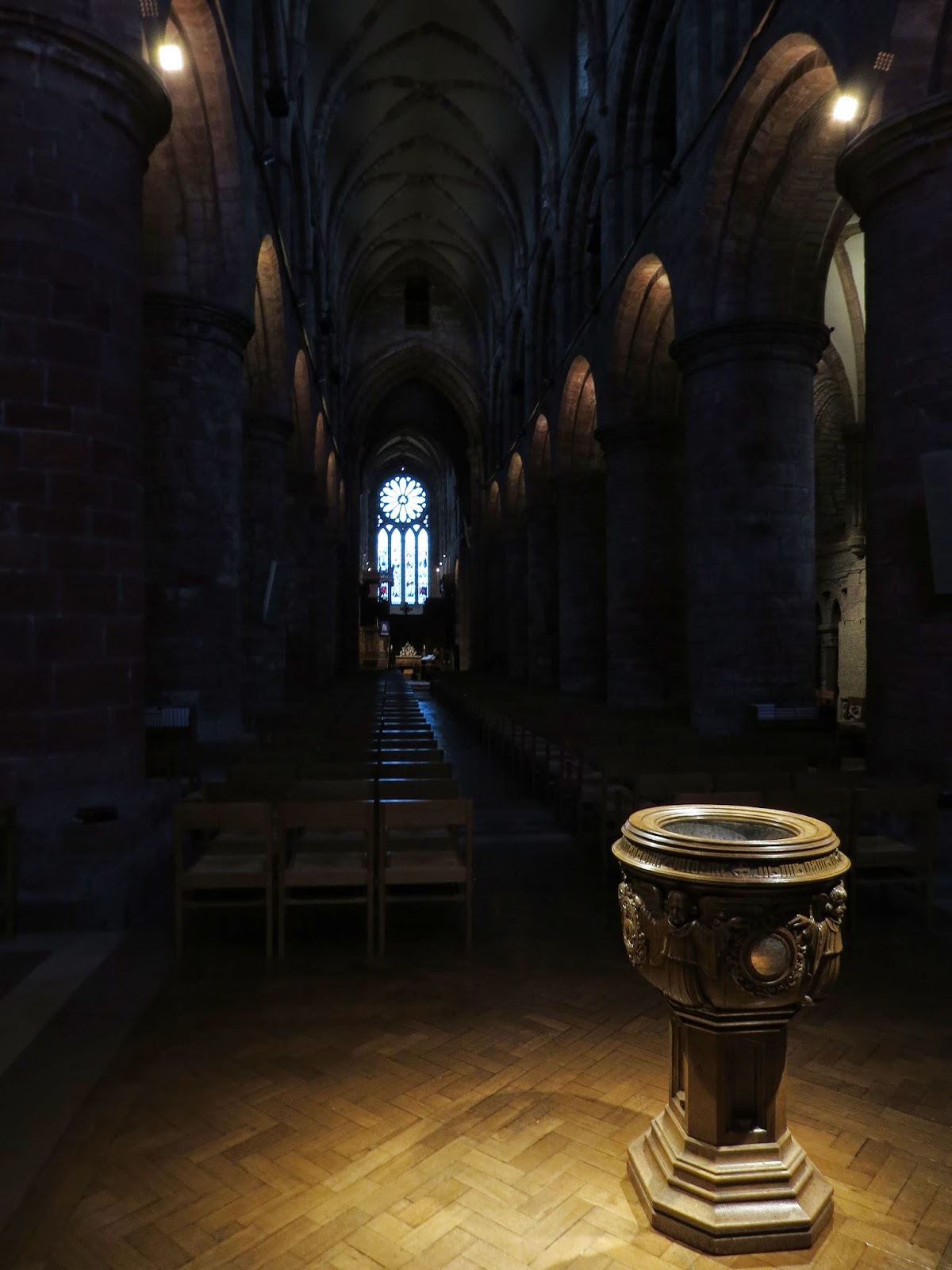 I was fortunate in that in all my time on Orkney I only had half a day spoilt by rain, not that rain ever spoils anything. This gave me an opportunity to head into Kirkwall and their magnificent St Magnus Cathedral http://stmagnus.org/ I absolutely loved this ancient, built by and for Norwegians place of worship. Walking into this echoing dark place after having my ears battered by the wind can only be described as the arrival of snow on a frosty night, everything was silent. In total I sat for over an hour just listening to the silence, which as a sound recorder is a precious commodity these days in Britain. 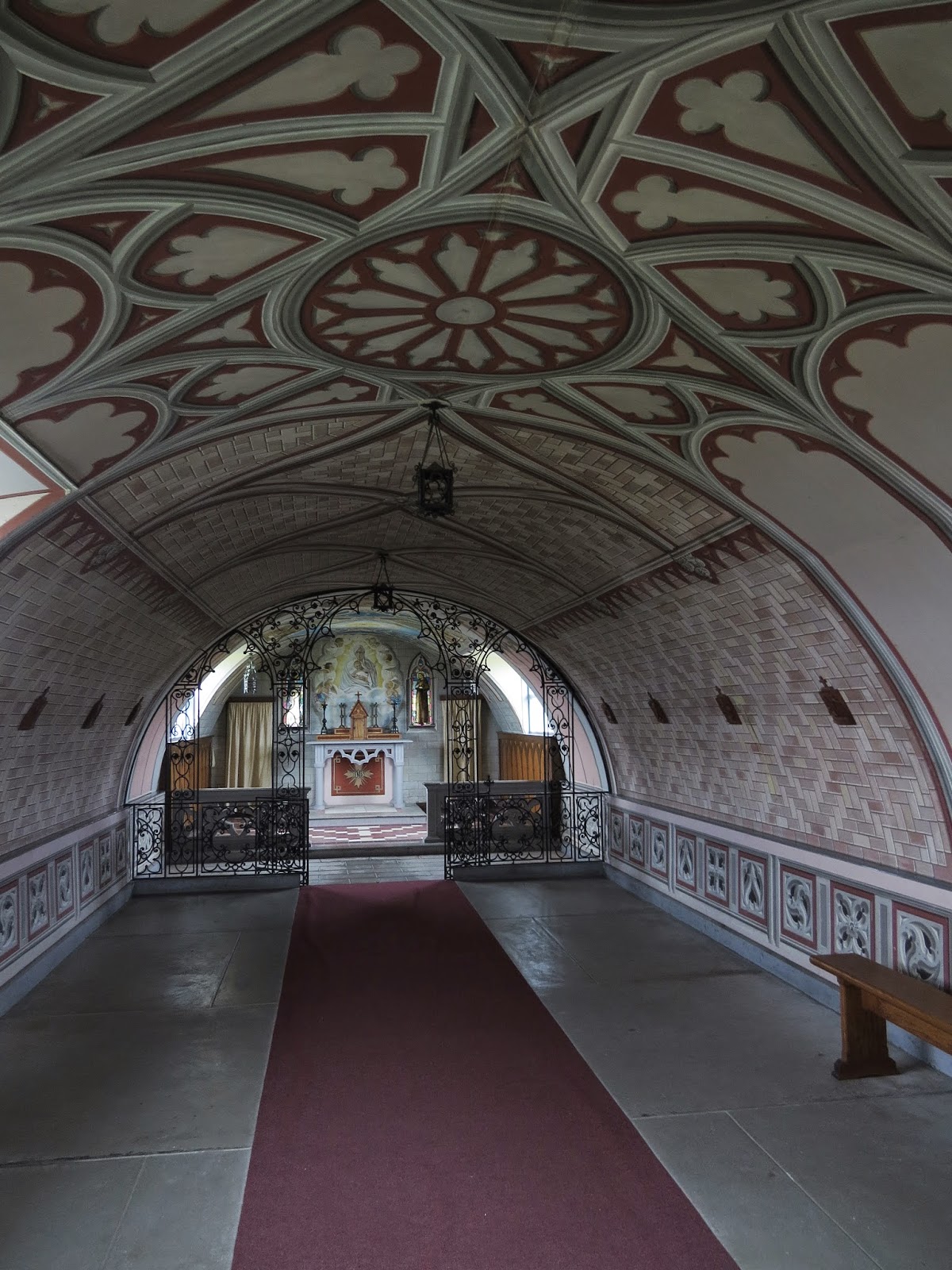 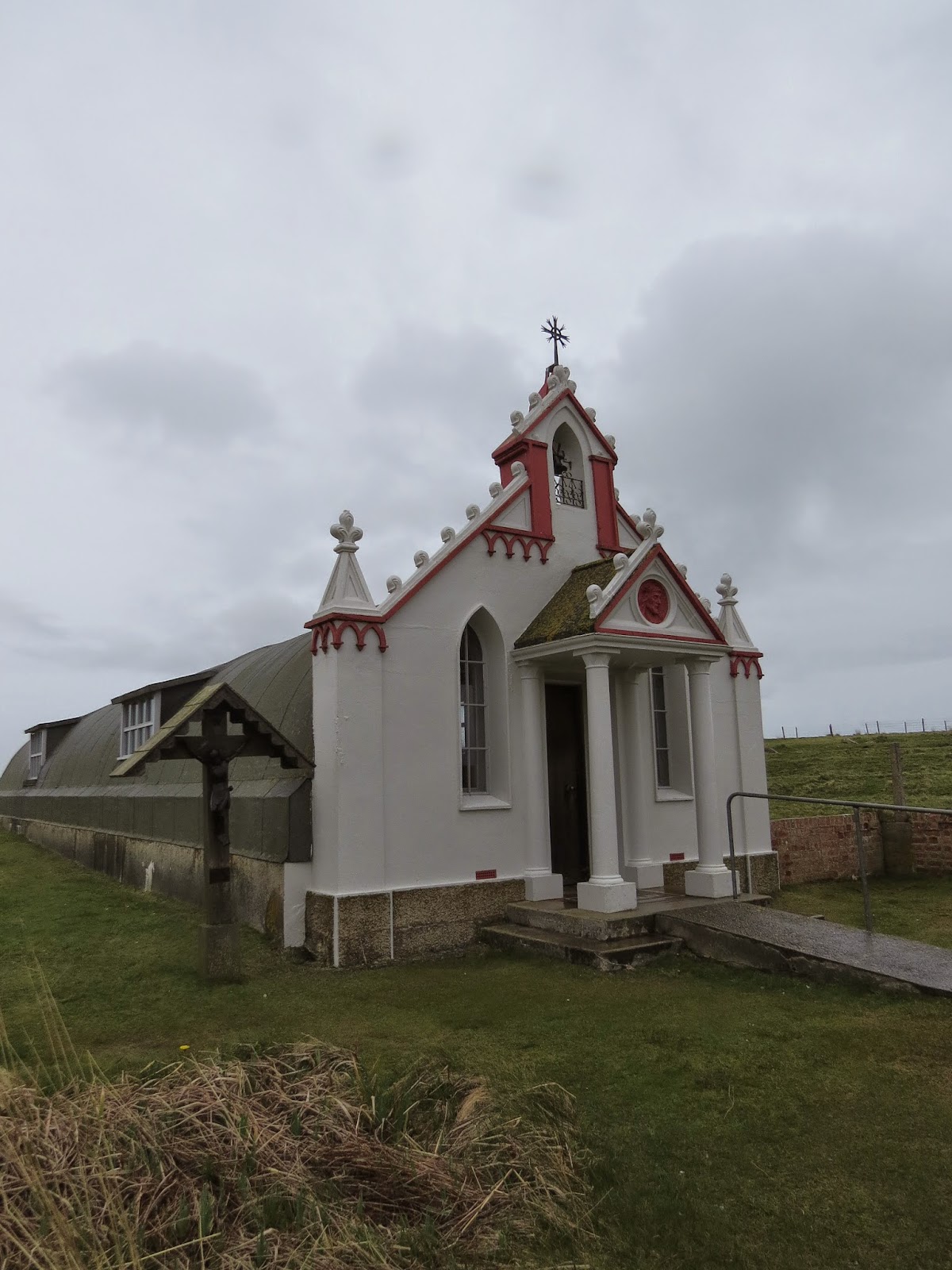 The Italian Chapel. http://www.visitscotland.com/info/see-do/the-italian-chapel-p253741 By now the weather really was closing in with low cloud and rain, although the wind had eased. small mercies indeed.  How far south could I get then using the Churchill Barriers? Of course I knew the southern tip of South Ronaldsay but on the way I deviated into this well known landmark. Built by Italian prisoners of war in the 1940's it was a focal point for a large P.O.W camp here. Remnants of that exist in the turf, with only the Chapel remaining, which was restored by one of the artists in the 1960's. I'm always sceptical of visiting 'must see' site on a holiday, this one however was stunning. As I left the Chapel I met a musician called Rick Redbeard as I discussed in my oher 1 year project blog http://365-2-50.blogspot.co.uk/2014/04/april-9th-2014.html 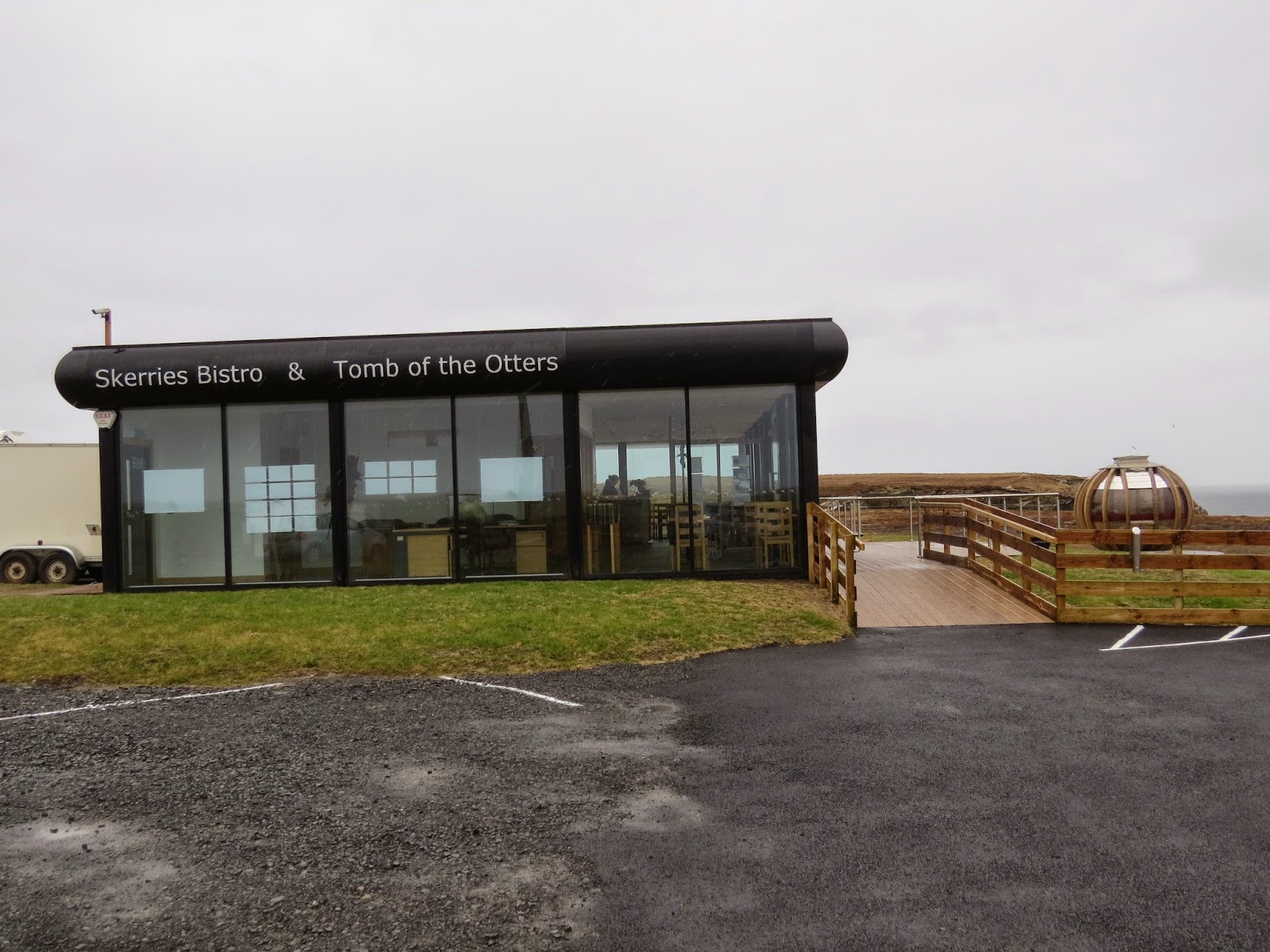 Newly opened in April, with a view to die for over the Pentland Firth, the Tomb of the Otters bistro. Lovely coffee and the cheesecake was........... yum! 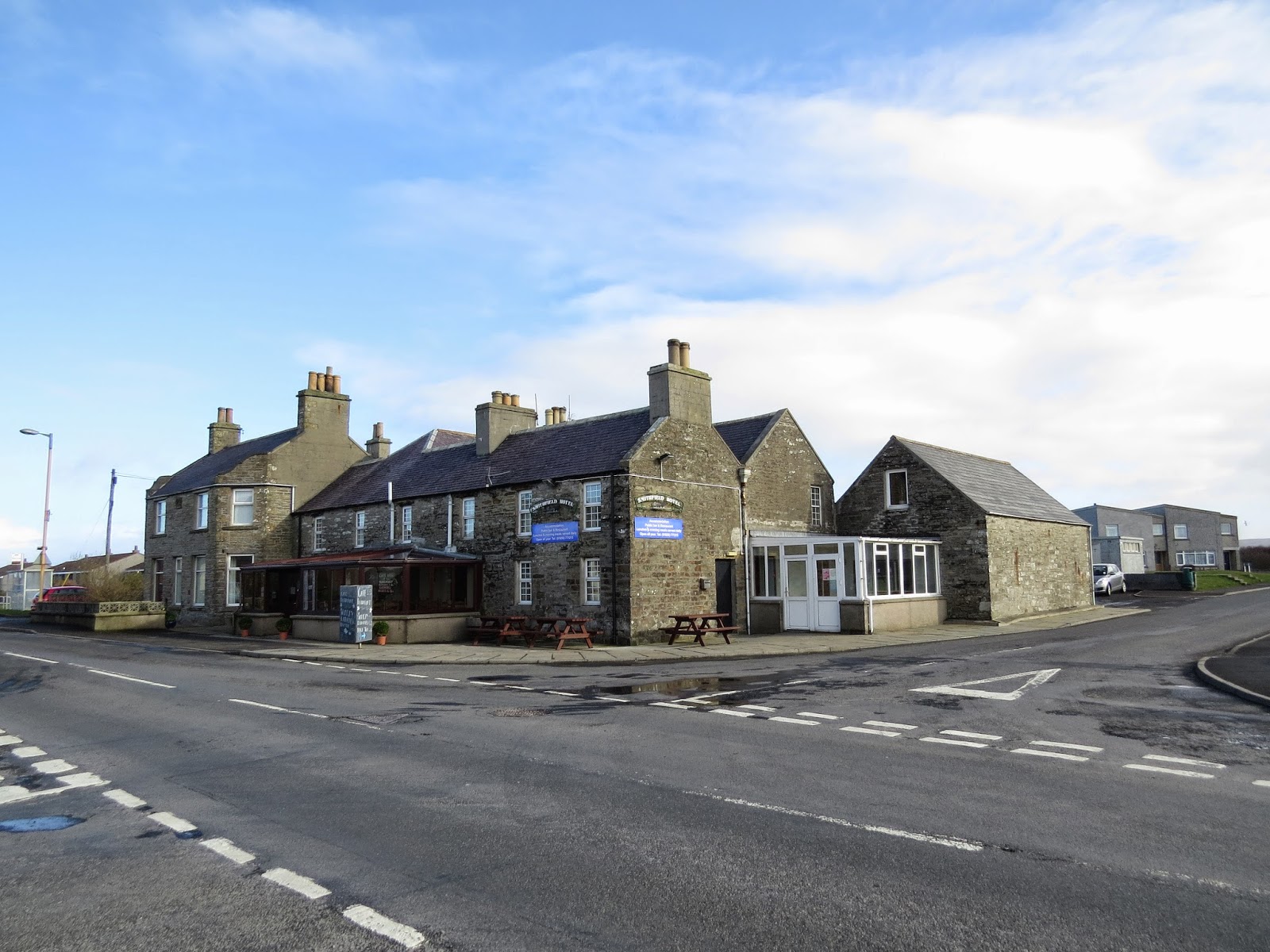 The Smithfield Hotel, Dounby. My HQ for the stay. I loved it here. It is absolutely bonkers, but nonkers in a way which makes me want to return time and time again. Take for the fact that to reach the restaurant from the hotel, one either has to walk through and behind the serving part of the bar, or walk outside and around the corner, entering from behind. It's not the current owners preferred route of choice but the previous owners added an extension without much care as to points of access for the paying guest. The owners Ali and Lyn were superb - Orcadian going back centuries, nothing too much bother and I learny more about the island from them than any guidebook. I'd recommend this hotel to anyone as long as you don't want posh and a sea view. A family hotel with character.http://www.smithfieldhotel.co.uk/ 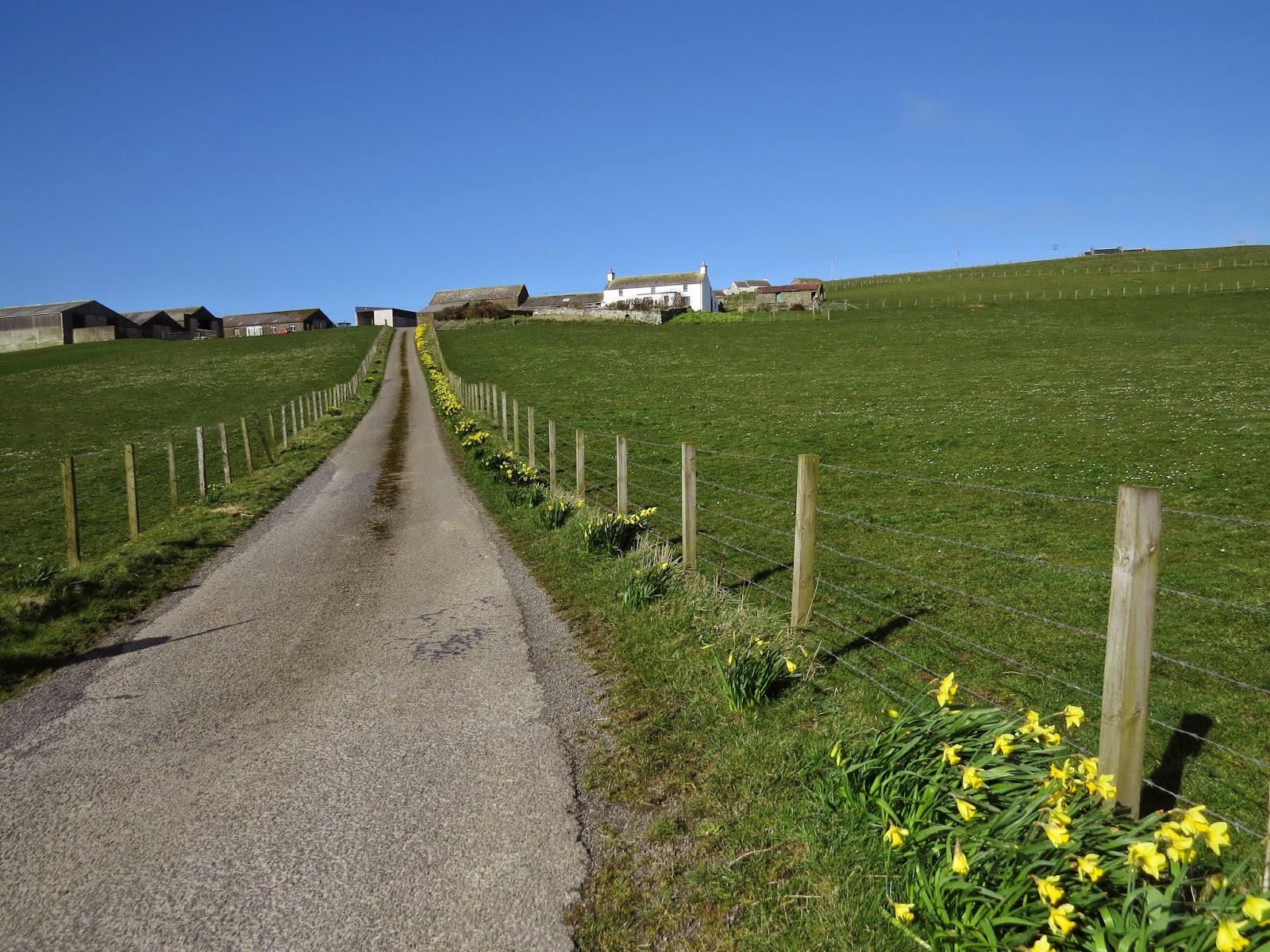 One of the surprising things of my time on Orkney were the mile upon mile of daffodils. Every roadside verge is at this time of year lined with nodding yellow - I asked Ivy why there were so many and she said 'because they've been planted' Now that is a good answer. 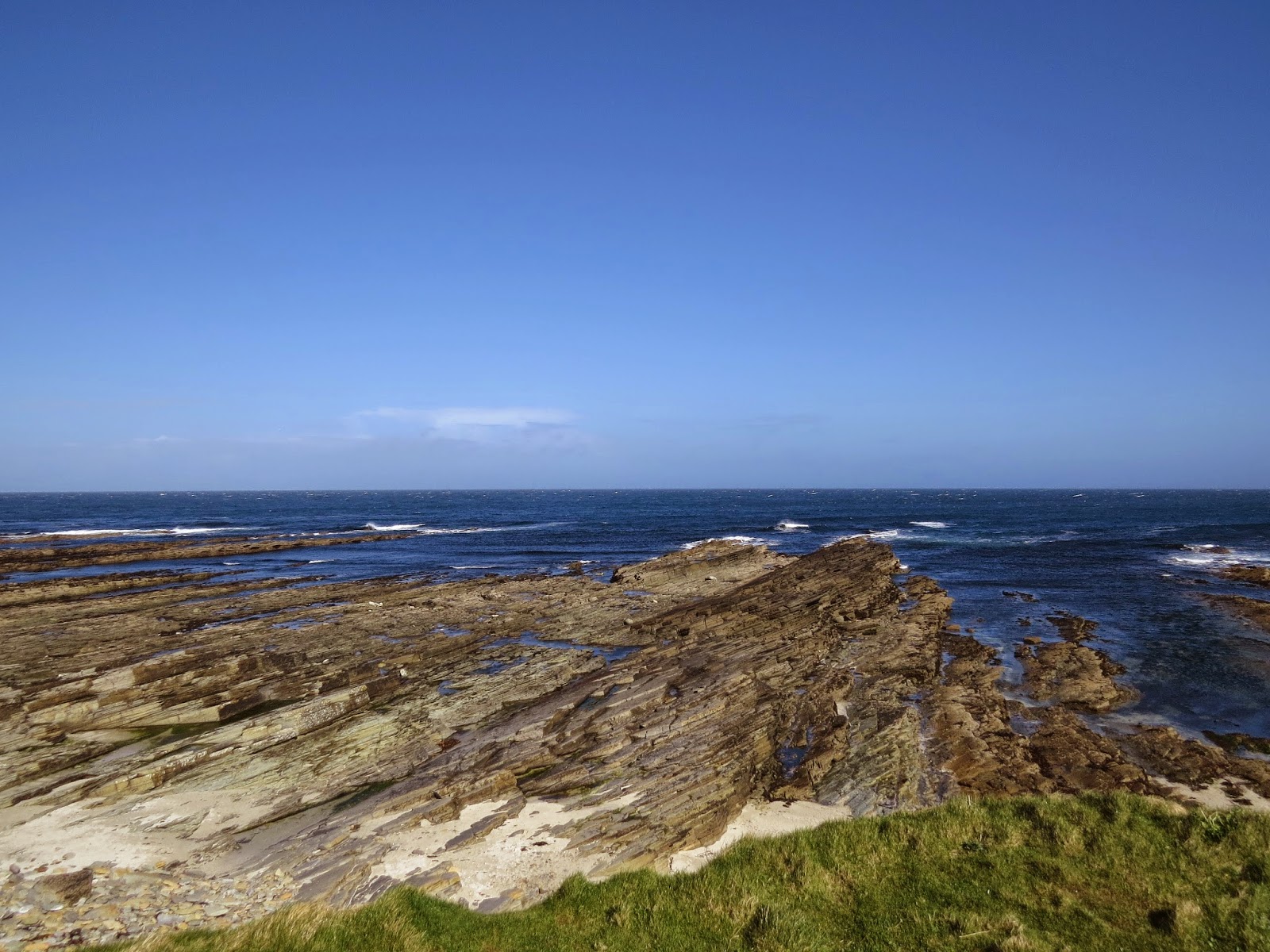 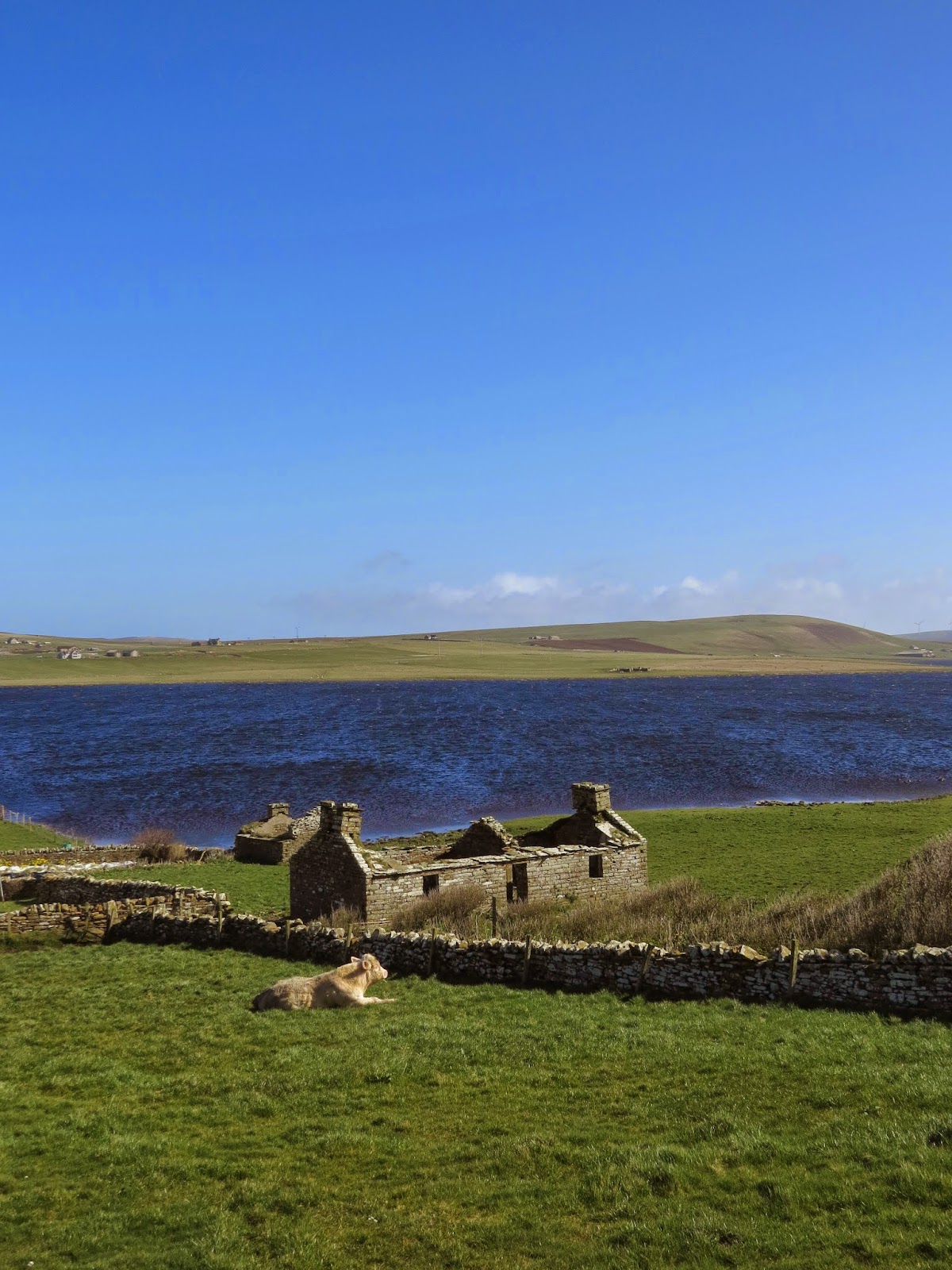 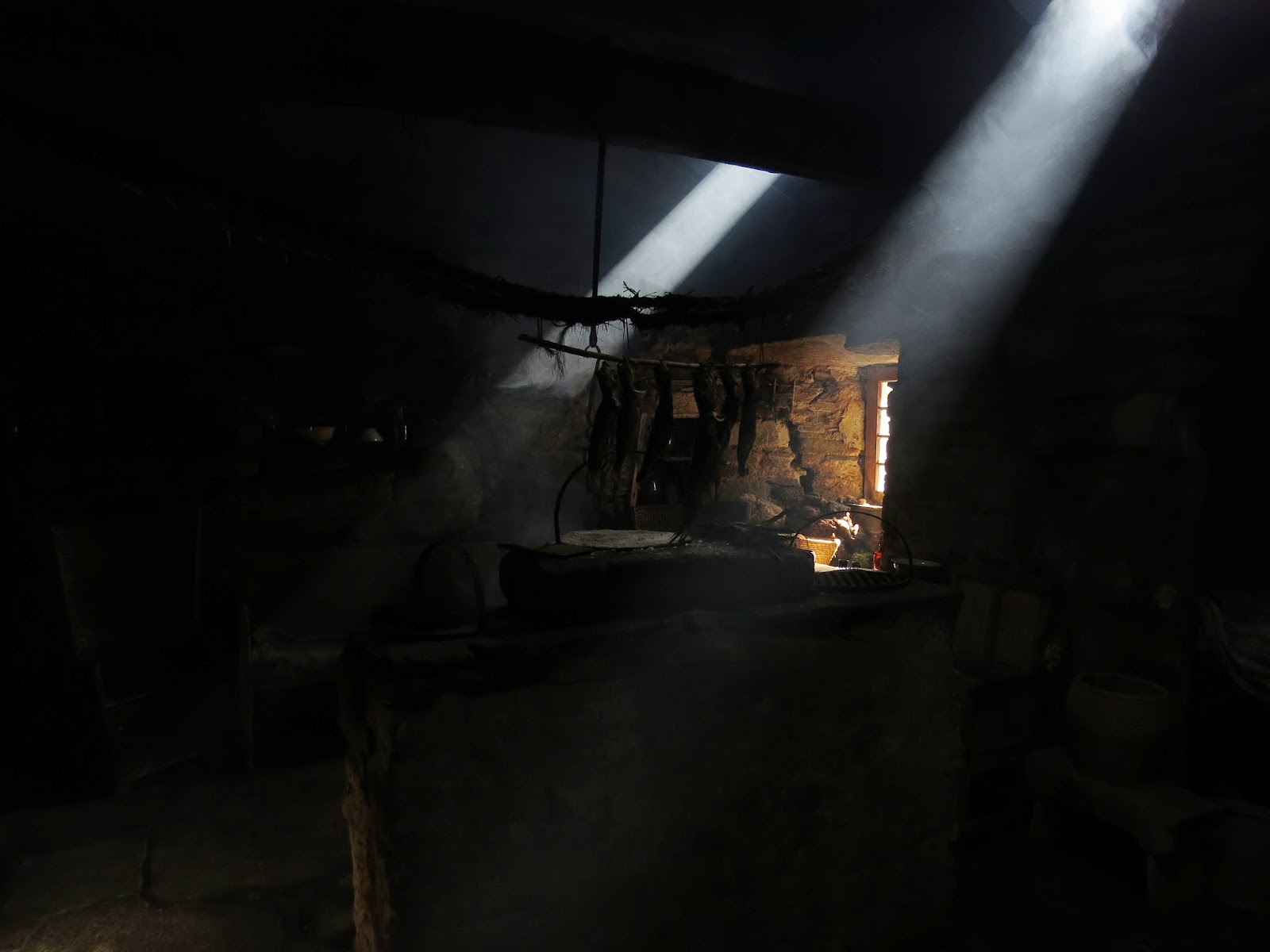 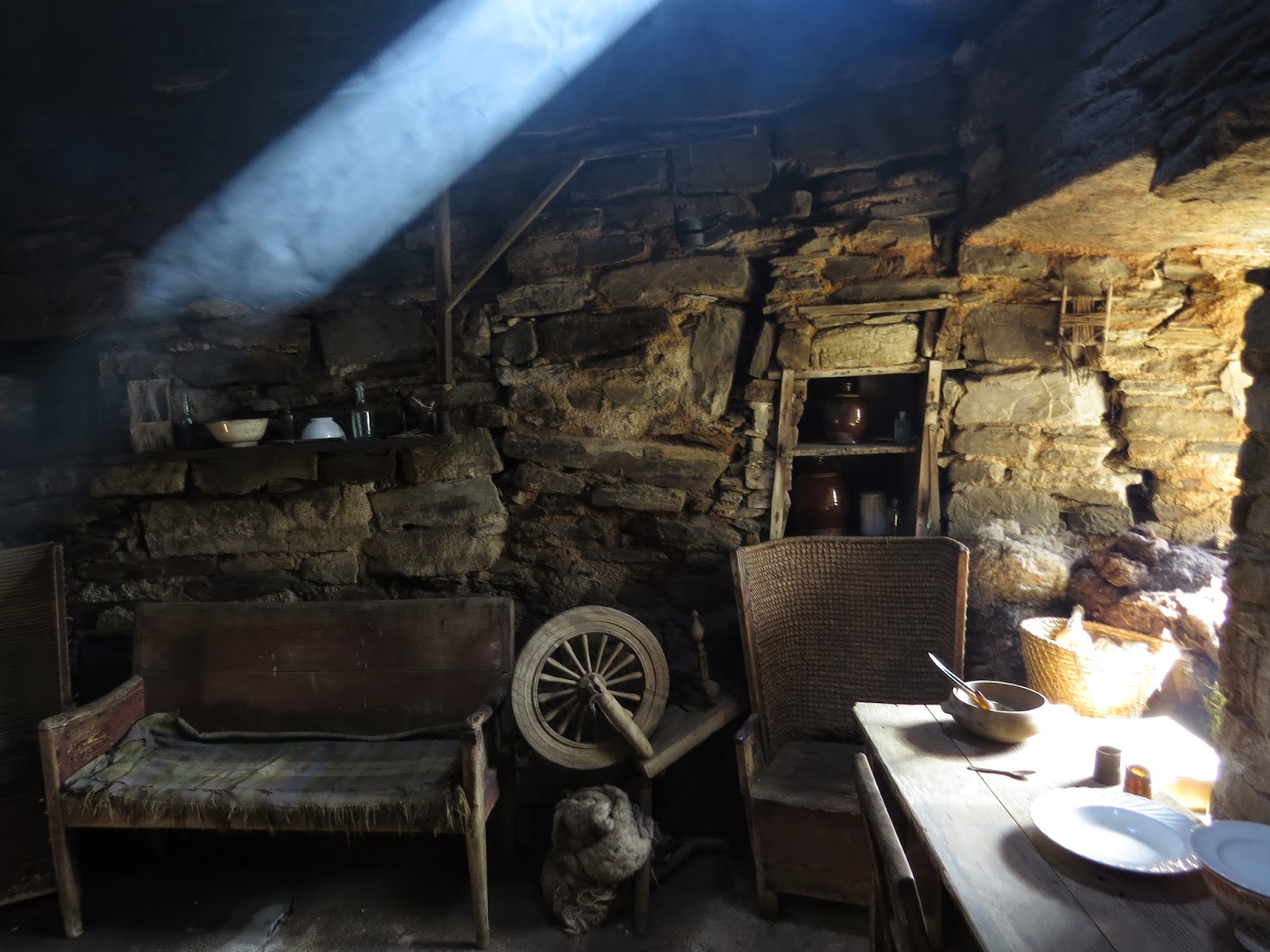 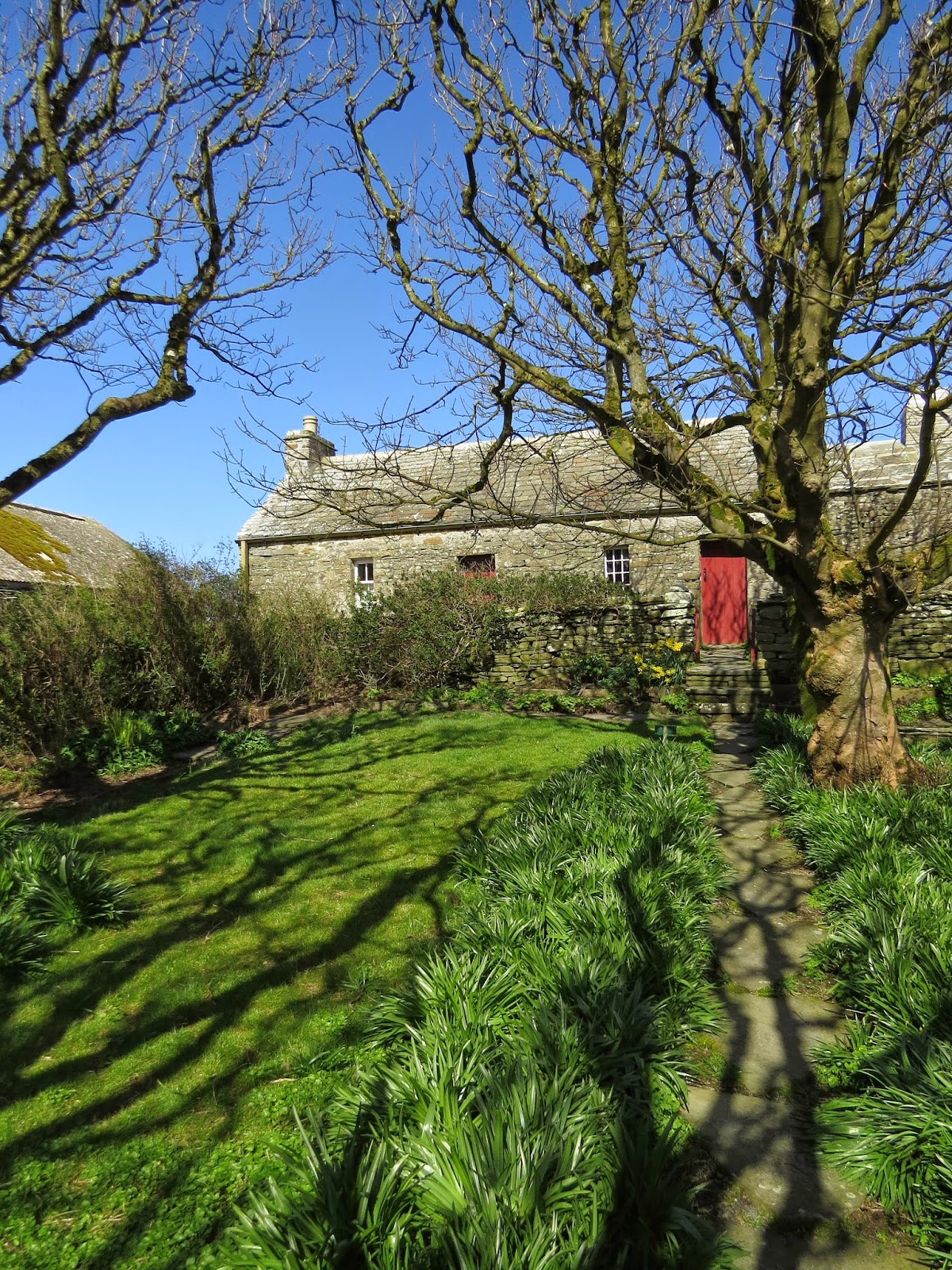 Right here we go, the Kirbuster Farm Museum was the all time highlight of my visit. I recomment everyone who visits Orkney avoids the tourist trail and heads here. http://www.spirit-of-orkney.com/contents1a/2010/04/kirbuster-farm-museum/ It is centred around the oldest house in Orkney which is where the first 2 photos were taken, known as a firehoose. I walked into here and it felt like revisiting a Neolithic monument, yet it is only 500 years old. At a time when grand mansions were being built around London, landowners in Orkney still lived and slept with their cattle around a central hearth. 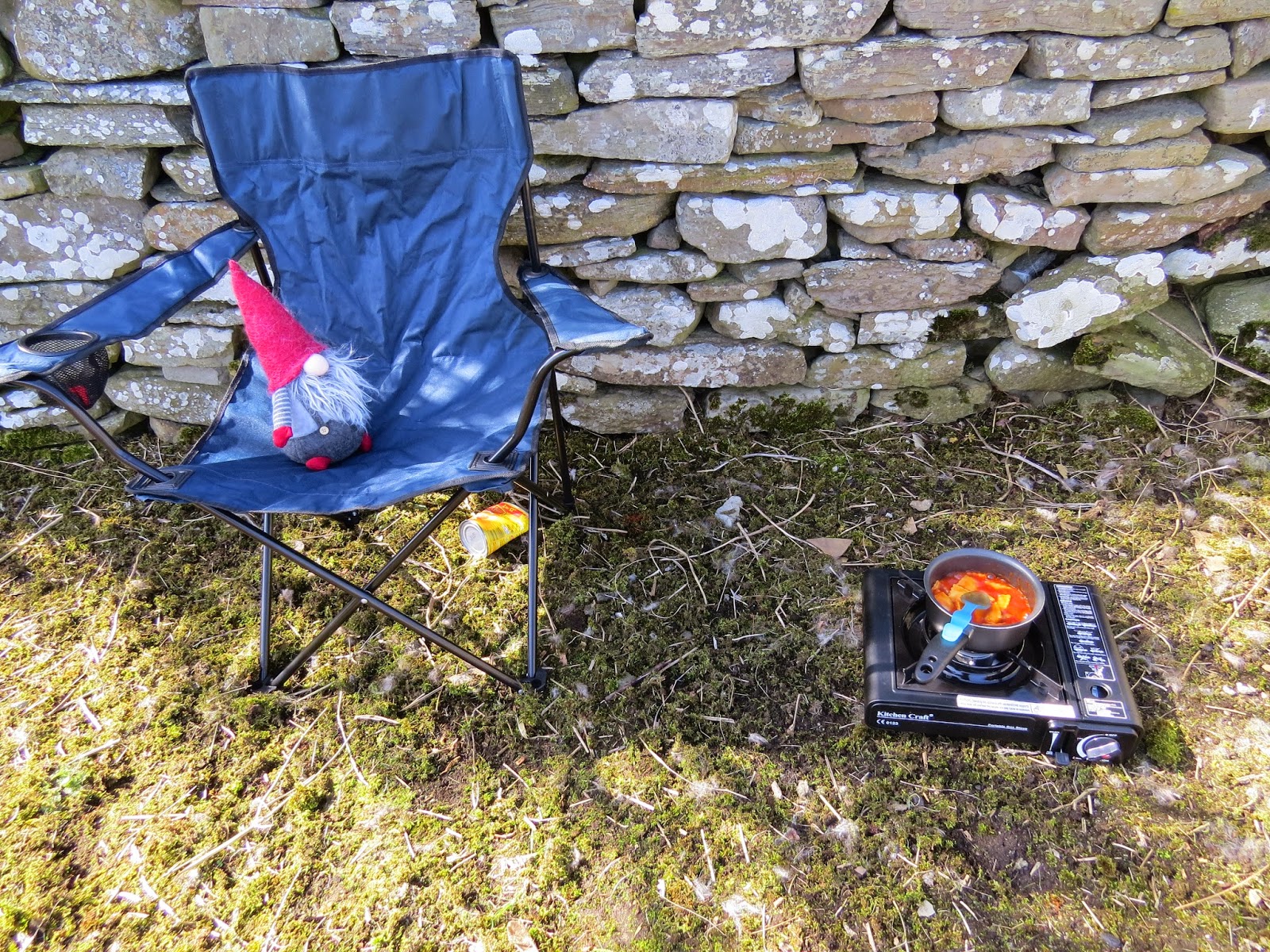 Lunch with a friend at the farm museum! 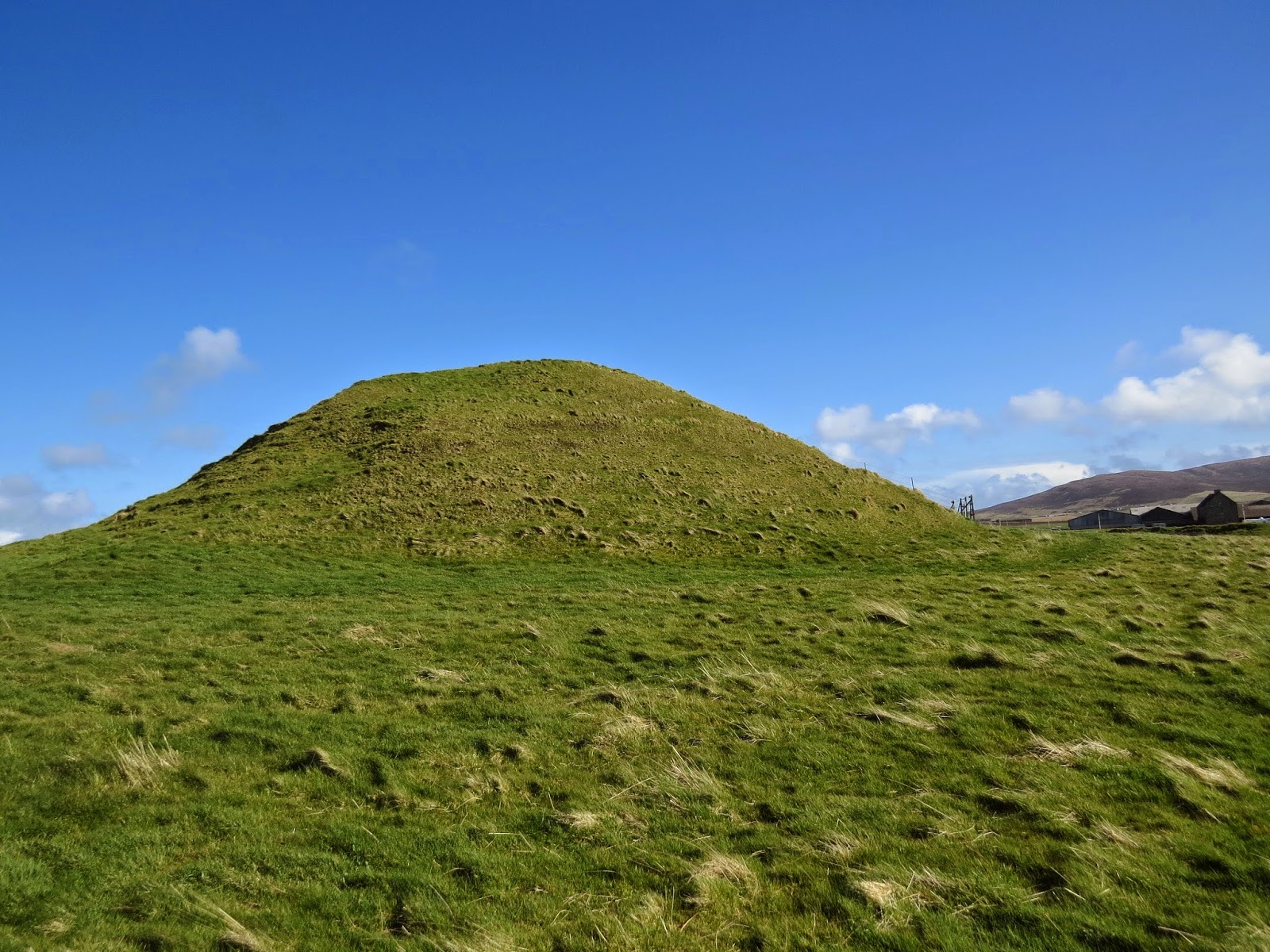 Maes Howe - which though spectacular was not as exciting as I'd hoped. 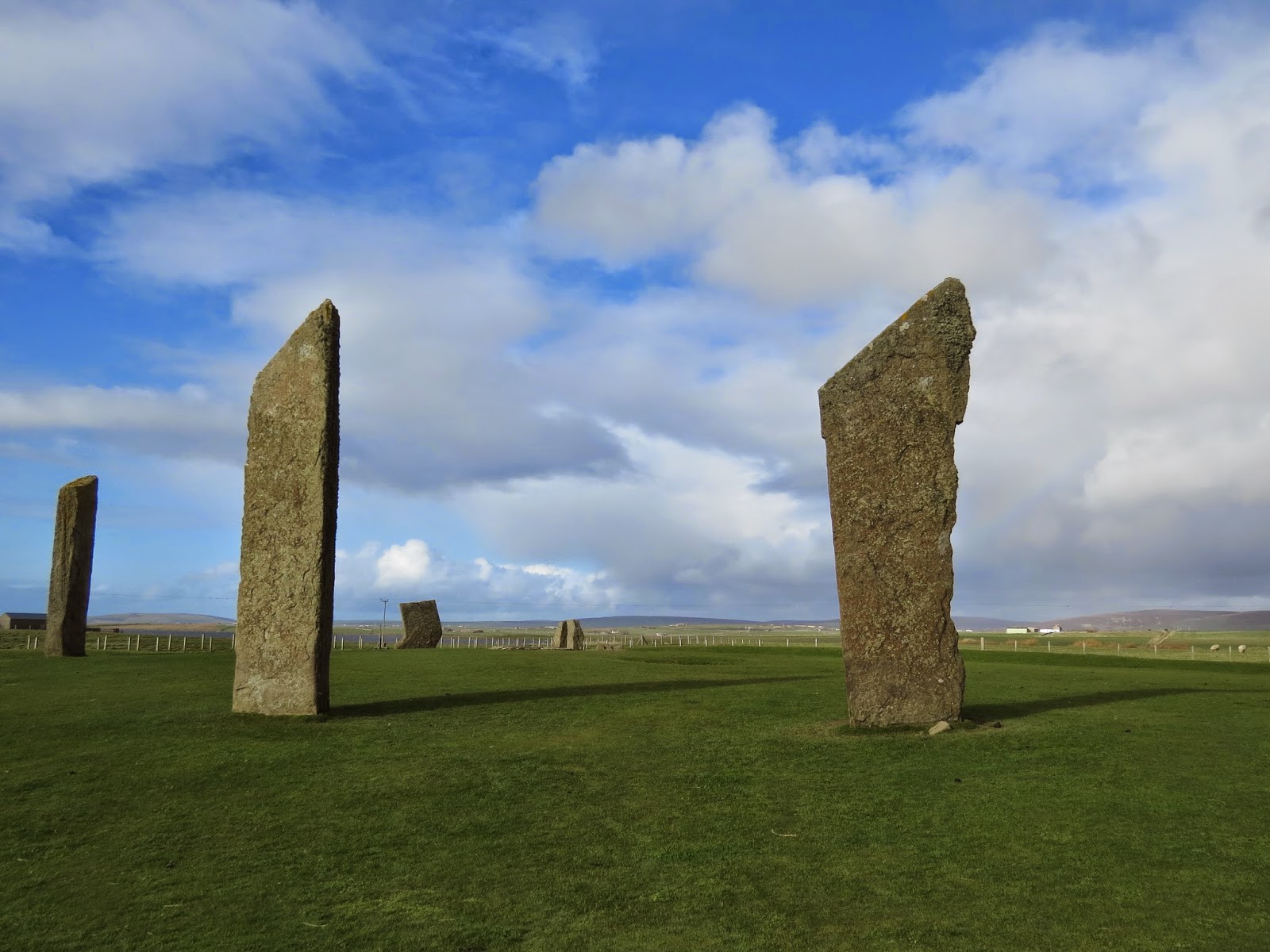 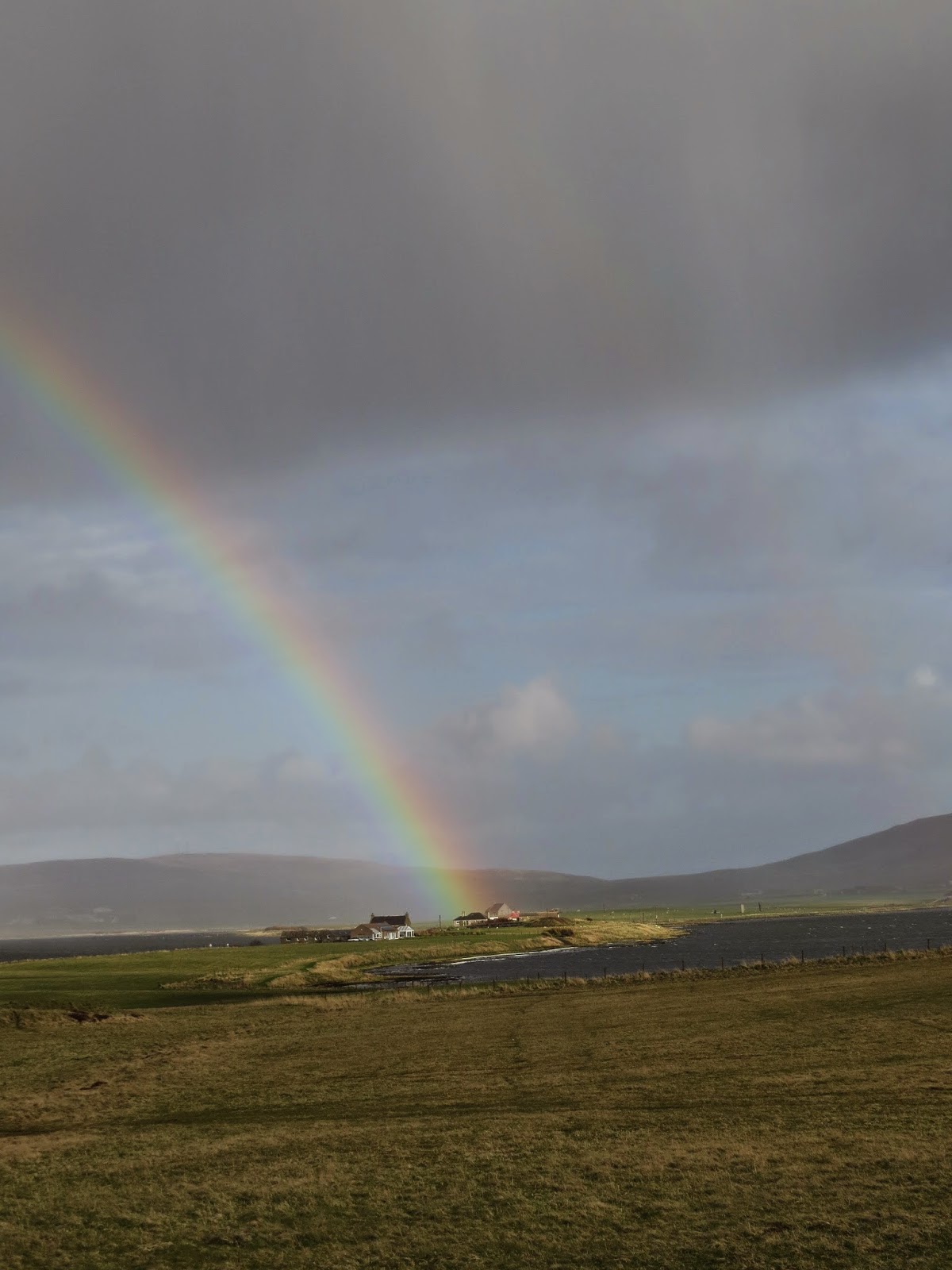 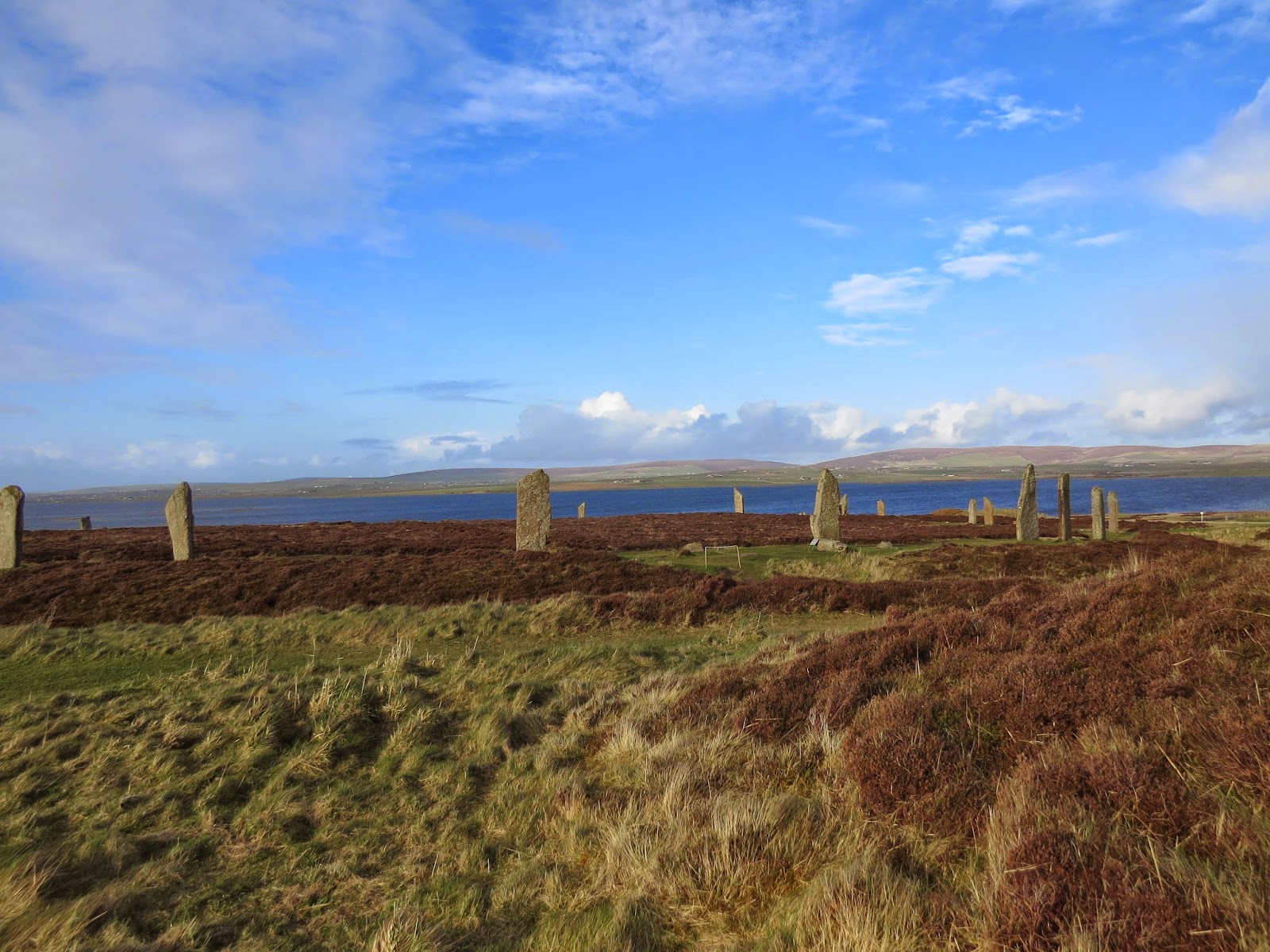 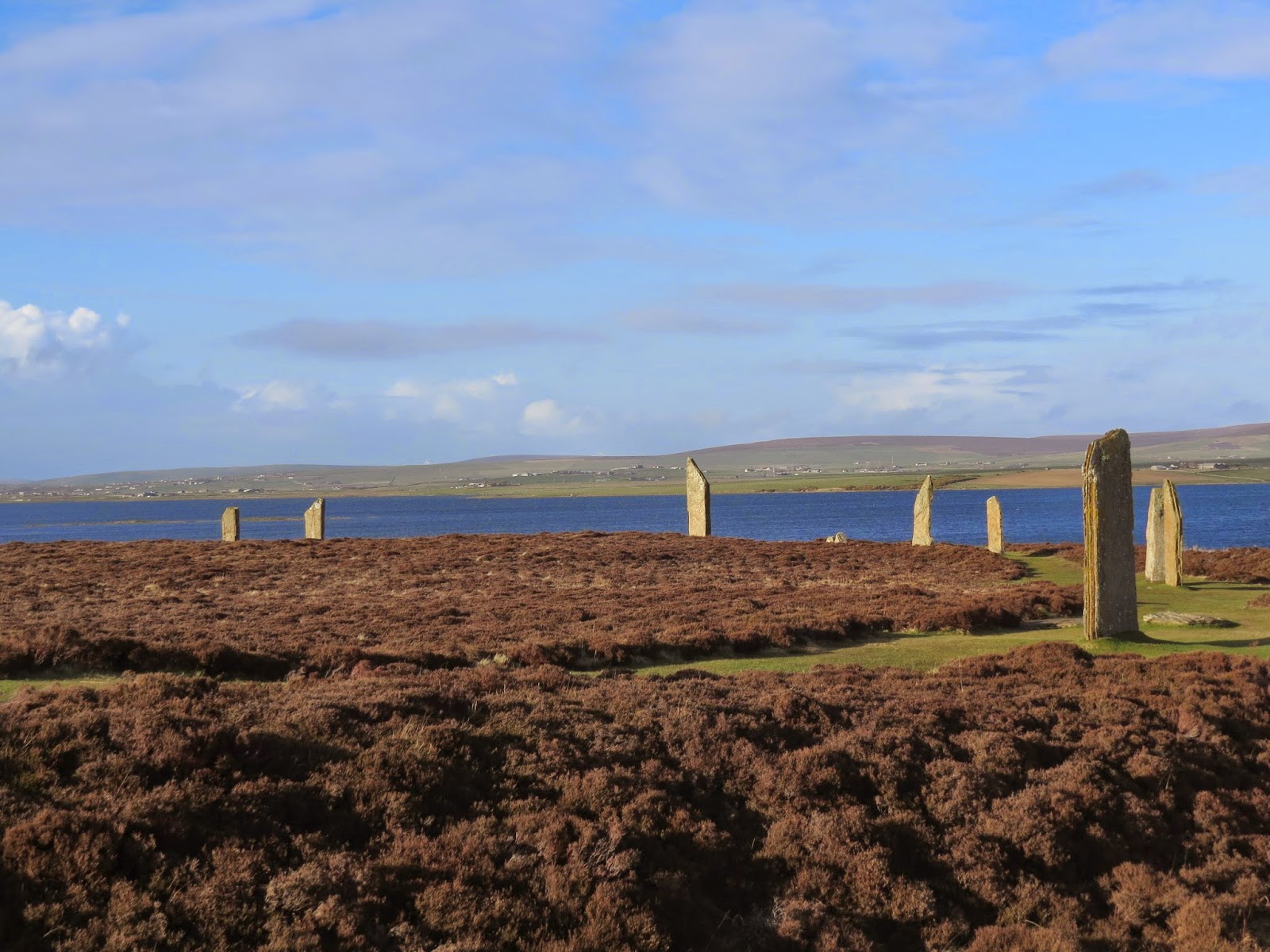 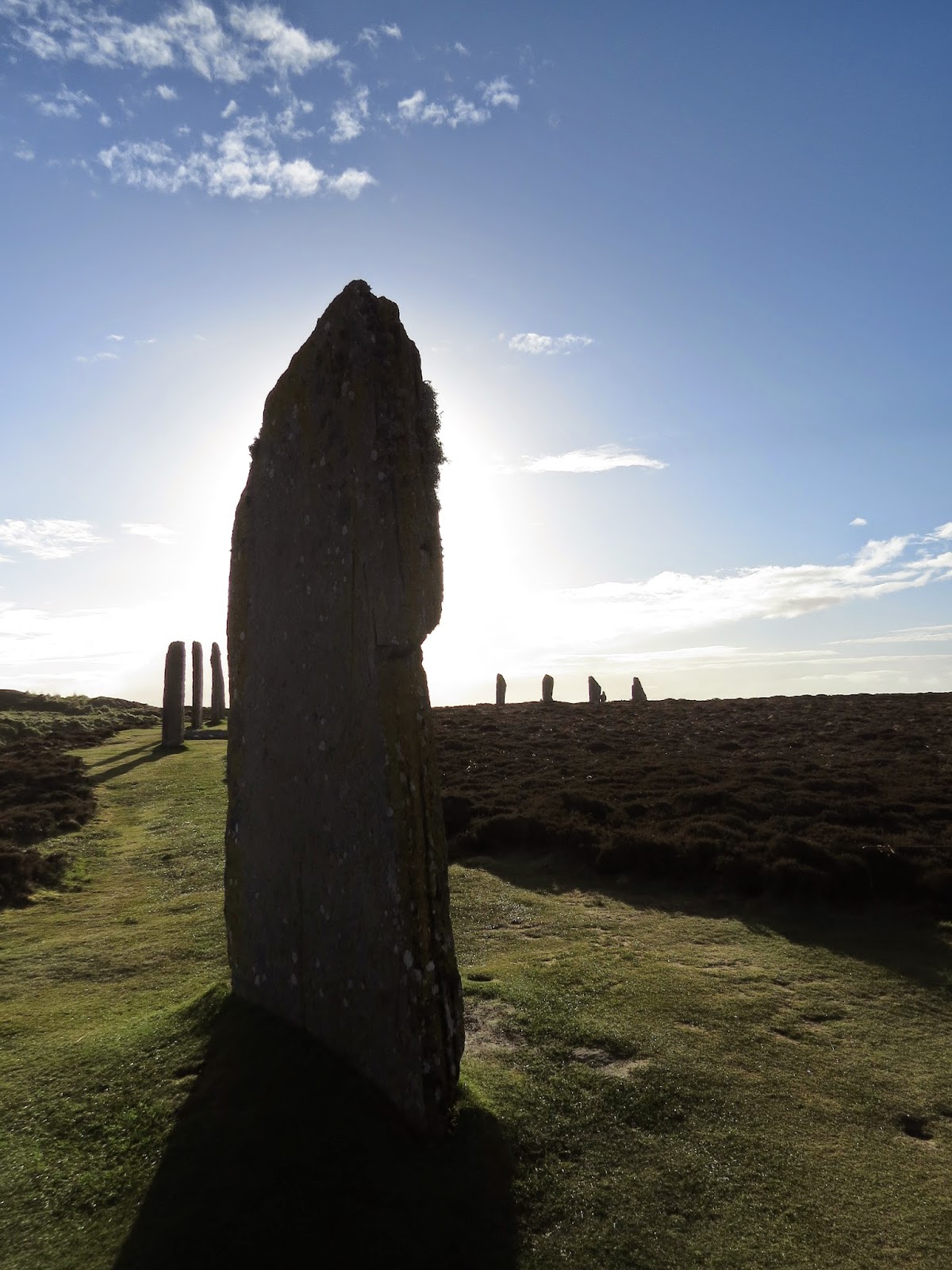 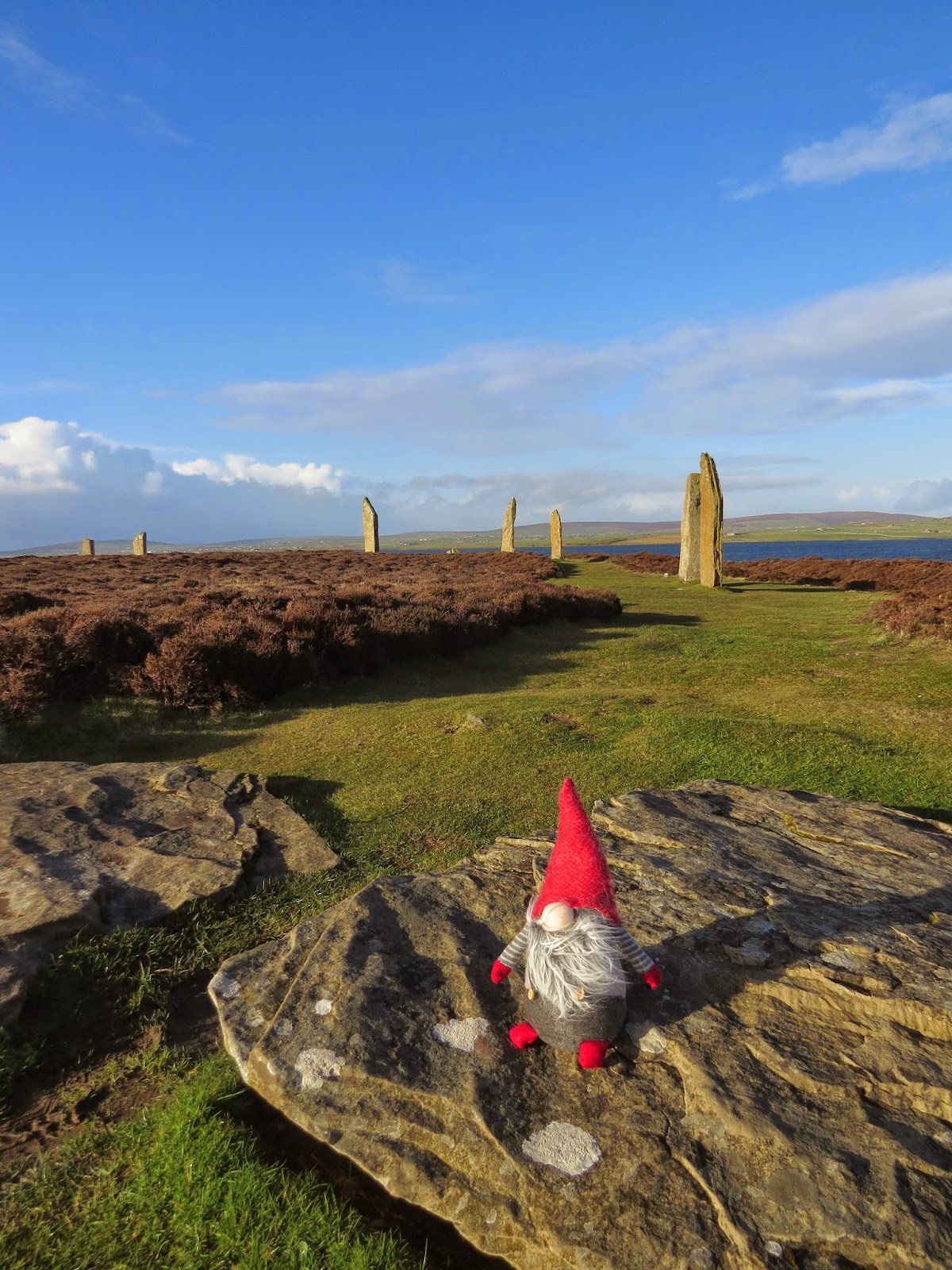 Many visits were made here in all weathers, Ring of Brodgar 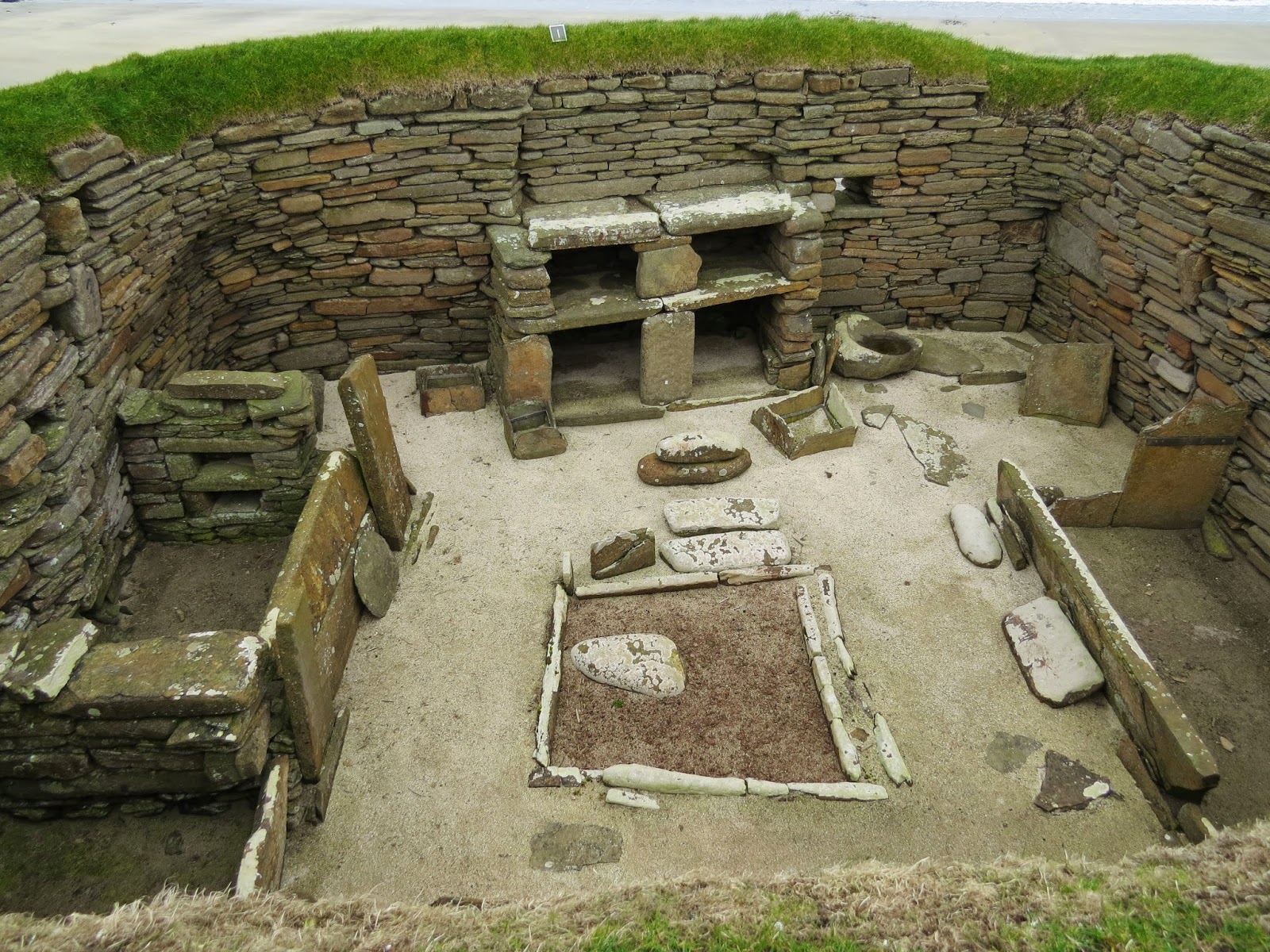 The one disappointment was my visit to Scara Brae - I'd expected a wander around the site but not it's is all cordoned off, rightly, but as a foil to the visitors, a 'visitor experience' trail has been installed. Great for the children or those who don't know much and are juts casual visitors. But walking along concrete paths and passing timeline signage only then to stand behind a barrier is all a bit too Stonehenge for me. But that is a personal view. What Scottish Natural Heritage and Museums face to preserve this site is immense. 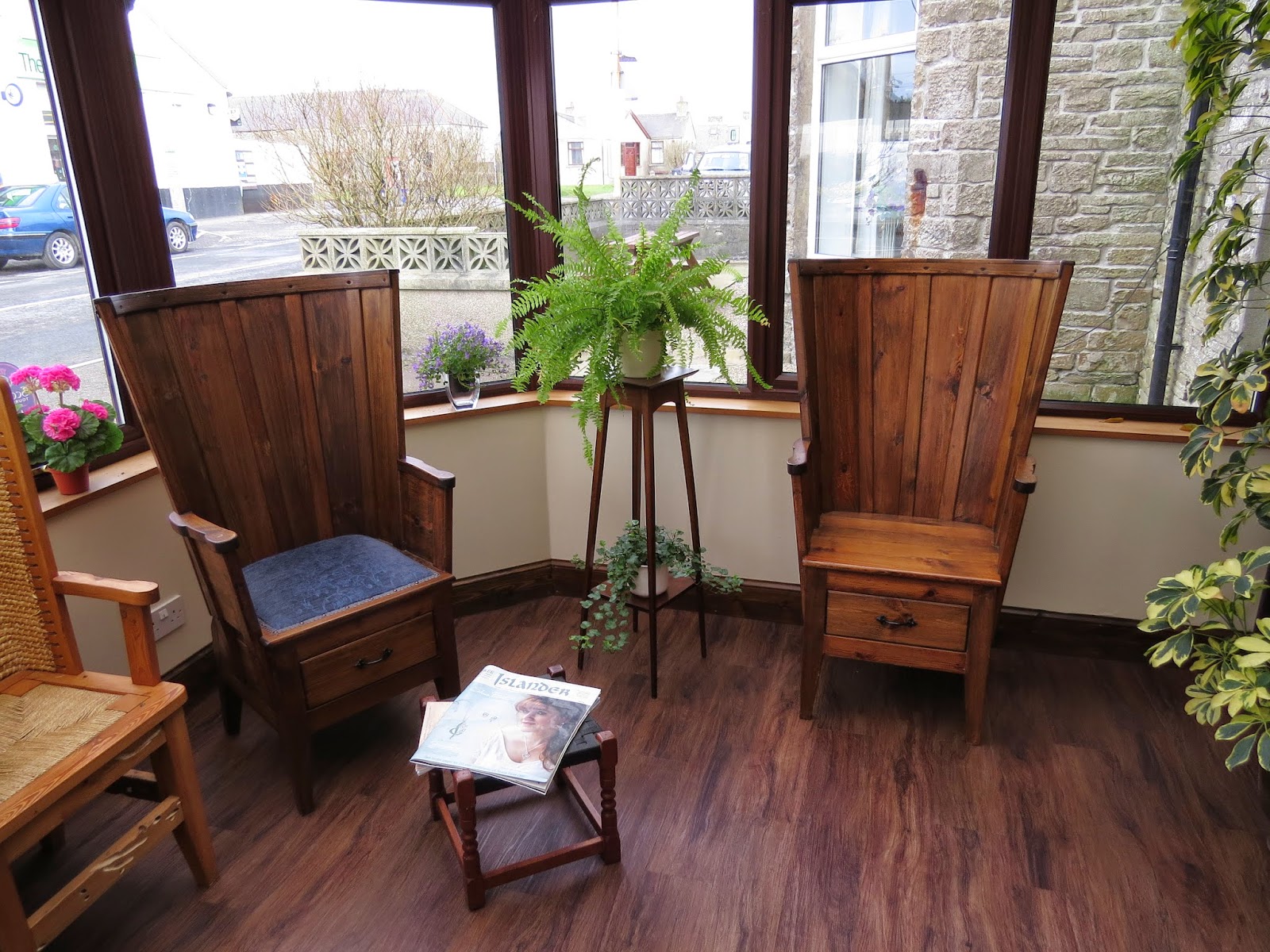 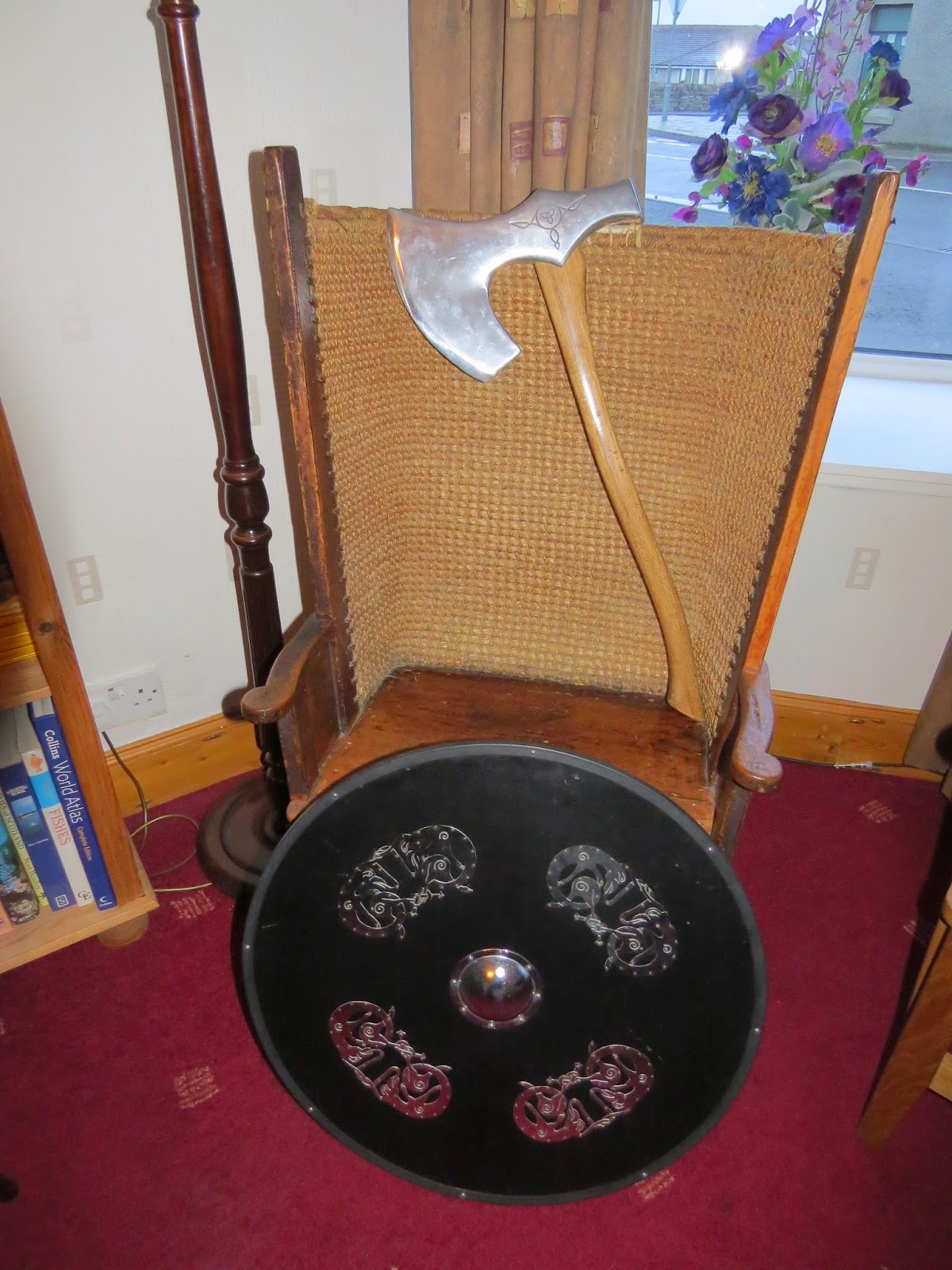 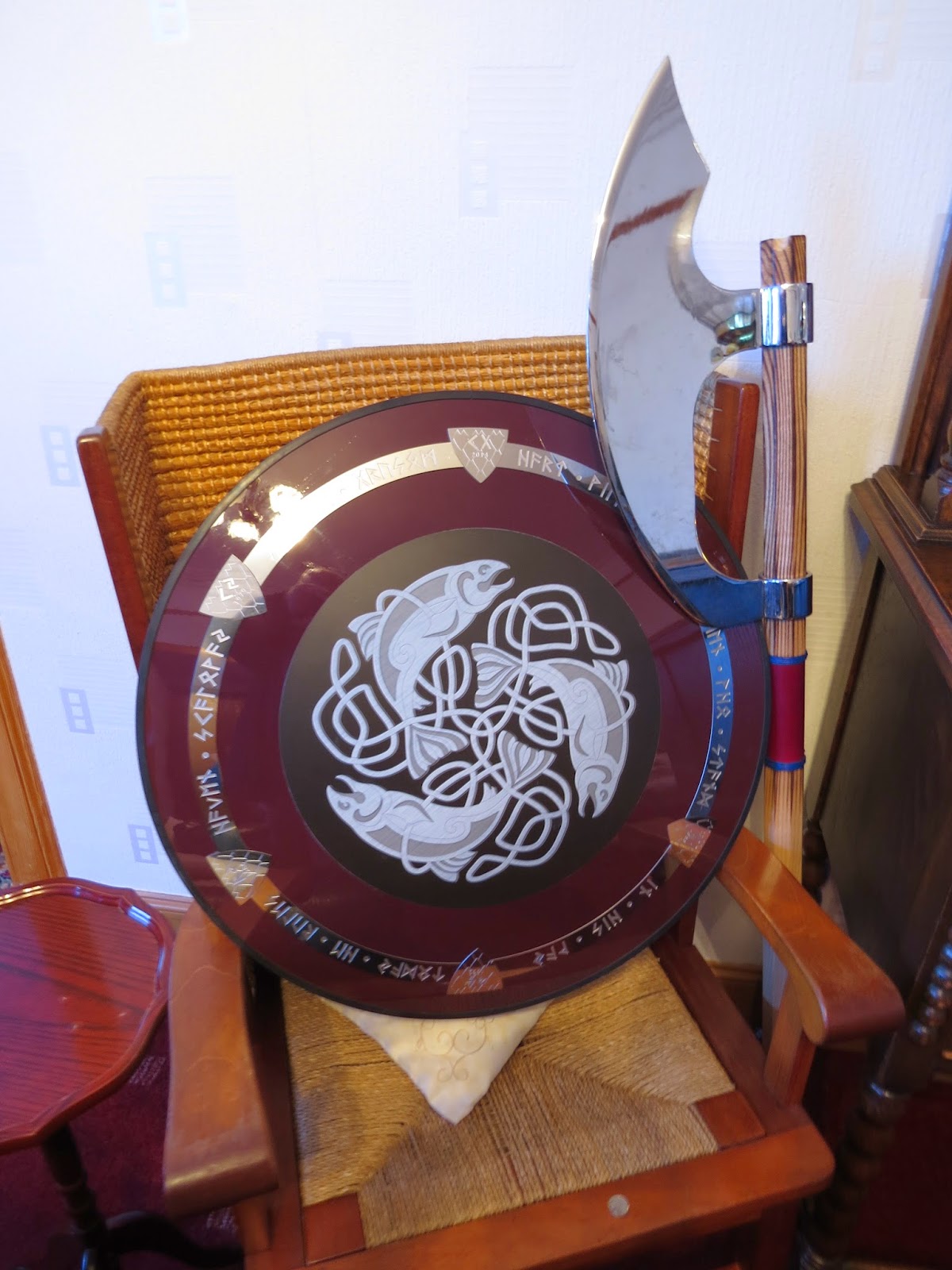 Finally juts before I left as a force 10 gale began to arrive some images of the hotel owners Helly Aa shields and axes he has used over the years both in Orkney and Shetland, plus the 2 Orcadian chairs he made a few years back. 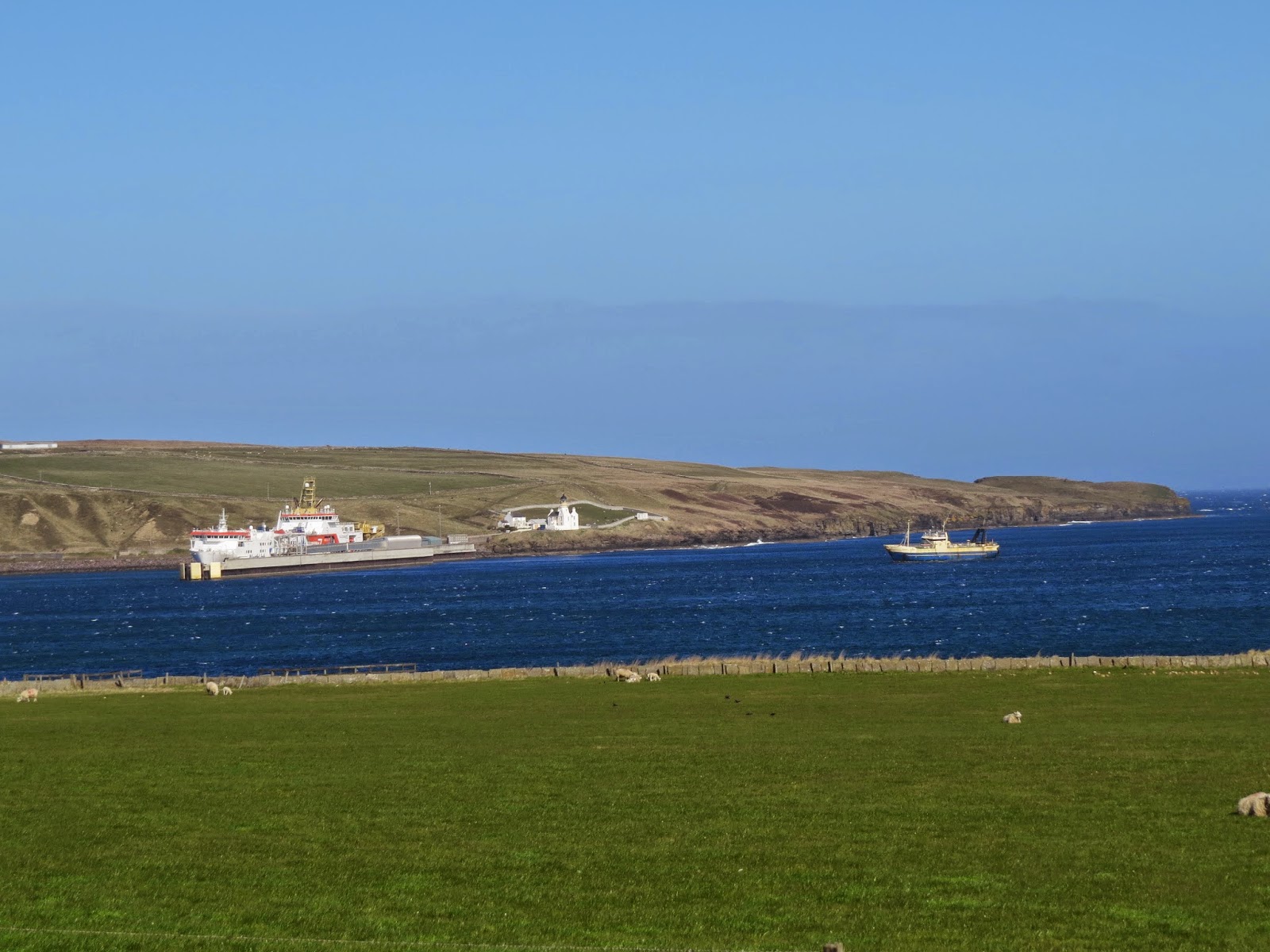 Nice to be back on the mainland - especially by 2pm after this image was taken the wind was at 60mph.

Posted by The Wessex Reiver at 14:03 No comments: