Believe it or not, this image below was taken at 5.45pm. It could be black and white but I assure you it's colour. As I write this at 17.50, lights on and it is absolutely lashing down. 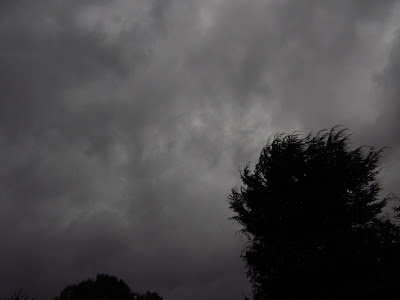 I was meant to be on the Malvern Hills today. Myself , Mr W (who presents Radio 4 wildlife programmes) and Mr C (possibly the best, but now ex BBC natural history librarian) had a long standing plan to head off to the Malverns and bag a ring ouzel or two. Migration is in full swing, I heard my first redwing on Thursday night. Mr W had been to the Golden Valley area of the Malverns during the week and saw 8 ring ouzel.

They say we can control everything other than death, repeats of Dad's Army and the weather. Yesterday a few hundred miles to the south ex hurricane Leslie was barrelling up the Atlantic towards Blighty. By Thursday this now tropical depression was intensifying, to the point where in Eire they renamed it Storm Callum. The media went wild, there was a hooley a-coming. Yesterday (the planned day of Armagheddon) in Somerset at least it was wild, but not as bad as everyone feared. Wales and the North West bore the brunt of it. Today the forecast was for strong winds and rain, thus we abandoned the Malvern birding day.  I awoke early and it was a fantastic day. Certainly it was windy, but the rain had gone, and by the afternoon it was sunny.

I sat in the garden for a while. Small pirouetting flocks of starling, gulls, pied wagtails, linnets and sparrows shot across the garden, energised by the tail wind from the tropics. Making a day at home seem worth while, just watching intently what was going on. Ominously, dark, quite menacing storm clouds began to gather to the south just before 5pm. Above me blue skies and white cloud, 10 miles to the south it grew foreboding.  The wind intensified (though it had been giving it some energy all day) and I watched. 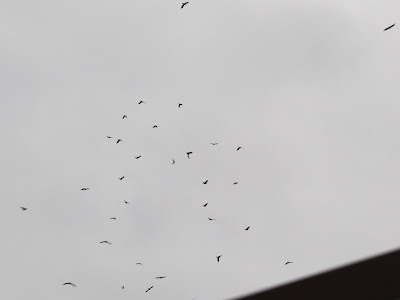 It is fascinating watching a weather system heading towards you. Suddenly everything changed. The sky was filled with gulls heading inland. Normally at this time they are heading out to their roosts on  Flat and Steep Holm islands in the Bristol Channel. Not today. The sparrows departed the feeders and one by one headed into the roof space of the house. And then I heard the familiar jak-a-jak-jack of the jackdaws, but nearly an hour earlier than normal. At the moment they are heading to roost about 6.15pm to 6.30pm depending on how light dusk is. But at 5.25pm I heard the first wave. How they pass the house each day is always the same.

The first and often the biggest wave is a ragtag flock of about 50 to 100 birds, and can include rooks, in the image above. They are very noisy, chaotically formed as a flock with no obvious pairs visible. These are probably the family parties coming in with less experienced birds, maybe this years young with parents, unattached adults, older birds. This organic melee of individual birds flies as a single uncoordinated mass high up across the sky. Then, about 10 minutes later, pairs of jackdaws fly in but instead of a flock, a minute long stream of 20, 30, 40 paired up birds flying very low, very fast and in a direct straight line. Often these birds are silent, and in the morning when the process is reversed can be so low they are below roof height. Like black darts past the bedroom window.

My guess, and I'd love to know for sure, is these are the dominant breeding pairs. The first wave are the scouts and pathfinders, checking the landscape to allow the second wave unhindered predator free airspace. But after this second wave it isn't over, there is a third. About about 5 minutes after the dominant pairs scud through, a second wave of paired jackdaws fly in. Obviously paired birds flying together, but higher up, in a more relaxed movement. Ostensibly each pair seemingly unconnected with those pairs around them, but they call repeatedly as they fly by in a single well spaced out group,  forming something of a coalition flock, as in the image below. 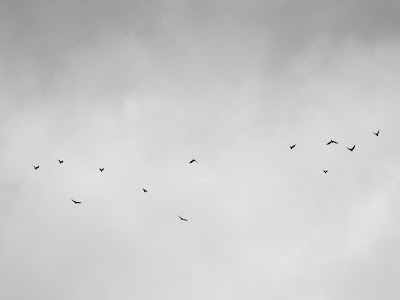 I may have missed out on a day birding on the Malvern Hills, but I absolutely love watching the jackdaws across the house each morning and evening. Their pre-roost is on Worlbury Hill about two miles away, and very noisy it is too. But the main night roost I've never found. I have my suspicions it is either by Kingston Seymour about 5 miles north of me, where I have observed jackdaws coming into a small wood at dusk. Or more likely, they fly up the coast to the extensive woods between Portishead and Clevedon, where there is a known mixed corvid roost.  I'm no Mark Cocker, but on reading his Crow Country, it warmed me to read he had the same trouble working out exactly where they went to, despite obvious clues. The trick is as with all things involving wildlife observation, planning, planning, and a lot of luck.

I didn't plan for storm Callum's arrival!!
Posted by The Wessex Reiver at 18:48 5 comments: