Corvid moments on the Mendips

﻿
My nature blogging has been a bit lapse recently. I say lapse, I really mean non existent. Increasingly I've felt the pull of blogger.com and so todays observational nature experiences prompted me to once again put finger to keyboard.
I found myself on the Mendip Hills in Somerset this afternoon, a sunny and clear blue skies day, marred somewhat with the strong winds blowing off the sea, not quite gale force, but lively. I had four hours to spend up there between chauffeuring the current Mrs Dawes for a horse trek to the pub and back. Ample time for a bit of a nature ramble myself. Or so I thought.
Birds were on the wing, but that wing was an rocket in the making with the strong wind. Time after time I observed little brown jobs clinging to posts, wobbling like fruit jellies, before exhausted they flew off in an pirouetting arc. The swallows loved it in the wind, as did this buzzard.
I've seen buzzards hover like kestrels many times, but this one using the strong winds blowing in from sea level to 1000 feet was a superb hoverer. Can't really show what mastery it had of the air in stills photographs but the passing swallow helps show its immoveable position. Great to see. 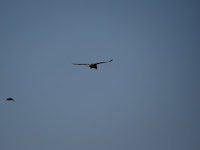 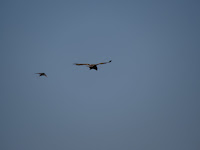 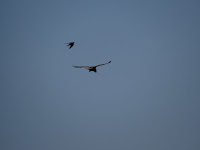 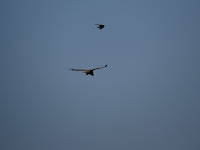 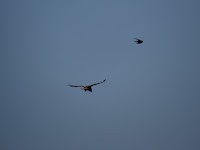 It was while watching and attempting to photograph the buzzard that about half a mile away in a Forestry Commission plantation I heard the unmistakable jack-a-jack-jack of alighting massed jackdaws. A quick count revealed around 100 jackdaws hurling themselves into the air, wheeling and jack-a-jack-jacking, family groups of adults and this years young, bonding, learning where the land lies and knowing corvids, just having a nice bit of fun. They rose and then landed back in the conifers twice, before the whole flock roe and flew overhead at speed in the wind. I never saw them again. Given corvids penchant for being site faithful this new area for me bodes well for winter corvid-roost-at-dusk dusk soirees.
﻿ 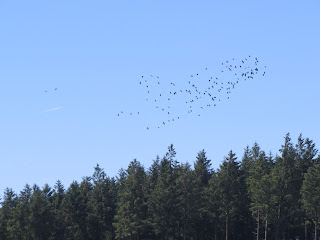 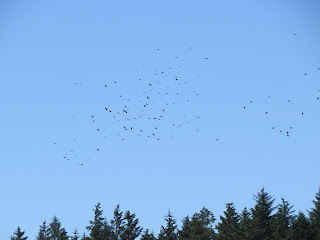 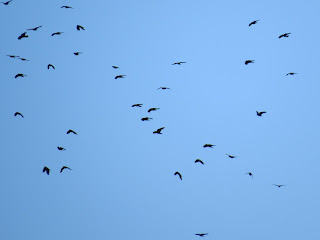 But that wasn't the end of it. Jackdaws may be my favourite corvid, but they are closely followed by the raven. Or as todays treat became, 4 ravens, a pair and two juvenile. How I wished I'd been closer than about half a mile as through the binoculars their behaviour was fabulous, sadly the imagery less so.  At first all I heard was a buzzard 'mewing' and that familiar cronk cronk somewhere in the same trees as the jackdaws. But then four ravens flew out. Their typical languid flap and glide interspersed with dangling legs postures and wheeling in the wind , calling.  Nearby was a huge beech which all four flew into separately. I could hear their contact calls, a sort of muted carrion crow caw is my only way of describing it. I had some recording equipment with me but it was too windy and they were too far away to record.﻿ 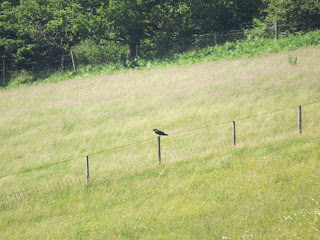 Eventually the two younger birds flew out and landed on the fence posts splitting the field. One flew off almost immediately and back into the tree, but one stayed around for a while, allowing a long shot or two.  The adults flopped down onto fence posts under the beech tree, and at this point had little interest in the younger birds. All the while I could hear their contact calls, though not able to see which bird was making them to which bird. It's such a pleasure to watch ravens, possibly our most intelligent native wild bird. Their communication vocabulary has been estimated at over 100 different calls, many so subtle they are heard only in captive birds. 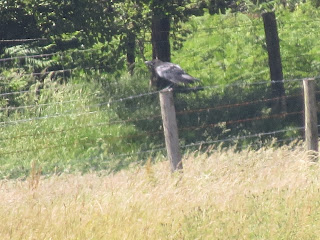 Eventually through boredom, change of location, fancied a change, I don't know but the two adult birds flew off and for around 10 minutes flew around, over and wing touching branches flyby the beech tree. Still calling their subtle contact calls, never the cronk cronk, I watched mesmerised through the binoculars - they were definitely enjoying the strong wind, but a bit of family bonding behaviour was adhered to the joy. 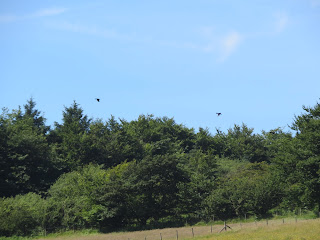 All too soon all the ravens departed and that was that, I was left with the chittering swallows and jelly wobbling sparrows on the gate.
A brilliant afternoon waiting for the horses to return.
﻿ 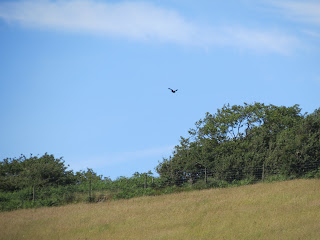