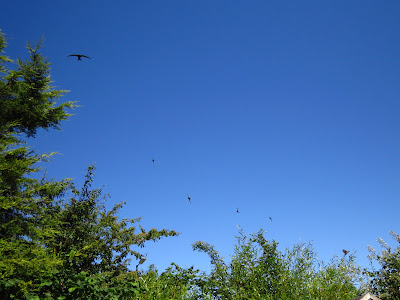 Well I think that's definitely it. 2017 will go down in my memory as the summer of swifts. For you see we have had them nesting for the first time in the roof space of our house. On August 11th I heard the last screaming's of three around the house and on August 16th after not seeing a swift for a few days a solitary swift could be observed feeding over the garden amongst the chit chattering house martins. Since then, nothing.
For a few years now there have always been swifts around the house in summer. Screaming by but I always thought their nests were elsewhere. In early June however I found myself being attacked from all sides in the garden. So low and fast were these avian bullets travelling that I could easily hear their flup-flup-flup wing beats as they scudded by. Then as if an illusion (or one too many ciders) one flew in only 8 feet above then ground before rising like a jet fighter under the ridge tile and gone, out of sight, silence.
Swifts usually arrive here on May 3rd, this year however it was lunchtime on May 4th. I keep a keen eye and ear open for their return around May Day and so it was that as I looked up from my pasty that anchor shape scudded across the sky. Then to my amazement few minutes later my first scream...from a swift I may add, not me. Unusual as they normally only scream around the nest site but I guess these African travellers were joys joyous on their return to Somerset.
Over the intervening four months I've learnt much about swifts (and realised for such a common bird I knew little). They go in for banging, not in some death metal stupor, but aerial stalling, used as anti predation defence. I learnt that kestrels are their main predator in Europe, as they sit and wait for the swifts to arrive at the nest. Clumsy of foot, the swift is at its most vulnerable as it lands before waddling into the hole or cavity where it's most rudimentary nest is housed. I saw no kestrel predation in Somerset, but did witness the resident sparrowhawk repeatedly flying off to the nest with fledgling house martins. But that's for another day, swiftly moving on then...
What I witnessed in Somerset was swift routine. Around mid summer I could set my watch to them. Between 6am and 10am they'd leave the roof and circle endlessly around the house, flying not more than half a mile away. My house is close by the neighbours (also with nests I discovered) with a 10 feet gap. I'd stand at the bedroom window before work and watch the swifts fly in like fighter bombers one after another at eye level. Then seemingly about to hit the window they'd sharply veer left and scream through the gap between the houses and away. 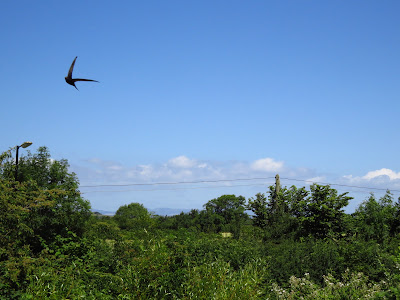 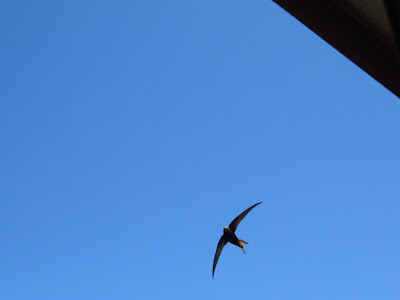 In the evening likewise. During the day the swifts disappeared, presumably to forage over the farmland or head up high into the air for a spot of sleep. Then at 8 pm sharp they'd be back screaming around and around the house in ever decreasing circles. The highest count was 17, so not a huge colony. Around 9pm they'd begin to do their low level practice runs. Over the shrubs of next door, swoop down over our lawn and then swish up onto the gable end of the house. For half an hour I could stand on the lawn and repeatedly have swifts pass just feet above me on these reconnaissance ﻿missions. Each time they'd stall in flight as they grabbed onto the wall, only for a second later to drop like a stone, pick up speed and fly back the way they came, this time though only 3 or 4 feet above ground in the opposite direction.
It became a magical evening each day to witness this.  But then the finale (and I'd read this happens), two swifts would come in together, just half a body apart. Research estimates they fly together only 0.25 seconds apart. As in the dummy runs before, the leading swift would come into the gable end, stall  (the banging)  and cling to the wall, for then a millisecond later its partner stalled but this time up and into the roof. A few noisy chattering's from the pair before the first bird then dropped off the wall and away. This happened between 9.30pm and 9.35pm for over 2 weeks. Astonishing repetition and presumably why in Europe the kestrel has worked out how to obtain a light supper before bed.
Most times when the bird had entered the roof, its mate would fly by one more time screaming (often accompanied by screams form within the roof) before I'd watch it fly off and up into the clouds. As both sexes share the natal duties, I have absolutely no idea which was male, or female.
This all went on for around a month until one evening in late July I came home from work and ventured outdoors. What a commotion from roof tile 5 as I'd christened it. Swifts were agitatedly flying back and forth, screaming encouragement and then silence, they'd be back, silence before then more screaming. But then a wing tip appeared from under the tile, then a bit of body, a foot, a wriggle and a squeeze, all the while the adults flying noisily overhead. Before like a stone the bird dropped out of the roof, gathered speed and flew off to be joined by screaming birds. I watched it's progress as it joined three others, the now four swifts flying in very close formation in a direct line. A family group almost touching wing tips as they flew in a tight group, higher and higher out of sight. I'd witnessed a fledge and stood there in the now silent garden, mesmerised. I can't put into words how exciting that was to witness a swift take its first wing beats, on wings that will never stop beating for three years or so. Astonishing. 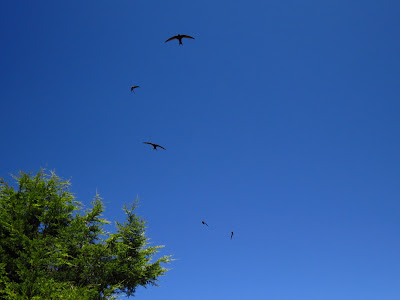 While writing this I've been glancing out of the window over the fields (the aesthete in me says it was to gather thoughts by gazing into the distance in a melancholy. The naturalist in me says it was just to try and glimpse a swift one more time in 2017). But no. House martins and swallows a plenty, a noisy carrion crow and the ever present sparrows hoovering up seed like its going out of fashion, but no swifts. There are still reports of the odd swift locally, but in late August they'll be well on their way to Africa. As it should be.
Adieu then until next May my lovelies, it's been a blast.
....with the last word going to Richard Jefferies, from his book Field and Hedgerow,
"Dark specks beneath the white summer clouds, the swifts, the black albatross of our skies, moved on their unwearied wings"﻿