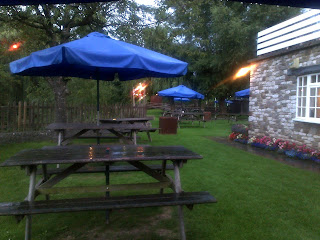 As I sit here writing down these thoughts I am the only person sitting in a pub garden. When I arrived not half an hour ago there were a dozen or more tables occupied outside. Ten minutes ago the first drop of rain hit the vast umbrella looming out of and over the table where I am sitting; within a few moments I was left to myself in the now deserted garden. Like swarming lemmings people scurried to the door, clutching glasses, supper plates, even a cocker spaniel. Presumably the inside of the pub now resembles an unopened sardine tin. Occasionally the pub door will open and a head will emerge, look around, exclaim “Ohh its pouring” before disappearing back indoors offering advice that it is "bloody awful out there" to anyone who will listen. However sitting outside in my isolated majesty, I'm perfectly dry, it is heaven.

There is something I love about rain on a canvas tent, or on a car roof. Cocooned away from the deluge I can let my mind wander and simply enjoy the sensorial pleasure of the pitter-patter on the umbrella surface, like a thousand ants performing a choreographed dance.  Occasionally a rain cooled breeze gently and momentarily caresses a corner of the newspaper I brought with me. All too soon, possibly exhausted by the headline, the breeze subsides and the sheet lies flat again. I am outside, but I am protected. Protected enough to allow my sensations to connect me to the elements of weather but not exposed enough to develop the frailties of the human body into a chill.

I've long loved being close to rain. It could be my Nordic ancestry, fair skin burns easily so I avoid sunshine. But, I think it is a throwback to my childhood. My parents owned a static caravan in the middle of Northumberland. An escape pod for my father, removing himself from the grey exhaustion he suffered running his business. On Friday afternoons the bell would ring and I would be collected from the school gate, clamber into his Austin Maxi and find myself, in no time at all, 40 miles away having tea while looking at the vast Coquet Valley ahead of me. And it often seemed to be raining, except on a Sunday evening, when more often than not as we were packing the car to come home the clouds would part and the valley would then be bathed in a golden shimmer.

As a seven year old, that lifestyle of spending weekdays in a semi-rural part of the Tyneside conurbation and every weekend being in that wild and windswept part of Northumberland seemed the norm to me. It was only in later life I realised that in 1971 not many people went away every weekend.

But then like now I remember the sound of the rain. I'd lie on the bench seat which doubled as my bed listening to the pitter patter of the raindrops on the aluminium roof. Most were repetitive, but occasionally a louder drip from an overhanging tree would dischord the pluvial orchestra. If like tonight the weather was warm I’d open the window too, top hinged it allowed the rain to slide down its outer surface like miniature waterfalls. I’d trace their formation and slow gravitational fall into oblivion time after time again; a metaphor for all life it seems.
Above where I lay there was a gas lamp which hissed as it gave out its weak yellowish glow. I'd lie there for hours just listening to the rain. I was unaware of anything else. It was a comfort. At the same time a cooling breeze would envelop me.  At night the rain would often stop and the landscape would suddenly become alive with a frosting of moonbeams highlighting a million raindrops on foliage as they glittered in the breeze. It was magical, something I will remember to my last breath.
Rain and the sound raindrops make often have a specific place in the heart of the writer. Peppered throughout literature are passages and poetry to the experience of rain, indeed the opening paragraph of Charlotte Bronte’s ‘Jane Eyre’ begins with a dull day when the arrival of ‘sombre rain’ has curtailed any further exercise outdoors and Jane hides herself away in a window recess behind a thick curtain.
“Folds of scarlet drapery shut in my view to the right hand; to the left were the clear panes of glass, protecting, but not separating me from the drear November day. At intervals, while turning over the leaves of my book, I studied the aspect of that winter afternoon. Afar, it offered a pale blank of mist and cloud; near a scene of wet lawn and storm-beat shrub, with ceaseless rain sweeping away wildly before a long and lamentable blast”.
Such a wonderful and powerful description of the effect weather has on our emotions, a wet November afternoon both stupefies and enhances our mood.
When I read it for the first time one of the most evocative descriptions of rain comes from Thomas Hardy’s 'Far From the Madding Crowd’. As sergeant Troy sleeps in the porch of the church a rainstorm intensifies.
“Presently the gurgoyle spat. In due time a small stream began to trickle through the seventy feet of aerial space between its mouth and the ground, which the water-drops smote like duckshot in their accelerated velocity. The stream thickened in substance, and increased in power, gradually spouting further and yet further from the side of the tower. When the rain fell in a steady and ceaseless torrent the stream dashed downward in volumes”
That water gushing from the church gargoyle onto the new grave of Fanny Robin causes the mound of soil ‘to boil like chocolate’. Sergeant Troy comes upon this after waking and is distraught with remorse for the errors of his ways.
For me I find this interesting, because most reference to rain in literature is seen in a negative context. Rain curtails exercise; rain is often a metaphor for death or melancholic moods. I however find rain fascinating, uplifting and above all something of the natural world which if we looked at in a purely scientific way, is the foundation blocks of all life on Earth, water.
The sound rain makes also somehow deadens the cacophony of human noise we are relentlessly subjected to these days. As I lay on that caravan bed listening to the rain, I also heard silence outside, that silence changes ever so perceptibly with the ebb and flow of rainfall intensity. Soft rain the sort of rain which if outdoors coats everything in dew-like droplets is gentle on the ears, almost silent. The rainfall of summer storms roars its presence like a lion of the Savannah.  No too experiences of rainfall are the same, I like that; there is an orchestration of sound going on out there, conducted by nature, as nature sees fit.
And so as I ready myself to leave the pub garden, in the 40 minutes or so it has taken me to write this on my Blackberry (no doubt with revisions and corrections at home) am I possibly the only person in Oldbury Upon Severn who has experienced the emotional sensation of raindrops on an umbrella tonight?
We are offered but once in a lifetime to be on this planet, to experience sensations most people shun for the safety of inertia, is for me what makes us alive. As a famous saying goes
"Life is not about waiting for the storms to pass...it's about learning how to dance in the rain."
Posted by The Wessex Reiver at 05:35 4 comments:

Can I interest anyone in a short walking experiment I wonder? I'm interested in sound and how this affects the natural world. However we humans are part of this natural world too - do we understand sound and what it does to us? 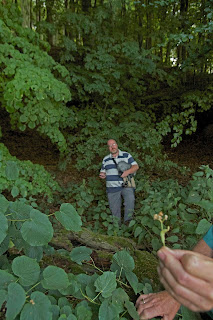 If you are I may do this down on the Somerset Levels in early September in the morning/or evening on the 9th (or 10th) depending on the weather. I can confirm further details if I get any takers. And if you're wondering what the plan is, then although very much informal, we'd meet and I'll suggest what I hope will happen, then we'll set off for a walk in silence for around 45 minutes, then a collective de-brief. And that's it and you can then go an enjoy the Levels.

This is just something I'm interested in doing and may lead to something else, but for the moment I'm just looking for some guinea pigs to test out thoughts in an informal and I hope enlightening experiment.