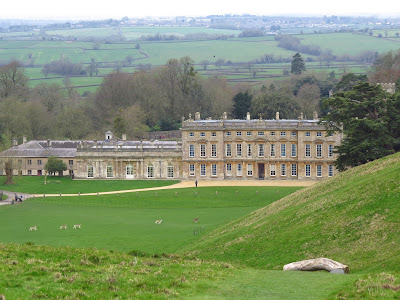 Anyone who knows me understands that while I'm a wildlife lover, corvids are my main interest. All of this stems from my days down in Dorset a decade or more ago, when rooks would flood into the garden on blustery mornings and I'd sit mesmerized by their behaviour. Often for hours on end. Around the same time I recorded and produced a Living World on jackdaw research at Cambridge and became absolutely fascinated at how intelligent these relatively common birds are. 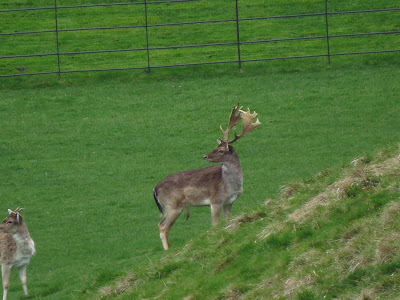 Which may seem odd that this image is of a buck fallow deer at Dyrham Park near Bath. I was here for a meeting and after this decided instead of pootling back home I'd wander about this estate, somewhere so close yet for all the time I've lived down here I'd never visited until last November, again for a meeting. So, meeting over, I got the bus back to the carpark, hurled my laptop into the car and decided to walk back down to the house. My journey was interrupted by a small herd of fallow deer running hither and yon across the estate. A couple of bucks and maybe a dozen females. I know they're not a native species, but nice to see nonetheless. However it was while watching these I heard the first soft crooooop cruooop of a raven. 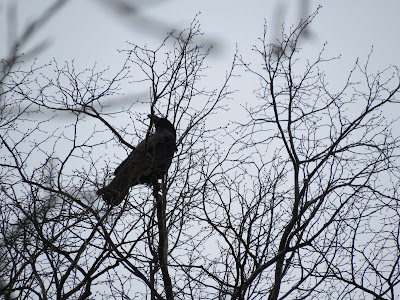 At first I had absolutely no idea where this was coming from other than behind me. I spun around and coming down the valley was this big fella. All the while soft contact calling to an bird which I never saw. But I think it might have been in a large Cyprus tree. Why did I think that? Well this raven alighted in the Cyprus and let out a number of contact calls. I couldn't see anything else as the needles were too thick, but given in the lowlands ravens love to nest in big conifers, an educated guess makes me think. After five or 10 minutes this raven then flew to neighbouring trees, calling again, then flying past the Cyprus and back to another tree. Amazingly ravens are thought to have over a hundred contact calls and today this chap was using a number of them. Soft whistles, a range of varying croop croop, a sort of low pitched whistle and many more. 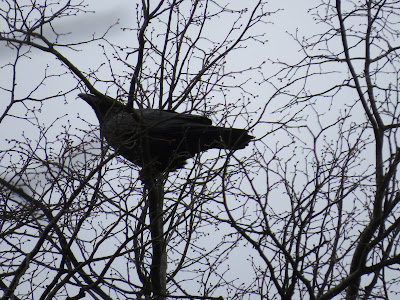 This image I love. The tree was immense, and tall, well over 50-60 feet or more. And on a slope. I stood under another tree and using my camera's fancy electronics managed a few images. But this one is my favourite. It just says, don't mess with me. Though of course we should never use anthropomorphism. Joining in with the ravens regalia, a general corvid cocophany was taking place where a number of rooks and jackdaw were either holding territories or like this pair down by the cafe, pair bonding. Impossible to show in a still image but the top bird was doing a lot of tail waggling to her mate below. This chimney stack is obviously prime real estate and a good display is definitely needed. Recently it's been suggested that jackdaws can interpret a human stare (Jackdaws are almost unique in birds in that they use eye movement for communication). I wonder then what they thought of me sitting below them, staring up at all this intimate behaviour... human voyeurism I bet! 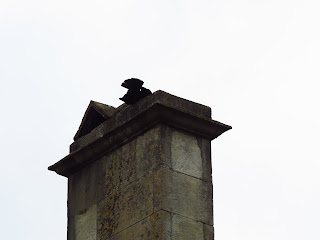 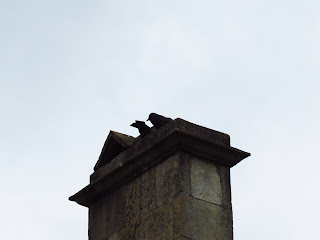 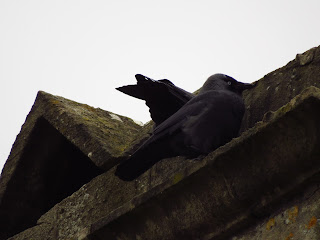 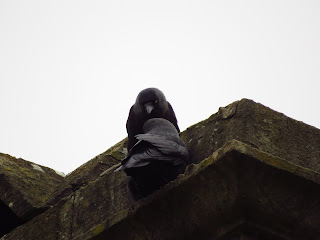 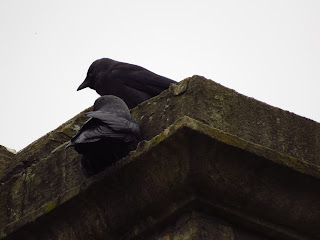 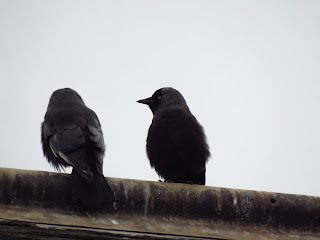 Posted by The Wessex Reiver at 17:11 No comments: