We missed Snowmageddon, until it turned Red

It has been bitterly cold down her on the Bristol Channel area of Somerset, but apart from a light dusting that didn't stay around for long, we'd missed much of the Beast from the East. Until March 1st that is, when we joined much of the rest of the UK in Snowmageddon.
I knew snow was forecast on Thursday, so abandoning the car, I boarded the 07:30 train into Bristol to go to work. Yes it was snowing, but nothing much. Around 9am, soon after the bacon butty and coffee to warm up, I had a text from Mrs Wessex_Reiver saying, the amber warning has been upgraded to Red, a danger to life and limb,  and over exactly where we live.  Not due until 3pm, but downloading stuff onto a pen drive by 11am I was heading home. In the 3 hours the temperature had really dropped but worst still the wind was gusting 40mph and my walk back to the station was absolutely bitter. 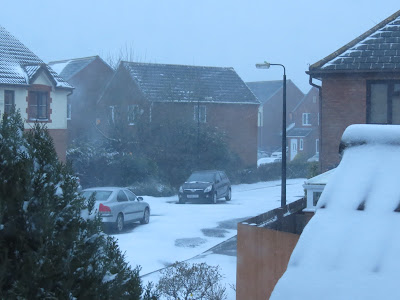 For the first hour I was home it felt like a damp squib. Ostensibly working on the laptop, my eyes kept observing the lack of anything happening outdoors. No snow, the wind was lively, but that was it. At 1pm I thought I'll have some soup and while stirring the victuals, a flake hurled itself across the window. Not the great saucer sized flakes we get normally here, but the size of a speck of dust. By the time I'd consumed the aforementioned broth, it was a whiteout - strange powdery snow blowing up, down, left, right in the strengthening wind. And it kept coming, and coming, and coming. ﻿
﻿ 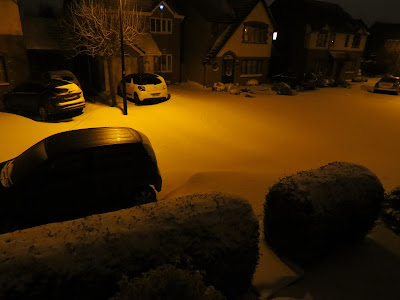 We get a lot of storm force winds here but I've never experienced a night like it, near gale force winds propelling dry crispy snow across the landscape. In some areas the snow was literally blown away, in others it lay feet deep, often just feet from each other. So the volume of snow was low, though it made for an exciting night. The above picture was taken about 4am when the snow had finally stopped. 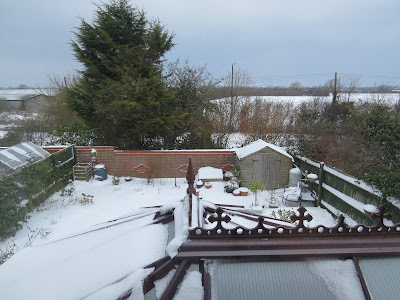 At 7am the sun came up - oh yes, it was snow all right. Not in the league of friends up in Northumberland who have had monstrous snows, with 12 drifts making roads impassable.  But for here, a microclimate area where snow is a rare thing, it lay 6-8 inches deep, deeper where drifting off the fields had occurred. A home day then. 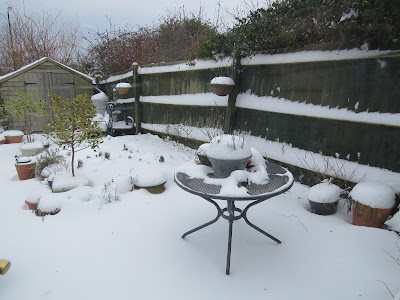 Having a very important Data Protection spreadsheet to do, I of course ventured immediately outside to take some images. It is fully seeing snow on pots and fences, where only 24 hours earlier there was nothing.  And I can't remember ever seeing icicles down south. Used to get huge ones when I lived near the coast in Tyneside, but down here an inch is a goodly length. 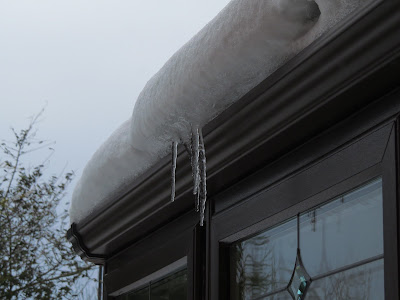 The soft powdery snow was wonderful to see in its drifting patterns, if it had been a free day I'd have bobbled out into the fields to see what shapes lay there. But with work beckoning, just a mooch around the house then, with a scientifically accurate depth measurement for the record - half way up my rigger boots... I'll suggest this important scale to Carol Kirkwood I think. 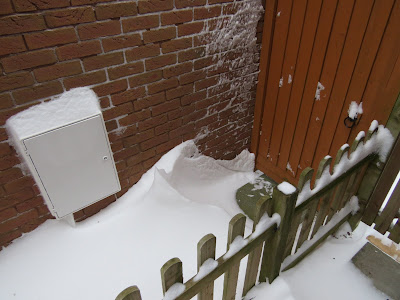 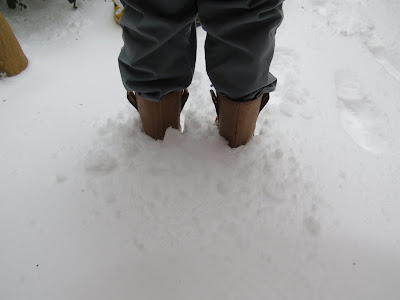 So there you go March the 1st we had snow, March 2nd it's still here. I really do feel for all the people trapped in cars and trains, but to be honest, this is how winters were until the early 1980's. I remember endless snowstorms and trudging to school in blizzards (the schools didn't shut then because we all lived nearby including the teachers). We lived opposite the golf course and spend days sledging there each year. But for the last three decades we've not really had winters. People have moved out into the country, moved away from home, or just decided to commute for fun, so this proper snow is a nightmare. I remember the late great Willie Poole saying of people who were moving to Glanton in Northumberland and commuting to Newcastle 35 miles away "just wait until we get a proper winter again, they'll never get in" Well poor old Northumberland has had a week of battering and no let up yet - stay indoors, stay safe. 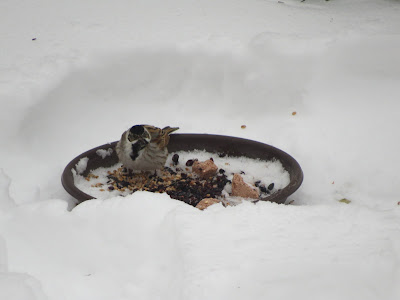 It's not all doom and gloom though, this reed bunting was a real treat - only the second record for the garden. Redwing and fieldfares loafing about and this very territorial blackbird chasing anything that comes near away.  Tomorrow, it'll be 6 degrees and it'll all be gone. Nice while it lasted though. 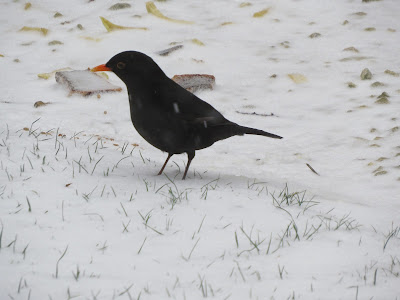 Posted by The Wessex Reiver at 17:57 No comments: