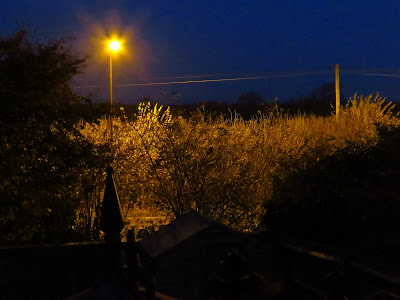 I opened the casement this morn at starlight,
And, the moment I got out of bed,
The daisies were quaking about in their white
And the cowslip was nodding its head.
The grass was all shivers, the stars were all bright,
And Robin that should come at e'en--
I thought that I saw him, a ghost by moonlight,
Like a stalking horse stand on the green.

So wrote the 'peasant' poet John Clare at the beginning of his poem I Dreamt of Robin.  Today nearly 200 years later, I too woke to the ghost of the robin, or at least a shadowy silhouette. I woke at 6am and already the mellifluous tones of robin redbreast were crowding the still air. I lay in bed, listening to that staccato call, repeated ad infinitum under a still dark sky. A perfect alarm call in anyone's book.

But of course the robin had absolutely no interest in me, my alarm call or the joy I had lying there listening. Simply he was there sending out a warning note to every other robin in the neighbourhood, 'get off my patch!'  In the book by the renowned ornithologist and wildlife journalist Dominic Couzens, Songs of Love and War: The Dark Heart of Bird Behaviour (pub. 2017) on page 21 is a sentence.

“The dawn chorus has begun with a lone voice and a whisper, but the first voice is like the first drop of rain in a shower.”


Often it is the robin which turns on the tap of the shower, especially in urban areas where the glow of streetlights disturbs natural biorhythms and can cause the robin we love to sing throughout the night.

Elsewhere in this book an entire chapter is devoted to the European Robin (Erithacus rubecula), which in 2015 became once more the clear favourite in a public poll to be awarded the title of Britain's National Bird, above other species in the frame, blackbird, the swift and the barn owl. So far, this has not been officially adopted, (I like the dipper being Norway's National bird) but it is not the first time that the robin had been put forward as our National bird. Way back during the second world war, one of our best ornithologists David Lack accidentally or not, enthroned the idea in his book The Life of the Robin (pub. 1943 but still in print).

Back when David Lack was eulogising over the robin, the species itself was classified as being a member of the thrush family. Indeed until recently in most references to our maybe one day National Bird, has it solidly hanging out with the thrush brigade. However the International Ornithological Congress (IOC) have a long term project to reorder, re classify, and in someone like me create confusion, all bird taxonomic data. As a result, the robin is now firmly in the Old World Flycatcher group of birds. Which makes sense as these chats, flycatchers and robins are insectivorous birds of similar appearance. And in the subfamily Erithacinae which robins now reside, we have chats, robin-chats, and even palm thrushes. Confused, I know I am.  But since January 1st this year, our own British Ornithologists' Union (BOU) has adopted the IOC's taxonomic classification and so sorry Mr Red Breast, you're a flycatcher now.

Not that I think this morning's songster is remotely interested in the IOC or the BOU. It was just singing. I got up and whilst still dark in an attempt to locate this musical marvel. Luckily I had the streetlights in the lane to guide me.  It is well know that street lights and floodlights can trigger singing in the middle of the night. Here in Somerset our lights are switched off at midnight, only to re-flood the countryside at 6am. Thus if a roosting robin is disturbed by the glare, more often than not they will  burst into song,  even in complete darkness. But with luck more than technique I found him, just beyond the garden boundary in the middle of a elder. Time then for a photo, or two. 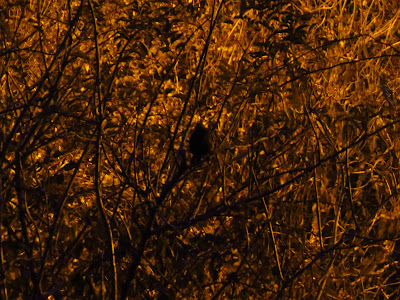 Robins are one of nature's success stories at the moment. As the landscape changes along with the climate, generalists like the robin will probably become more abundant as they adapt quickly to change. They can feed on a variety of food from seeds to insects and fruit, and are woodland edge and scrub occupiers. Evolutionary speaking they were one of the species which followed wild boar and other ground breaking animals through the woodlands, searching, in the wake of the 'plough', for tasty treats in the turned earth. It's why robins like gardens, a woodland edge in miniature, lots of disturbance and things to rifle through on the hunt for a worm. Yet despite being highly adaptable on average they only live for 2 or 3 years. Hard winters will knock the population back and there is a natural high mortality rate of the fledglings. Those high levels of mortality are counterbalanced by high productivity. That coupled with recent milder winters have seen the UK robin population rise by around 40% Which may, or of course may not, explain that the oldest known wild robin reached 11 years and 5 months of age. That's a lot of singing, and my robin is still singing as I write this at 9am.

Sometimes though the facts cloud the message. My robin today is singing to proclaim its right to this bit of the planet. That's all. My listening to it is a physical process, which triggers a human emotion; one of joy at being woken by those mellifluous staccato notes, from a shadowy silhouette in an elder tree. It was worth getting up for.
Posted by The Wessex Reiver at 08:55 4 comments: