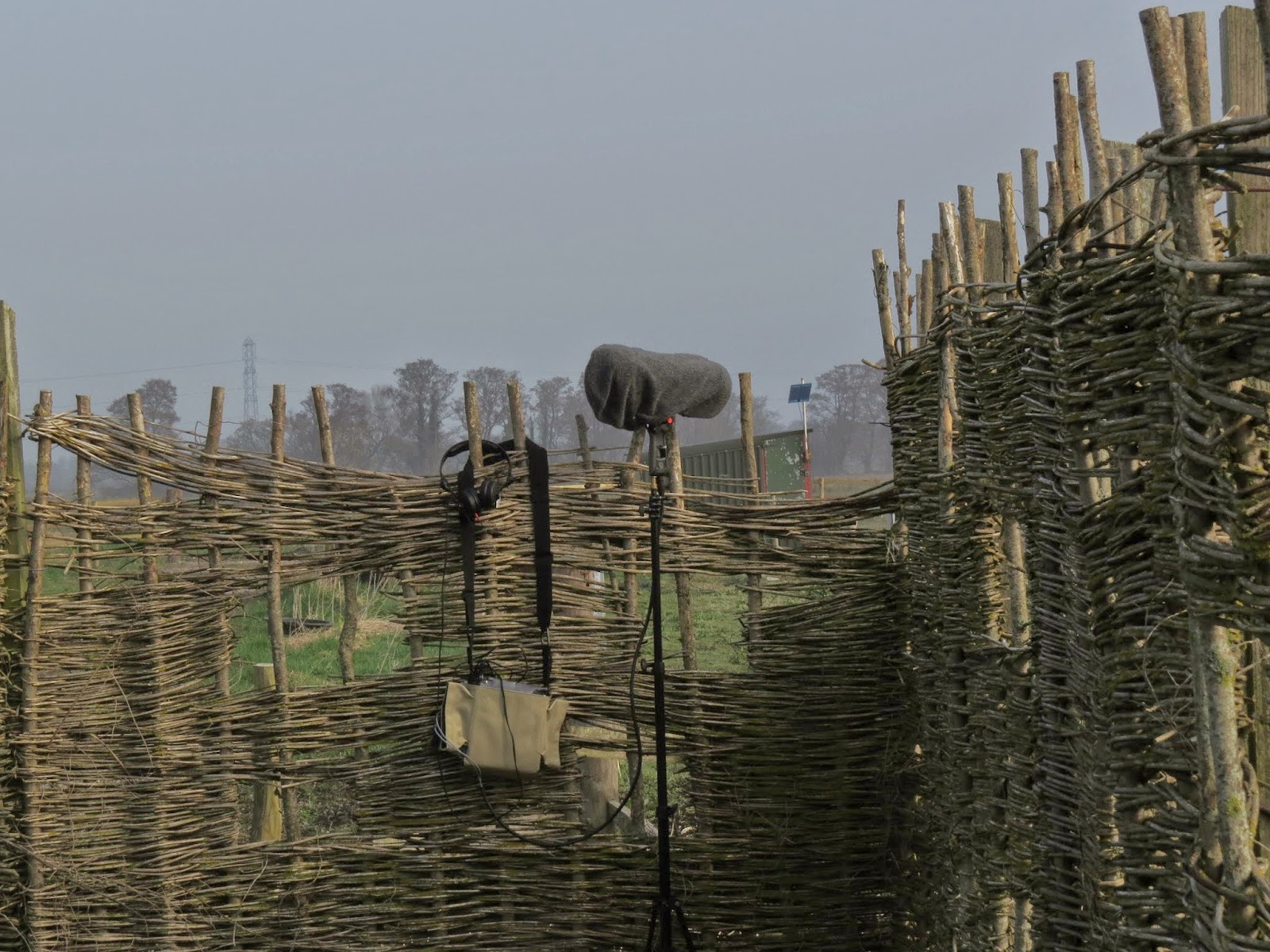 It wasn't until I'd been standing there for nearly an hour that I realised it was dark. And it had turned cold. March 20th 2015 as everyone knows, was a day of a solar eclipse. The first since the full solar eclipse in 1999. I remember that event well and having a day off  I ventured out early to the Somerset Levels in anticipation. I took with me a sound recording kit as astronomical events like this are often accompanied by odd behaviour in animals.
Today was no exception. I got into position about 8.45am and after firing up the recorder, I walked some little way off to watch the event from a distance. At 08.45 although the eclipse had begun the Somerset Levels were as one would expect. Weak sunshine lifting the overnight mist, foraging wigeon whistling like asthmatic sheep on the wet reserve. Nothing unusual, but then I noticed. As if an unseen switch had been pulled just before 9am I noticed the light levels drop dramatically. I realised the wigeon, pintail, shoveler and other birds on the reserve had stopped foraging, stopped calling and returned to roost positions, heads tucked under wings. The reserve had fallen silent and what activity there was mostly involved small flotilla of wigeon drifting slowly across the water,  asleep.
﻿
It had gone silent save for a lone male reed bunting which took up position by the microphone to sing. And sing he did all through the time of the eclipse. The only real birdsong for nearly 20 minutes.  By 9.15am it was noticeably darker. A strange yellow light crossed the landscape. Oblique light but not as one would see say at dusk, when it had a reddish hue. This light was more Naples Yellow, strong but not overly so. I'd not seen that before and it fascinated me. Reeds and a passing great white egret were bathed in an aura of deep yellow, set against a dull darkened landscape.
The light wasn't the only thing I'd noticed. I say noticed but it suddenly hit me how cold I was. I'd arrived to a glorious spring morning, early mist was rapidly lifting, strong sunshine in a blue sky greeted me as I drove across the Levels to my destination.  So engrossed in the event, I hadn't noticed that around 9.15 am, close to the eclipse maxima time, I started to feel cold and uncomfortable; that cold feeling at dusk when the chill of a frosty night to come eats into your bones. The light had dropped but the temperature had dropped considerably too, my guess is 4 or 5 degrees back to pre dawn levels. The mist was rolling back across the Levels too, the landscape was returning to evening. Such a spiritual experience and it fascinated me. Something I have never witnessed before. And then the dogs barked.
Half a mile or so away was a farmhouse. Not long before the eclipse maxima two dogs began barking continuously. I became angry at first. My attempts to record the changing soundscape during an eclipse were being hampered by barking dogs. Inwardly I barked back - SHUT UP!!! Then it struck me. They were possibly barking because of the eclipse. I can only guess this was the reason, but they barked continuously for 5 minutes, until that is, the sun began to re-emerge and then they stopped as suddenly as they'd started. I'd read that domestic animals can act strangely when an eclipse is in full swing. Had I witnessed this today? I think so, as in the whole 90 minutes on the Levels those two dogs only barked for 5 minutes around the 9.30am maxima.
It was coming to an end, seemingly quicker than it arrived. The sun returned, sunlight streaked across the landscape, mist rolled back, blue skies returned and all in less than 15 minutes. As I stood watching this change I could hear cracks, cracks from the wood of the bird hide beside me expanding. It really had become a lot colder for a few minutes then. Then the wigeon woke up, began moving around more purposefully and calling. Soon the reserve was alive with birdsong, not just the wigeon, wren, dunnock, geese, mallard and numerous tits. It had been quiet after all.... a silent spring day!
By 10am when I'd switched off the sound recording equipment a warm spring day filled the landscape. Hard to believe less than half an hour earlier I'd been engrossed by a deeply moving, spiritual and fascinating event. I'm not that interested in the science behind an eclipse, but I am fascinated in the effect it has on every living thing that witnesses it. Including me. No wonder Ancient cultures worshiped these celestial events, they are truly breath-taking.
As a postscript to this as I packed up the local farmer, Colin drove into the carpark to check the water levels over his land. Leaning against his pick up truck, two portly gentleman in checked shirts and green coats chatted in the warm sunshine for an hour on all things wildlife and farming. Mid conversation about the Dexta tractor and a pied wagtail nest, I heard a chittering high up.
"Colin house martins!".
We peered into the sky. There, 6 black dots, white underbellies, way up high buzzing like flies against the blue sky. The first I've seen this spring.
"Bugger oi theys early and no mistake" exclaimed Colin "ahh blooming lovely,  my swallows will be back afore long, I has 17 nests you know in they stables, knows them all by name, I loves them swooping in and out ". 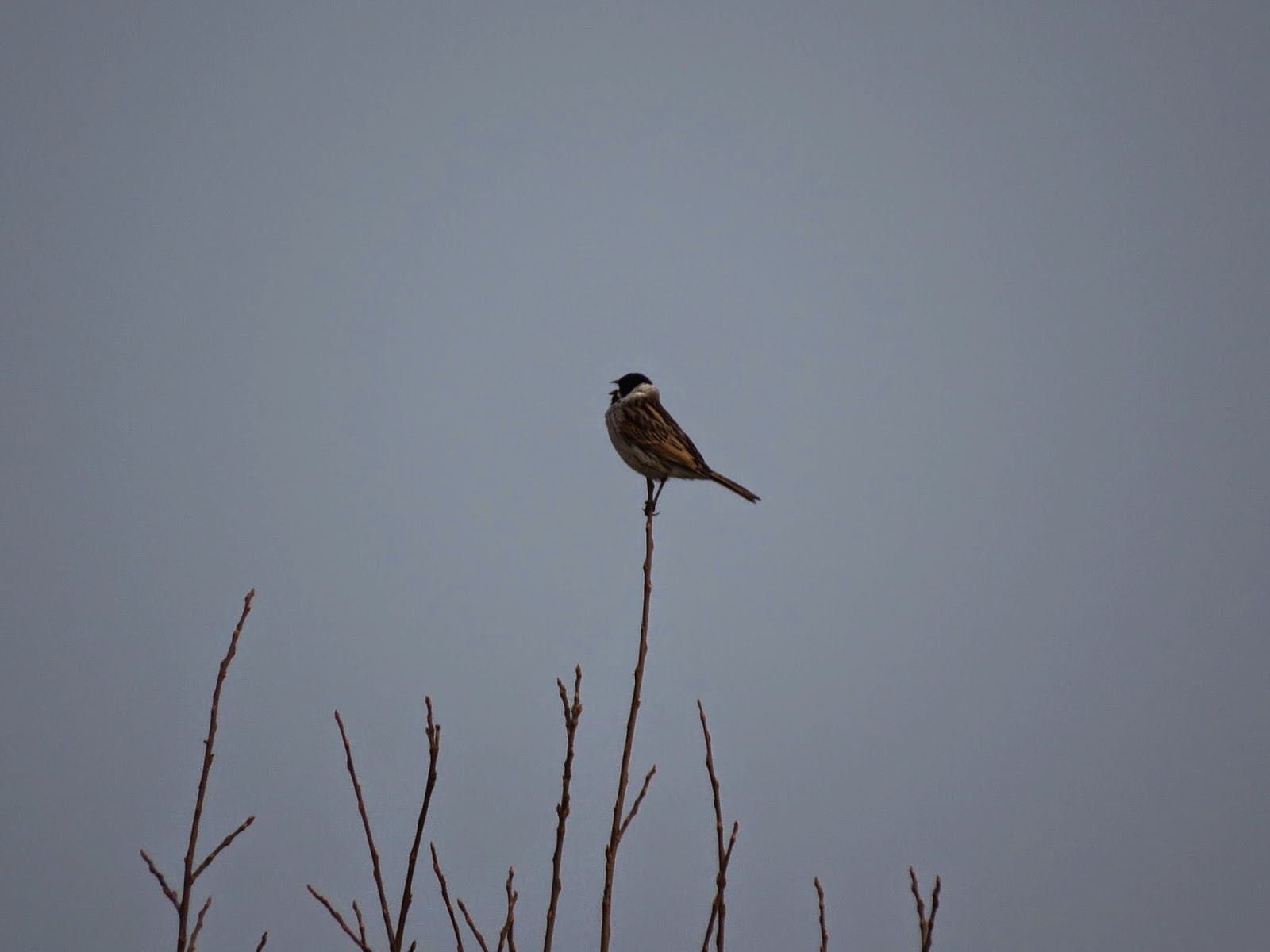 Lone voice in the landscape - the reed bunting 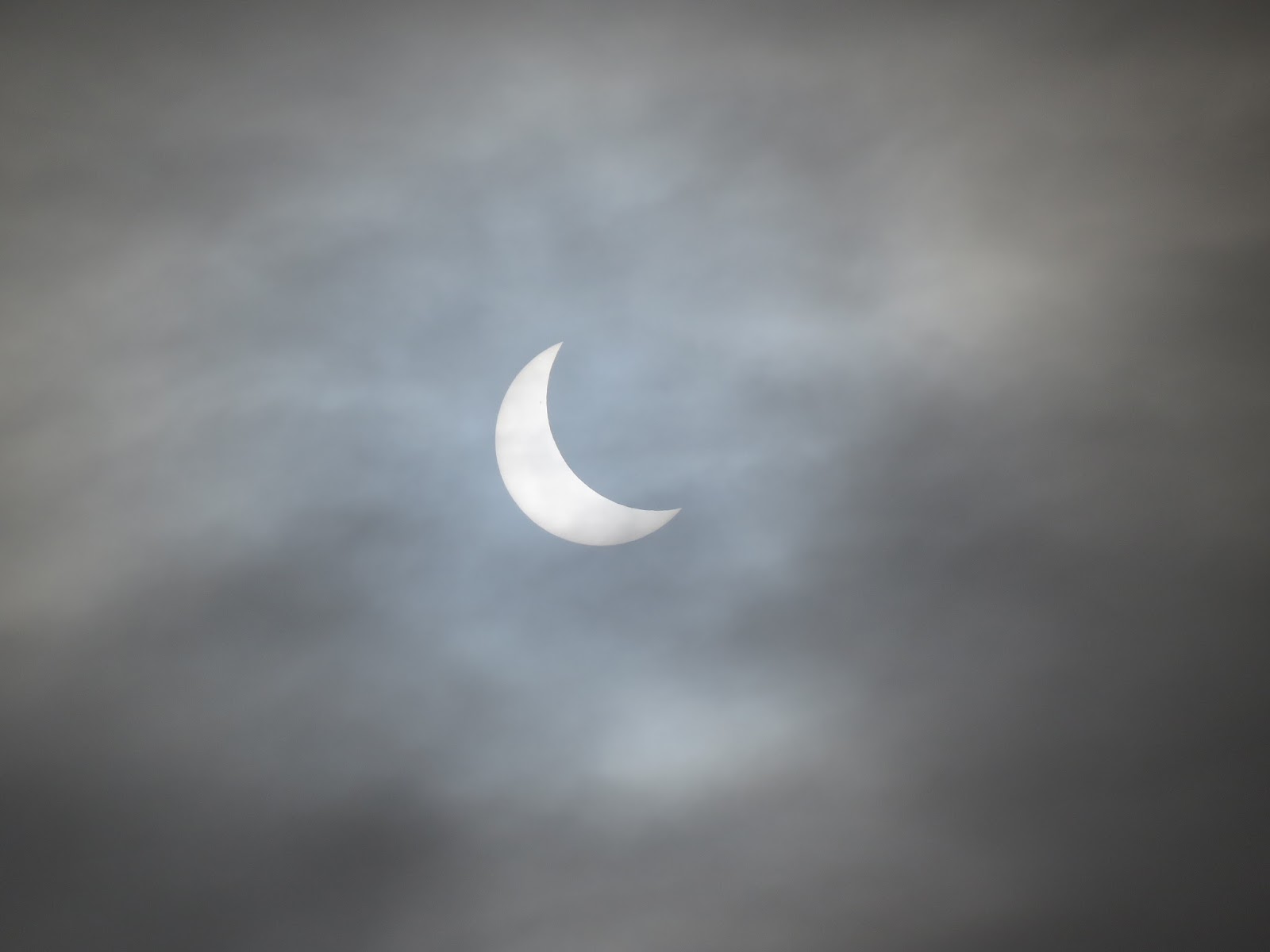 By 9am the eclipse was visible 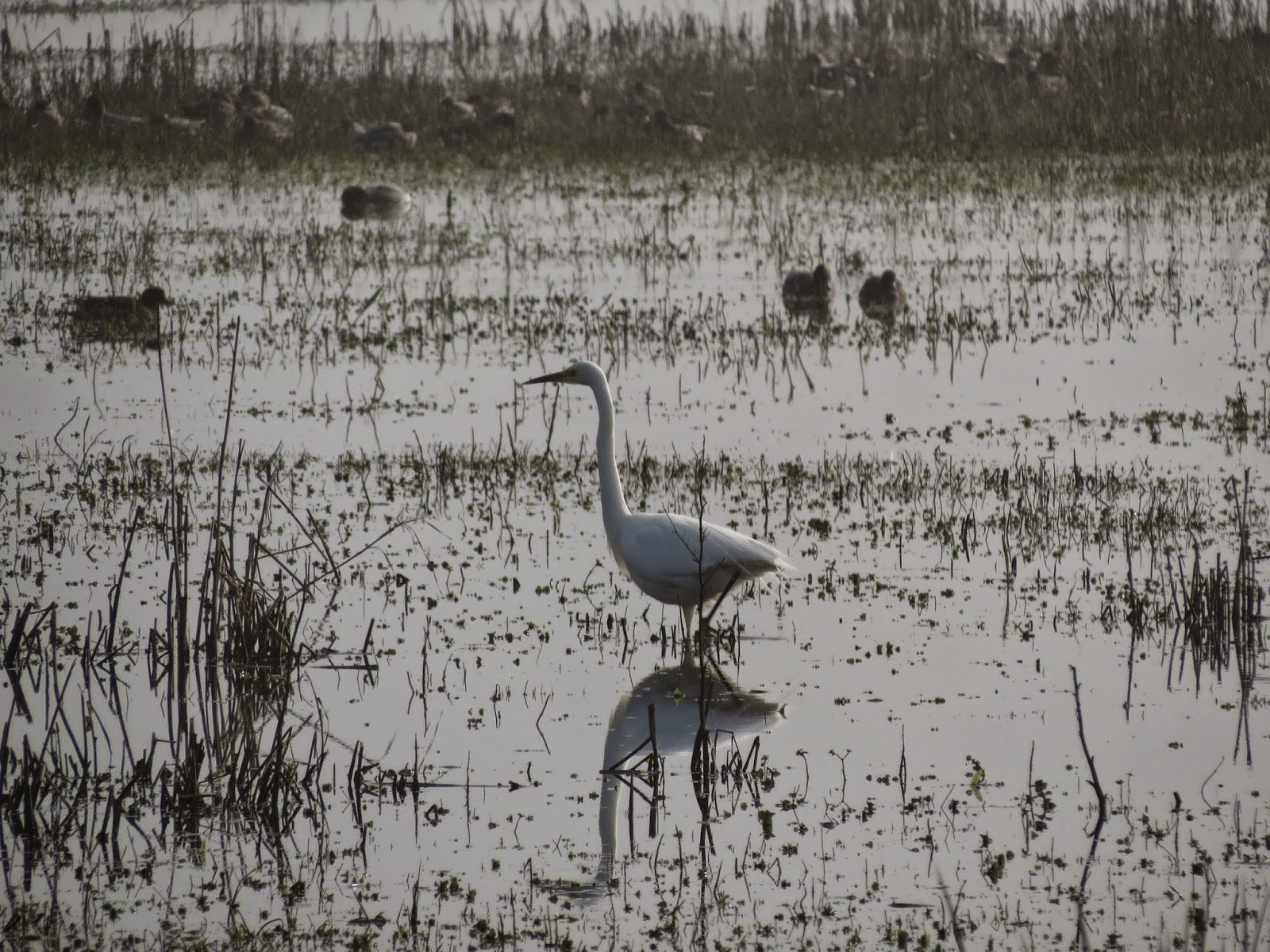 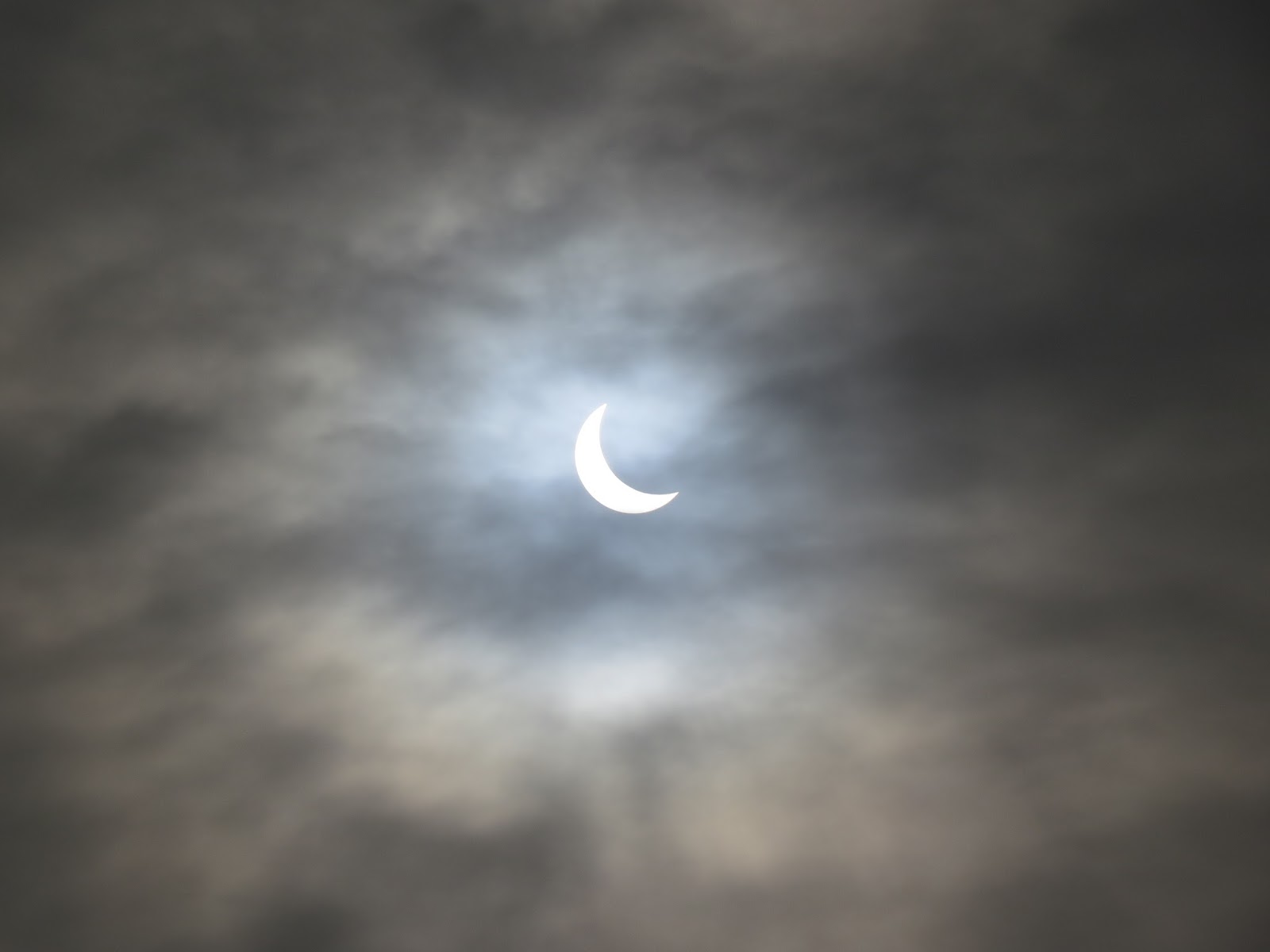 9.10 am and the eclipse gathered pace 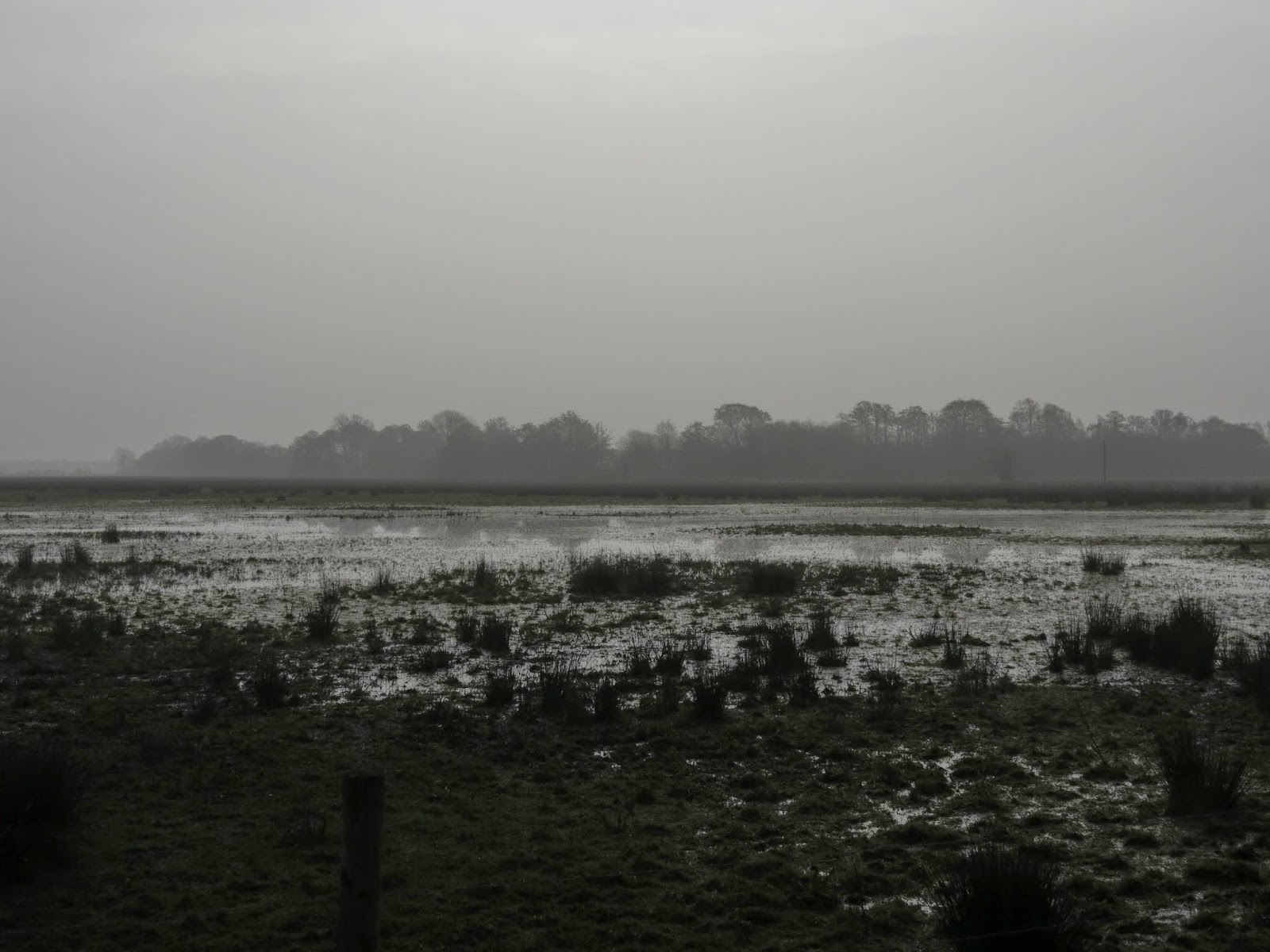 Catcott Levels at 9.30am around the time of the full eclipse. 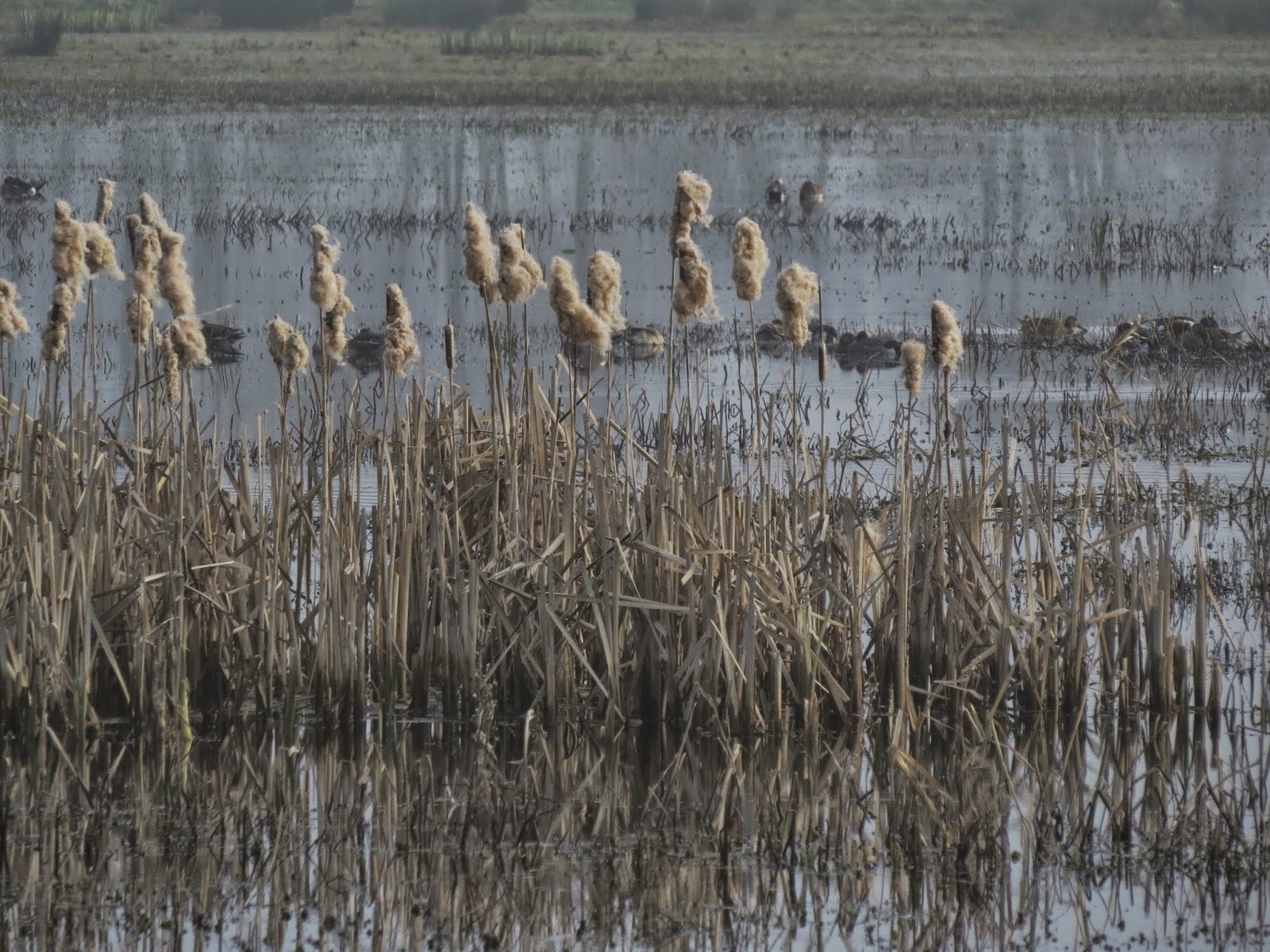 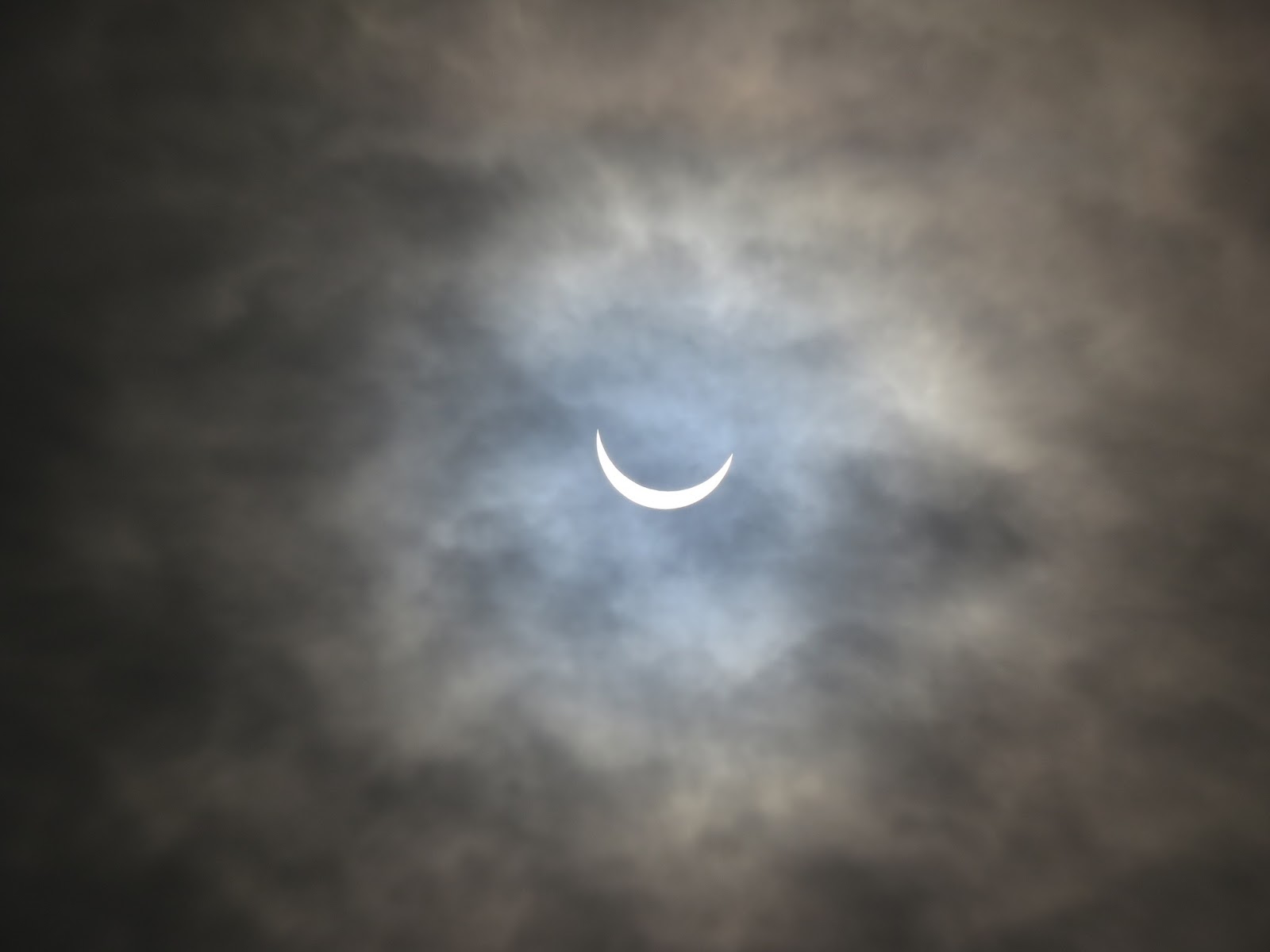 The eclipse reaching its Maxima in Somerset 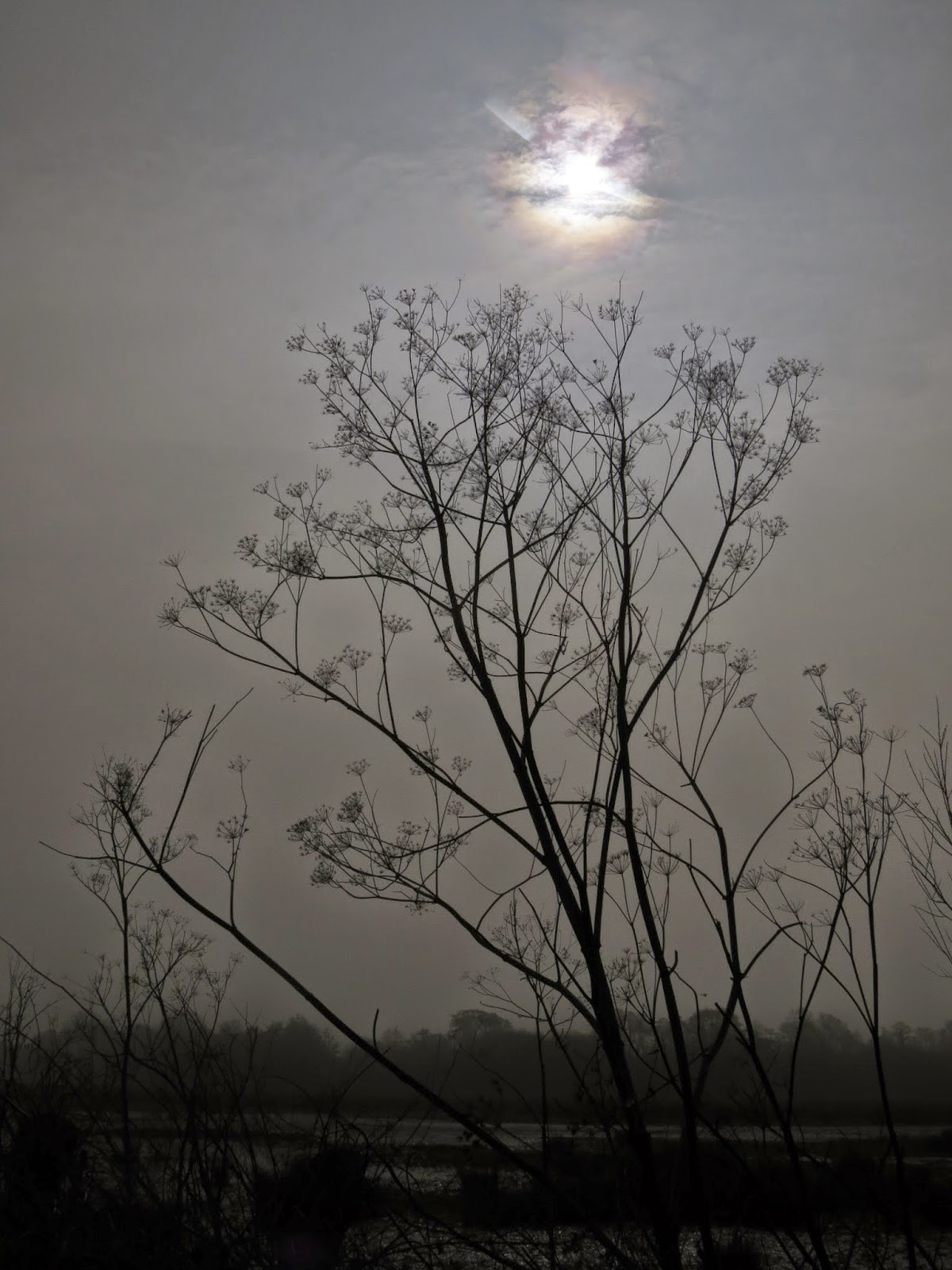 An artistic view of the eclipse.... followed by the obligatory selfie...... I was there! 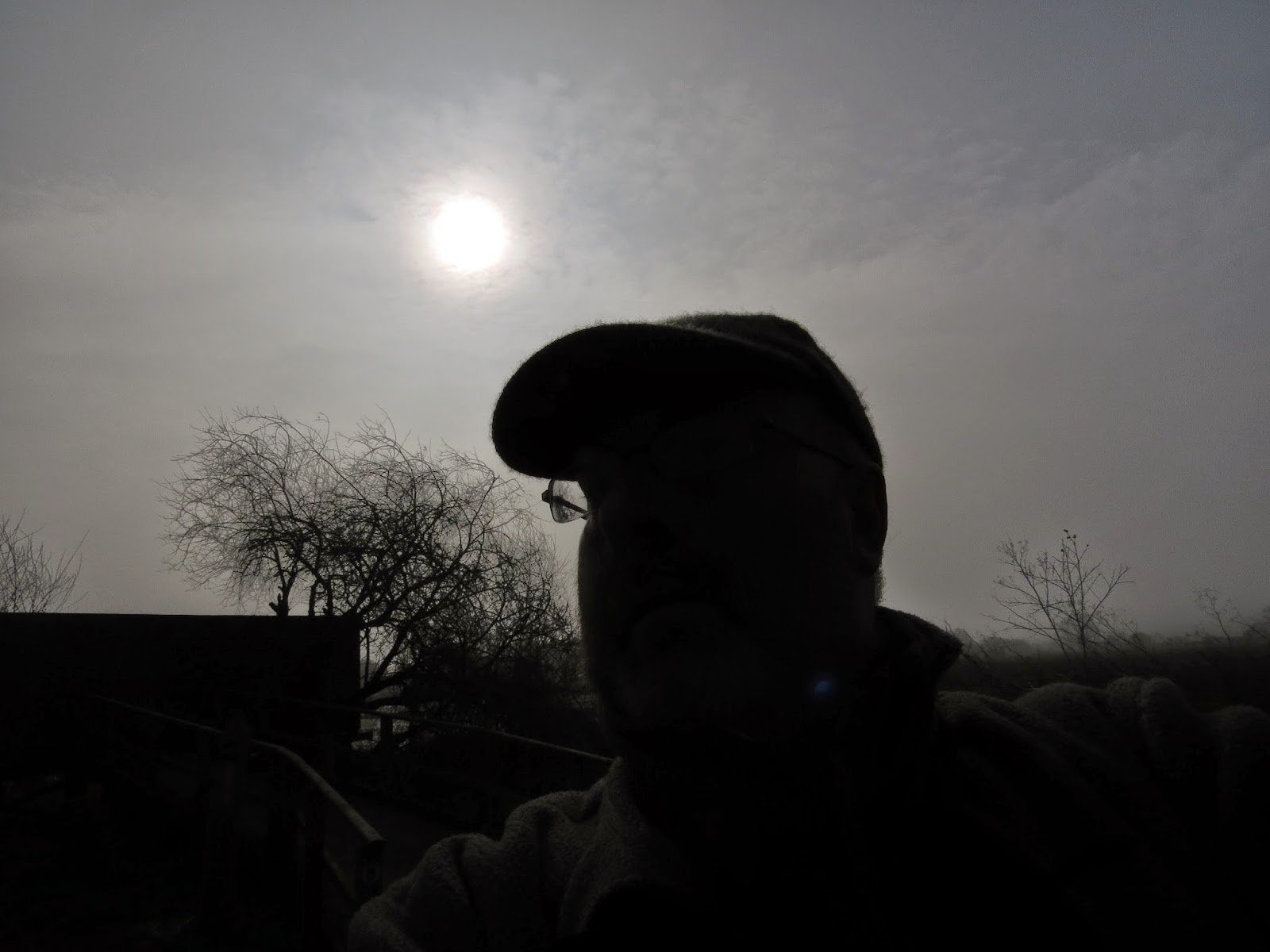 I actually wrote this blog posting longhand into my notebook whilst sitting in the village church (mid ground - image 1). At that point in the morning it was around 11.30am and being about half way through taking the 17 images, I'd popped in to the church to take part in their 'sanctuary' Saturdays, held on the first Saturday of every month. Apt really because as this little project of mine also takes place on the first weekend of the month, the 'sanctuary' event reminds me to do it.
Taking the images today really was a pleasure. The first two forays into reproducing the seasons in images were at best a trial. January was just wet and cold, February bitterly cold and miserable. Today, spring finally woke up and began to release winters grip. There is always a day in the first week of March when the sun shines, but more than that. On that day for the first time since mid-winter that sun beats down on a stirring landscape. Something has changed ever from a day or two before. The incessant mud is finally trying, dark brooding earth is giving way to pale soil. The sky is  a brighter shade of blue, the sun has warmth and there is well just a different feel about the countryside.
Today was that day for 2015. As the images which follow show, there was almost unbroken blue sky from horizon to horizon. Ostensibly the images, apart from being sunny, don't reveal too much of difference to January or February. But the differences were there for me to see today. As I sat in the church writing in silence, outside birdsong. Lots of birdsong. Chaffinch, great tit, blackbird, rook and jackdaw were prevalent. Later in the day I heard my first skylark of the year. Plus, the sunlight which streamed into the nave was brighter today.
I watched a shaft of sunlight move over the floor from one pew to another and in doing so it cast the first pew into shade in not much longer than 5 minutes. As I watched I could see the shadow millimetre by millimetre advancing over the floor left to right. A reminder of the reason for this project. Outwardly everything is the same yet nothing ever stays the same, not even for a moment.
Today's thought provoking text for the sanctuary had a specific resonance on this glorious spring day. It came from Matthew 13 : 31-33. In summary, sow a mustard seed it will grow and birds will sit in the mustard tree and from that we will obtain mustard and pleasure. In other we reap what we sow and nurture; work hard but remember that life is about taking time out and relaxing, especially by listening to the patterns of the seasons, to nature and to the rhythms of life. As humans we are designed to work a little, play a little but above all stop and let our spirit become attuned to the seasonal changes. That's healthy. And I agree. I'm not a religious person but these Saturday sanctuary mornings are becoming a must attend part of my life, a reason to enter a cool building (have a cup of tea) and just listen to silence; or the birdsong without. As the passing shadow pointed out, nothing stays the same and time is always moving, moving forward, eventually it will run out in more ways than one.
To the project then, a photo record of the changing seasons in this tiny part of North Somerset. What these don't show are the other aspects of the day. As the temperature rose to 16 degrees, from a cool 10, brimstone butterflies were on the wing, as were many bumblebees. Rooks were noisily defending their newly constructed nests. everywhere the sound of birdsong, and in many cases, the first lawn mow cut of the year. The countryside is just beginning to green up. Bud burst is still relatively uncommon, but daffodils and spring bulbs are bursting forth. In the hedgerows arum and umbellifer are beginning to grow. It will be a few weeks yet before the trees and hedges look green, but every day now a new aspect of the wakening countryside can be observed. 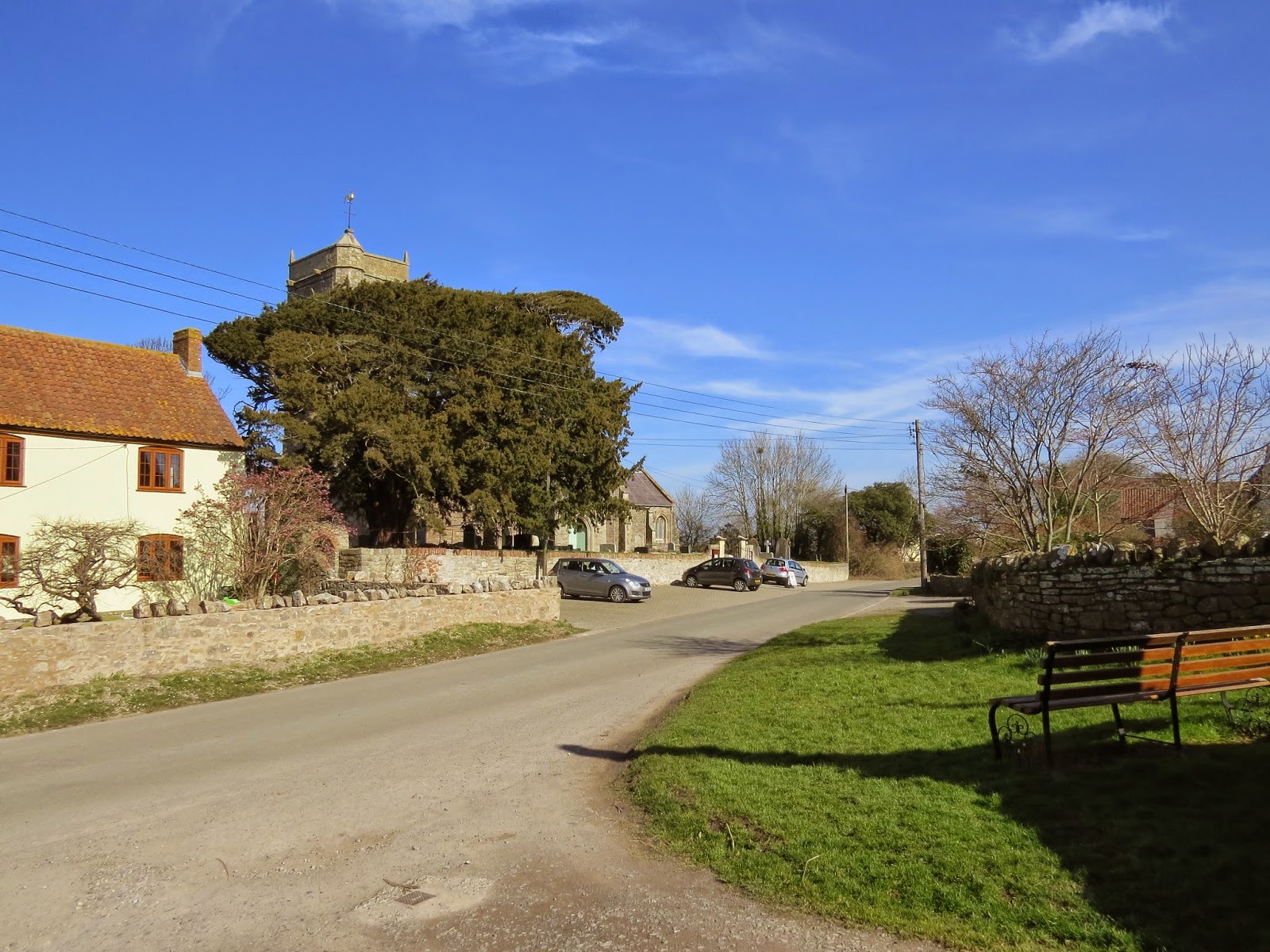 Image 1 : This looks the same yet changes afoot. The evergreen shrub on the right has gone and the wall around the house on the left was rebuilt this week and now has capstones. Plus a sneaky peek beyond the seat, a daffodil or two is in flower. 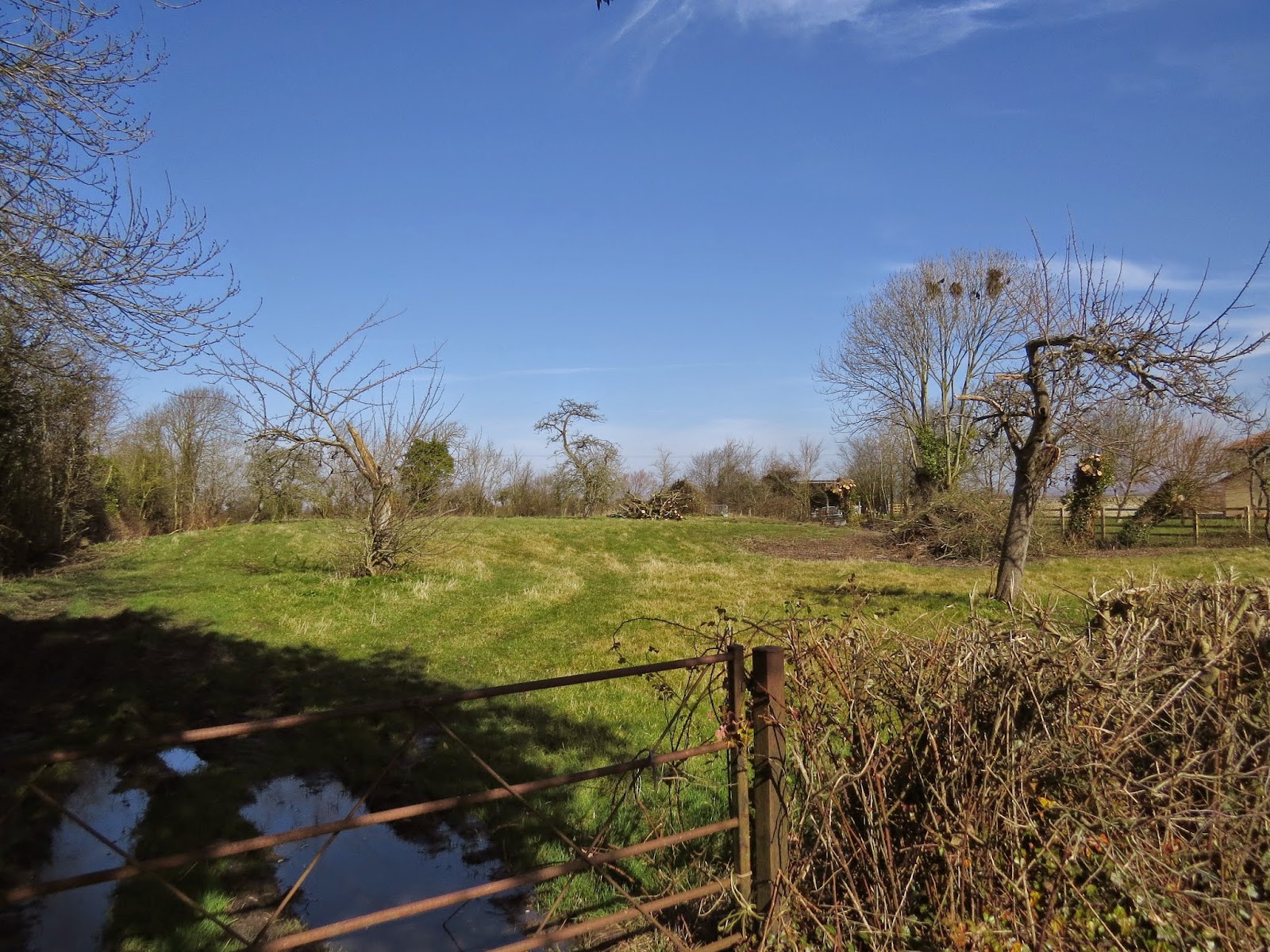 Image 2 : The main change here is the five rooks nests in the tree to the right. Ten days ago these didn't exist. Behind where I'm standing to take the image is a huge rookery, these are outspill rooks. 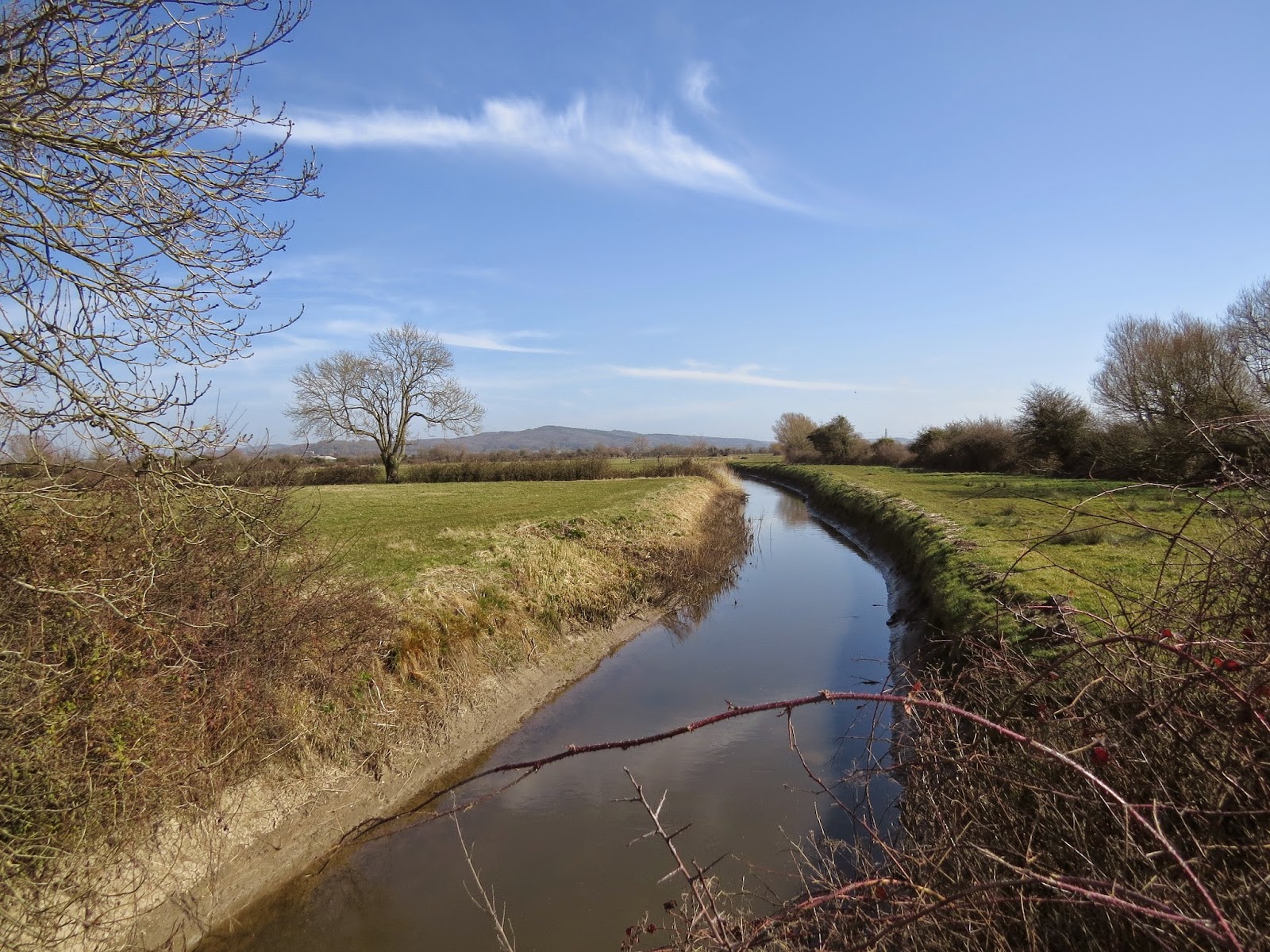 Image 3 : It was here I saw the first brimstone of the day just seconds before this image was captured. 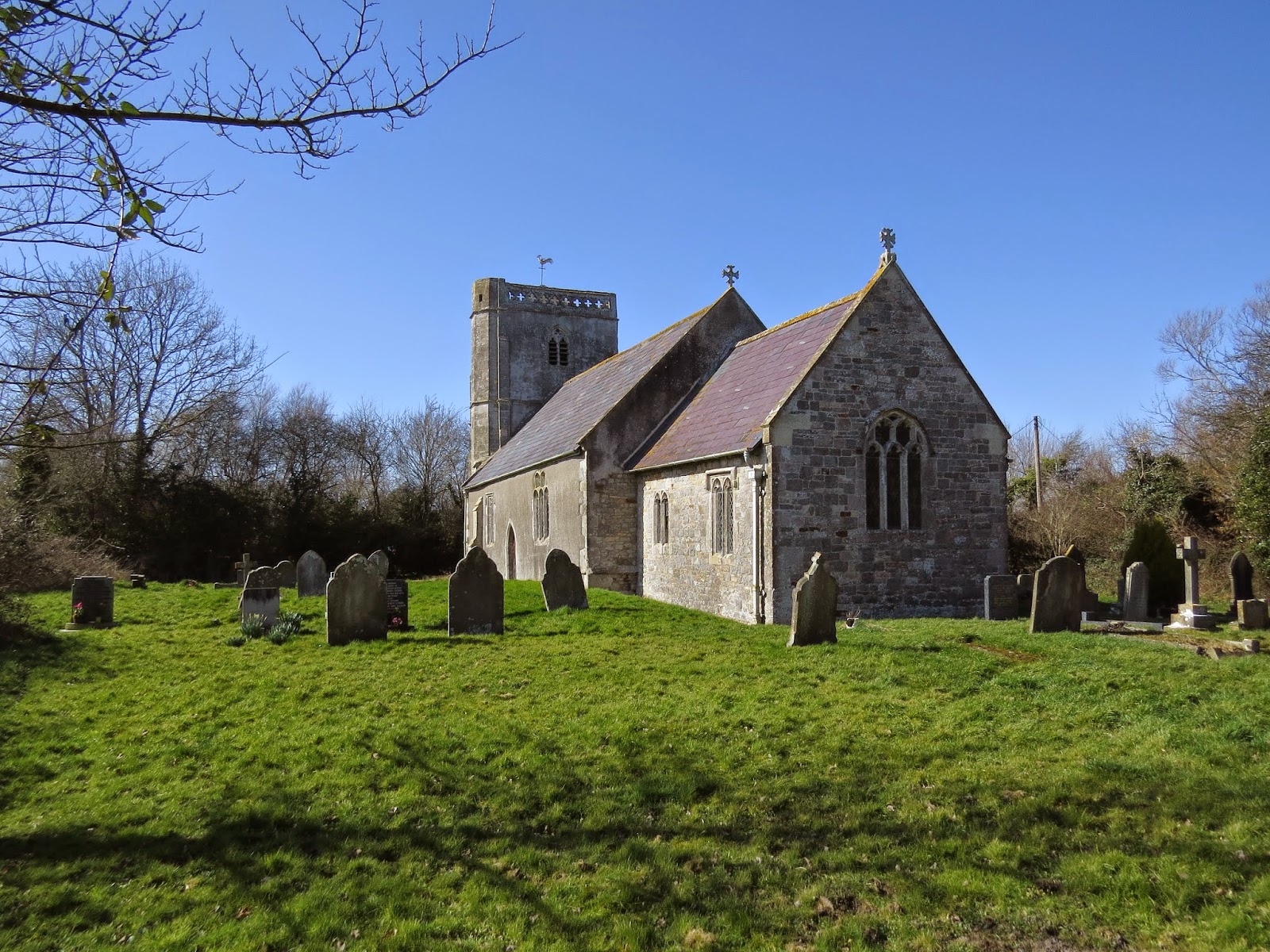 Image 4 : The churchyard was ablaze with daffodils, sadly my chosen location wasn't. 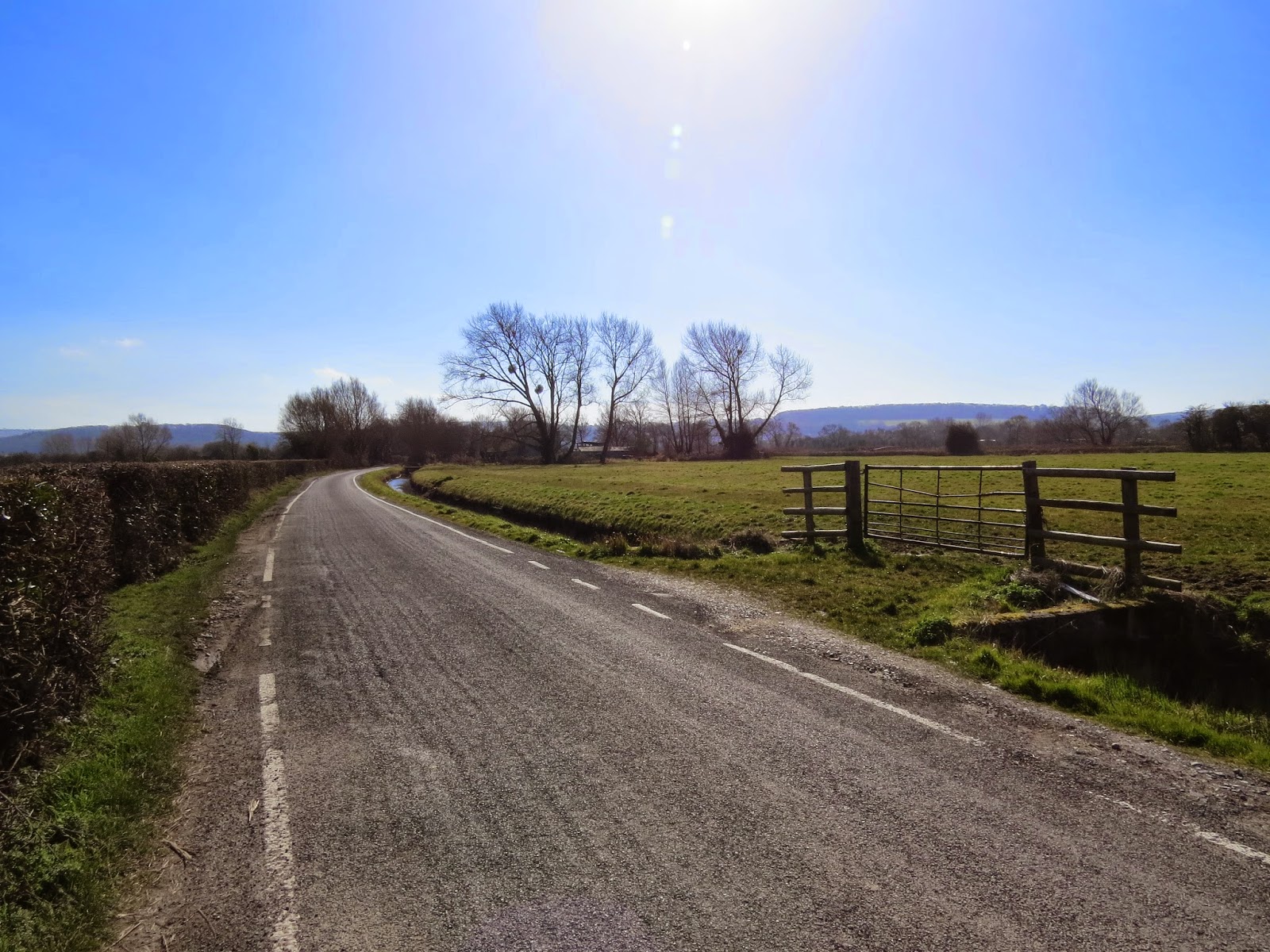 Image 5 : Lane to Banwell, where I heard my skylarks. 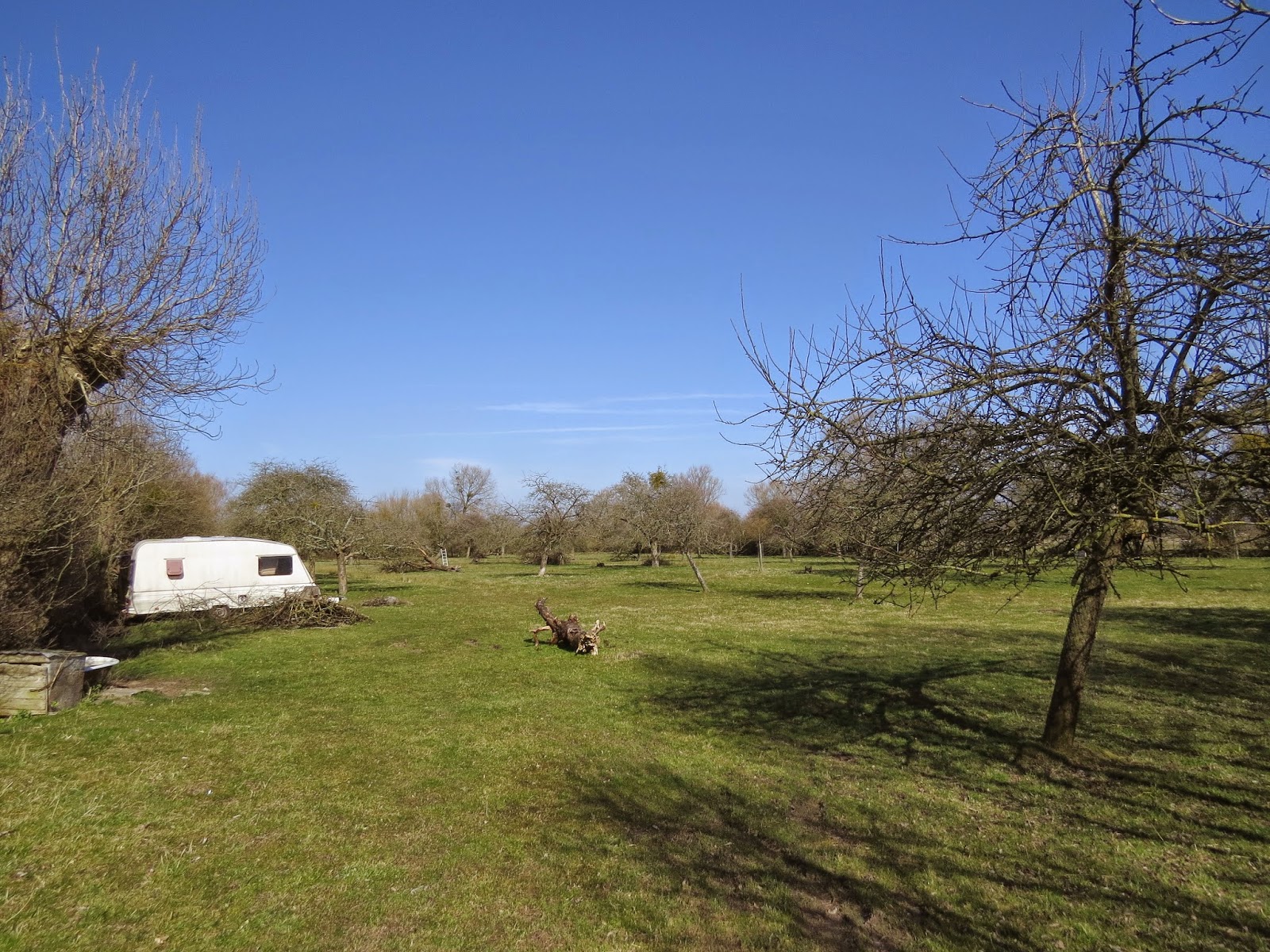 Image 6 : Still all quiet in the orchard, 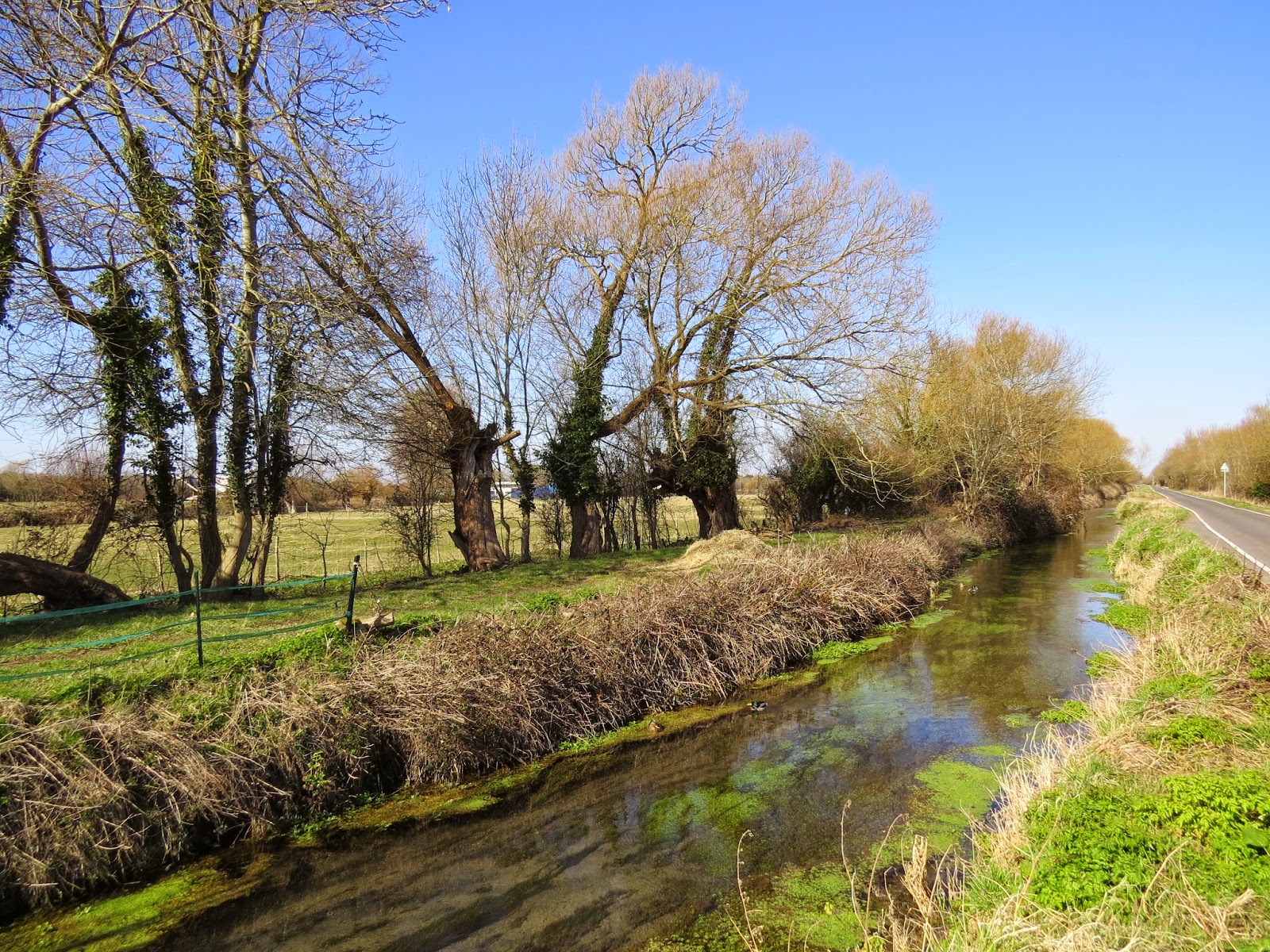 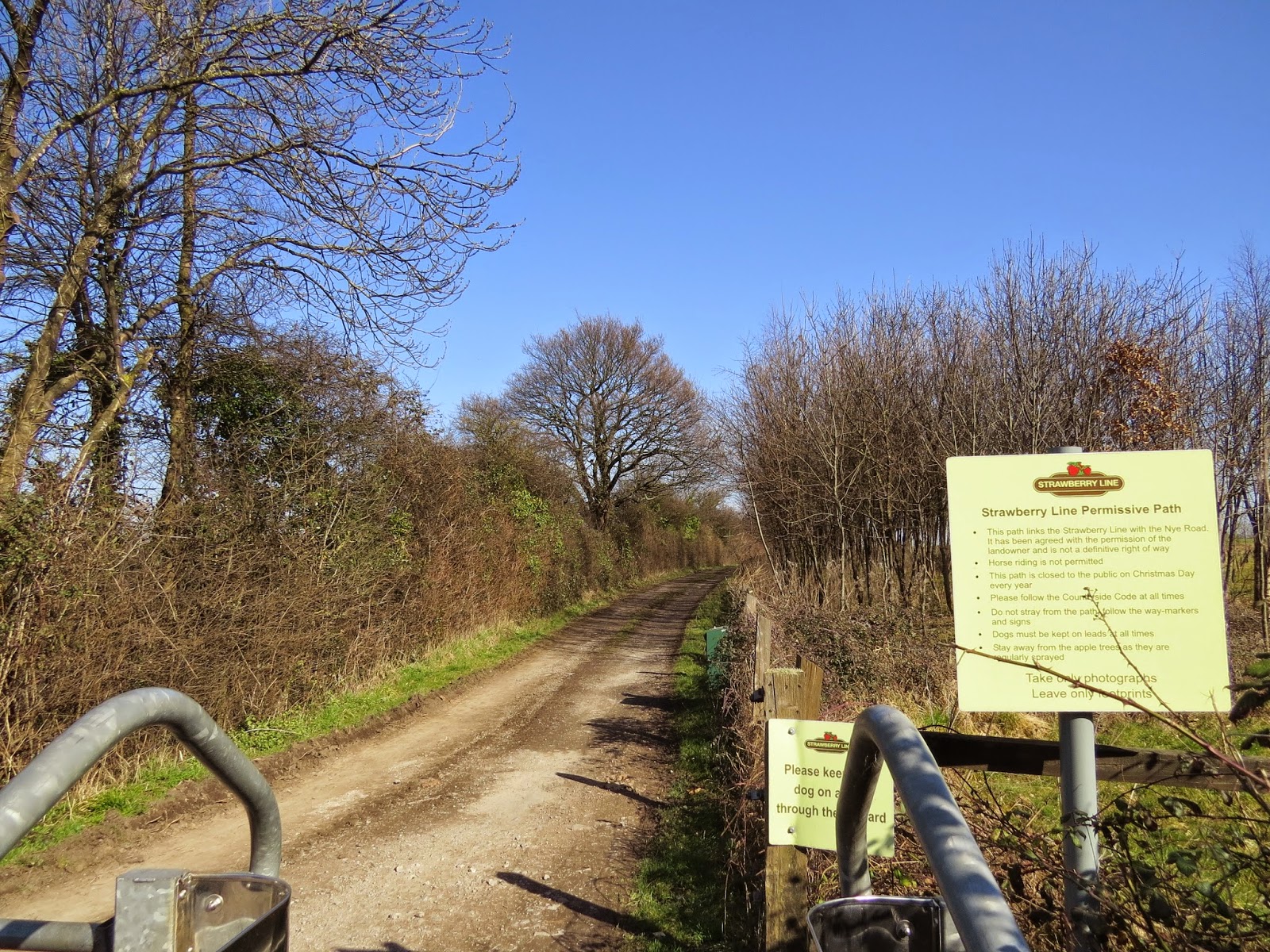 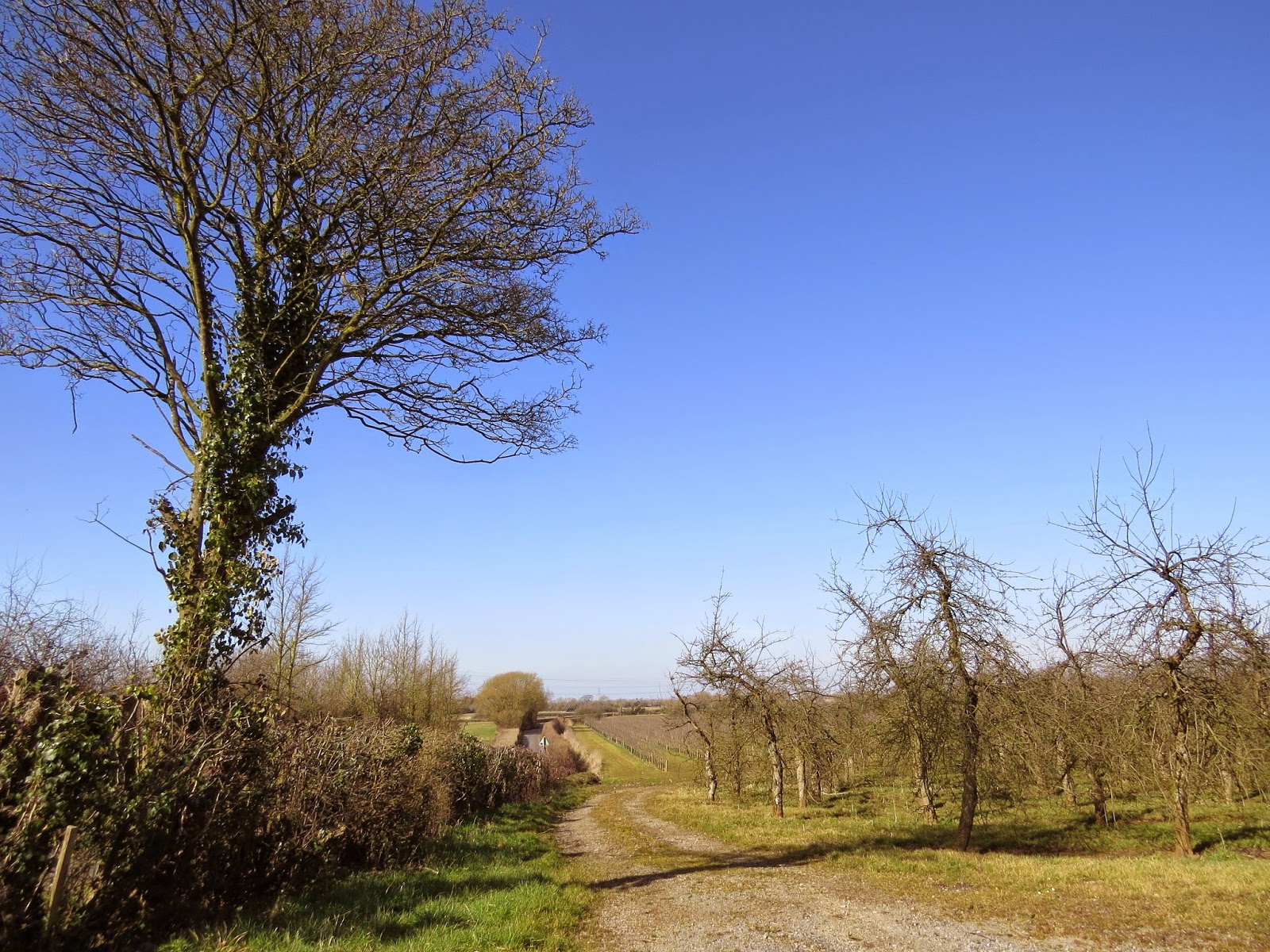 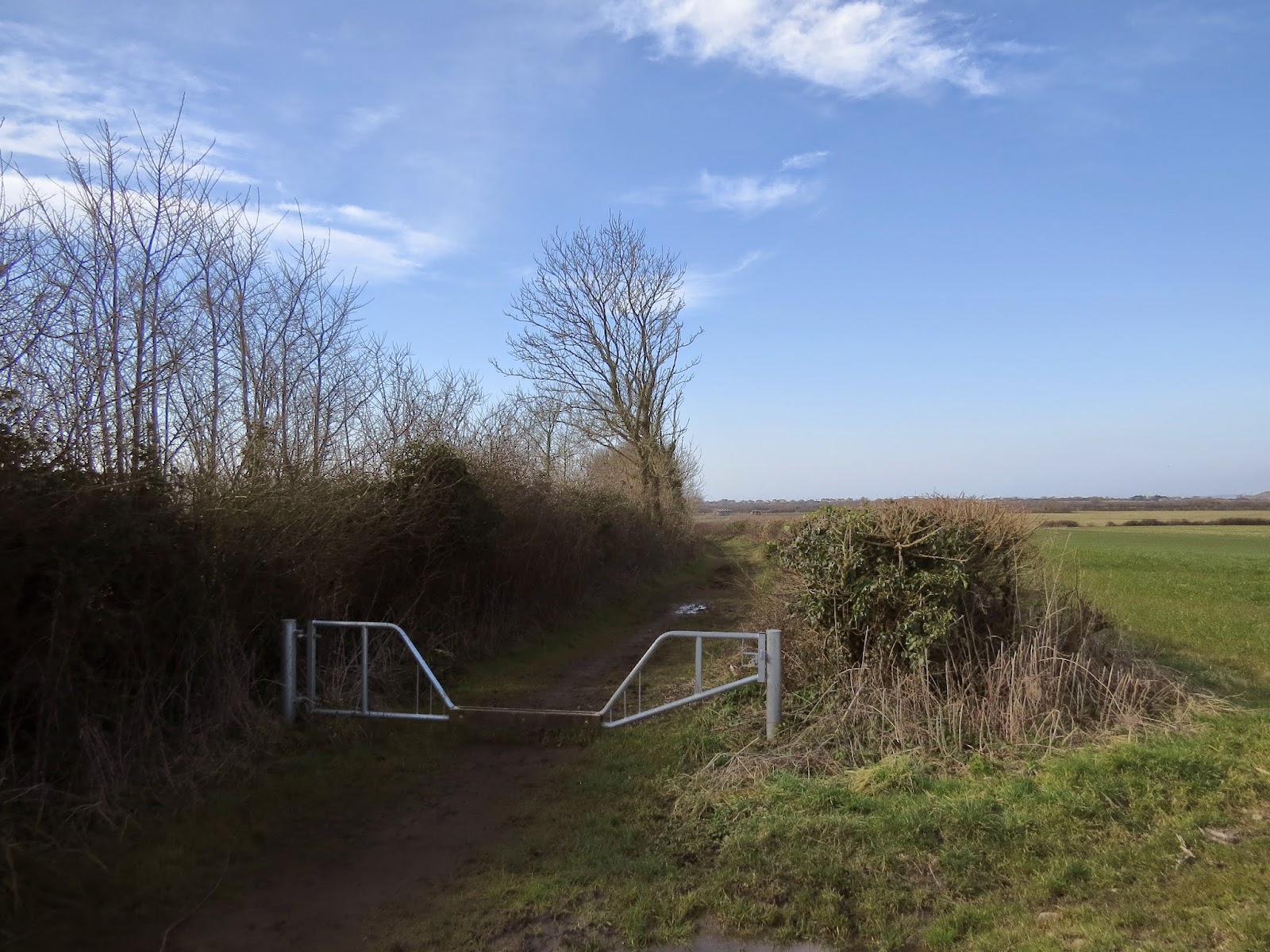 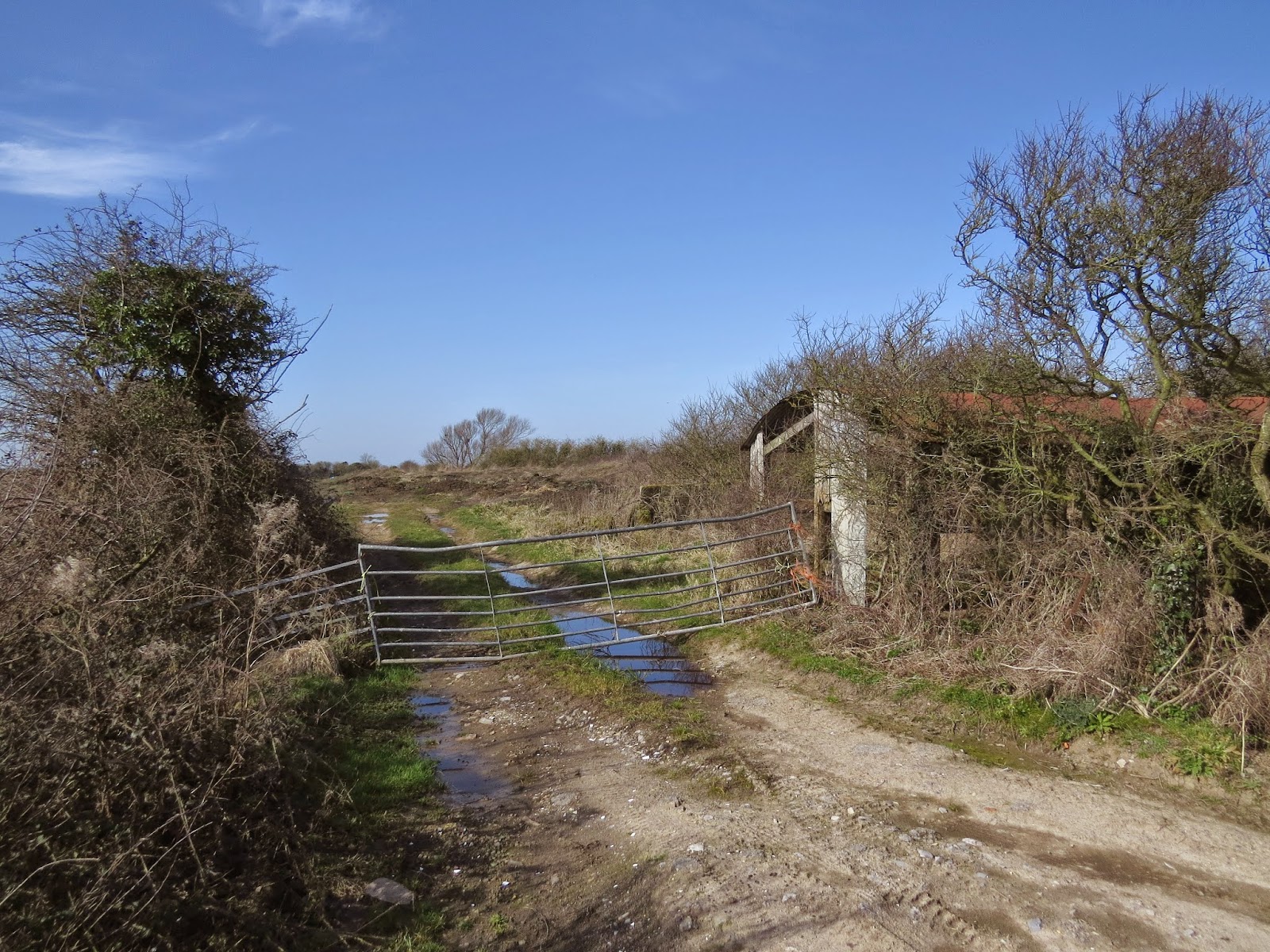 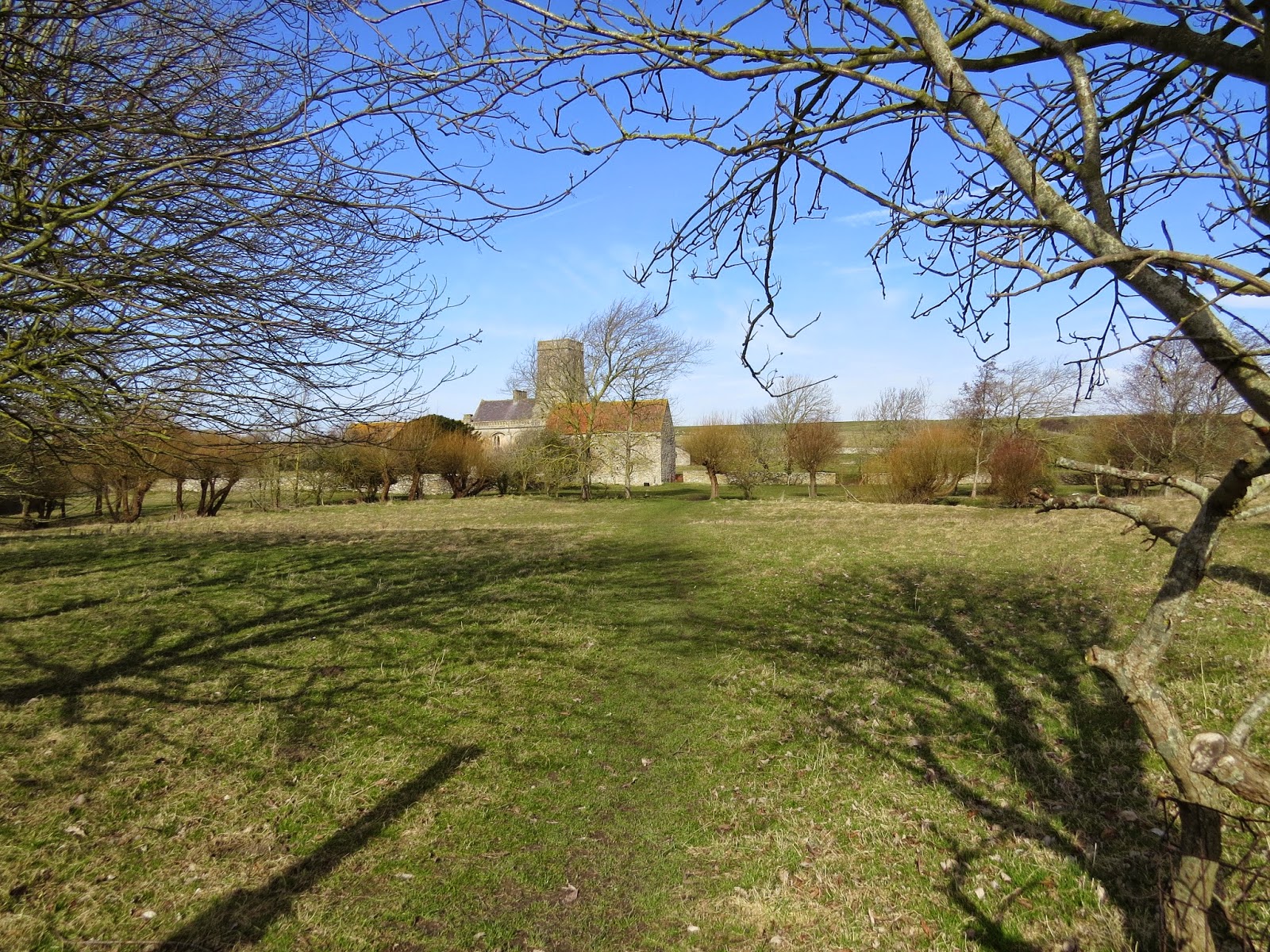 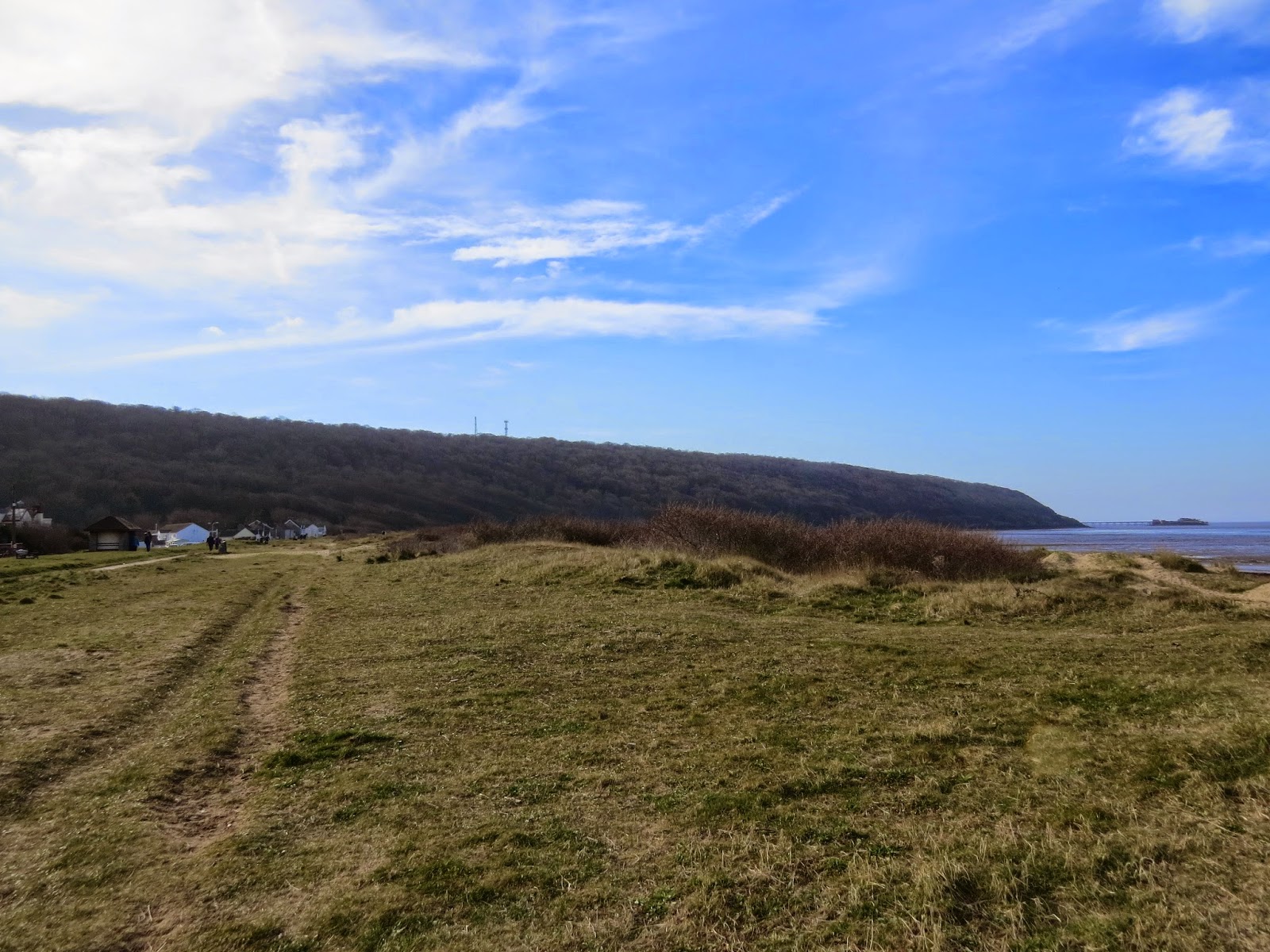 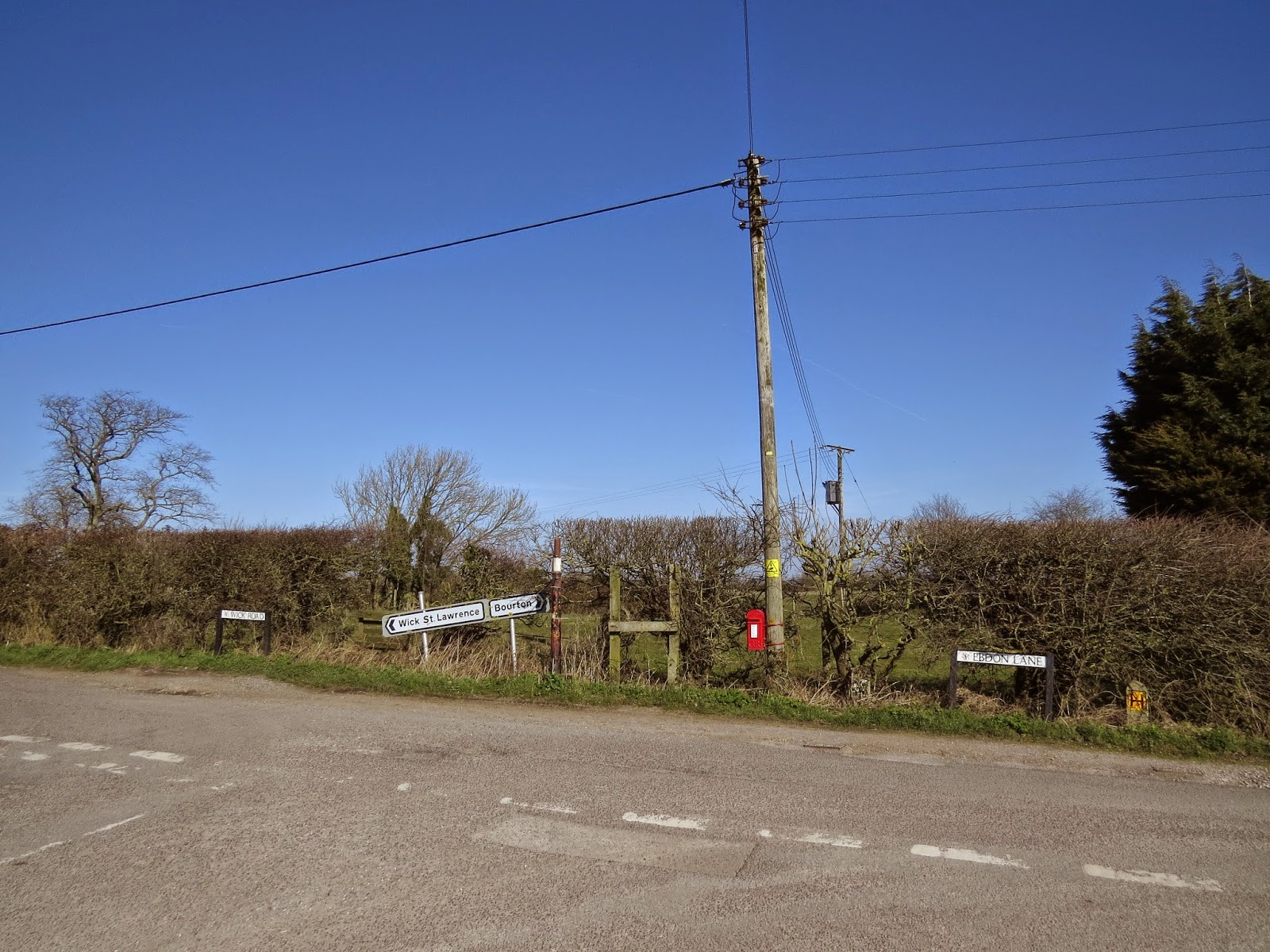 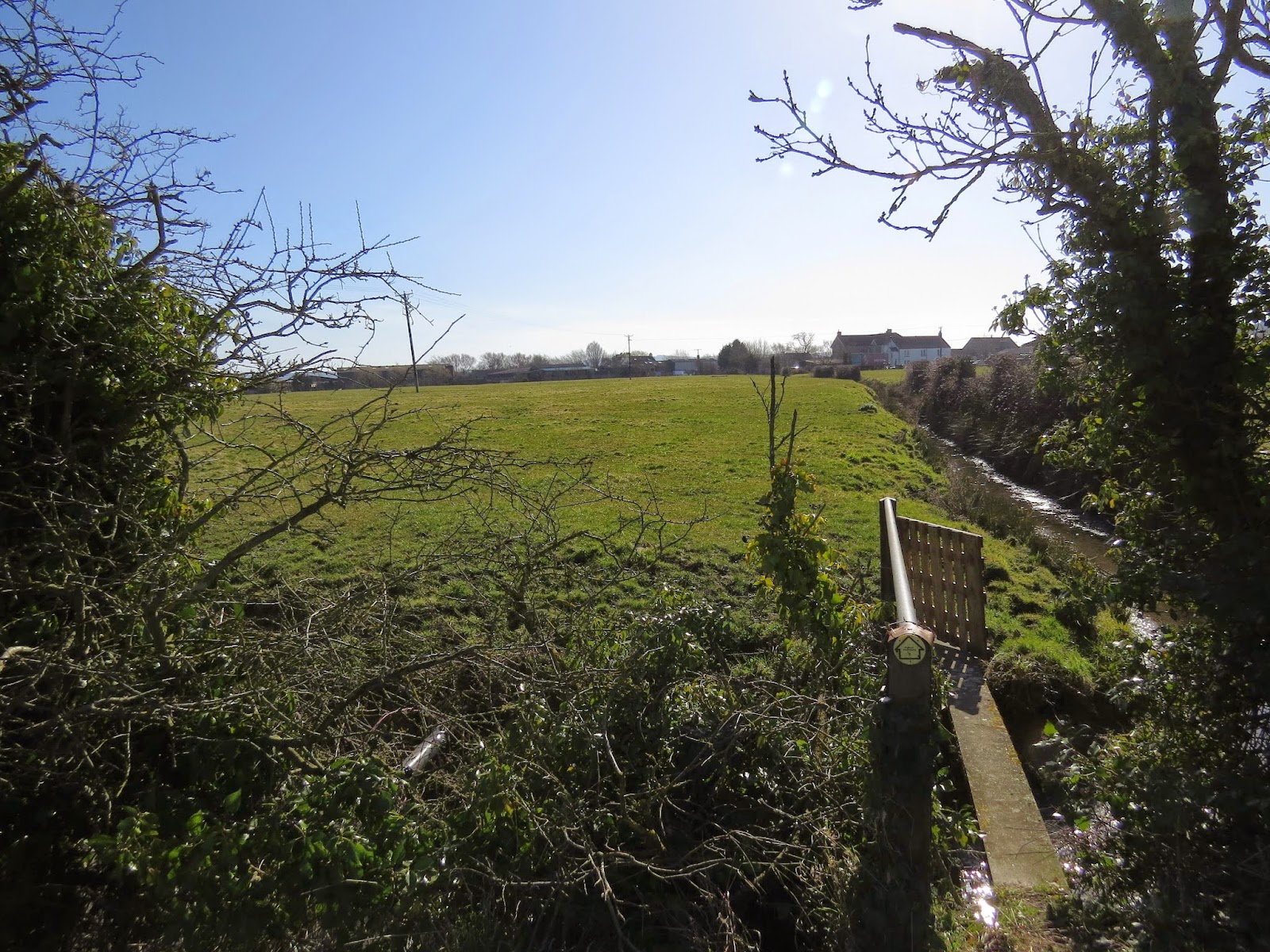 Image 15 : The footpath now has a wooden gate tied on with bailer string. 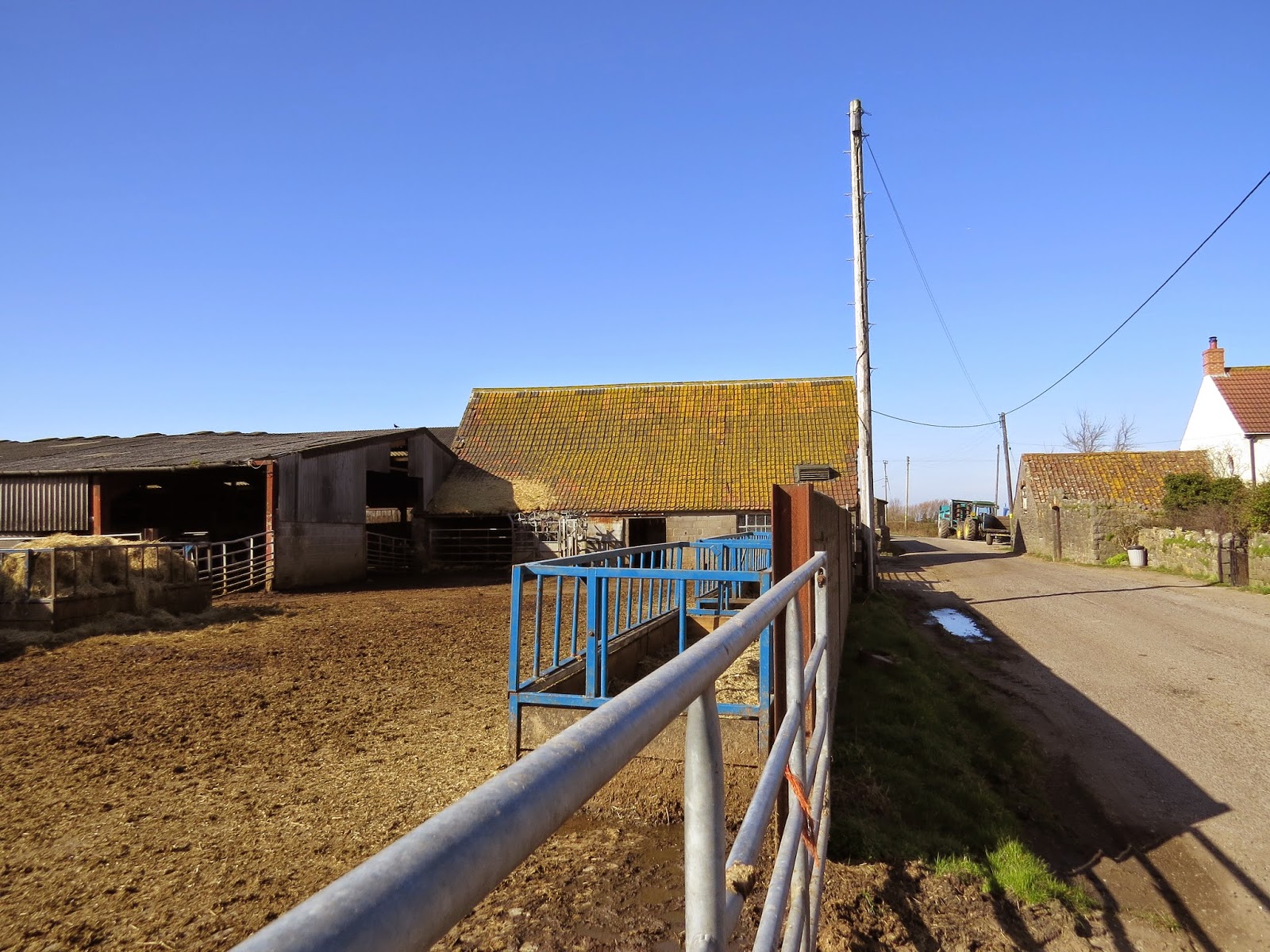 Image 16 : Green's Farm, just visible in the distance a Leyland 270 tractor which passed by just before I was in position for the image. 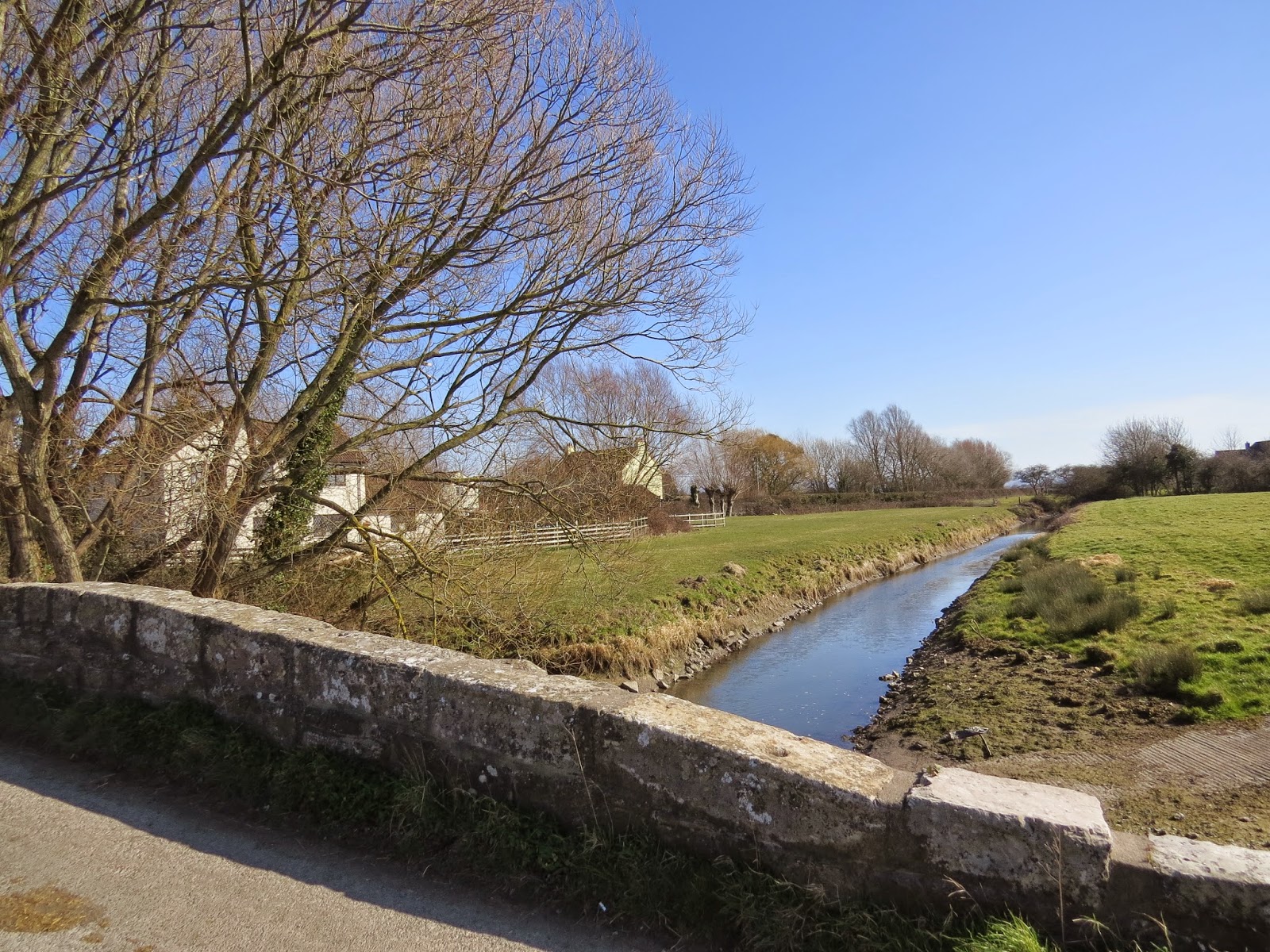 Image 17 : River Banwell again, surprisingly little birdlife today.
April the 4th then is the next photo day. Easter Saturday.
Posted by The Wessex Reiver at 22:28 3 comments: