Well after yesterday's excitement at Silverstone I spent a quiet day at home messing about with frames. I tend to buy frames in bulk, from a framer in Yeovil, or a framing factory in the North East when I'm up there. So I always have a fair stock in and paint to fit the frame...makes life much easier. Also for me I like to sell paintings at a reasonable price, having standard sizes of frame and mount, keeps the price down, so what one is paying for is the painting. 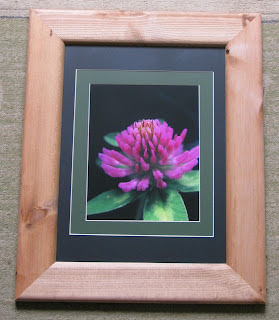 So today I was again looking at the frame and double mount I did for the clover picture I took in May. Do I still like it? I think so but I thought if I put it on the blog, comments may make me think again or give me ideas. Part of me thinks a square frame and mount may be better for this type of image. 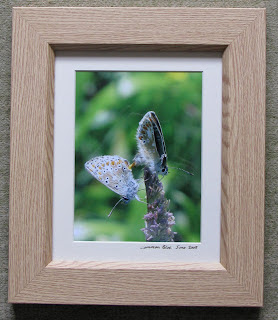 Anyway the last time I was up in the North East, I bought a job-lot of rejected 10 x 8 frames. They'd been rejected by a business so were a steal, not least as I haggled the price too. I've not used thick frames before, as in deep. So printed off a copy of the mating Common Blue butterflies I took in early June, and framed it with a China White mount. Would a darker mount be better? Costing this up, the finished version was just under £5, so if I say sold it for £20, then that's a 300% profit. Mind you who would want butterflies mating on their wall? And obviously if an original painting was in there, it would be slightly more expensive.

And that's really the thoughts of this posting. It's a well known fact that a good frame and the correct mount can make a painting really sing, conversely a bad frame and mount can destroy an image. I think this is why so many people who frame their work, play safe with pale frames and mount........ I know I do!

Email ThisBlogThis!Share to TwitterShare to FacebookShare to Pinterest
Labels: Frames