Very little wildlife watching this weekend, but gardening thoughts on my Gardening Blog. The weather though was odd, the rain didn't arrive, but we had strong wind, not as strong as my parents had. They'd been up to Rothbury in Northumberland looking to buy a house, and apparently they were in the middle of an autumnal storm. 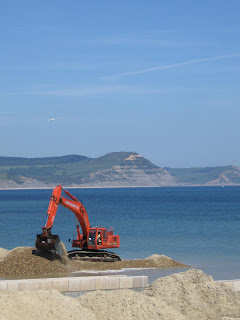 What the wind did do though is bring out wonderful aerial displays from both Hirundines and Gulls. As I drove back over the Mendips last night, Martins and Swallows were almost playing "chicken" with the car as they swooped and soared just feet above the road surface and under trees. Gulls were higher up but they seemed to be also enjoying just playing on wind.

So the above photograph is totally unrelated. This was in 2006 when the beach at Lyme Regis was re-built. I took quite a few arty photos at the time as the orange earth movers were, to me, like Dinosaurs in the Jurassic Coastline, overshadowing Golden Cap behind. So next time you go to Lyme Regis, remember that's 30,000 tonnes of French sand and 50,000 tonnes of gravel, dredged from the English channel you're walking on.

Also a couple of other bits of news. My photo on Tuesday's posting, the one with the horse and sunset was used as background on the Points West weather bulletin on Friday, which was nice.

And speaking of the meeja, those of you listening to Radio 4 tomorrow morning at 11, can hear about the doings of migration on World on the Move. I had lunch today with Brett the presenter and as ever, it's always a tonic... a real laugh a minute.