This week I had a wonderful surprise from a friend of mine. His wife had bought me a copy of This book. Published 2 years after William Barnes died, it is the three volumes of his "Dorset Dialect Poetry" in one volume. And it is a glorious read. 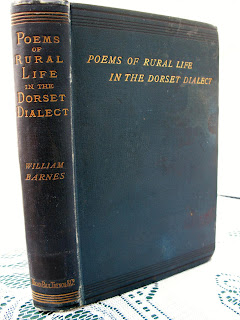 So why have I put this on my wildlife Blog? Well, William Barnes was one the most accomplished and intellectual poets of his time, and like Thomas Hardy, a good friend of his, deeply worried about the old traditions, customs, rural way of life and language of Dorset being lost forever. However because of the huge popularity of Thomas Hardy, Barnes has mostly been overshadowed, if not overlooked. Which is a real shame. So in my small way, I'd like to put him on the map.

Barnes produced something in the region of 800 poems, with his first volume of Dorset Dialect poems being published in 1844. He was born in 1801 in the Blackmoor Vale, at Bagber, about 2 miles from where I'm sitting. And during his 85 years, was a schoolmaster, poet and in later years ordained. When he died in 1886, the Saturday Review read:

'There is no doubt that he is the best pastoral poet we possess, the most sincere, the most genuine, the most theocritan; and that the dialect is but a very thin veil hiding from us some of the most delicate and finished verse written in our time.' 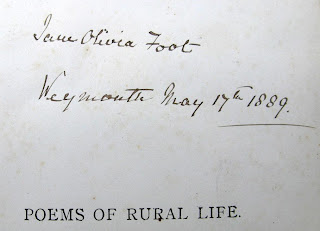 Which may explain why Jane Olivia Foot bought this book in 1889. I love inscriptions like this in books. Who was she? What did she think? Did she enjoy the book? I also have this sense of her sitting on May 17th 1889, with her new book, (maybe it was a present from a suitor?) dipping her pen in ink and writing her name. Little would she know that when sadly long dead, someone she never knew would read her words 119 years later, and most importantly remember her!

Far too many poems to show you, so I've chosen a "bird" subject. The Lark. Best to enlarge the photo to read, as because it's in dialect, not the easiest read. But just read it as it looks on the page. I hope you enjoy my drift through the mists of time to Victorian Dorset. 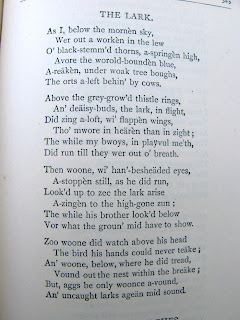