Sometimes a single thought inspires me to write, today that thought is simply lost or missed opportunities.

Out of the office window, I have this view. The camera, or at least my mobile phone camera never captures the intensity of colour. This purple beech tree looks stunning in the late October sunshine. As I watched the tree, individual leaves were falling to earth in the gentle breeze. Raucous jays frequent this tree regularly, their feathers perfectly reflecting this trees' leaves of many colours throughout the season.  It struck me that as I set off from home this morning, those leaves were on that tree, high, aloft, out of reach. Now as I dwell upon the view, they are shed, their work is done for this year. If I could only follow each leaf down I could pick it up as it landed, reflect in it's form, one single human contact in its short life. 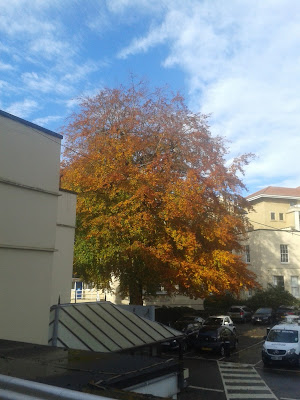 Observation struck me that I don't think I've ever seen a leaf detach itself from a tree. Countless are the times I've seen leaves blowing in the wind from the direction of a single tree, but never that absolute moment when the Rubicon is crossed, the attached detaches and is free, opportunities thereafter are limited much like a mayfly flying free for a brief moment in time.
With this in mind I spied a single leaf, on one of the highest branches. Fluttering flag-like in the breeze I observed for five or so minutes. It clung on to its branch, waving its resilience to changing atmospheric pressure. Inevitably work intervened, however when I returned to my observation just half an hour later, the leaf had gone. I'd missed that opportunity, that final sealing of the abscission layer, and the ejection of the leaf by its parent plant. And my wish to see it fall.  Somehow this felt like a metaphor for life, look away however briefly, and you will miss those opportunities presented to your field of vision.
I wonder how many leaves this tree will shed in the next 8 hours while I watch it? There is a steady confetti of movement. Three more in the time it took me to write that last sentence. I'm looking intently, the lower branches still thick with foliage gently sway in the gusty breeze. Suddenly there is a crackle of sound, branches oscillate to the gust, a dozen single leaves now fire off into the air like cadmium orange mayflies. Pirouetting almost as if the joy of freedom is too much, their hue is reflected against the intense blue sky, they dance higher before Earth's gravity inevitably draws them down, down out of sight, down to terra firma.
It is a childlike fascination watching this performance. Simple yet memorizing; equally as I gaze upwards I see new buds, short dagger shapes clinging firmly to the rapidly defoliating branch. In six months they too will be allowed to unfurl in their moment of glory. It will be May, they will bring a burst of fresh citrus green before darkening to that rich burgundy tone. The winter to come, now being ushered in by the breeze, will be over. The falling of the leaves is therefore not the end, simply the beginning of the next cycle in the natural world.
Posted by The Wessex Reiver at 12:56 No comments:

The condensed moisture of the atmosphere falling visibly in separate drops. 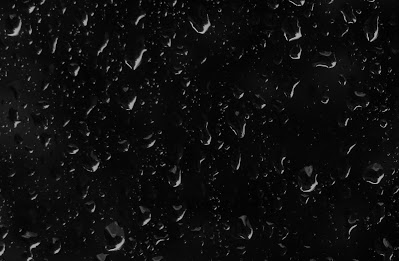 The Oxford English Dictionary describes rain thus : Noun :
The condensed moisture of the atmosphere falling visibly in separate drops.
Drill into the scientific literature and rain, rainfall and related meteorological phenomenon are all caught up with the water recycling on Earth that sustains life.
Or, as I did this October morning upon opening the curtains, the temptation is to close them again and return to the land of slumber, with an improving book. That though is missing the joy of rain. Sunshine lifts the spirits to many; for me rainfall energises. Why? I do not have the inclination to work that out, maybe a deep seated childhood memory, but for me rain and strong winds that often accompany these low pressure Autumnal systems simply energise something deep within, to be creative.
As I write this, the constant chatter of hundreds of raindrops drum out a pattern on the window, a constant musical accompaniment to my muse. For many damp weather brings to them the shadow of melancholy. I am the opposite, hot sunshine robs me of energy, creative energy. And while I do enjoy a summers day sunbathing by the coast, some of my best creative moments have been during tempestuous conditions outside. Whether they be paintings or writing, there is a wrapped up cosiness to rain that chisels inwards into my soul. It is sound. Those many raindrops providing the comforting jazz beat tenor, a rhythm, a beat, a swing to focus my dancing fingers over the keyboard. Wind driven rain blows a faster tempo to the rhythm, quiet moments times of reflective introspection.
This commentary arose while standing in the kitchen watching Julie planting bulbs in the greenhouse. Waiting for the kettle to boil, that mundane suburbia activity of life support, I watched the raindrops dribble down the glass, reflecting on the scene. Imagery can never recreate this scene in its whole, the frailty of summer scenes being ruled by the relentless weather of change. Wind buffeted in many directions. Raindrops thrown against the pane one moment, silence the next in readiness for the following tumult of precipitative energy. So enraptured became I that I forgot to make my coffee.  This giver of life, a simple dual combination of hydrogen and oxygen elements, brings also the process of recycling. Without rain, all life would stop, birth, life and death, death followed by decomposition in the afterlife, rebirth and reflection. 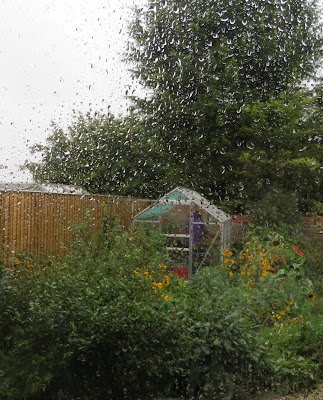 Thomas Hardy had an almost obsession with this cycle and recycle of life during and after death. Take for example his marvellous poem An Autumn Rain-Scene;
There trudges one to a merry-making
With sturdy swing,
On whom the rain comes down.
To fetch the saving medicament
Is another bent,
On whom the rain comes down.
One slowly drives his herd to the stall
Ere ill befall,
On whom the rain comes down.
This bears his missives of life and death
With quickening breath,
On whom the rain comes down.
One watches for signals of wreck or war
From the hill afar,
On whom the rain comes down.
No care if he gain a shelter or none,
Unhired moves on,
On whom the rain comes down.
And another knows nought of its chilling fall
Upon him aat all,
On whom the rain comes down.
On the surface here is an observer watching country folk about their business caught up in the machinations of the lead character, rain. Drill down under the surface and Hardy is here covering a lot of ground which creates walks of life. Merrymaking, medicament (medication or sickness), vigour, poverty and wealth, not forgetting melancholy and Hardy's favourite theme death. The poem ends with "knows nought of it's chilling fall". The poem is, for want of a better explanation, a scene from the grave. The six characters are dead and the rain allows the possibly recently deceased observer to assess his, or her own mortality, this day when - knows naught of its [rain] chilling fall.
Hardy repeatedly uses rain as a metaphor for melancholy and death, angst and lost love. It seems logical then that he too was inspired by this atmospheric precipitation falling to earth. I recall reading that triage of unrequited love Far From the Madding Crowd for the first time and being struck by a sub-scene which is one of the pivotal scenes to the novel. Bathsheba's servant Fanny Robin is buried in a paupers grave, however her erstwhile lover Francis Troy erects a gravestone, which overnight is destroyed by rainfall from the church gargoyle pouring onto it. Troy exits left, Bathsheba repairs the grave her ex lover erected for his former lover and diverts the gargoyle. Which love is it, Bathsheba for Troy, Troy for Fanny, Bathsheba for a wronged event the dismissal of Fanny, or just love based on doing the right thing. Powerful imagery the result of raindrops, lots of them.
Currently being repeated on Radio 4 is a factual-arts series called A British History of Weather, with the subtitle "During Wind and Rain". I have been involved with getting this repeat back on air through a little bit of fettling as we'd call it; the subtitle of this 2016 ten part series came from Hardy's own poem of the same name:
They sing their dearest songs—
He, she, all of them—yea,
Treble and tenor and bass,
And one to play;
With the candles mooning each face ...
Ah, no; the years O!
How the sick leaves reel down in throngs!
They clear the creeping moss—
Elders and juniors—aye,
Making the pathways neat
And the garden gay;
And they build a shady seat…
Ah, no; the years, the years;
See the white storm-birds wing across!
They are blithely breakfasting all—
Men and maidens—yea,
Under the summer tree,
With a glimpse of the bay,
While pet fowl come to the knee…
Ah, no; the years O!
And the rotten rose is ript from the wall.
They change to a high new house,
He, she, all of them—aye,
Clocks and carpets and chairs
On the lawn all day,
And brightest things that are theirs…
Ah, no; the years, the years;
Down their carved names the rain-drop ploughs.
Again we are in the mind of the observer, casting his or her mind back to a happy family. The final stanza is the catalyst to look back, remember those people whose names are inscribed on the gravestones in the graveyard. For that moment in time those who have departed are back with us, flesh and blood, alive and close enough to touch. Much as many of us do today with old family photographs.
Hardy was inspired by many things, with rain used as a metaphor throughout his work. To a much lesser extent rain allows my inner creative, albeit at a village craft tent level, to Hardy's Premier League National Treasure. I've not written for this blog since July, writers block or just laziness broken this weekend by Storm Alex and its thrashing tail of rainfall. That deluge of condensed moisture has recharged my little grey cells and the fingertips skip across the keyboard. The power of rain is amongst us all, I only hope the sun doesn't shine too soon, though when it does we may get a rainbow moment; rain is needed for this too.
Here goes.
There was a young man called Fred,
Through rain and puddles he tread
Wet through he was
Emigrated to Oz
In sunshine he now lays dead.
Posted by The Wessex Reiver at 14:11 No comments: