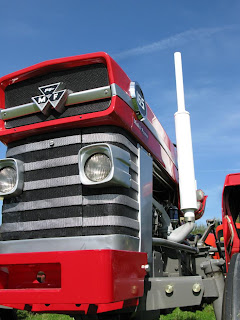 Vintage Tractors, Horse Ploughing and sons of the soil, all made for a grand old British event in the Somerset countryside yesterday.

The North Somerset Agricultural Society held yesterday its annual Ploughing Match. I wasn't there last year, but apparently it was a wash out and the day was abandoned. This year warm and sunny weather bathed the gloriously pastoral countryside of North Somerset in a ruddy glow. For those of you thinking, where on earth is North Somerset, well it's the top bit of what was originally Somerset until around 30 odd years ago when politicians decided to create Avon, and now following the disbandment of Unitary Authorities, it has returned to it's Somerset roots, but not quite. And explaining why not is a whole can of worms to be opened. 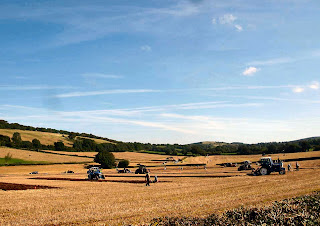 But this post is about ploughing, which for millennia has been the beginning of the agricultural season. Ploughing in my mind is a real link back to Man's desire to tame the land, grow crops and ultimately this created the British countryside all around us. I've always loved watching ploughing in action, even now when driving about if I see someone ploughing I will often stop and watch for a while. Something primeval is stirred in me as I watch the plough's coulter disc slice through the soil, followed simultaneously by the mouldoard turning that soil over in an almost animated way to leave shiny dark furrows of fresh soil exposed to the air. Watching a field of stubble slowly being brought under the plough is fascinating, I don't think I'll ever tire of that sight. And I wish I'd been taking part yesterday, rather than as a voyeur. 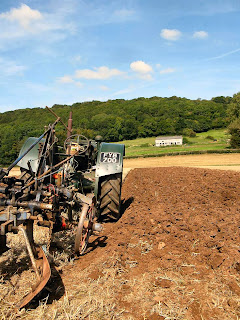 Ploughing matches however are about winning the competition and therefore not very relaxed for the competitors as continuous minute adjustments take place to ensure the perfect furrow is ploughed straight and true, with no trash (surface plant material) remaining visible. Seeing a perfect ploughed field is very satisfying as this chap below demonstrates, notice how contented he is with his work..... mind you he had just had his tummy tickled. 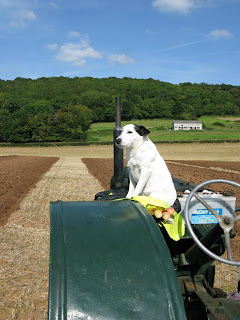 Yesterday 3 teams of horses were ploughing, always a great draw for the crowds. Numerous vintage tractors buzzed across the countryside like ants foraging for food, and worryingly tractors which are now seen as collectors items, but in reality are the ones which I drove as nowt-but-a-lad. Tempest fugit has a lot to answer for! And then there are the big modern semi-mounted 9 plough land grabbing monsters which can plough a field before breakfast.

In attendance also were country girls to watch the show, as this pole dancing friend of mine who I went with demonstrates. Shocking. 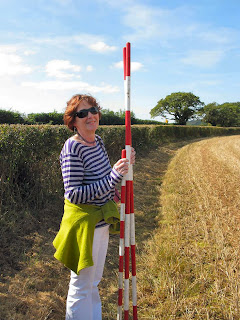 Enough, show us the horses I can hear you say. So ever to oblige here we go, the horses. 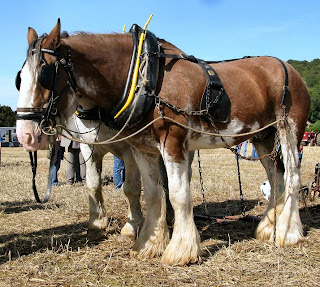 Sadly I can't remember the names of the horses as Olwen, the pole dancing country plough-girl, was talking to the owners and got some info on each team. Being a man and only interested in engines, I've forgotten what these two are called. 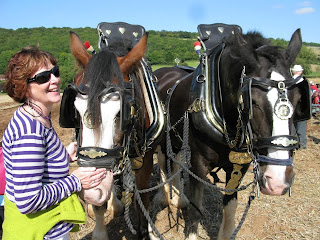 These two were called Sam and Poppet, I know that because they have name tags on. Thanks lads, that's helps an old man with a failing memory. 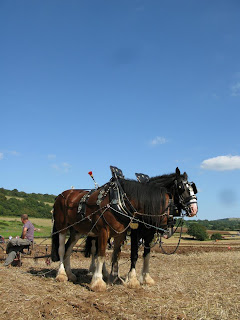 Time for a rest ! 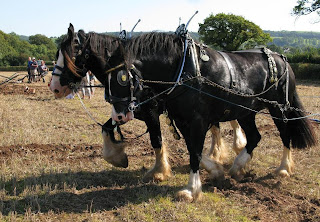 And they're off, sheer rippling muscle power. It is just stunning to see a man control two power horses like these and also the gentle nature of these gentle giants when at rest. Jethro Tull, that iconic folk-progressive-rock band fronted by a man playing a flute, wrote a wonderful song about heavy horses in 1978, containing a smatering of profound lines given what is happening these days with global warming and dwindling oil supplies.

They'll beg for your strength, your gentle power your noble grace and your bearing

And you'll strain once again to the sound of the gulls in the wake of the deep plough, sharing." 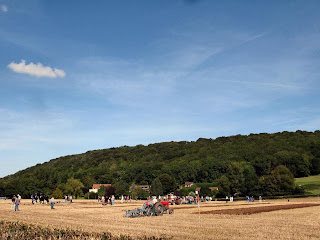 But let us not forget the tractor. 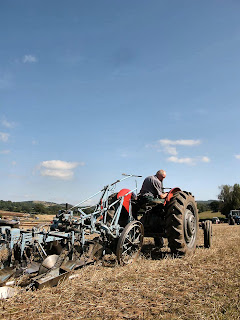 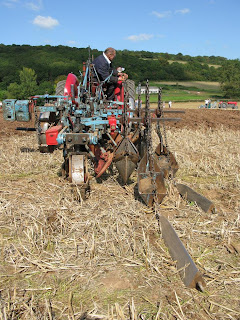 The kit and caboodle of a match plough. A tape measure is also a must to make sure the distances between ploughed and un-ploughed land are not too far apart to get a perfect finish. 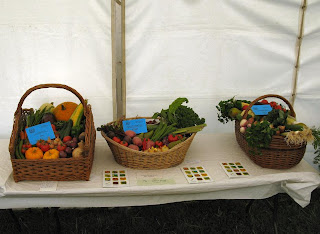 Although this was a ploughing match, a small village show was to be found in an adjacent field, usual produce, crafts and entries, but this one intrigued me. 'Produce in a Basket'. All three entries won first prize. Which is a first for me. 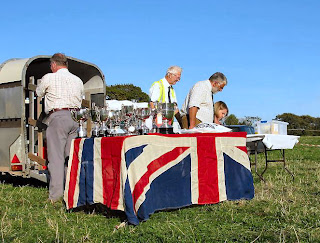 Eventually all this frenetic activity needs to be rewarded, after all, points mean prizes. We decided to watch the ceremony. Time was 4.15pm and the awards were due at about 5pm. So we found a sunny spot and sat and waited in the warm sun. By 5.30pm despite frantic tooings and froings behind the union flag nothing stirred. At 5.35, a microphone sprang into life informing the massed throng of boiler suits, grubby jeans and flat caps (and that's just the women) that in 5 minutes the awards will begin. At 5.55 pm, we were off....! I like being in the country, a country mile is about 3 days walk, and a country 5 minutes is at least 20 minutes.

The microphone crackled into life and the first awards were unleashed, complete with brown envelopes of prize money, silverware flashing in the evening sunlight, and a round of applause. However it seemed those at the back couldn't hear so the crowd were asked to step forward, plenty of room up here. This brought a surreal moment as on mass a silhouetted (we were sitting facing the sun) group of ploughmen shuffled forward inch by inch; individually not wishing to get too close, but as a group being lured by invitation closer by the chap in charge. And it reminded me of a Monty Python sketch, where inch by inch the attacking soldiers dared to get close enough to fight, but always with a worry on their face.

And for both Olwen and I, the awards ceremony, was the pinnacle of the day. It summed up Britain, village shows, meeting up with old friends, sitting in the sun, drinking cider, chatting, followed by watching ploughmen, there were women there but none ploughing, men who keep this country fed walking towards to table to get their prize. We could have been at any agricultural show anywhere in middle England, these modest men walked forward, many with limps or bent backs, faces red after decades of exposure to wind and sun, but all displaying a pride in what they do without having to shout about it as is the modern celebrity craze; it was unspoken, there behind their eyes just by looking at their faces. People to be honoured I feel.

And so the day came to an end and as we walked back to the car a book I read years ago came into my mind. "The Endless Furrow" by A.G.Street was first published in 1949 and is a fictional account of a "townsman's" drive and desire to own a piece of English land as a farmer, and the joy he felt when he finally got there and walked his fields.

Sums up perfectly what today was really all about - in my mind at least.