The forces of nature

Well I'm now slowly recovering from my 1000 mile dash across Britain in cars and trains, having travelled in 6 days, Bristol, Newcastle, Edinburgh, Hadrian's Wall, Bristol, Lyme Regis, Salisbury, Stonehenge and back to Lyme Regis.
By Tuesday, my visitors were safely back in London having a Capital time before their flight back to Canada. So The boy needed some R&R and relaxation, where better then than Lyme Regis. I'd quite happily live here. Busy in the summer but wonderful the rest of the year, and now Mark Hix has built a fish restaurant overlooking the Cobb, even more reason's to visit and sample his fare from the trough. 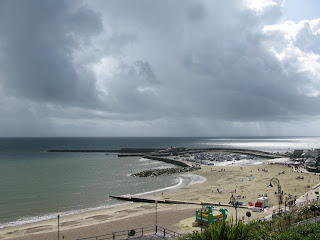 So on Tuesday, myself and a friend descended down to the coast. I'd been here on Saturday with my Canadian visitors and it was jammy packed with day-trippers, but today, though busy, space to breathe. Probably because it was raining. But there you go, we walked in drizzle from the car park, the clouds parted, the Cobb was bathed in sunlight and the rest of the day was gloriously sunny. 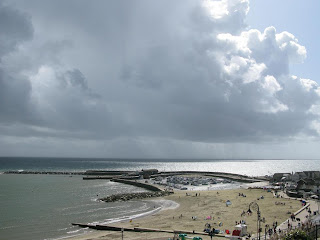 What these photo's do not show of course is the gale blowing in off the sea. The French sand used to rebuild Lyme beach after the storm of 1999 washed it away, is fine and pointy sharp. So as the wind whips it up and hurls it at passers by like myself, at 40 to 50 miles an hour, it doesn't half sting!! 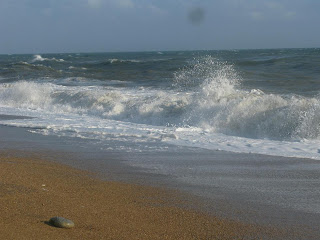 And it made me think, not for the first time, not a eureka moment, but just made me think. Here I was on a sunny beach on the first day of Autumn, the photographs made it look warm and inviting; when in reality it was stormy but very invigorating when stood on that transition zone between land and sea. It's not a new concept, but man is so useless against the elements. We think we can control, when in effect we have absolutely no control over anything this Earth has to throw at us. 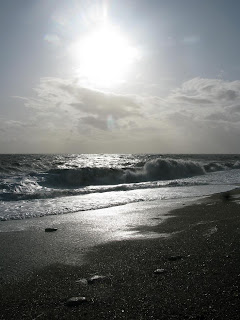 Taking these photographs on Hive beach, just along the coast from Lyme, one realises the power of the elements which make our planet work. I'm not a big fan of the hype around Climate Change. I agree completely the climate is changing, but prefer to think of climatic oscillation, a completely natural change brought about by the circulation of systems we really don't fully understand. Man is probably not helping, and is certainly polluting this wonderful Planet. I'm no expert, I am probably wrong, but I just can't believe driving cars and releasing Carbon makes that much difference in the grand scheme of things. 1500 years ago the climate was warm enough to grow crops on the Outer Hebrides, it then cooled, crops couldn't be grown, and now they are windswept, if glorious places to visit. I'll wait to be fully convinced what's happening now, is not part of a much bigger, and much older cycle of climatic changes which have happened across the millennia, but never recorded by man. And if you think; we're still technically in an Ice-Age, which logic says is a cool period in the Earth's history. So if it's a cool phase, there must be a warmer phase. 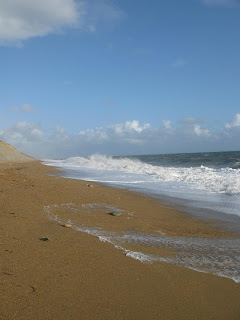 But I digress, with my personal views. What this posting is really about is the power of one of these Earth's elements, water, in the form of the sea. Actually it's about 2 elements, wind and water. The three photo's above were taken on Hive beach, and don't really show the other force, wind, in play other than crashing waves. But believe me I could hardly stand up. I have always been fascinated by wind. We can't see it, but we can feel it. We can't see the pressure differentials that cause air mass to move from one place to another, ergo to produce wind. But it's there, all the time and invisible and weightless, but has the power to move trillions of tonnes of sea water enough to produce waves. It's fascinating if you think about it, even if it did nearly blow me off the Cobb twice.

So a bit earlier in the day, back on the Cobb at Lyme Regis, at least these photographs showed what was actually going on. So a few images to gladden the heart of anyone who, like me, absolutely loves rough seas, extreme weather and storms ... well when viewed from the land of course. I've had enough rough ferry crossings in my days to make me a land lubber, the best being a force 9 from Arran, when we (as in the Ferry) had to divert south and out into the sea to rescue a capsized yacht. Rough wasn't the word I'd use that day, absolutely terrifying better describes it! And the carnage in the car decks afterwards was quite something. 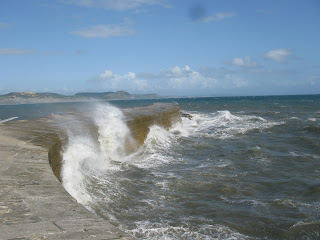 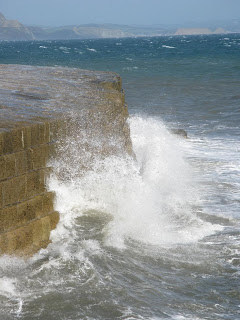 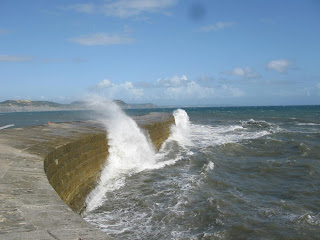 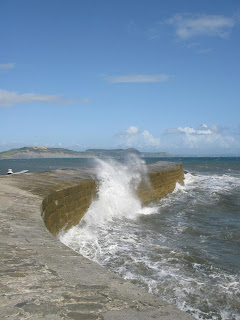 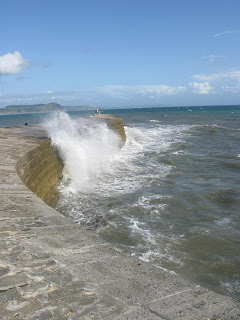 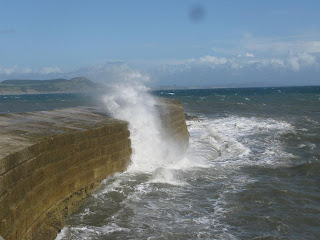 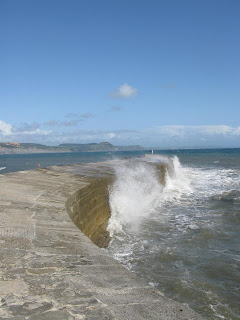 And finally, another element, earth. Or more accurately rocks. On Saturday I'd watched a guy called Adrian Gray perform his visual art pieces of Stone Balancing on Lyme beach. It was fascinating to see as he basically had a pair of pointed rocks and balanced them using nothing but gravity and friction. His website is here.

I love making stone sculptures on beaches everywhere I go, so I had to have a go myself on Hive beach. 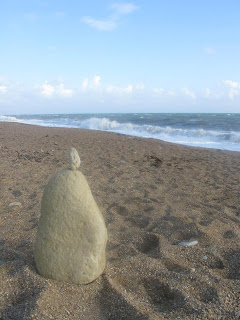 First attempt - okay I know what you're thinking. I thought the same. So I got a bigger stone. 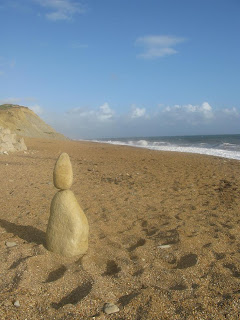 That's better. But I will practice this a few more times with more pointed stones. If you're very unlucky, some of these may end up on my sister blog.