Why do We Watch Wildlife?

Why do we watch wildlife? 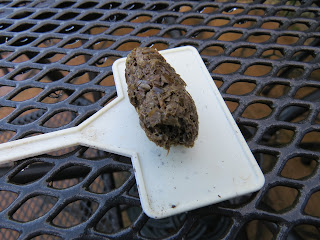 It is a question I've occasionally asked myself, often when the rain is dribbling down my neck, or I'm being buffeted by gales. What does observing something represent to the observer?

Take the above image, a carrion crow regurgitated pellet. Last autumn it was a wet and blustery day. As I idly looked out of the window a carrion crow landed on the wall. Unseen I watched this crow hop back and forth along the wall, bill wide open as if singing without a sound. Then its head began to lunge to and fro as if invisible strings were pulling it, before a dramatic convulsion and out popped this pellet onto the wall. After the crow had gone I collected it and while the pellet contained nothing more than cereal husk, those few moments of observing what for the bird was a commonplace experience, was for me fascinating.

The great mountaineer, naturalist and conservationist John Muir is often mis-quoted as saying "When one tugs at a single thing in nature, he finds it attached to the rest of the world". Which seems like the embryonic seed of our current mindfulness generation. However what he actually said in his 1911 book My First Summer in the Sierra, was " When we try to pick out anything by itself, we find it hitched to everything else in the universe." Which is a slightly wider remit of thought.

John Muir was writing about the summer he spent in 1869 in a new country. The Scotsman was newly arrived in America. He became a shepherd for a while in the California's Sierra Nevada Mountains and kept a diary, detailing everything he saw in that New World, which for him was a new world to observe. Notes from a diary matured as one of his most popular books.

I mention this as his words and those of many others have philosophised that in order to be a wildlife observer we need to retain that childlike fascination with the natural world. Although John Muir arrived in America as a man in his third decade, what he saw was new, he had to write it down. But he kept writing it down, and the best of the natural history writers keep writing it down. Even though a blackbird may have been seen in the same spot every day for weeks, today the nature observer sees it anew, and looks.

The germ of this conception manifested itself recently. In the last two weeks I have visited the Holford area of the Quantocks three times. Once by myself to reconnaissance possible sites and then with specific ideas in mind. My actual target was a tiny magpie coloured bird newly in from Africa, the pied flycatcher. Once a bogey bird of mine, last year I caught a brief glimpse, a first for me. This year I was throwing caution to the wind and going for the full Swarovski binoculars stereo vision with audio. Ficedula hypoleuca did not disappoint. 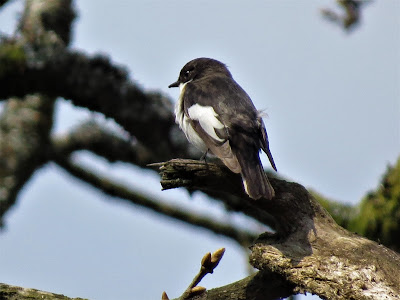 On all three occasions I've seen and heard the male bird holding territory. On my last visit on May 2nd, I spent a few minutes watching a male chase a female around an old gnarled tree. Like darting macro moths these small birds weaved and bobbed through the branches of the ancient oak woods,  accompanied by a chip chip chip call from the female bird once she'd alighted momentarily on a branch.

However although my target species was the pied flycatcher, everything else in these Somerset combes fascinated me. Some species I can recognise, most are an amnesia of lost knowledge. Lower down the Combe song thrush were plentiful. Mostly hidden from view their repeating song punched through the crisp air, loud, clear and amazingly far reaching. Willow warblers were everywhere, but on the last visit so too their relative the wood warbler. I watched a wood warbler singing. The text books say it sounds like a spinning coin on a marble slab. Maybe for some, for me it is simply a descending expulsion of ever decreasing notes, different to the willow warblers descending scale, but could be confused with a wren.

It was while watching the warblers a wren flew onto a holly branch just feet from me. I have seen thousands of wrens in my lifetime but this one fascinated me. Watch closely and as they sing, their whole body vibrates like a diminutive oscillating muffin. How they produce that penetrating sound is breath-taking (Biology bit : their vocal organ has a resonating chamber that utilises nearly all the air held in their lungs and can produce two notes simultaneously) but the physics of sound waves does not do justice to the joy of observing a familiar bird going bananas on its territory. So there I was, wood warbler, willow warbler, and wren all giving it some wellie in their territories in a small part of this wood.  For me watching that wren was the highlight. The warblers are wonderful, but often skulking in trees and let's be honest, they all look pretty much identical. But Troglodytes troglodytes forgoes it's cave name origin and stood loud and proud in the sunshine for all to see. 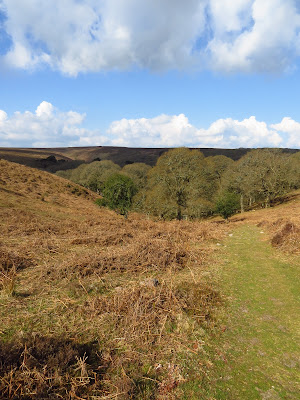 As did the cuckoo. Not one but a number of individual birds. I'd not heard a cuckoo this season, so the calls from several males in one landscape made the heart-bursting climb out of the magnificently named Slaughterhouse Combe worthwhile.  As we got lost a bit walking the myriad of paths of Lower Hare Knap hill, in the distance cuckoos began flying between the stunted holly trees dotted along the boundary between the oak woods and the moorland. Every year it startles me how big cuckoos are,  see a sparrowhawk, see a cuckoo. But actually cuckoo are ever so slightly longer, yet their distinctive posture, like an avian fairy on the Christmas tree, gives them away. Well the male at least.  Watched a pair dart back and forth between two hollies. The female cuckoo has that staccato bubbling call that I find hard to describe, it's like a barrel full of pixies singing the chorus of Bohemian Rhapsody while juggling. A remarkable sound I've not heard for nearly 10 years. They carried on with their ritual, if they saw me observing them they didn't care. 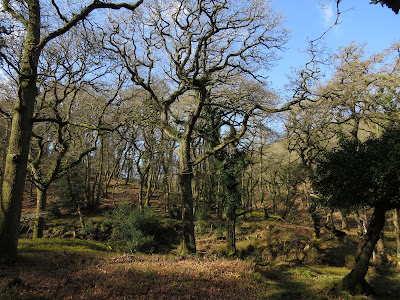 And that is possibly where the joy of nature-watching comes in. We are the intruder, to the world and daily existence of the species we see. It's not mindfulness for the species. It's not forest bathing for the birds, it is simple ecology. The habitat is there, nature will fill the niche, procreate and survive. And that I think is where the real emotions come from if I ask that question again "Why do we watch wildlife? "

As a child we absorb information and experience like a sponge. Everything is new and to be explored. As adults this childlike state already mentioned is often masked or dulled by the tedium of adult everyday life. The best nature writers revert to a childhood state. They observe, they note and they are fascinated by what is happening before them as if it is the first time they have ever seen that happen. They don't analyse what it means to them, the human observer, the best writers simply report species ecology at work.

I have enjoyed so much my three visits to the Quantocks. Even though I had a camera with me, I took very few photographs. Not the wren, not the wood warbler, not the cuckoo. For me it was the simple act of observing and remembering in my mind what happened that brought be joy. That's me. Others will disagree, good images or artwork are important to them, but for me I was happy to sit back and observe then walk away.

A friend asked this morning for some information on where I'd been with some pointers. So I produced the overlay below. Doing that took me back, I was there and I observed.... If you go down to the woods today, I hope you enjoy the experience as much as me, though I've forgotten to mention the lesser spotted woodpecker. Ahh well............."When we try to pick out anything by itself, we find it hitched to everything else in the universe." Thanks Google Earth for the image - the all seeing eye of the modern world. 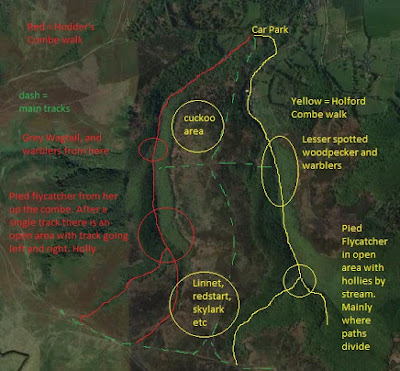