I have always loved New Years Day. Always a real sense of the year beginning, optimism abounds as we cast off the old and embrace the new horizons before us. Strange in a way as the cycle of years is entirely man made based on Celestial observations, and many cultures of course have a different annual cycle, different new years. Of course then today is no different to December 31st 2012 but that does not matter, as today, is a new day and it feels different to any other I've experienced.
My memory may also be playing me tricks but I can not recall a bad weather January 1st. A few have been iffy, not bad, but in my experience after the dark days of December and that feeling of being trapped inside because of Christmas the first day of the year has often broken fair and quite often mild.
﻿ 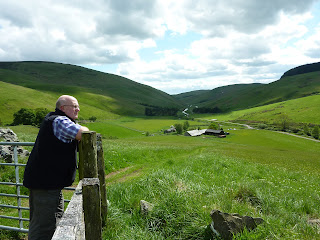 As I write this at 9am on New Years Day, I have already been serenaded by a robin calling its territorial call as dawn broke. In the fields behind the house, sheep are calling, gulls and corvids noisily feeding in the wet pasture, and house sparrows noisily at the feeders, I count 18 there today. Looking out of the office window there is not a cloud in the sky, sunlight is beginning to illuminate the willows in the hedgerows, Sand Point a rocky outcrop jutting into the Bristol Channel is the most luxurious of green and the moon is slowly fading from sight as sunlight gathers strength. All's well, it is always fine on New Years Day.
One thing I have observed these last few weeks is that a few people I know are picking up the quill to take up handwritten wildlife diaries for 2013. I know of 3 people who have said they have bought a diary specifically to write about nature. And I mean write. I love writing on the laptop as my jumble of consciousness can be easily corrected when re-reading it even I struggle to understand what was being said. But to write on paper is an altogether different thing and I admire their wish to do this.
I have long kept a diary, a maelstrom of things to do, weather snippetts and when time allowed commentary on nature or an event attended that day. I've never been able to write a diary though. Not on paper. Which is sad as my first forays into the world of nature writings came from the likes of BB who wrote every day. His book Indian Summer which I read in 1980 is a fascinating mix of the observed and his memory from a man at the end of his journey.
For me this is why diary writing is fascinating. Over time our mind plays tricks. For generations we have said the weather is not as good as it was "when I we'e a lad". Of course it isn't, not in our minds. As a child if it was sunny we'd play outside and fond memories of lying on golden sands in the sun dominate. If it was raining we'd probably be inside feeling miserable or like me, playing with my Action Man. I can recall walks along sunlit rivers in detail, watching fish gently swaying to the rivers flow. But can I remember what I did with my Action Man other than just know I had one? It is human nature to remember the good times, and obscure the bad, part of our Fight or Flight response.
And that is why diary writing is a wonderful thing to do. In February I went to see a master of diary writing Tony Benn. For decades he has written about the political turmoil and doings of Parliament. And now looking back, he has one of the most outstanding social documents of the 20th Century. Of course being a left wing politician, some would say his diaries were biased, but that is exactly the point. A good diarist can only ever present the facts and how they feel or observe them. Diarists can not write in the third person. Writing a diary is by its very nature a very personal experience, often for solo consumption. We are all biased  in our thoughts and comments and that has to be a good thing as the writer is setting a point of view on paper which some, but not all, will agree. Diversity, is what makes diary writing a joy to read, diversity is simply - being different.
I began this blog in 2007 as an attempt to write a diary. I have good years and bad years, based on time to sit down and write of an hour. Generally my efforts have been quite rewarding for me, and so for 2013, I too will endevour to make time to write more than of recent months.
The fascination of all this is that as human beings we are unique in the Animal Kingdom in that we can write down our thoughts for others to read. So for those of you about to begin what may become a lifelong writing tradition, I wish you well and I'll end with a quote from one of the best diarists of all time; Oscar Wilde,
I never travel without my diary. One should always have something sensational to read on the train
Posted by The Wessex Reiver at 09:47