Late Afternoon Walk To Check On The Crows

Time of day makes a huge difference to what is seen in the countryside. Earlier this week I wrote up on my hour or so walking and looking for corvids at lunchtime. Today I headed off on the same route though as the sun began to dip. My aim this time was to try and follow where the jackdaw head to at dusk. Their main jackdaw roost here is at Worlebury Woods about a mile away towards the sea. however a sizeable number of jackdaw head in the opposite direction at dusk and I've never managed to discover where they actually go. So with my work finished for the day half an hour before sunset I headed off into the cold. First corvid an obliging magpie. 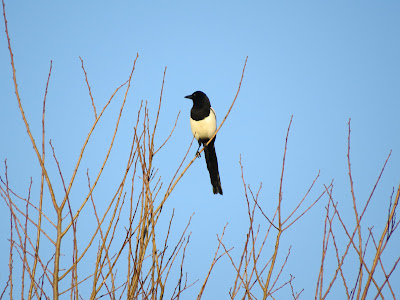 As usual once I reached 'Rogers' farm, the rook were loafing about. Earlier in the week the pairs were on the grassland today however they were paired up and loafing about on 'artificial trees'. I noticed a couple of single birds, but on closer inspection most rook were sitting tête-à-tête so to speak, simply enjoying the last of the sun on what had been a bright sunny but bitterly cold day. 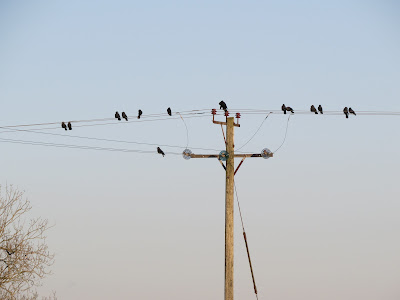 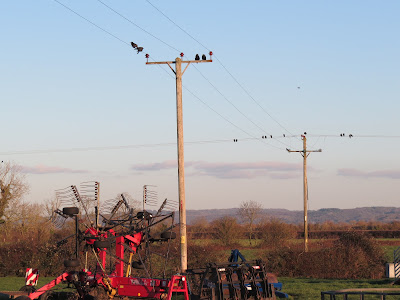 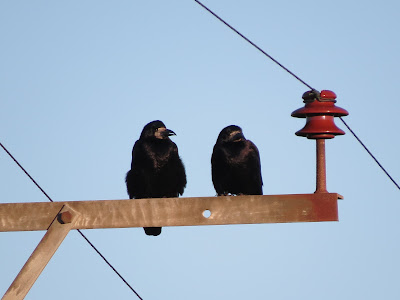 I could feel the temperature dropping with the sun and even at this late hour of the day, last night's frost remained gripped in shaded areas. The ground was hard. Difficult foraging conditions even for rook with their dagger like bill. If the ground is frozen even if they can stab through the surface, invertebrates will have retreated further down into the soil avoiding the frozen conditions. Luckily we don't get too many deep penetrating frosts here and the farm has many rhynes and waterways with exposed banks as emergency foraging areas. Just the other side of the farm more rook and jackdaw were arriving at favourite pre-roost trees, framed by the familiar bulk of Crook Peak on the Mendips in the distance. 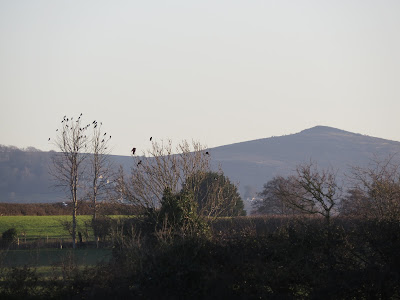 There was a lot of activity in the countryside though this was of a fleeting and noisy kind. I could hear carrion crow, rook and jackdaw busily contact-calling as they flew to and fro but very few stayed put on the grassland for very long. And that is the time of day. The days foraging will be over and by 4pm in mid-January it is all about preparing for the long night ahead, social calling, interactions and resting before flying to the roost. I walked on, past the chainsaws buzzing at the dew pond, and onto the church in the village. Only two jackdaw there when I arrived, and only one obliging enough for a half decent image. 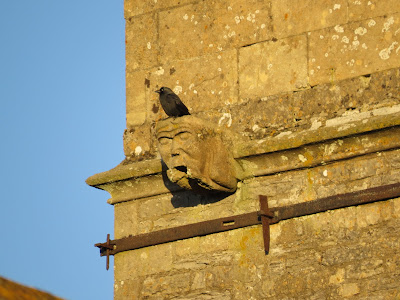 The sun was starting to set quickly now and I was beginning to feel the cold entering my bones. Cold sunny days have long fascinated me. Many is the time I'd look out of the house at the clear blue skies and think I'll head out for a few hours to watch wildlife. But really to observe wildlife involves being stationary for a long time and, even at these not that cold temperatures, a chill quickly will set in. Time to keep moving and wander back slowly in the hope the jackdaw will entertain me at around 4.30pm 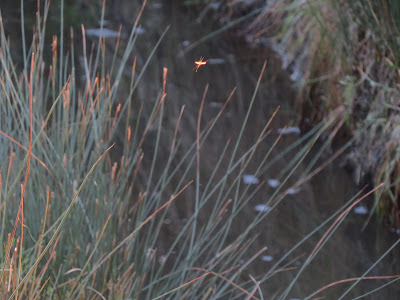 The low light was fabulous and by a newly installed footbridge I noticed half a dozen winter gnats flying, their delicate bodies picked up by the sun's rays. These probably were the males, buzzing about trying to attract a female, and are commonly seen in the winter months even on cold days as long as there is a nice sheltered area warmed by sunshine. A nice reminder life carries on all year. Other than the gnats and a mallard pair there wasn't much else about. 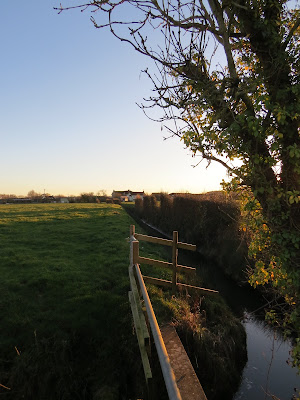 Further along the lane however a very obliging wren flicked and flitted through one of the lane hedges. I stood for ages watching this diminutive bird calling, each time its whole body would shake and shudder as it ushered that enormous song of theirs. 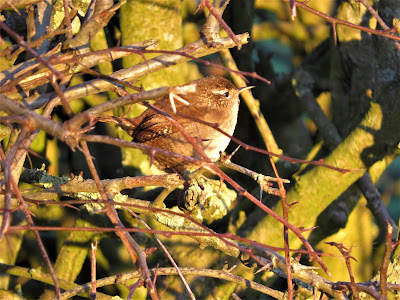 And while watching the wren, I noticed more rook coming in onto the favourite tree of theirs in the village. Light levels were really starting to fall now with the sky behind me turning a lovely salmon pink and blue colour. A light that signifies a cold night ahead for the wren then. 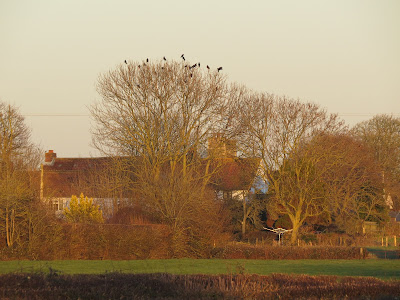 Those low level dusk hues are a photographer's dream and while this silhouette magpie is not making the most of the colours, I found the sepia background quite pleasing.  However although there were small groups of jackdaw milling about it was already 4.30pm and the main flocks had not materialised. Presumably they've taken a different flightpath today. I carried on walking until a feature I've been observing for a few years caught my eye, again. 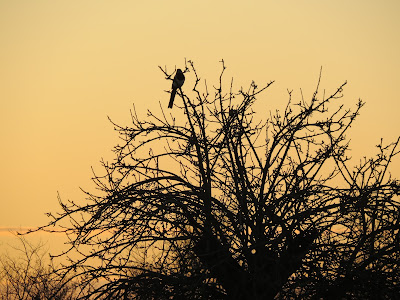 If I'm honest, I've no idea what is making these tracks, but they've been here for years.  I'd love this to to be otter as the track goes from the River Banwell next to the barn top right, across the field, under the fence, down the ditch, before they disappear over the lane, before re-emerging opposite, down another ditch and into the river again. A sort of semi-circle from river bank to river bank avoiding the bridge which is mid point. But I'm certain it isn't otter. While otter do cross open areas as a shortcut, and I've seen many such otter tracks before, they would probably use the river or bank itself. And I've never seen spraint by the bridge.
On closer inspection today there isn't any obvious footprints or tail marks either, in fact there's very little to go on at all.  It could be badger, though I can't find any hair on the fence or through the brambles on the opposite ditch, plus I don't know of a sett around here. Fox is a real possibility as this is very close to where the dead fox I spotted last week was, and there are a lot of foxes around here. Or even, and I wonder about this more and more, cat, as there is a large black cat often in the field hunting. What it needs is a trail-cam to solve the puzzle but as it is in a public area next to a lane I'm not sure the trail-cam would last very long. Food for thought, though thinking this through I'm going for fox without any evidence m'lud. 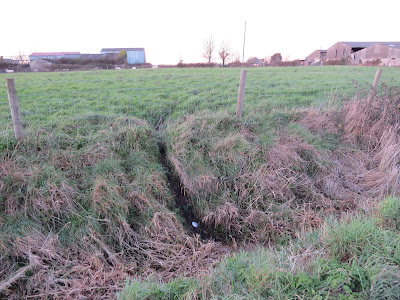 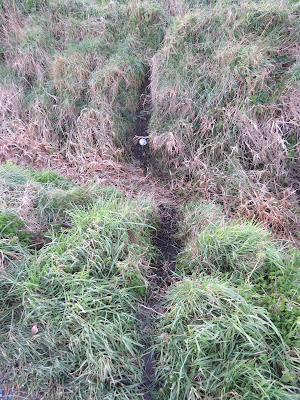 In the five minutes I'd spent looking at this animal track I was beginning to get quite chilled. The jackdaw hadn't materialised either, though a number of redwing and long tailed tit were a pleasant diversion. I decided to head home happy in myself that the nature of this area of North Somerset continues to entertain me. Just being out on a cold frosty day is enough to lift the heart. 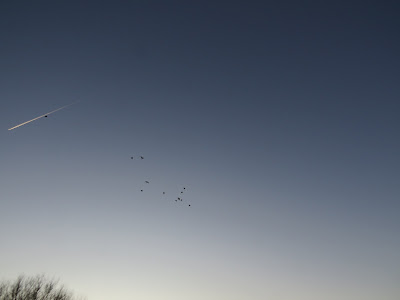 And then when I was almost home they appeared as if shapeshifters in the gathering dusk. The call came first of course, that jak - jackty- jak as they maintain social bonds in flight. Alerted to their arrival I managed a couple of quick images of groups of maybe a dozen or more birds flying quite high right over me in fairly quick succession. I checked my watch, 4.38pm. Of course, the days are lengthening and sunset is later by around 2 minutes a day now, so their 4.30pm passing the house on Tuesday was eight minutes later today. Lovely to observe as they sped overhead but I still don't know where they go from here. That's for yet another day of watching and waiting.
I can't wait, but I must remember time of day does make a difference to what is seen in the countryside. 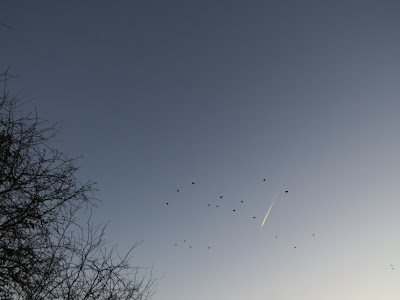