I've had a week off work, postponed from the end of September when I'd come down with covid. Having time to relax at this time of the year is a pleasurable experience, schools have returned after the summer vacation, the holiday season is winding down, therefore like today, we had the huge Steart Marshes re-wilding landscape pretty much to ourselves. 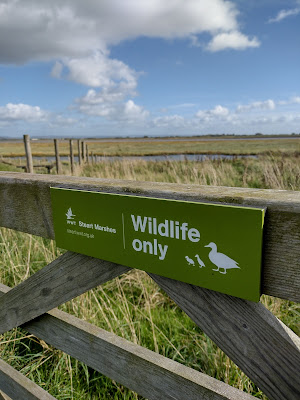 At just under 500 hectares this recently named super reserve is vast, and it is only the second time I've visited. Though saying that, I'm not being strictly accurate. I used to come here when it was simply Steart, a hotchpotch of farmed fields, freshwater rhynes filled with reeds, jutting into the Bristol Channel which battered it twice a day with its huge tidal surge. It felt then like a forgotten corner of Somerset, quite wild with a single track leading the visitor to a windswept pull-in of a car park as the tarmac petered out. It was empty of people other than birdwatchers and dog walkers and the odd farmer.  Birdwatching could be either exceptional or dire depending on the tides, seasons or weather. But that all changed around 15 years ago. 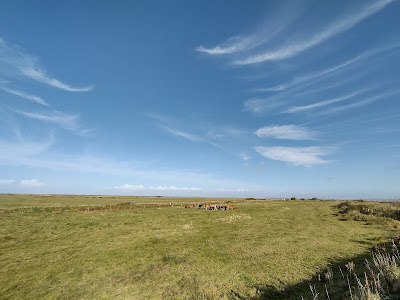 Climate change and rising sea levels were already having an impact along the Somerset coast. Following a storm in 1996 after a breach in the protective shingle ridge at Porlock, it was decided not to repair this damage as sea levels were rising, and allow the farmland behind the ridge to be sacrificed. Here at Steart, it was a more managed decision to sacrifice the farmland and let the sea take over in a more controlled way. Or put simply a massive landscape-based undertaking which after years of planning, nature mitigation, research and of course heavy machinery carving out channels, the plan was realised when the sea wall was deliberately breached in 2014 and the first tides flooded over what had been until then agricultural grassland. 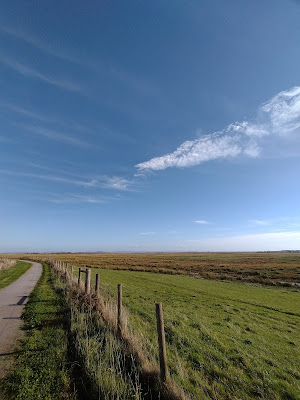 My last, indeed my only visit to Steart Marshes, had been in the winter of 2018. That day was cold, windy and for the return walk miserably wet. Today the sun shone, skies were blue and for mid October it was pleasantly warm. High tide was 11.25 hours. It's a four kilometres walk from the main car park to where the breach had been made on the banks of the River Parrett. Leaving it a little too late to arrive by high tide Julie and I set off on what was a rollicking scamper along the footpaths. Plan 'A' then was to get to the breach as quickly as possible, see what was happening then take our time on the return leg to observe any wildlife. Birdlife on the way to the hide was at best scarce, the highlight being skylarks singing on the wing as they drifted higher and higher. Unusual for October in my experience.  We got to the breach hide just after high tide, which today was not high enough to flood the landscape. 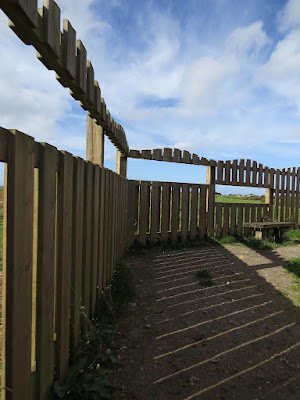 And when I said hide, it is simply a viewing screen with a couple of benches. The wind was quite strong now so the slatted structure provided a very welcome respite from the endless buffering. Wind we had plenty, birdlife very little. Actually this didn't matter. We'd hoped to see lapwing as Julie is trying to do a painting of these enigmatic waders, but we were here a bit too early in the autumn for the big flocks to have coalesced. In fact I only saw one wader the whole day, which aside from a flash of white along its tail as it flew into the sun could have been anything. There were however a lot of little egret and shelduck, the main incumbents of this new landscape I had read. 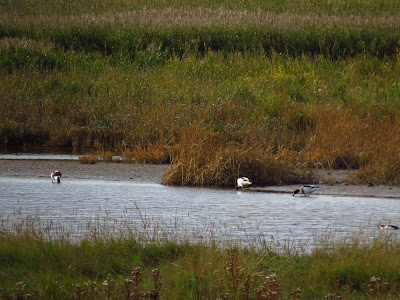 Everything was watchable through binoculars, but at a real distance for my camera (even the shelduck above were on a x 150 telephoto) and facing into the sun didn't help. I did spy a marsh harrier and buzzard at some distance, and a wren behind the screen, but in reality that was about it, other than the ever present meadow pipits and black headed gulls. But then one bird popped up, which still intrigues me. 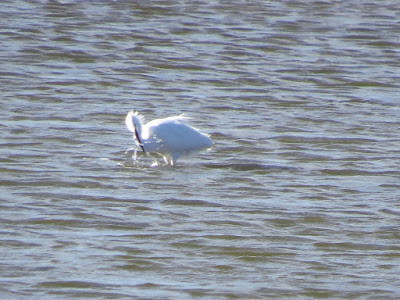 Stonechat or whinchat? I'm undecided. Initially I dismissed this as a female/immature stonechat when viewing it through the binoculars (it was about 100-150 m away). Of course a photograph was needed for this write-up which I took quickly without thinking. Later at home in the evening I looked a little closer. Hmmmm? female whinchat in winter plumage? The eye stripe is quite prominent. To that oracle then, Google. Big mistake. I descended into a rabbit hole of internet birdwatchers having the same difficulties. Questions asked, replies not definitive, seemingly the differences between female stonechat and female whinchat in winter garb, especially first winter females are subtle, obvious in a field guide, but in the field, tricky!  I think I'm erring towards whinchat, though the white covert might be stonechat... I don't know, if I'm wrong so be it, it brought joy anyway seeing it. 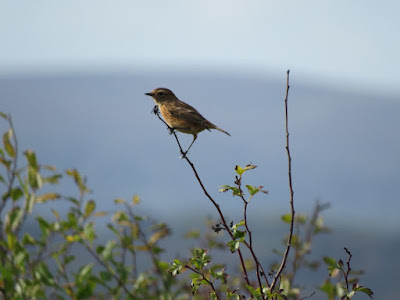 By now we'd been at the breach for about an hour. I'd been scanning a landscape mostly devoid of action, and while I scanned the horizon Julie sat on a seat by the hide sketching. The fact that there was so little birdlife was mostly my mis-timing of the season, wetlands are best in mid winter,  and partly my lack of knowledge of this site, assuming there'd be pools or scrapes with a smattering of waders. A mental note was then made to return here in December or January on a spring tide when the best views are to be had I believe. And I have to remember this is a developing landscape, it may take 20-30 or more years to find its ecological equilibrium. 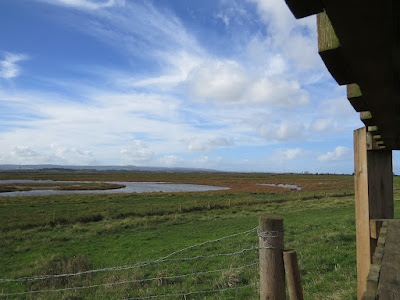 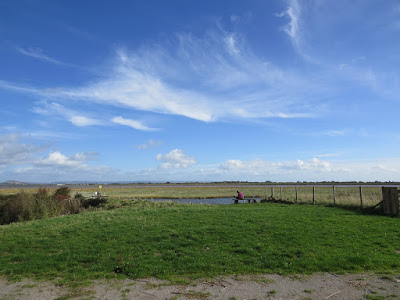 Julie's sketch completed, we walked at a more sedate pace back to the car park. It really is remarkable what's happened here in less that ten years. As we walked back, to our left were browning agricultural fields slowly reverting to saltmarsh. To our right the remaining agricultural fields, still being grazed and managed. The two separated by the cinder path provide complementary habitats. 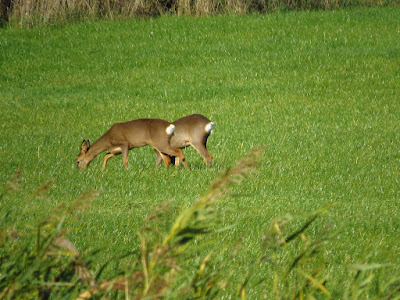 This trio of roe deer were in a farmed field, while the magpie sat on the boundary observing us with a suspicion only corvids have. 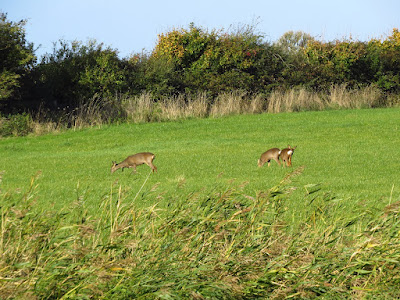 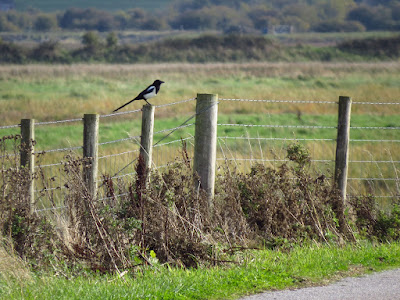 At one point we deviated off the reserve and looked out over the coffee coloured Bristol Channel which today was quite choppy in the wind. Adjacent to what was once the only car park here, a seat had optimistically been placed to look out over Hinckley Point Nuclear Power Station, and the works there to build the new reactor. A stark reminder that this whole coastline is man made and man managed, with the wildlife taking advantage of any work being undertaken 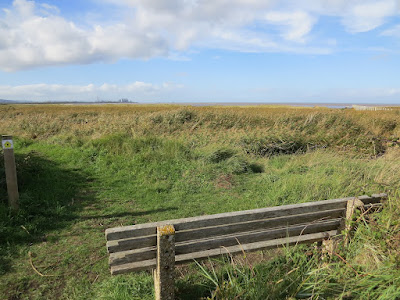 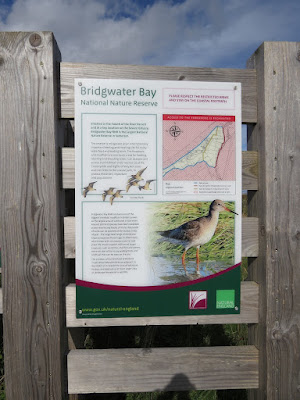 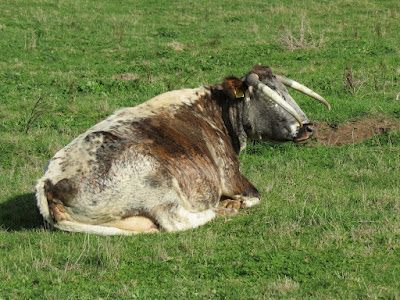 The sun was putting out some warmth now as we walked the 4 km back. This kestrel was over some fields and while not fabulous image, it pleased me as I took this hand-holding my camera on telephoto lens. Kestrels are such wonderful birds to observe. 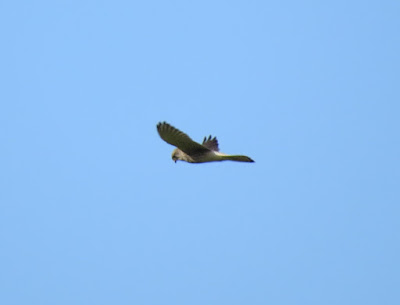 I began this with the fact that we had the huge Steart Marshes re-wilding landscape pretty much to ourselves. I think in the entire 4 hours we were here we only saw 4 people in the reserve, though there were a dozen or so cars parked up. However we did see hundreds of dragonflies. I'd been reading before we visited that Steart Marshes has recently been awarded a dragonfly hotspot status. Going on the numbers we saw today, I can understand that. Given this was October the 17th, everywhere we looked they were flying. Always too quick to photograph, I'd read the site is now home to 19 species. The star performance for us being these enveloped southern migrant hawkers. We watched them fly conjoined in front of us for quite a distance, before alighting on a blackthorn branch when they stayed for a few minutes before flying off, still conjoined. 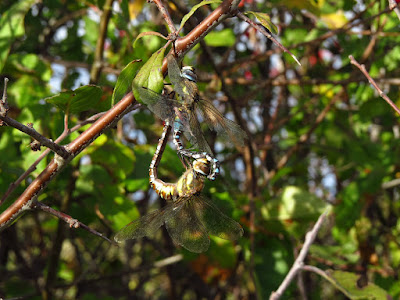 To see this landscape coming alive with increased biodiversity is a great achievement and result for what must have been thousands of hours of work, both in planning and implementation. It may have only been my second visit, but being 40 minutes from home it wont be my last this winter. Hopefully there'll be more birds next time though, and I hope as few people as here today.
Posted by The Wessex Reiver at 08:58