In Search of the Large Blue Butterfly.

The afternoon was hot. One of those mid summer days when the light is intense and without a gentle breeze, the air would be suffering and humid. I was heading towards the Somerset Wildlife Trust's Green Down Reserve. But first a steep climb up a stone track, taking breath to admire the dog rose in flower and then over and across a railway bridge and into the lower slopes of Green Down, a new reserve to me, near the village of Charlton Mackrell. 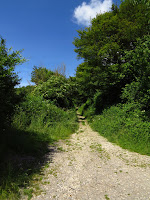 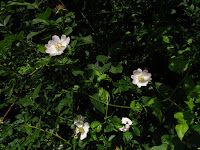 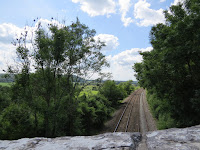 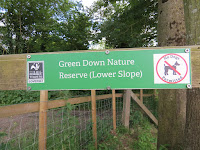 Way back a decade or so ago one evening I went to the famous, in butterfly terms, Daneway Banks Reserve up in Gloucestershire to watch large blue butterfly (Phengaris arion) larvae being released onto the site. I was there for work, recording an interview with the team there (sadly never broadcast). It was August, too late for the adults to be on the wing and while it was fantastic to see the larvae being released, I made a mental note then to either come back to Daneway, or at another reintroduction site see our rarest butterfly free flying for myself. Ten years later I found myself standing on a very steep limestone grassland slope, on a June afternoon. Expectation was high. 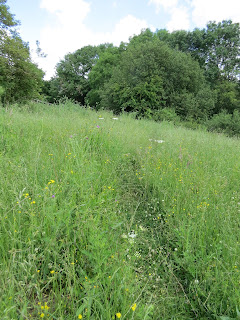 The large blue butterfly was always a localised southern species of butterfly, which I'd read (much like the Duke of Burgundy butterfly) surprises on first encounter in how small it is. Large in this case being the largest blue butterfly in Britain, though in reality it's virtually the same size as a common blue.  Struggling to keep going in the UK, by 1979 the large blue was declared extinct. Why this happened became a research discovery, principally by Dr Jeremy Thomas who unravelled its complicated life cycle involving Myrmica red ants, wild thyme (Thymus polytrichus) to feed on, sometimes wild marjoram (Origanum vulgare) to lay eggs on and warm, predominantly south facing well-drained unimproved, limestone preferred grasslands. No wonder it was a rare butterfly. 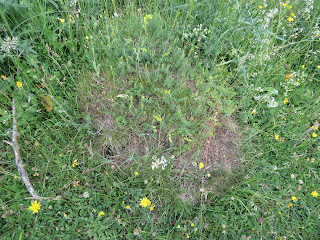 The first thing that I noted when entering this reserve was the absolute profusion of plants; and tell-tale signs of red ant mounds. Due to its topography, these 40+ degree steep slopes have never been improved for agriculture. Aside from a railway line as the southern boundary of the reserve, and the recently installed horse gallops splitting the higher and lower parts of the reserve in two, the site has remained a lightly grazed calcareous grassland for centuries. Everything was here, it made sense then to have this site as a re-introduction habitat for the large blue. 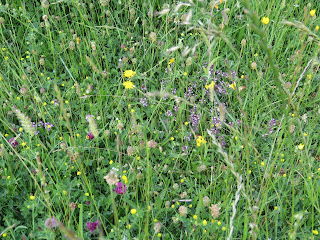 There is always a slight sense of jeopardy when visiting a new area to observe wildlife. Without a seasoned local guide we (my wife Julie and I) simply entered the gate and walked blindly along a visible but indistinct path through nettles and long grass. Soon though the nettles fell behind us and we were enclosed by the sweet smell of a summer wildflower grassland. Soft rose scents drifted by as we slowly walked along the thankfully flat path following the contours of the reserves 15 acres, making this a short half mile walk to the other end. Not a large site by any means but wonderful in the sun hearing chiffchaff, whitethroat, skylark and willow warbler provide a rhythm as the myriad of crickets and grasshopper at our feet provided the chorus. 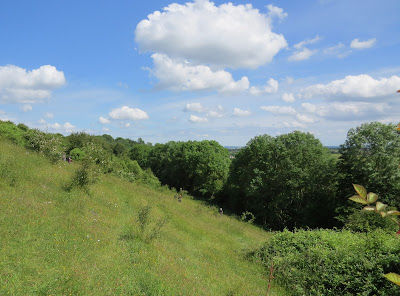 Despite this abundance of wildlife and of course the presence of the large blue (Green Down was noted in 2016 as holding the largest British population of large blue butterflies with over 153,000 eggs laid that year) we more or less had the reserve to ourselves. Maybe half a dozen other keen lepidopterists and us. We'd only gone a few paces into the 'good stuff' when I spied a labyrinth spider (Agelena labyrinthica) web, complete with its creator. This is one of those moments where I know what I'm seeing although I've never seen it before. Reading around natural history allows flotsam of fact to seep into the little grey cells and remain there awaiting its time to emerge. I could vaguely remember reading about these large labyrinth webs used by this spider to trap and feed on grasshoppers and crickets. As you could imagine to catch and especially hold onto such athletic and bulky insects isn't for the feint hearted arachnid and Agelena excels by building a strong sturdy trap that can’t be destroyed too easily. That's what I remembered from my memory, reading up about this spider later on I discovered "Agelenidae cobwebs are so strong and thickly woven that in the 16th century, monks in the Austrian Alps began layering them together to create tiny canvases for religious miniatures" 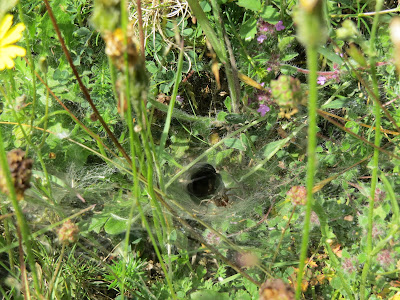 That was a nice find but only a few paces further on, Julie who was walking ahead of me called out, and there flying away from us, a large blue butterfly. The reserve has both common and large blue butterflies, but the colour and markings of the one we'd seen were unmistakable. Yet another moment of theoretical recognition. What was less enjoyable was that in the gentle breeze the butterfly disappeared quickly out of sight over a shrub in seconds. Was that to be it?
The large blue butterfly was reintroduced to Green Down in 1992 and for many years the reserve was closed to the public to allow the butterflies to gain a hold. Just a few miles to the north is Collard Hill, a much better known and since 2002 a well visited reintroduction site owned by the National Trust. But now Green Down is open to visitors, though like many fragile habitats I'd worry if it became too well known. 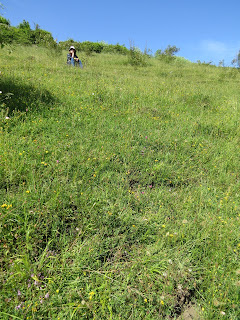 So far just the one sighting, therefore as we'd been on the reserve about half an hour when we thought we'd stop for a while and just watch and wait. No sooner had we done this than another large blue flew towards us, and yet again up over a shrub and out of sight. That's two, or was it the first one returning upon itself?
Coming towards us was a fellow butterfly watcher and after a brief conversation he confirmed what I'd already observed, namely that today the butterflies were highly mobile, never resting. I've seen marbled white butterflies many times across Wessex and they always pose for a photograph, but today these would just not keep still. Taking images was proving a challenge, a frustration and annoying. I packed my camera away and we slowly followed this chap along the path as he retraced his steps. When we finally caught up with him he was on his hands and knees trying to photograph, yes, a large blue butterfly. However each time he got to within a few feet of it, it flew a few feet away. We had the best view as the butterfly flew bit by bit towards us and I got some nice views in my binoculars when it was only a few feet away. Watching him struggle to capture that perfect image I just thought there's no point in trying,  my camera remained deep within my backpack.
While he was scrabbling about and failing to capture the perfect pose, a couple more large blue butterflies flew by which was amazing to see. They were also very mobile, never remaining on the ground for more than a second or two. Eventually this chap who I discovered was local and knew the site well also noted the flight period was about three weeks late due to the cold spring this year. He eventually gave up on trying to photograph this flighty individual and wandered off up the hill and like the butterflies, out of sight. Though before he left, he did show me a lovely image captured on his mobile phone and taken only half an hour before of the large blue with wings open. Perfect. I was happy, I'd seen them flying, I'd seen a nice image and that's why I'd come. Mission accomplished. 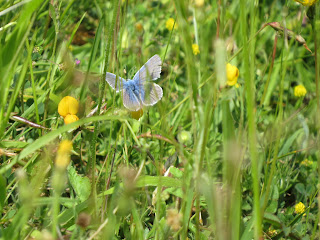 We were now on our own in the reserve. I took my camera out of my rucksack and for the next half an hour or so Julie sat and watched me messing about photographing anything that would stay still long enough, quite tricky with a long lens. I tried to capture some of the other butterflies around. Common blue, marbled white, meadow brown, but failed on the grasshoppers and couldn't be bothered to walk down a steep slope to where I heard a number of grizzled skipper were. Even the many pyramidal orchids were difficult - as unlike other visitors here today I wasn't prepared to trample all over the site just to get an image. Code is - leave the habitat undisturbed for the wildlife. 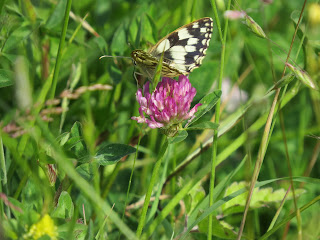 The large blue was first discovered (although it was possibly always here) in Britain in the 1790's and has always been considered a rarity. That rarity and the Victorian craze for collecting butterflies probably did the fatal damage blow to the survival of the indigenous large blue. During the 19th century lepidopterists became obsessed with having this species in their collections and over time located new colonies near Dover, on the Marlborough Downs and in Winchester in Wiltshire, Somerset, the Cotswold hills, south Devon, Buckinghamshire, and Northamptonshire. Becoming a trophy species, caught large blue's were often sold for substantial money. This pressure from collectors had a devastating effect and most colonies were cleaned out by collectors and by the 1950 only around 30 sites remained. Needing grasslands with short turf, the spread of myxomatosis in rabbit populations became the straw that broke the butterflies back. Grasslands became under-grazed due to a lack of rabbits, shrubs quickly grew and the microclimate became too cool to support the red ant. Post war agricultural improvements didn't help and by the 1970's only three colonies remained. By the end of that decade, it was game over. 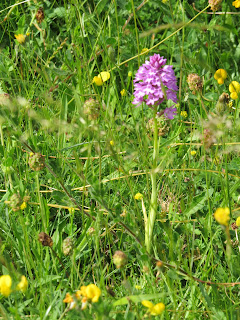 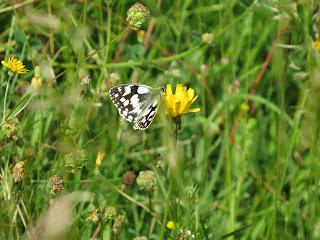 After about an hour and a half of wandering about in the intense sun I decided to call it a day. By now it was around 4.30 pm, Julie had already gone back to the car for some shade and the number of butterflies flying was reducing, despite the still warm sunshine. I'd seen half a dozen large blue butterflies on the wing although I'd failed to capture an image, but that didn't matter.
Except I had. Going through the images once I was back home, I saw this battered tatty blue butterfly. At the time when I'd taken the image the butterfly was 20 feet away and I thought it was a common blue, but looking at the underwing it is undoubtedly a large blue. Accidentally I had captured an image of what I'd come to see. Happy Days indeed. 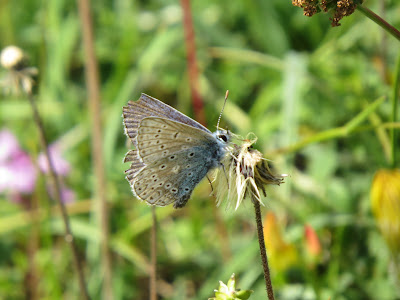