Wild Man Blues was a 1922 New Orleans blues instrumental by Jelly Roll Morton. And in ways it is hard to explain (I'll therefore refrain from doing so) this seemed apt for today's ramble through the glorious Mendip Hills. We listened and we said very little, watching wildlife all the time on the look out for the blues. The butterflies I mean. 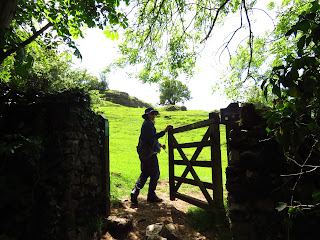 Near the village of Draycott lies a trio of nature reserves all around the ST500510 grid reference. Nestled high on the southern slopes of the Mendip Hills with bucolic views across the Avalonian landscape lies, firstly the Somerset Wildlife Trust reserve of Draycott Sleights.  Access to the other two sites on my radar today, owned by Butterfly Conservation, require a walk through this SWT reserve. First is Stoke Camp. At the far end of Stoke Camp lies Westbury Beacon, which today I didn't venture into but can be reached 500m away by crossing a grassy field. Westbury Beacon can wait another day however this all makes up a trio of important limestone grassland reserves. 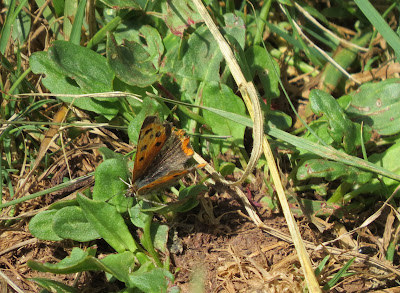 I'd set myself the task of heading down to Cerne Abbas in Dorset for a day with his grace the Duke of Burgundy. However for various reasons this has been postponed. Stoke Camp therefore came into my radar and only 40 minutes from home.  It is a reserve I've not visited previously, though after today's rambling across the hills, I shall return. No sooner had we entered Draycott Sleights then this quite worn Small Copper Lycaena phlaeas hove into view. Nice, but it was the blues I'd come to see. And I wasn't disappointed. 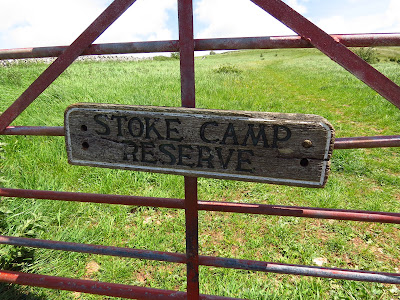 Chatting to a couple at leisure with their flask and sandwiches, one informed me the common blues were flying well, 'over the top by the gorse'. There was no getting away from it, a 45 degree climb was my only option. 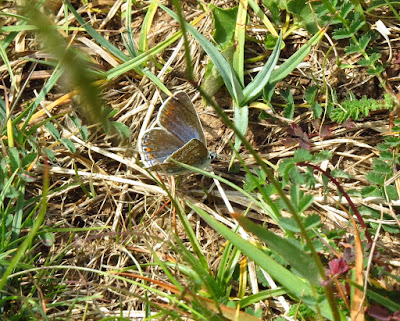 But it was worth it, and true the gentleman's word the track was alive with common blue butterflies, trios and quartets pirouetting in an embrace. Singles fluttering in the breeze, which at the top of the hill was more of a full on wind. Not ideal butterfly weather, sure it was sunny and warm but anything over 2 meters and your hat would blow off. 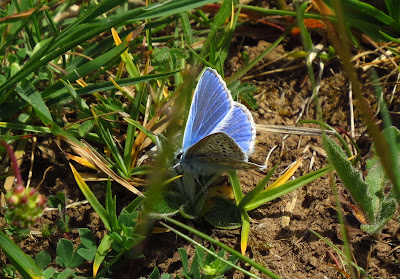 Luckily these absolute stunning common blues were not too bothered about the wind. Difficult to photograph as the airflow made them skittish. But having been given advice many years ago I was armed with my binoculars and a camera with a telephoto lens. For years I went out to watch butterflies, only to experience gathering annoyance in that each time I tried to get close, they'd fly off never to be seen again. Guidebooks and tutorials suggest get a butterfly net and chase after the little beasties. Well that was absolutely hopeless too. Then I met the great butterfly expert Matthew Oates, who was at the time the senior conservation adviser to the National Trust. I learnt a simple lesson from Matthew. Take a good pair of binoculars to watch them flying or when they come to land. There's no need to try and get close - or as he said

"...would you expect to get close to a bird? No you look at it through your bins. No difference in the world of Lepidoptera."

And then on the second bit of his advice, I bought myself a bridge camera with a very good x100 optical lens (which can digitally go to x200 and it's not bad indeed). All these images were taken 20-30 feet from the butterfly. Any closer they'd be off, but stand back and they will oblige with a stunning display. 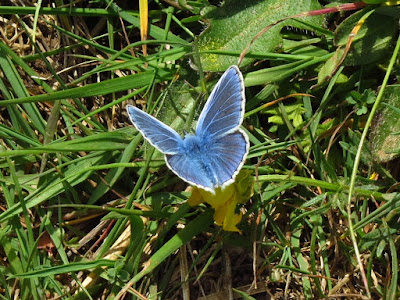 Now while there were many many common blues on the wing, until well into the search no small blues. Bought in the 1990's by Butterfly Conservation, Stoke Camp reserve was acquired for the conservation of small blue colonies, the larvae of which thrive here on a heady diet of kidney vetch happily growing here. Just a single small blue Cupido minimus today. And very nice too. 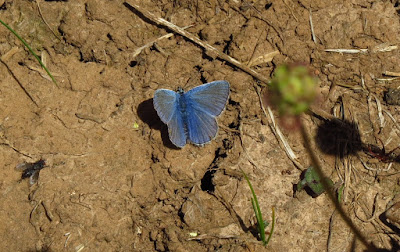 After a good hour watching these aerial blue jewels it was time to head back and up onto the Draycott Sleights reserve on the other side of the lane. On a day like today its 124 acres looked stunning from my vantage point at house grounds, a grazed part of the reserve home to many notable species. 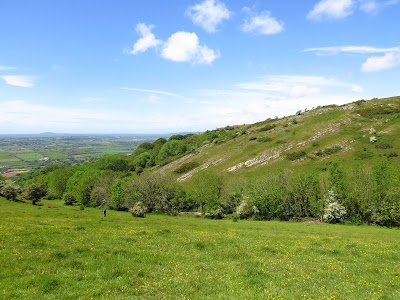 It gets me fit walking up and down the Mendips, though between the breathless moments, a number of butterflies made the slog worthwhile such as this small heath Coenonympha pamphilus, though quite worn. 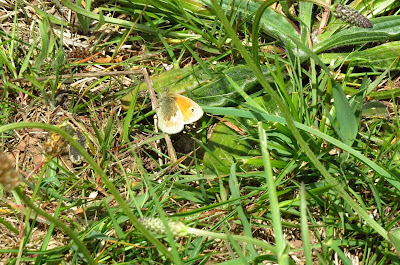 Reaching the high point it was time to sit and catch my breath. More common blues scurried past me and then a 'little brown job' 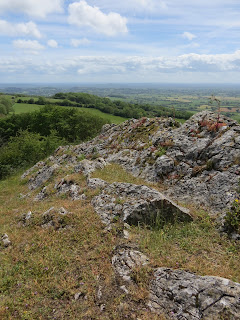 As previously noted I've learnt not to rush about chasing butterflies. Instead I sat on this rocky outcrop and focused on another outcrop 20 feet away. Binoculars scanning there it was, a wall butterfly, Lasiommata megera. A declining species these days has designated it UK BAP status for research, thus not a species I have seen many times. I was quite pleased with this photograph it has to be said, given the distance between sitter and subject. 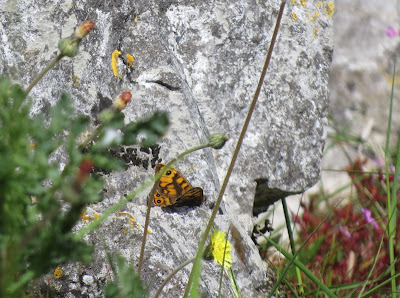 Almost immediately after taking this image a fluttering moth caught my eye. Skittish and seemingly unwilling to stay still for more than a second on the ground, I followed it for a quite a distance. Eventually when I did catch up with it, and get this single image, I thought it was a tiger moth. Which it is not.  Later at home I checked up what this was and it turns out to be a very tatty Wood Tiger Parasemia plantaginis. To the best of my knowledge this is a first for me. Sadly this specimen won't last long, part of its forewing was missing which may have explained why it was skittishly flying all over the place. Looking up the lifecycle this must be a male, as the females are largely nocturnal. Next time I'm here I'll look out for this lovely moth. 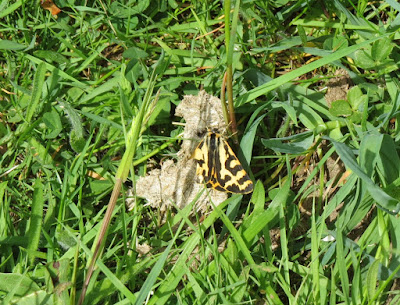 There is much more to say about this trio of reserves, the endless skylark chorus accompanying my Lepidopteran adventure, but that is all for another day.  Hopefully then my next visit will be as enjoyable as this Bank Holiday Monday in Somerset. 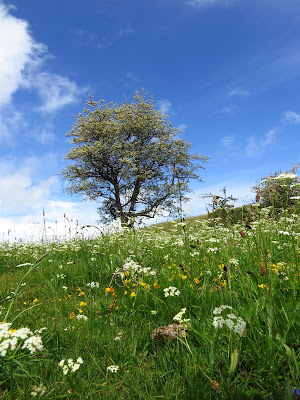