It is a hot Saturday in early May. Too hot for May 9th that's for sure. In the greenhouse the temperature is nudging 40oC, as I found to my cost while potting on some plants  - what's that phrase of Noel Coward's? Mad Dogs and Englishmen. It has been exceptionally dry too since the middle of March, save for a couple of wet days, blue skies have predominated.

I should maybe plagiarise that phrase and suggest Mad Cuckoos and Englishman today. For eight years the call of the cuckoo fell silent from the fields beyond the garden. Where once a regular harbinger of spring enlivened my waking slumbers, since 2012 that silence curtailing letters to The Times announcing its arrival. Spring; est arrivé!

Which has possibly been good news for the reed buntings and sedge warblers quietly at leisure in the rhynes (or water ditches) around this part of Somerset. Then around 11am the unmistakable call of the male 'cu-ckoo' to the left. Which was worrying. Ancient people thought upon first hearing the cuckoo to the left hand side was a portent of bad luck. However if it is heard from the right, good luck is sure to approach that day. Excellent. Then there is was again, with relief for my nervousness, louder, closer, over to my right. This male harbinger of spring was possibly on migration, as after maybe 10 renditions of the well known refrain, the quiet fields (incidentally title of a book by the author BB) returned. I shall however keep my ears open tomorrow and over the coming days, as no doubt the reed buntings will too. 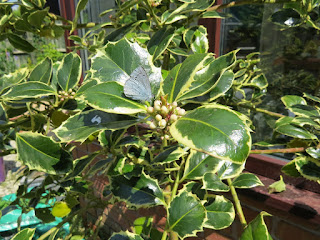 Two hours later, my good luck really did approach with reckless abandon. Post my heatstroke in the greenhouse and cuckoo calling excitement, I found myself at leisure with a coffee. Nature observation is about sitting still, observing and being inquisitive.  A male Orange Tip transfixed me for a while, seamlessly obsessed by feeding on one particular clump of forget-me-not. Then a flash of blue caught my eye.

Three or four years ago I bought two standard holly trees in a moment of reckless impulse buying. One languishes unceremoniously in a large pot by the house. The other fares slightly better in one of the borders. Neither is taller than 5 feet. Yet, since their arrival, holly blue butterflies Celastrina argiolus (pronounced  - sell-us-TRY-nuh ar-jee-OH-luss -) have arrived and more importantly remain resident in the garden. This was also helped by the fact the garden wall was covered in ivy. Until that is the council decided it was unsightly and cut it down. It slowly returns. You can find more about these fascinating blue butterflies elsewhere, but for the purposes of this narrative I'm interested in egg laying. 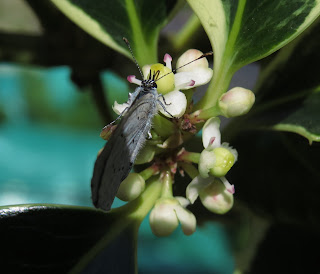 I watched this female from a distance. Long forgotten knowledge stored deep in the darkest recesses of my mind creaked into action. Internally it said she's egg laying. "Oh great" I said out loud. And so a discourse of sorts took place within me, an unavoidable madness exhibited by many wildlife watchers. Her flight pattern made me stop and observe. Around the pot bound holly she lazily flew, round and around, back and forth slowly reconnoitering the prickly plant just coming into flower. I had my camera with me. 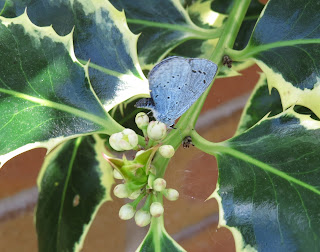 This lovely blue butterfly is increasing its range in the UK, moving north to the Scottish border. In-fact I observed a holly blue in my parents garden in South Tyneside in 2008, whose record was accepted as one of the first records that far north. Climate change is most probably having an effect in this expansion, coupled with a butterfly quite happily able to coexist amongst we humans, plus an ability to complete two distinct life-cycles a year. It's a positive time.

There are two subspecies of Celastrina argiolus. The one we have in the UK is subspecies britanna, the other argiolus is found in Europe, but not here.  The britanna subspecies of the holly blue  has a spring emergence which lays its eggs, as far as I'm aware, only on holly (Ilex spp.)  the food-plant to the emerging larva. That generation emerges in summer to lay its eggs predominantly on ivy (Hedera spp.)  but also dogwoods, (Cornus spp), spindle (Euonymus spp.) plus a few other plants that can play host. Re-engaging once more my long forgotten knowledge stored deep in the back of my mind, I concluded it was May (late spring) and so this was a spring female about to lay eggs on a holly plant. I moved in for a closer look. 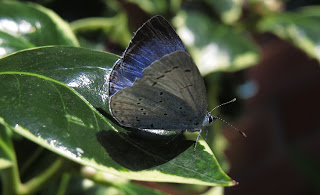 Have you ever tried to watch butterflies lay eggs? It is like juggling bananas while cycling in a hurricane. Poised statuesque-like in sunbaked temperatures, camera in hand I waited; in she flew, settled, flew off before I could move a muscle, wheeled back over me, settled again, flew off, then returned, wheeled off flying out of view and then frustratingly deposited and egg out of sight and then left stage right to repeat this merry dance in front of and around an Englishman (mad or otherwise).

I loved it, seconds became minutes, minutes became quarter hour, a half hour, and more. Wheeling and settling she came and still I'd failed to see an egg being laid. And that is the challenge, to observe requires patience.

My female, I shall call her my female, laid 4 eggs, then rested for a couple of minutes on a leaf, before laying 4 more eggs, ahead of another resting phase. A repeated cycle of egg laying and resting. It is thought females lay around 50 eggs over a few days, so my female had already lain a good proportion of her allotted clutch. Time to manfully have a go at capturing this on celluloid. 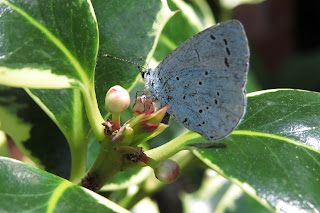 The gloriously pale duck egg blue-green eggs are lain singly on the stalk of the unopened flower. These eggs are tiny, maybe 3-5 mm and almost impossible to see. Even after watching her lower her abdomen and deposit an egg, it took me a few moments to actually find it on the flower stalk I was looking at intently. I've since added a marker to the stem and have highlighted the egg she laid in the above photograph in the image below. 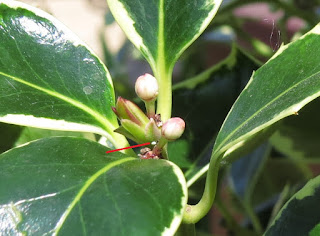 What larks. An hour had passed before I finally managed to 'almost' capture the egg laying process with the camera. In the image below she is laying an egg. She arrived so quickly I didn't have time to react with the camera even though I was as close as this image to her. The second image was taken moments later as I tried to adjust the angle, tried to get closer, before once more she flew off. The third image is identical to the second, only I've circled her flying off and the egg, circled in red. I love this image, the briefest moment in time which I shall remember for a long time to come.

So far I've located a handful of the eggs, but I know they're on that holly. The egg should 'hatch' a larva in a fortnight, and the whole process will begin anew.  I can't wait 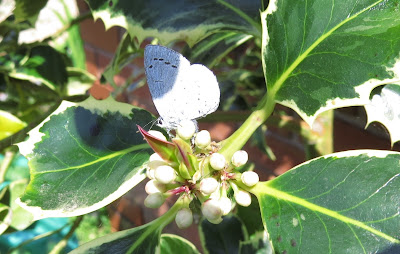 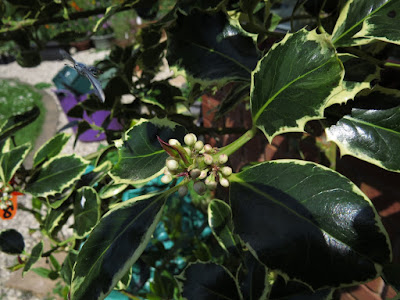 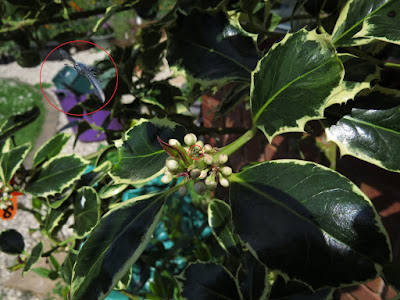 As Winnie the Pooh memorably said, "doing nothing often leads to the very best kind of something.". That was certainly the case today. My sitting doing nothing foretold an hour of captivating wildlife watching; or maybe the cuckoo knew something I didn't?

Wildlife watching, It's a kind of magic!

The Quiet Fields by BB on Goodreads. https://www.goodreads.com/book/show/4620749-the-quiet-fields