Beware of Dragons and Damsels

And so rang through my mind the morbid seeds of doubt after reading a reply to a number of images I'd submitted to my friend and one of the UK's best naturalists Brett Westwood. I have a lot to learn!

Despite the country being in lockdown for months due to the coronavirus pandemic, I have been working 5 sometimes 6 days a week throughout. Not that this was a problem, I have actually enjoyed the intoxication of working on my own in a building normally swarming with media rugrats. I am an only child. A phrase which explains everything.

Yet, during my free time, I observed a littering the posts from social media friends. A daily maelstrom of images, "we're having a fantastic time away from work", erupted confetti-like in my Facebook timeline. Everyone it seemed had time to stop and stare at the natural world on their doorstep (or Talking Pictures TV which has become a national institution). The Nation de-cluttered their gardens, built bird boxes, ponds, wildflower meadows, posted videos of sparrows on feeders as though this domestic bird was a rare migrant - What? We have all this nature in our garden? Never seen it before. This is great, and yes, it really is great. For years conservation has tried to get people to engage with wildlife, yet in 2020, it's taken a microscopic virus emanating from the natural world in China to kick-start the momentum. I hope it lasts and real good comes out of Covid-19

The penny finally dropped in late May when a great friend said to me on email - have you been enjoying the Self-Isolating Bird Club videos Chris Packham broadcasts live each morning.

Friend : "Really great broadcast about wildlife goes out around 9 am, I have my breakfast watching it"

The penny had dropped. While the nature watchers still in their pyjamas having breakfast were watching Chris and his step daughter (an excellent natural presenter) Megan pour forth tit-bits on well, all tits great, blue and coal, I was entombed in the office packing up yet another microphone to send to a contributor, presumably also in their pyjamas watching Chris Packham. Things had to change, and I'm not talking the purchase of pyjamas.

I was missing out of what was becoming one of the best springs in living memory. Endless blue skies, no traffic noise, warm too. Wildlife flourished through lack of human disturbance.  I, like millions of others, had observed in the garden. However I needed to get out there into the social distancing landscape of nature. A memo from on high stating we all need to take 2 weeks leave before September made me request 10 days off - not in a lump, but Wednesdays in June and July. I had no plan other than to step lightly outdoors every Wednesday for 8 weeks. I polished my boots and woggle. Anticipation was rife.

Which brings me to Dragonflies and Damselflies. My first couple of Wednesdays didn't involve too much wildlife watching, though a glorious day on Eggardon Hill watching butterflies while having a picnic serenaded by yellowhammer song was sublime. But then a couple of weeks ago my good friend Rob and I headed to the mighty Shapwick Complex on the Somerset Levels. Social distancing ourselves on the swamps, the quest that day was a dragonfly hunt. And very successful it was too.

So I was hooked. Three mosquito bitten hours on the Somerset Levels and an evening with various identification guides, I'd become a dragonfly hunter.

One thing I learnt many years ago when starting out in nature watching was, don't try and fight ignorance. It's all too easy to think every naturalist on earth knows everything about everything. There are a few who know a huge amount - Brett being one, Chris Packham another, but I could count many times over the days I've spent recording a radio programme with an expert on say spiders, only to find out they can't identify butterflies. It made me relax, It made me comfortable in saying to people - what's that? After all it is the only way to learn. 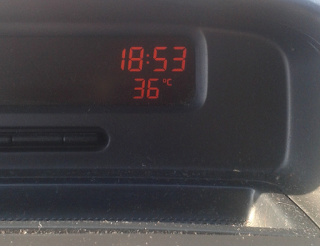 Thus as a newly formed dragonfly hunter, I needed a second outing, this time on my own. This quest a week later found me returned to Shapwick and during what was to become the hottest day of the year so far, the day was as we say down here "Proper job".

Returning to the car with my wife (who I believe only came along for the entertainment of watching me be eaten alive by bitey-things) we were a bedraggled and flagging pair despite having a fantastic time. No wonder - the temperature recorded at the car as we set off home at nearly 7pm was a chilly, 36oC. We'd been out in that for three hours all told. Dehydrated Dragonfly Madness!

But it was worth it!

But I still have a lot to learn. When I began writing this blog way back in 2008 smartphones and apps to identify wildlife were simply a technological pipe-dream. Yet on my trip out with Rob he produced a new app he'd recently uploaded, Seek. Very good it was too, here seen identifying peacock caterpillars on nettle. I tried to upload it onto my steam driven smart phone but the error message said 'please replace your phone with something that is newer'. It's only 6 years old, but having witnessed Seek in action, it's tempting to upgrade both the phone and my enjoyment outdoors.

There's still mileage though in good old fashioned identification books. This caterpillar intrigued me and after a bit of a flick through of my Boys Own Book of Creepy Crawlies, I thought it was a knot grass caterpillar. Popped it onto Facebook, and initially although some replies came back as a vapourer moth which I'd already dismissed in my semi-ignorant way, this hairy behemoth turned out to be exactly what I'd identified. A knot-grass moth caterpillar. Wow - I'm learning.

I have another 4 Wednesdays as leave during July and can't wait to get out again.  There is nothing like being absorbed for hours with wildlife. On that hot Wednesday as I slowly cooked myself a fetching shade of rouge,  I became enveloped in a soundscape of crickets, insect buzzing, birdsong accompanied by the regular zzzz zzzz of a big emperor dragonfly quartering the streams just inches from me. I'll be sad when Lock-Down ends, and may have to seek other avenues of adventure.
Posted by The Wessex Reiver at 13:17