November has a sound; silence 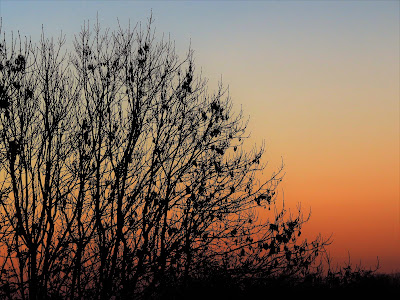 Is there a sound to November? Or do I mean the month of November has its own sounds? I'm not sure as for me the dominant sound in November is silence. The dominant feeling stillness. On reflection November has a sound that no other month has. It is hard to explain but then on one day I realise that November has arrived.
In his book The Quiet Fields, the writer BB describes this beautifully in his entry for November 2nd. He begins: [page 175]

"The sudden arrival of true winter has taken me unawares. It seems only yesterday that the sun shone with warmth enough to tempt a late tortoiseshell to the fading Michaelmas daisies...."

" Standing on the lawn this early evening - watching the last sad yellow leaves of the birches drift down to the dark sepia brown of the pond, I had a sudden surge of excitement that winter is almost here again - maybe it was an almost animal awareness hard to explain.... "

This still silent sound of the eleventh month appears as if by osmosis. A time when autumn has almost forgotten why it exists. Is winter here yet? Not quite, but I've lost interest and need to slow down. The sound of silence is accompanied by stillness which provides the release of an emotional connection in me at this time of the year. It's an emotion I love so much.

Even in late October, although the days are short, the sun may still shine strong and warm, the last of the summer migrant birds are heading south, too soon yet for their winter replacements. In October the remnants of summer bounty cling on in the hedgerow larder, keeping harsh winter at bay much as lichen does on the lee of an exposed mountain wall. Then, on a single day, a day no official diary will note, the feeling changes. November is still autumn yet it cloaks this season of mellow fruitfulness with a quiet veil of wintertide.

As BB himself did 40 years ago I found myself, just a few days ago, standing in the garden at dusk. The silence alerted me to the suggestion of stillness. In reality it was already there, it waited patiently for me to notice it. The countryside felt suddenly expanded, opened out, my hearing became distant, as if the ambiance of silence was coming from somewhere unseen in the far distance. Of course partly this is a lack of foliage in November. October storms have laid bare many trees, the air has less to resit its passing than in high summer when the rustle of leaves dominates. But there was not a breath in the air, not a bird song, nothing, just November's presence.

Moments earlier a weak yellow sun falling towards the horizon shone beneath steel grey clouds which had dominated the sky all day. For a minute or so, just beyond the garden, the yellow leaves of a field maple were illuminated into a fire-glow of colour. But what a colour! As only witnessed in November pale buttermilk hues, with the intensity of a watercolour wash, lit every branch, before, as if by the flick of a switch, the sun fell to earth. The sky itself now took centre stage, creating its own emulsion of orange and indigo; the countryside equivalent of following the harmonious suggestions of an artists colour wheel. Larger trees were now silhouetted, contrasting with the vibrancy beyond. Slowly that hue faded as dusk advanced, indigo deepened and I observed all was quiet, all was still, all was very November.

A few days later, a number of starlings are chattering on the roof. Not the urgent banter of spring when all efforts focus towards raising a successful brood or two. In November their toil is over, simply the relaxed contact calls of adults and offspring,  like a gaggle of gossiping farmers in the auction mart weighing up cattle. Wheezes, shwees, sqwarks, high pitched rapid fire rattling chat, responding replies, all cascade from the rooftop. They nest and roost in the eves of the house and though I can't see them, there may be half a dozen birds. Starlings chatter and bicker all year of course, but in November their constant communication throws me back to winters in Newcastle, a time when thousands of starlings would come in to roost high above the Christmas shoppers below in Northumberland Street. As a child I would listen to this deafening chorus in amazement, a sound way  higher than the passing traffic, not knowing I was witnessing something which no longer occurs. Today town roosts are a thing of the past as health and safety took over the cleansing of the streets via the netting of the rooves.

Winter has always been my birdwatching season. Maybe that is it, my November moment, my own animal awareness triggered possibly with the first seep seep of redwing flying unseen overhead in a starlit sky, their calls heralding the glory days of winter wildlife watching to come.